The sleet is coming down here, and supposedly, by morning, we'll have layers of ice and snow on the ground. It's not supposed to do this in the South in March. I'm so over stupid winter weather. Anyway, I'm about to hunker down in my warm house with some movies, and if things get as bad as they say, I may be trapped in the house again for a few days.

At least that means I'll have time to do some cooking tomorrow. My life has been all about the convenience food for a couple weeks now since February was exceptionally busy. When I have time to cook, I usually take leftovers to work for lunch, but lately, I've been relying on stuff like this awesome Super Burrito from Trader Joe's (scored on a recent trip to Nashville). It had quinoa, sweet potatoes, and kale. Very good. I'll stock up on these next time I'm near a TJ's. 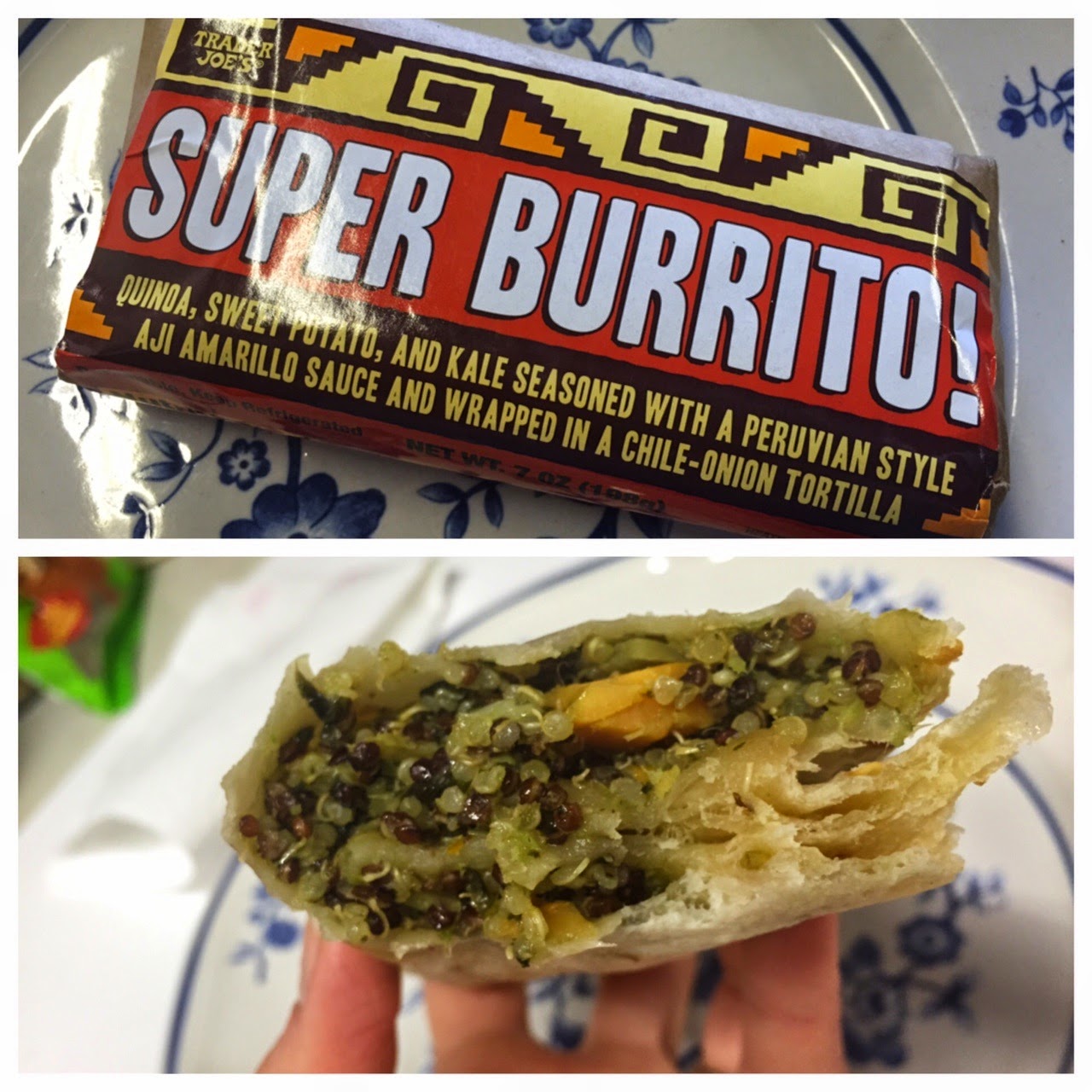 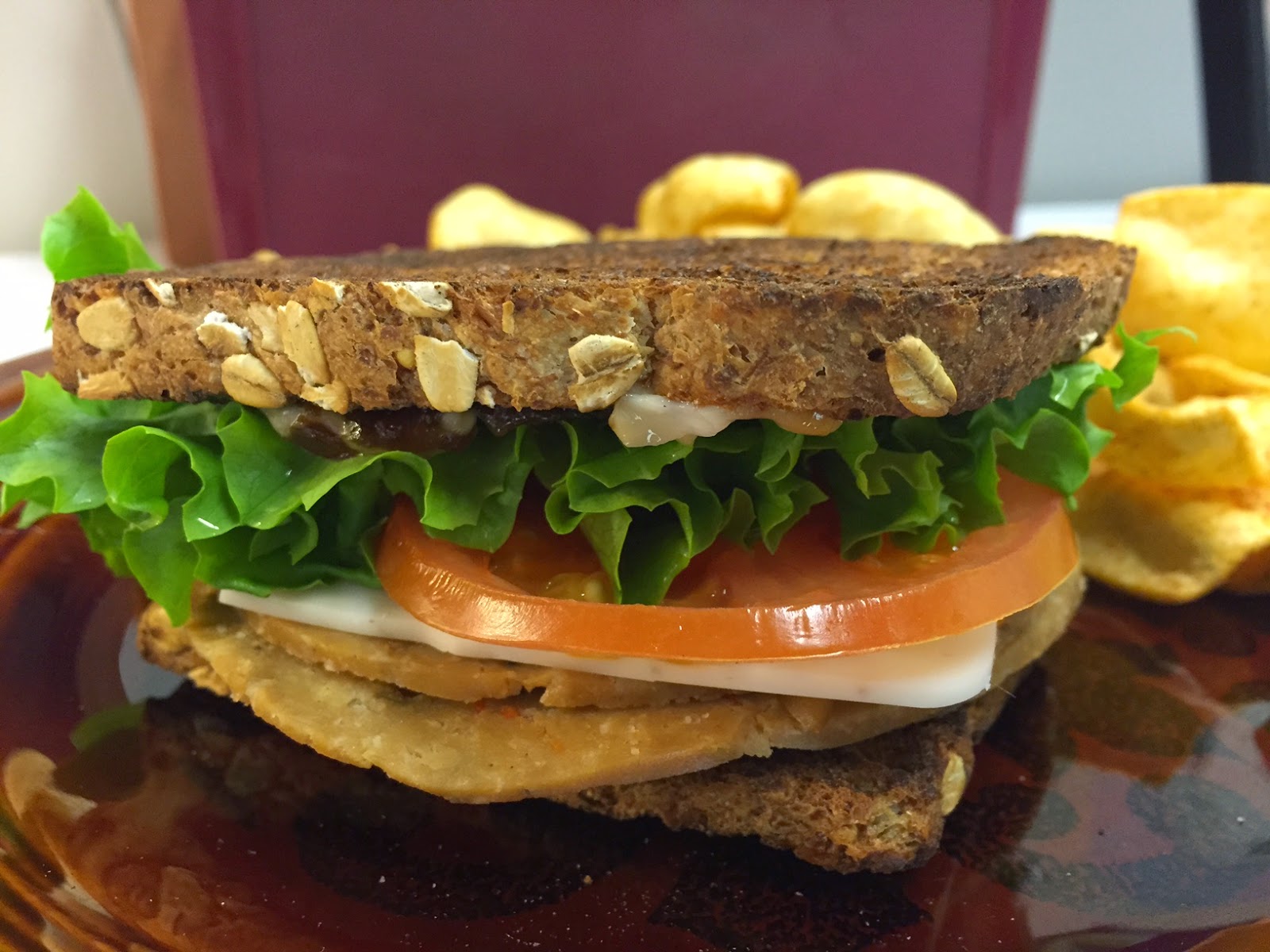 Also been loving these Gardein Chick'n Sliders!! When I was a kid, my neighbor's mom would pick us up from school everyday, and we'd always stop by KFC for Chicken Littles on the way home. Add a little vegan mayo to these Gardein sliders, and they taste JUST LIKE CHICKEN LITTLES! 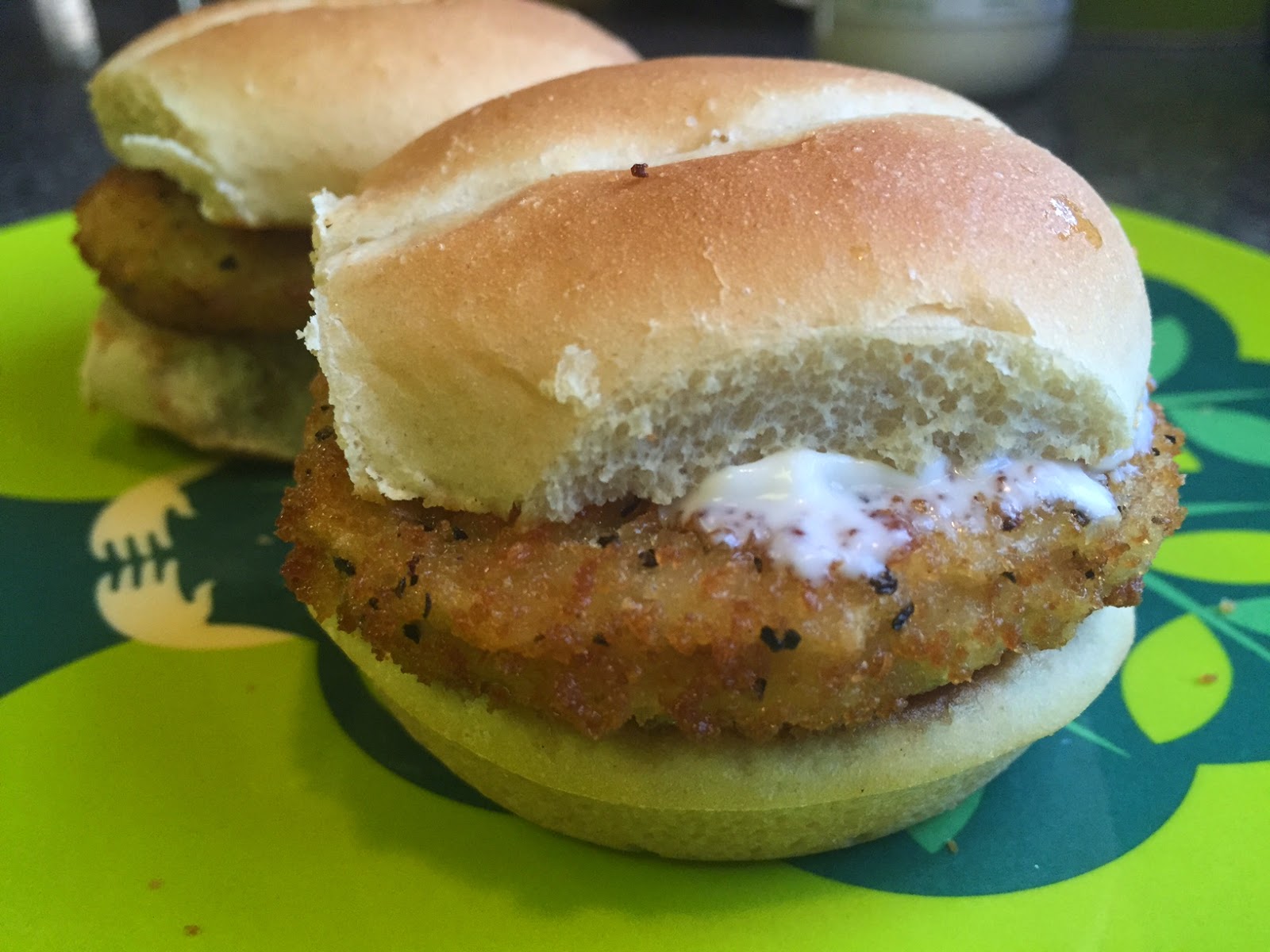 Breakfasts have been pretty convenient too. One of my current faves is Silk Soy Yogurt topped with Dang Coconut Chips. Coconut chips were just made for yogurt! They really were! 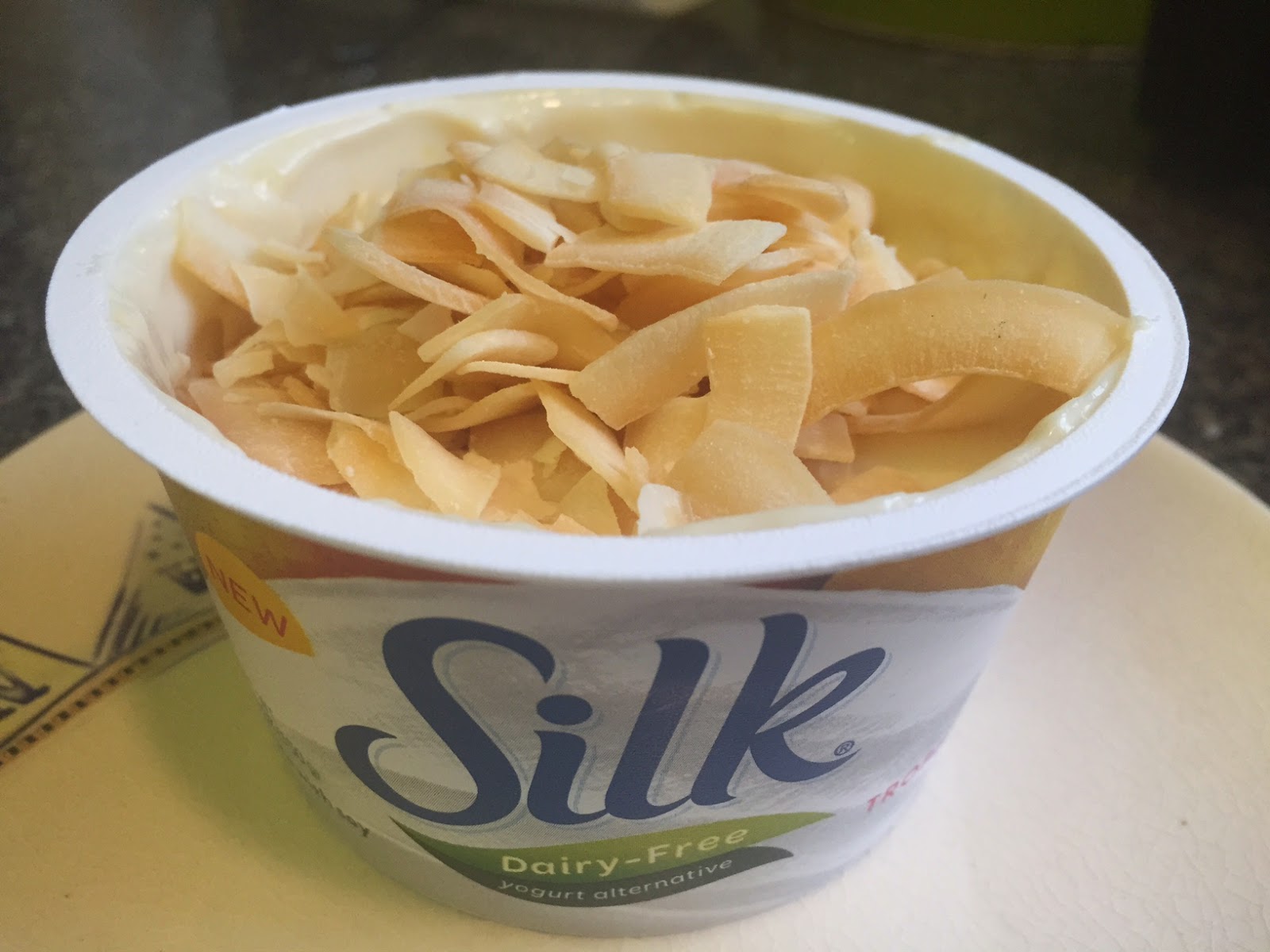 But I have been eating a little homemade stuff! Like my all-time favorite breakfast of Vegan Tofu Cottage Cheese and Marmite on Sprouted Grain Toast. The recipe for the cottage cheese is in Cookin' Crunk, and Stephanie brought me the Marmite back from England. 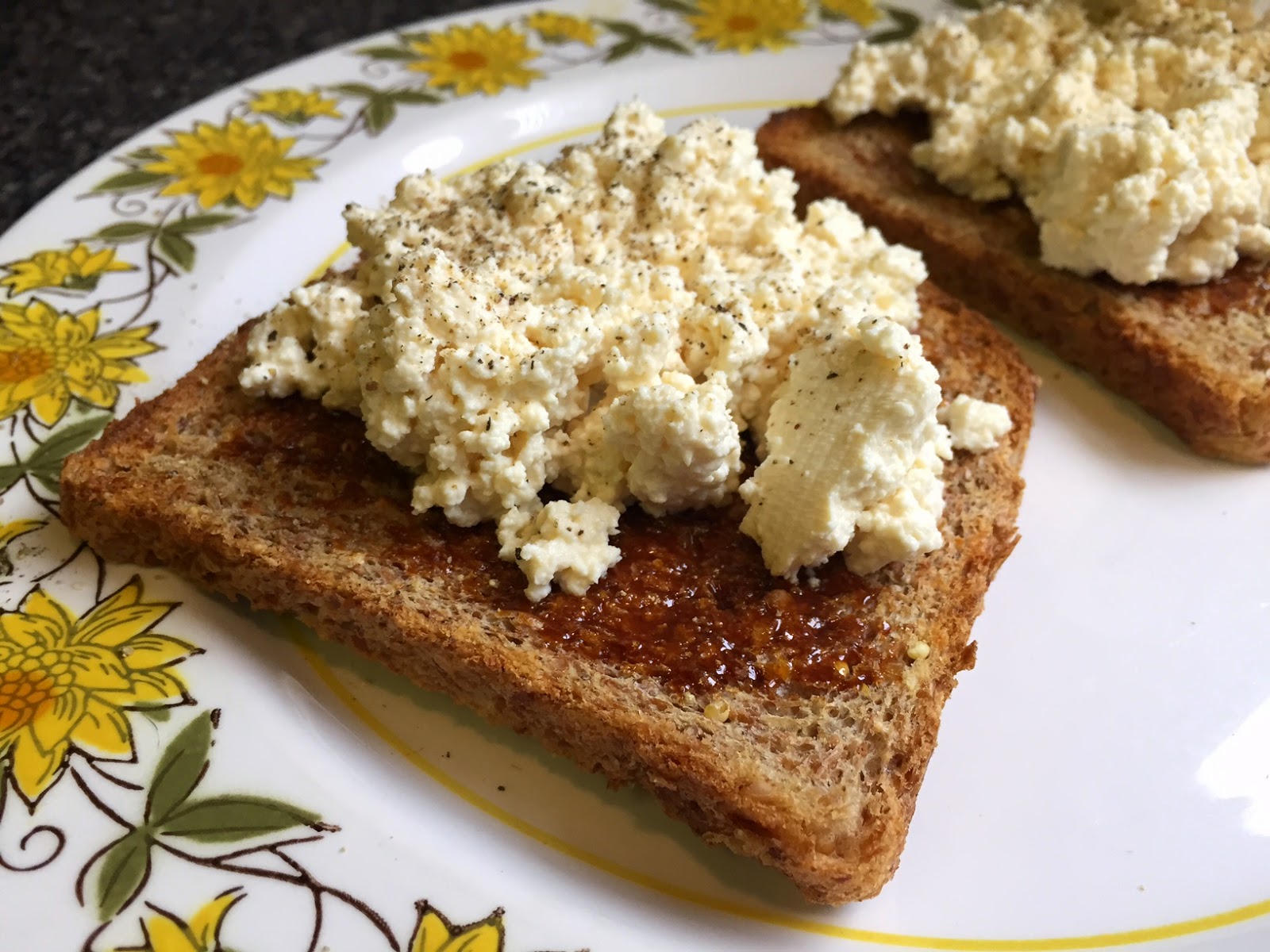 After my last long training run before last weekend's race, I stopped by the Raw Girls food truck to try their new Raw Girls Buzz drink — iced coffee with maca, cacao, reishi mushroom, chia, vanilla, and sea salt. Best iced coffee ever. It was so creamy! 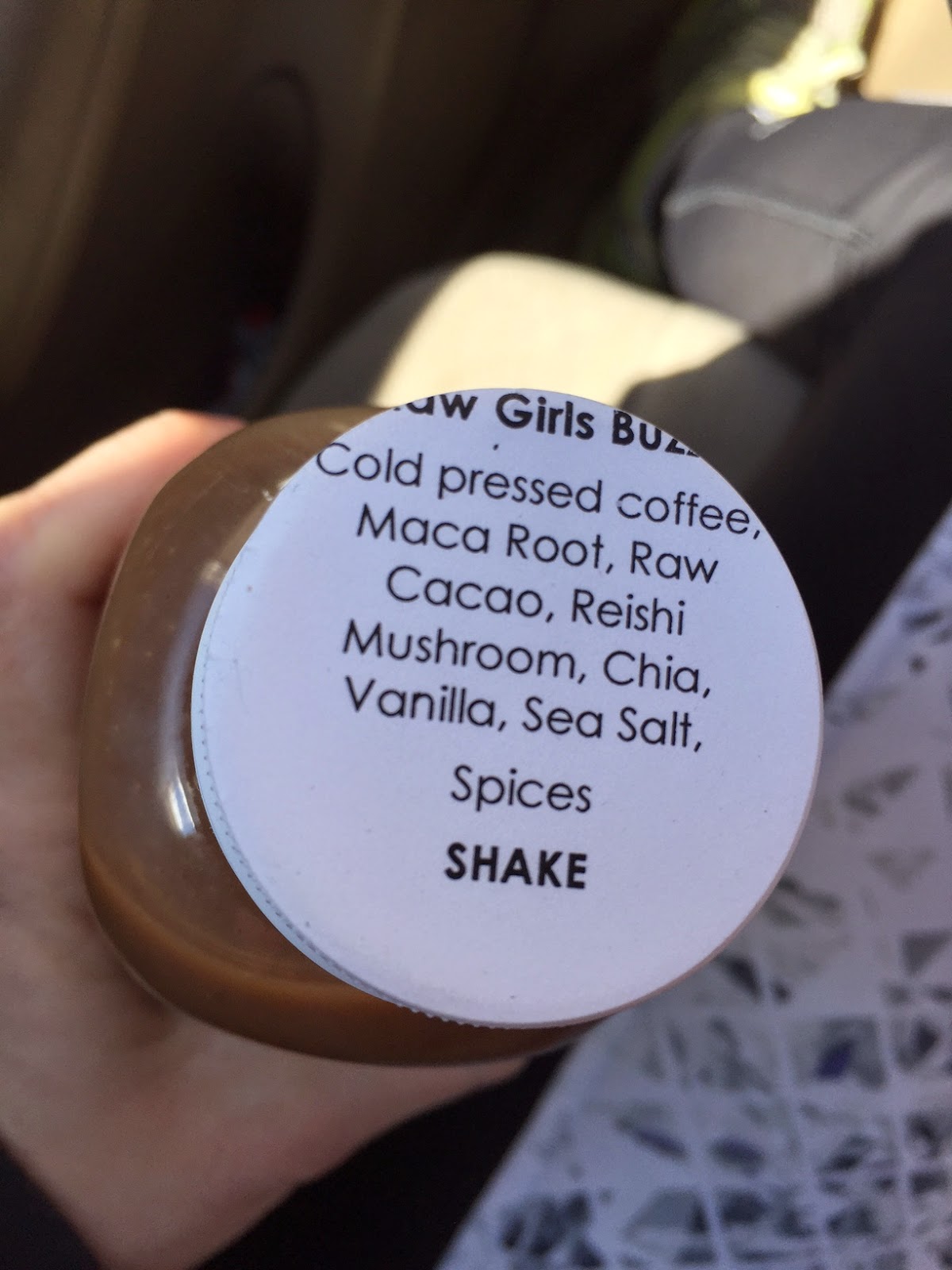 One night for dinner, I whipped up some weird (but tasty) Healthy Nachos. My friend Megan had sent me home with leftover vegan cheese dip after a potluck. So I poured that over some TVP (seasoned with chili powder and other taco spices) and topped with cabbage, jalapenos, and salsa. Served with homemade tortilla chips that I made by microwaving a couple of corn tortillas about a minute until crispy. The chips were sprinkled with chili-lime salt. 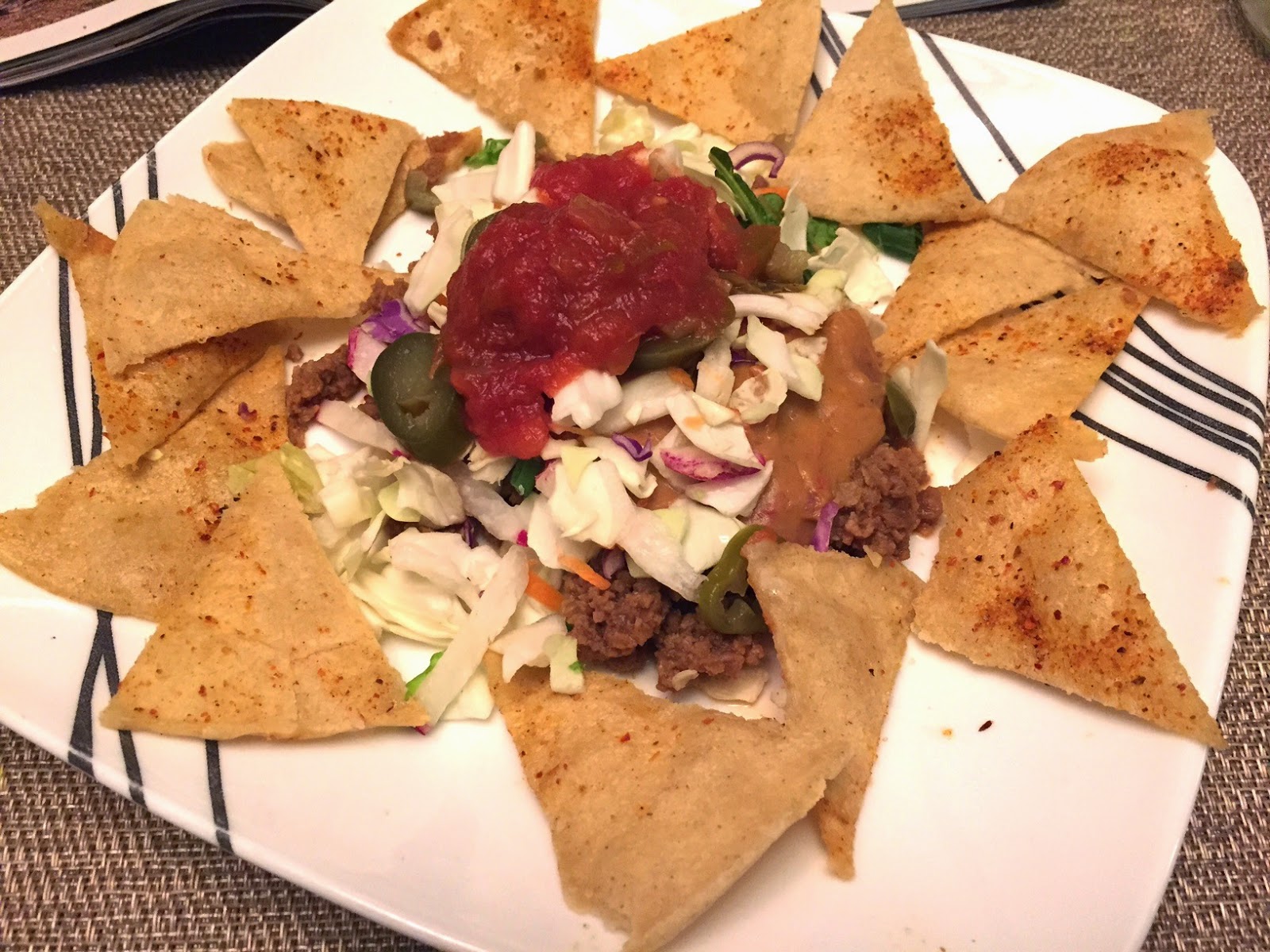 With Cassi's new Pink Diva Cupcakery business across the street, I've been eating my share of cupcakes. You know, for quality control. I couldn't pass up these Thin Mint Cupcakes!! Now that Memphis gets the vegan Girl Scout Thin Mints, all is good in the world. I ordered a couple boxes from a friend's kid, but mine haven't come in yet. The Thin Mint on Cassi's cake was the first one I've had in more than 10 years! 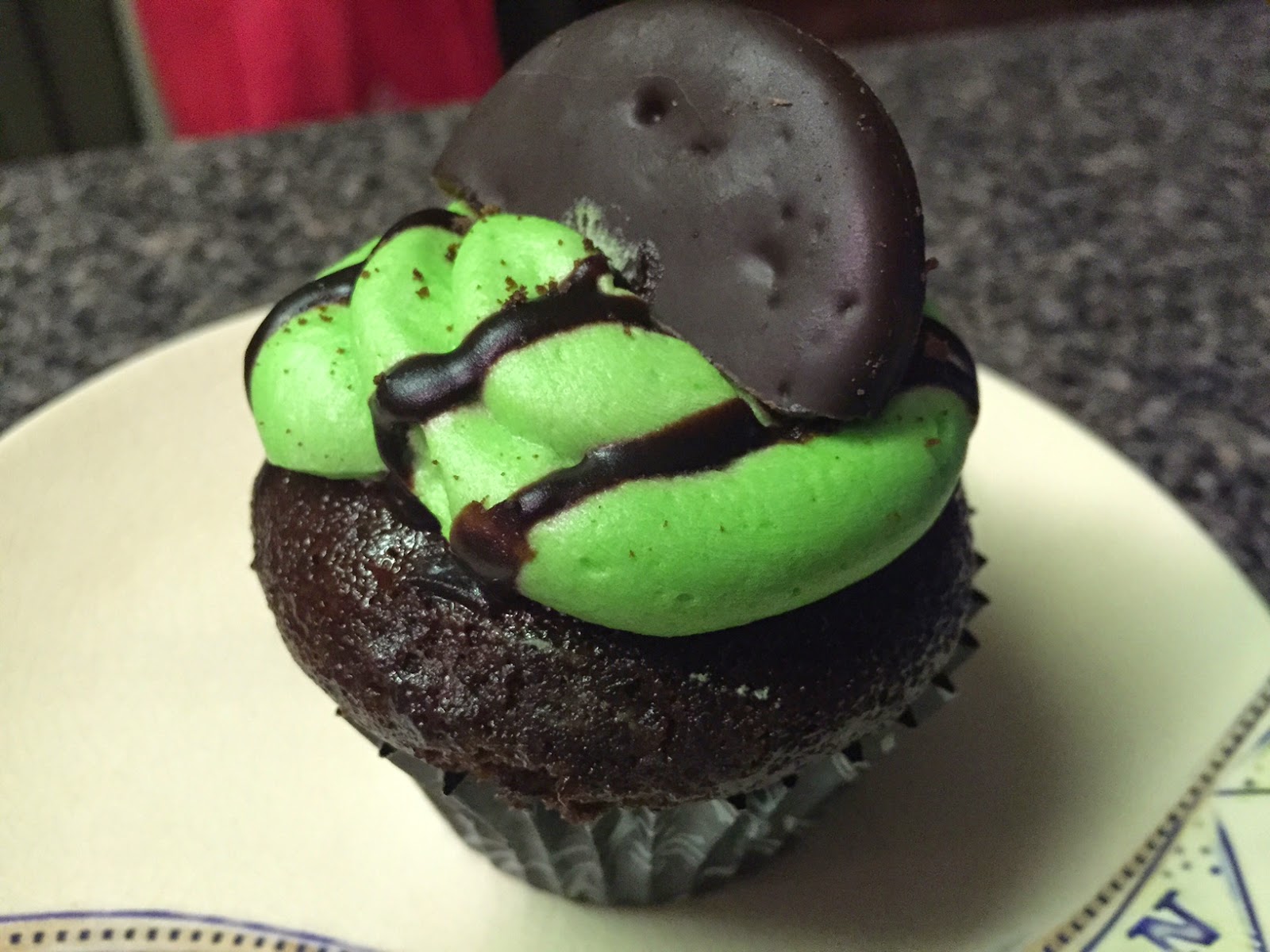 Last week, a co-worker had a wedding shower at the office, and my editor Susan stopped by Cassi's place to get a cupcake for me to have at the office party since everyone else was going to be eating non-vegan cake. Isn't that sweet? She picked out this Bluff City Blueberry Cupcake — a vanilla cupcake with blueberry compote in the center. 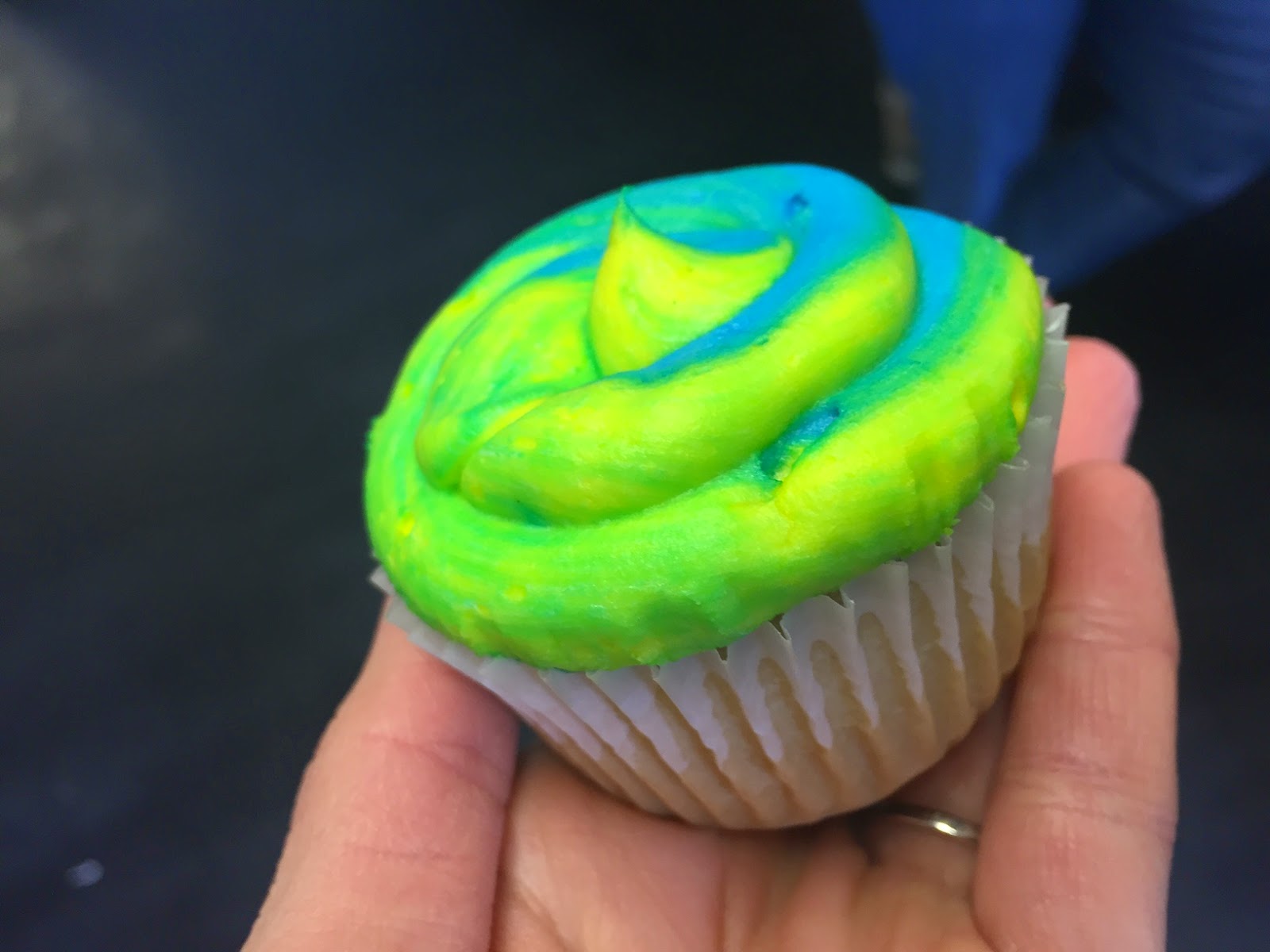 I had to miss my weekly brunch at Imagine Vegan Cafe last Sunday since I was running a half-marathon in Little Rock, but the week before last, I ordered a half serving of the Memphis Slam (biscuit topped with tofu scramble, vegan cheese, gravy, and vegan sausage) with Hash Browns. 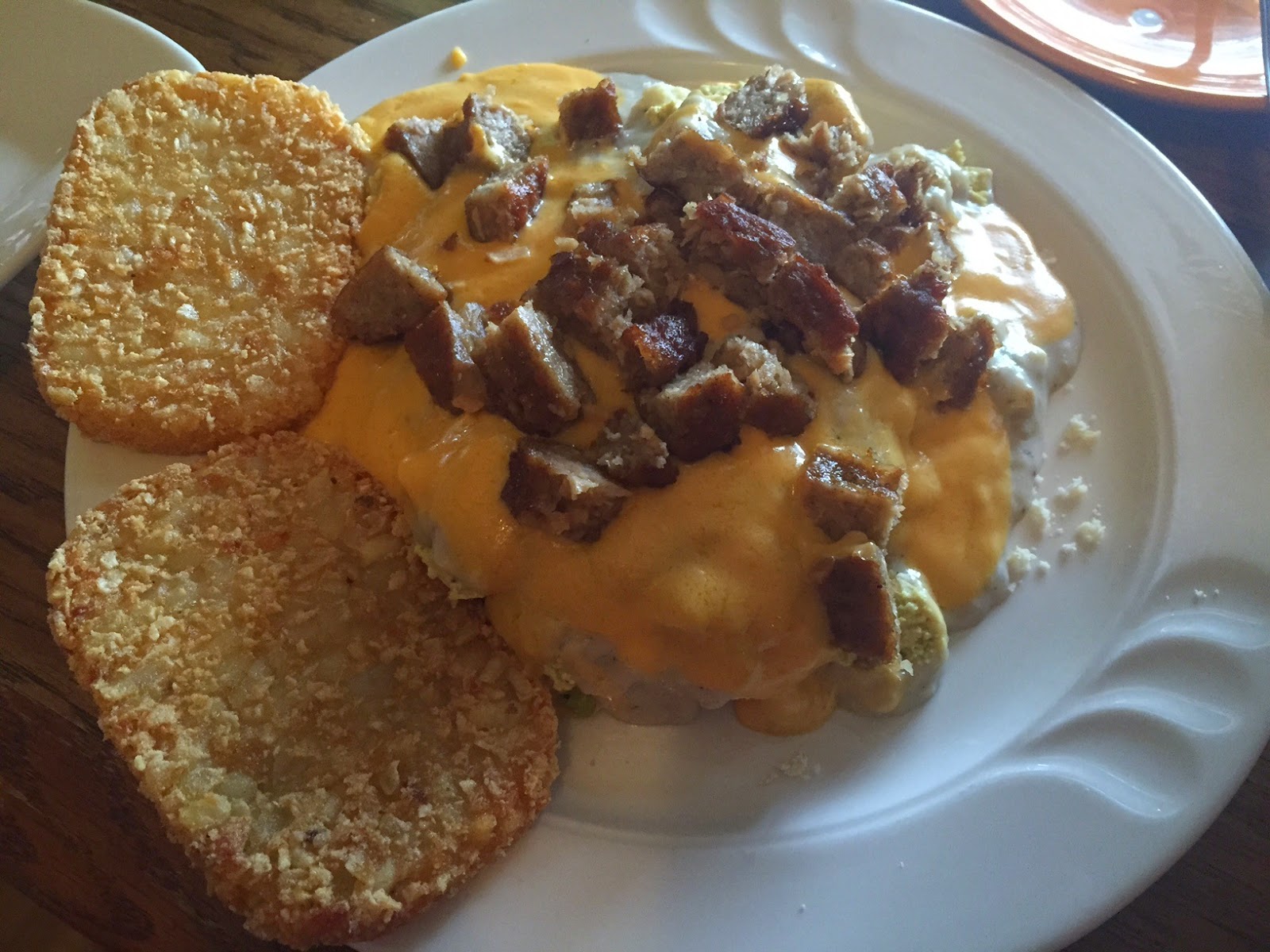 Just today, I met Cassi for lunch at the vegan-friendly Fuel Cafe. We ordered Vegan Reubens, which are made with their homemade veggie patty, Daiya Swiss, and sauerkraut. So good!!! I had mine with a side salad. 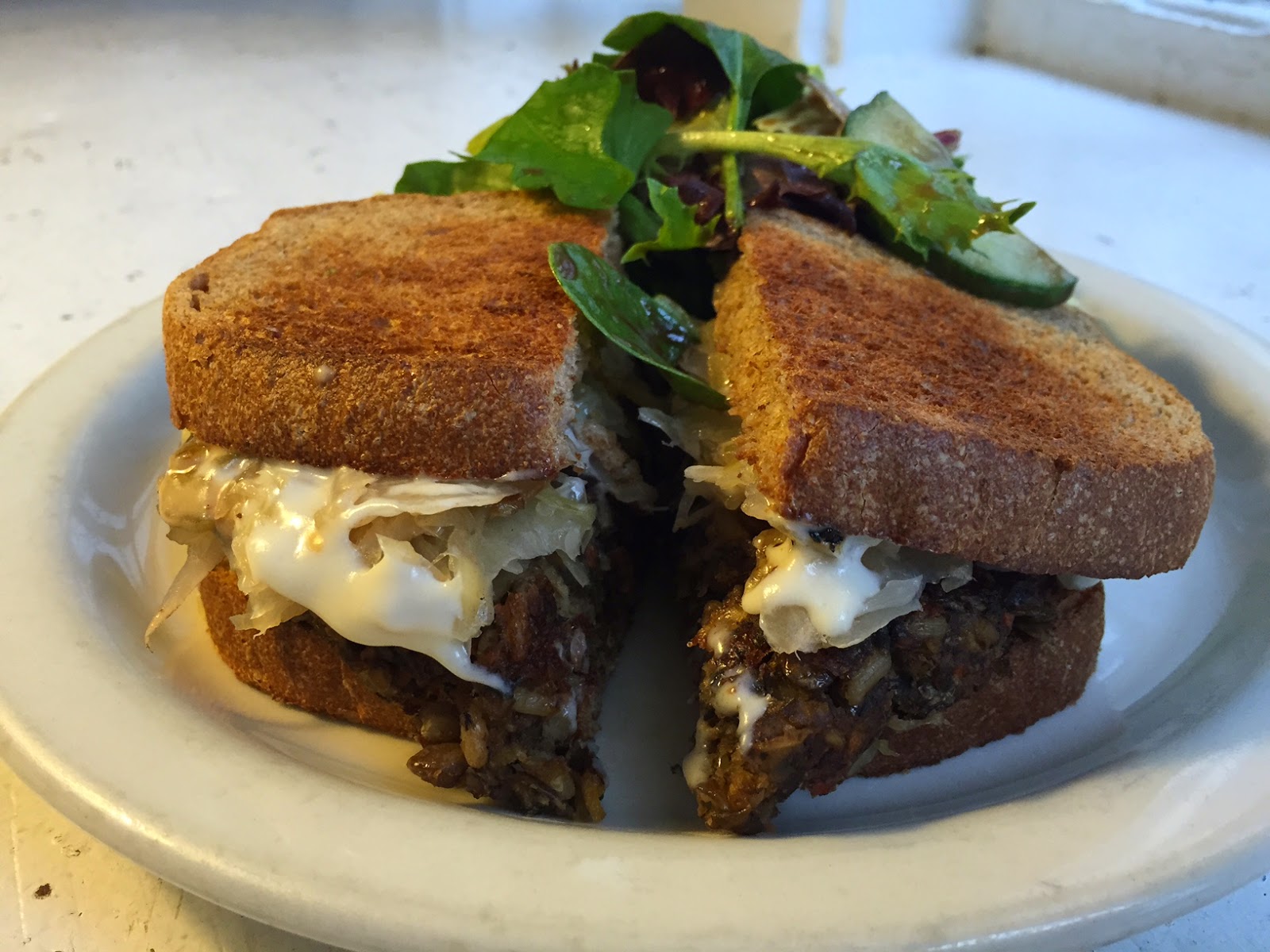 Are you for real about the Gardein Chick'n Sliders? For years I've been trying to get a hold of the best vegan chicken sandwich substitute. Zingers were my favourite, and I wish something would come along to match its taste and texture. But if these match up as mini chicken littles. I am on them!

Thank you Cassi for the blueberry/vanilla cupcake! What a way to have them in day glo. It sends tingles down my color strings!

I've just had my first Thin Mints in 10 years, too! The world feels right again.

And that biscuits/gravy/cheese looks AMAZING. That's a half serving?!?!

So much greatness in this post! I can't wait to try those Chao slices and that reuben is the third I've seen since waking up an hour or so ago and now I needed one!