Sorry to give you two review posts in a row. I like to break them up with posts about vegan events, other stuff I'm eating, or the occasional recipe. But I haven't cooked much this week and my other planned posts still need some work. So here's another review.

Lucky for you, it's a review of something awesome. As some of you long-time readers may know, I'm not a huge fan of drinking hot tea. I love the idea of hot tea. But I'm a Southern gal, and down here, we drink our tea sweet and iced (or in my case, kombucha-ed). And it's just hard for me to get used to enjoying tea any other way.

But there is one big exception: Chai!! I love hot chai because it's creamy and sweet. And it seems closer in taste to coffee than tea. Blue Lotus Chai is my favorite brand because they make instant chai powder. I'm lazy when it comes to some things, and making chai from scratch is one of those things. I'd rather use the little wooden spoon that comes with every package or canister of Blue Lotus Chai to scoop out the exact amount needed for a cup, stir it into hot water, add plant milk and agave, and enjoy.

Blue Lotus Chai, a small company out of Oregon, sent me samples of their newest flavors to try — Mandarin Masala Chai and Star Anise Masala Chai. 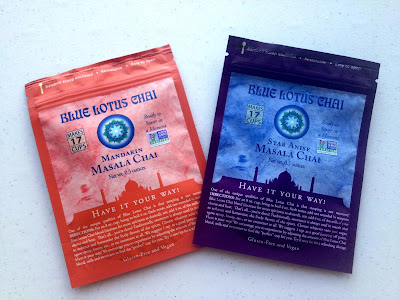 Each of these packages contains enough for 17 cups, and you can order this size to sample. Or you can order each flavor of Blue Lotus Chai in three-ounce reusable tins (makes 100 cups).

On Tuesday, I called a couple of co-workers over to help me sample these in the breakroom. Susan, my managing editor, and I tried the Mandarin Masala, and Hannah had the Star Anise. I am NOT at all a fan of anything anise or licorice-flavored, so I needed Hannah's help with that one. After heating our water and adding chai, we stirred in almond milk and agave. 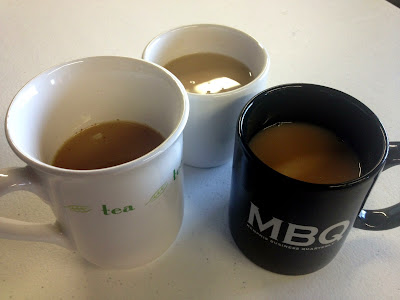 The Mandarin Masala Chai is made with black tea, ginger, cardamom, nutmeg, black pepper, cinnamon, cloves, and citrus blend from extract. The orange notes wafted from the package when opened, but they were much more subtle in the tea. It wasn't overly citrusy, but a hint was there. It reminded me of Christmas. Not sure why I associate oranges with Christmas, but I do. I'll be warming up on the cold nights to come with this comforting mandarin chai.

As for the Star Anise, I could definitely smell a strong licorice scent when we opened the package. Once mixed with hot water, the scent in the air wasn't as strong. Hannah said the tea — seasoned with ginger, cardamom, nutmeg, black pepper, cinnamon, cloves, star anise — was definitely licorice-y, but it wasn't overpowering. She said the anise was a nice complement to the other masala spices of cinnamon and clove. I might just have to be brave and give anise another try soon.
Posted by Bianca at 10:05 PM

I LOVE chai but I'm too lazy to make it!! That's great that there is an instant chai out there! I would probably skip the anise flavor too... I'm not an anise/licorice fan but the mandarin sounds delicious!

It is actually star anise, and licorice haters love it!! It is a much more sophisticated taste than licorice and very balanced with the other masala flavors. Yummm!