Last month, I blogged about Memphis' first-ever Vegan Drinks, a very successful event at Chiwawa in Overton Square. We had our second Vegan Drinks event tonight at 3 Angels Diner in the Broad Avenue Arts District.

In case you're not familiar, Vegan Drinks is a nationwide grassroots social movement. Vegans get together. We drink. We eat. We chat. That's it. Tonight's event was big too! Bigger than I expected, and we even had some new people show up! 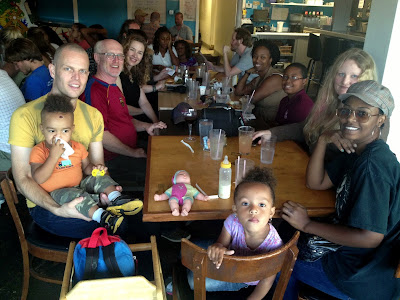 3 Angels Diner is a kitschy diner with a couple of vegan items. None of Memphis' totally vegan restaurants serve alcohol (Imagine Vegan Cafe is in-between beer permits, but they will have beer again in a few months!). So for Vegan Drinks, we have to pick places that are vegan-friendly and not totally veg.

I started with a High Cotton Scottish Ale. High Cotton Brewing Co. is a fairly new local mircobrewery putting out some high-quality beer. I've sampled a few of their offerings recently, but this dark and toasty Scottish Ale is my fave so far. I also tried the High Cotton Saison tonight, but it was just okay. It reminded me a little too much of a hefeweizen. Too light for me. 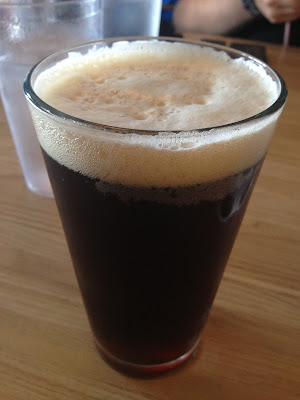 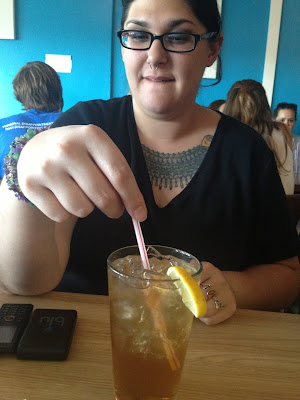 And then she had a Cocotini (not sure what was in this!). 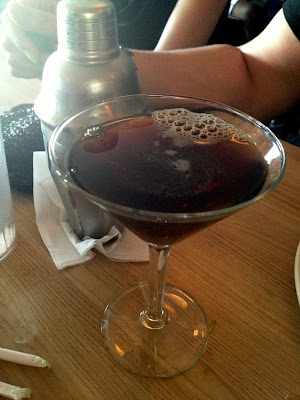 I failed to take pictures of everyone's drinks, but I know some Manhattans were ordered, and Greg had a Sidecar. So retro.

3 Angels doesn't have appetizers, so everyone who ate ordered full meals. I had the Momma's Veggie Sandwich — seasoned tofu, roasted red peppers, pickles, vegan mayo, and lettuce — with Flattop Roasted Taters with Red Peppers and Onions. 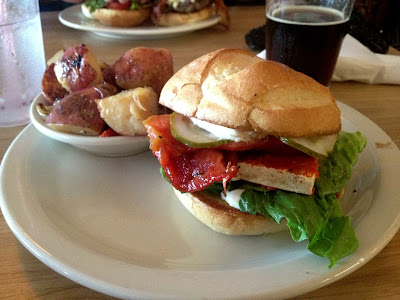 Here's my sandwich open-faced. That tofu is amazing! 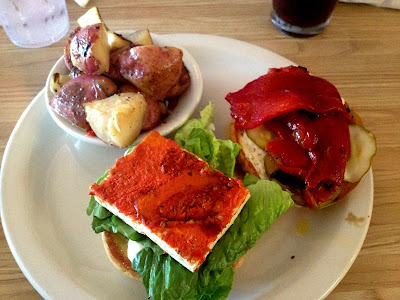 I've had this sandwich several times before, and it's always a winner. Several people at our table ordered the veggie burger, and there were mixed reviews. It's been my experience that 3 Angels veggie burger varies each time I've tried it, so I tend to avoid that now. You can never go wrong with the Momma's Veggie. Sadly, the eggless tofu salad sandwich that used to be on the menu is gone now. That was always my favorite.

Anyway, we had a great time. And we'll do it all again at a different place next month. We plan to rotate Vegan Drinks around to vegan-friendly bars around town.
Posted by Bianca at 9:32 PM

Ahh you're so lucky to have a part vegan diner near you! The chances of me finding one are veeeeery slim because a) I live in France and the french aren't into the whole "american diner" idea and b) there are few vegetarians/vegans...
Oh well.
That sandwich looks FAB!

What a fun night, both the food and drinks look delish'.

Ahh! I totally wish there was a vegan meetup in my area. Vegan bar food + drinks = good for the soul.

Sounds safe to have a whole meal when there's all that booze around :) I think our Vegan Drinks here is tomorrow!

the cocotini had some sort of tequila in it that infused with jalepenos... which is not what I was expecting. it was a very earthy drink, not bad, though