No, not those kind of rice cakes! These aren't the dry, bland, tasteless, crunchy cakes (although despite their blandness, I actually like those rice cakes). I'm talkin' about garaeddeok, chewy Korean cakes that are more like a big noodle and less like a dry patty.

I first discovered these a few weeks ago at a little noodle shop in Memphis called The Crazy Noodle (review post coming soon). I ordered a bowl of vegan noodle soup there, and it was loaded with these flat, chewy rice patties that were unlike anything I'd ever tried.

I'm a noodle freak. In high school, I used to write poems about noodles. If I were being executed in a prison somewhere, I'd request noodles for a last meal. And while these aren't technically noodles, I'd place these somewhere on the noodle spectrum. They're actually made from glutenous rice flour, and they're super-duper chewy. Think chewier than tapioca. If I had to pick a favorite texture, it'd be chewy.

Anyway, shortly after trying these at the Crazy Noodle, I found some at the Asian market by my house. I didn't know what I'd do with them, but I knew I'd figure something out. And then, as if by fate, I stumbled on the recipe for Spicy Rice Cakes by Jesse Miner in the August issue of VegNews. 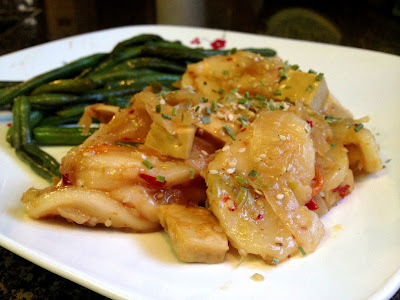 Okay, I know this looks a little messy. But I made the dish last night and took pictures of the re-heated leftovers. The rice cakes taste awesome the next day, but they don't photograph as well since they tend to stick together as the dish cools. The cakes, baked tofu, cabbage, and scallions are simmered in a spicy, sweet, and savory sauce made from soy sauce, sugar, rice cooking wine, and ground chili.

Anyway, if you have the August issue of VegNews and you have access to an Asian market, you should definitely make this dish.

On non-noodle-related note, I have my first real running injury — a stress fracture, which came during a 7-mile run this past Saturday. And I'd wear that like a badge of honor if I weren't smack dab in the middle of training for my first half-marathon. I saw an orthopedic doctor today, and I have to wear special flat shoe for 2 weeks. And no running for at least that long. Really hoping this thing heals in two weeks because my race is on October 13th. Until then, the doctor gave me permission to maintain my cardio on a stationary bike. Ugh. Here's my boot. 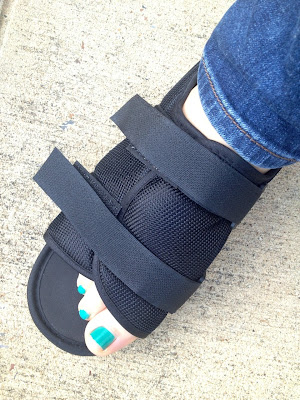 I love your passion for noodles! So cool you're training for a half marathon, I hope your fracture heals quickly!

Man, those rice cake "noodles" sound awesome! I'll have to check out Asian market for those! So sorry about your foot. Hope you heal quickly!

I just picked up that copy of VegNews yesterday and immediately wanted to make those noodles! I'll have to find out if I can find any around here.

Sorry to hear about your injury, I hope it heals fast!!

the rice cakes sound awesome! that really stinks about your foot! did something happen while running or did it just hurt really bad afterward? something similar happened to me last year the week dayv and i were making settlement and moving into our new house- i ran 7.5 miles, came home, was packing, and noticed more and more how badly my foot hurt. i never went to the doctor, but my foot hurt for probably a month. needless to say, i stopped running :/

Oh I hate it when you get an injury!! It really sucks. At least your little foot wrap looks cute hehe