Remember when I went to Portland in May for Vida Vegan Con and bought a box of 13 Voodoo Doughnuts to enjoy over the course of five days — all by myself? And I failed. I probably left four doughnuts in the box at my friend Joel's house when I left for my flight at 5 a.m. on the last day. 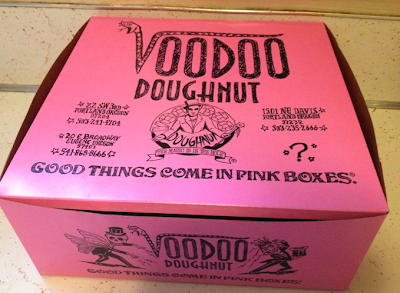 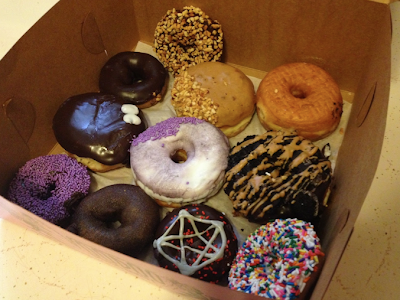 I let myself down with that failure to eat 13 doughnuts in five days. I love doughnuts more than just about any other food on earth (okay, I probably love ramen and pizza just a little more). I'm still mad that I wasted those last remaining doughnuts, especially since goddess only knows how long it will be before I can have Voodoo Doughnuts again.

But there is hope, my friends. Hope for a brighter jelly-stuffed, doughnut-filled future. Why is that? Well, my favorite dessert and my favorite beverage (beer) just had a baby, and the Memphis Cash Saver (home of the best/cheapest craft beer selection in Midtown) has plenty in stock. Introducing Rogue Voodoo Doughnut Beer! 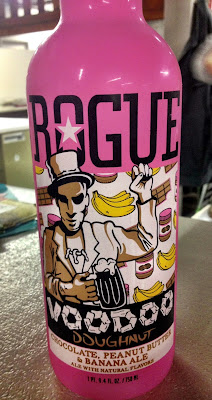 Yes, you read that right. It's Chocolate, Peanut Butter, and Banana Ale! And Cash Saver has a whole cooler devoted to it. It's almost Elvis Week in Memphis, and Elvis loved his PB & 'Nanner Sandwiches. 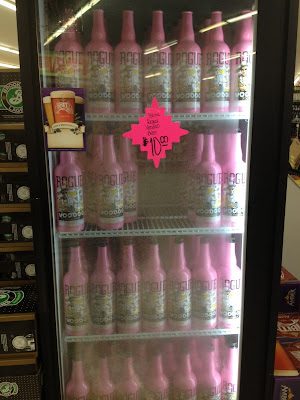 The beer doesn't taste exactly like a doughnut. You'll need 360 Glazed Doughnuts Vodka for that (and yes, that stuff tastes EXACTLY like the fried sugary pastries). But the notes of chocolate and banana shine in this stout. The peanut butter flavor is more subtle, but it's there. I found that I tasted the peanut butter more in the aftertaste. And it also smells lightly of PB.

Like all Rogue beer, this stuff is damn delicious. It's no Voodoo Doughnut, but it's the closest thing I can get to one in Memphis. Maybe if I drink enough of this, I can stop feeling like a doughnut failure.
Posted by Bianca at 11:06 PM

I want that beer AND the vodka. And a donut, just for good measure :)

Oh. My. Word. This sounds amazing - I might need to make a special trip to hunt this down.

This is very exciting... and I'm happy to have you confirm that Cash Saver is the THE place to buy beer in Midtown. People always look at me funny when I tell them that.

I love donuts, but I'm more in love with the idea of peanut butter flavor in beer, even if it's not the dominant flavor. Can there just be a peanut butter beer, too? Cause I would buy it by the case.

Holy crap, that box of donuts is making me hungry. I so wish that I had stopped at Voodoo when at VVC.

i just confirmed my local party store carries this, and has some in stock.
thank you for bringing such a glorious concoction to my attention!!! <3