Vegan Food for Your Next Kegger

You know how there are some cookbook authors you just wanna be besties with? You read their recipe intros, titles, and snarky instructions and you think, "We were meant to be friends." That's how I feel about Alex Brown and Evan George, authors of the Hot Knives food blog and the bros behind the new full-color, photo-heavy party food book, Lust for Leaf: Veggie Crowd-Pleasers To Fuel Your Picnics, Potlucks, and Ragers.

I've always been one of those girls who'd rather hang out with the dudes and drink beer than do some girly stuff like shopping or pedicures. And I'm fairly certain Alex and George can throw a hell of a party. Kegstand anyone? Their new cookbook Lust for Leaf is filled with vegan party foods that will impress the shit out of your guests. Now, I should tell y'all now that this is a vegetarian cookbook, not a vegan one. So there are some cheesy recipes. But all vegan recipes are labeled with a big ole "V," and there are many, many mouthwatering vegan recipes. So many, in fact, that I had a hard time deciding what to try first.

But being the Dirty South girl that I am, I finally settled on these Oyster Po'Boys: 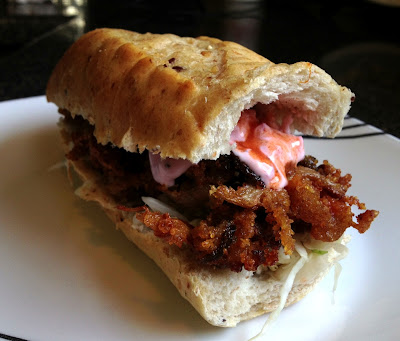 These are beer-battered, double-fried oyster mushrooms on a bed of shredded cabbage, topped with Radish Remoulade, hot sauce, and tucked into a two slices of soft French bread. This was amazing! You don't just fry the oyster mushrooms once, but TWICE! And there's a little note on the side of the recipe that says this: "Do you really need to saute AND fry these fuckers twice? Oh yes you do." So on that note, I did. And it was worth it. Frying twice made these little mushrooms so crispy. I've never had real oysters, but I'd imagine they'd be similar to this.

Oh, and that remoulade is homemade! The recipe is in the book. But it's basically Vegenaise, radishes, and chives, and it has an awesome pink hue.

Also, each recipe comes with a suggested adult beverage and a suggested song. This one should be served with Brewdog's "Tokyo" (an aged oak stout) while you listen to "Rebel, Rebel" by David Bowie.

Since this was a fairly fatty sandwich, I opted for a really healthy side. I made the Summer Sweater salad dressing: 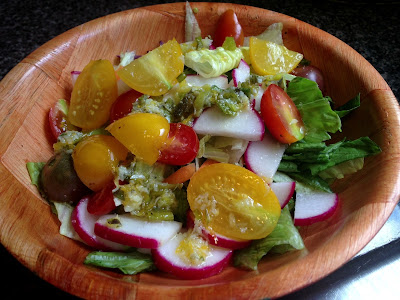 Paul and I grow our own habaneros, and this salad dressing calls for two. Plus, it also has garlic, scallions, fresh oregano, orange zest, and oil. The habaneros are toasted, which takes some of the intense heat away. But it's still a tad spicy. Quite possibly the best salad dressing ever.

There are plenty of vegan desserts in here too — Strawberry Hibiscus Sorbet, HK Vanilla Wafers, Spiced Pecan Pie. And my personal fave — Booze Holes!!!!!! Yep, vegan doughnut holes made with nuts and alcohol. I'll definitely make these for my next potluck!
Posted by Bianca at 10:23 PM

Whoa. I want that double-fried sandwich!

yum! that sounds amazing. i have also always been a beer drinking with the boys kind of girl. this book sounds right up my alley!

Love the idea of this book. I've seen it come through work and always go through it. I love good beer almost as much (or more?) than good food, and keggers are always great. Especially with solid tunes. It's always cool when cookbooks suggest a whole atmosphere like that.

This cookbook sounds so badass! Thanks for the awesome write-up, Bianca. The recipes sound fantastic, and the pictures are awesome. Can't wait to check this one out -- I'm inspired to throw a kegger now, too.

A lovely looking sandwich and a great sounding cookbook.

That Po'Boy pic is making my DROOL!!