These Cakes Won't Make You Crabby

Disclaimer: I've never eaten crab. And I don't really know what it's supposed to taste like.

But I have eaten my share of vegan crab cakes. Memphis' Imagine Vegan Cafe has some on their menu. Our Whole Foods here sells some in their deli case. And a friend who used to run a vegan lunch pick-up service in Memphis would feature crab cakes from time to time. All of those crab cakes were awesome.

But none could even come close to rivaling the Match Vegan Crab Cakes. 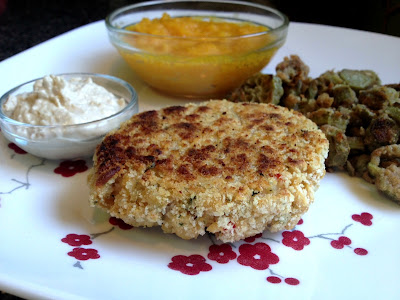 These look and taste like what I'm pretty certain crab actually looks and tastes like. To be sure, I had my co-worker Hannah try a bite. She's had plenty of real crab in her day, and when she sampled these Match meat cakes, she made that face that people make when they try a vegan meat that tastes eerily similar to the real thing. You know the face.

Just look at the inside. Doesn't that look like flaky crab meat?! 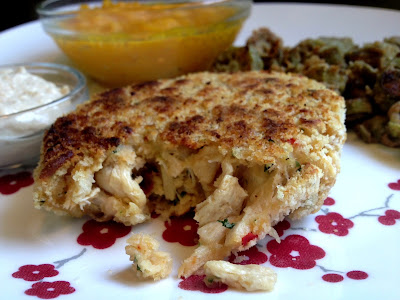 These were among a giant box of samples that Match sent me to review. They come frozen, and they're pre-breaded. All you have to do is fry 'em up in a little olive oil. I served mine with vegan horseradish sauce, fried okra, and mashed butternut squash.

I've never been a fan of seafood. Growing up, my parents hated seafood, so we never had shrimp, crab, lobster, or anything like that in our house. And when I sampled shrimp once in my pregan days, I almost threw up it was so nasty. I'm just not a fan of fishy tasting foods. So I'm really surprised that these Match crab cakes didn't totally freak me out. They're not super fishy tasting, but when you cook them, a seafood restaurant smell does waft through the house. But I guess just knowing they're made from soy and wheat protein made me more comfortable. These are really yummy, and they'd probably fool any omni.

Last time I blogged about a Match product, someone asked in the comments if they were available in Memphis. Sadly, the answer is no. But you can order Match online. And they also have a request letter form on their website that you can fill out and hand to your grocer to encourage them to carry Match meats.
Posted by Bianca at 10:52 PM

Yet another thing I'm going to have to hunt down in California!

Oh, man, those look good... Nothing like a good vegan crab cake. Sometimes tempeh just doesn't do the trick! Going to have to keep an eye out for these. :P

I definitely want to try these! When I lived in Charleston (before going vegetarian), I was able to sample lots of fresh seafood and I miss that taste from time to time. Sounds like these would hit the spot!

I wasn't even hungry but now I'm drooling. Thanks for another find!