Before I get into tonight's post, I have a fun announcement! I reviewed Texas Chainsaw Massacre from an animal rights perspective on the fabulous Our Hen House podcast this week. And I'm in the same episode as vegan actress Emily Deschanel. You must listen!

Last year, my friend Leslie launched The Magical Traveling Vegan Potluck, which had a good several months-long run of moving from one friend's house to another before it fizzled out. But she just moved in with our mutual friend Michael, and she's bringing the potluck back. We had the first return potluck at their place last night.

If all goes as planned, the potluck will be hosted by one friend or another each month. We had a great turnout last night with lots and lots of yummy vegan food!

Since I'm working on my retro vegan cookbook, I decided to work on crafting a cheeseball recipe. Cheeseballs are totally 70s, right? After some tweaking and experimenting, I came up with these Mini Walnut and Cheddar Cheeseballs. 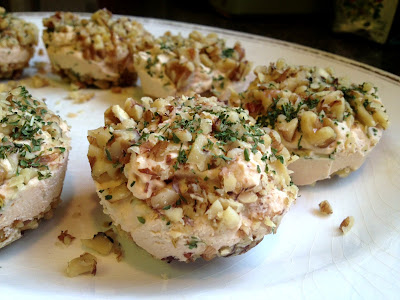 I made eight small balls. My plan was to make one big ball, but the soft vegan cream cheese in the recipe was too soft to get the cheese to roll into a ball. So I froze small balls in muffin tins and then de-frosted before serving with crackers. I finally got a chance to use my cheese board and cheese knives! See, vegans can still have cheese. 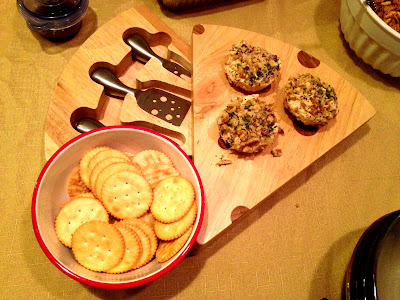 Speaking of cheese, Cassi made a delicious cheesy Vegan Lasagna from Vegan Planet using Daiya and tofu ricotta. I could have eaten this whole pan. But I was nice and saved some for the other guests. 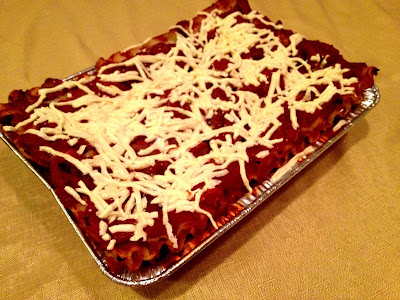 Greg brought his famous Tofu Nuggets. These are like little chicken nuggets, and they're awesome. He has to bring these for every potluck now because someone always requests them. Last night, he whined about being a one-hit wonder. But hey, if the people want tofu nuggets, give them tofu nuggets, dude. 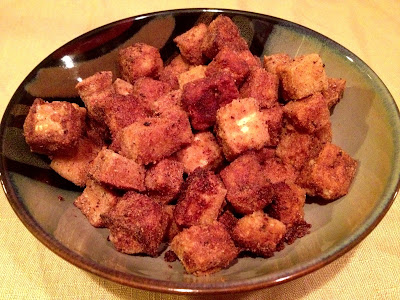 Michael and Julie brought a fresh Cucumber, Tomato, and Beet Salad made with produce picked from a garden in Jonesboro (my hometown!). 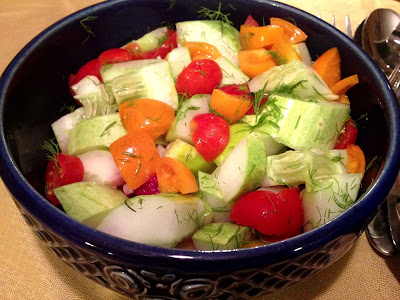 Vaughan, always the creative cook, made an interesting dish using lentils, broccoli, cashews, and almonds. He typically just throws stuff in a pot and never makes the same thing twice. But it's always good! 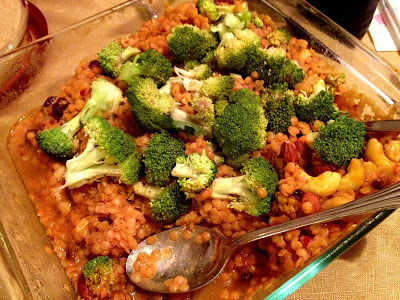 Leslie made so much stuff!! And since she's really into Indian food, she treated us to all sorts of interesting dishes. There was Pani Puri — fried hollow crisps stuffed with chickpeas, potato, and chutney. I've had these in Indian restaurants, but it was way more fun stuffing my own pani puri in Leslie's kitchen. 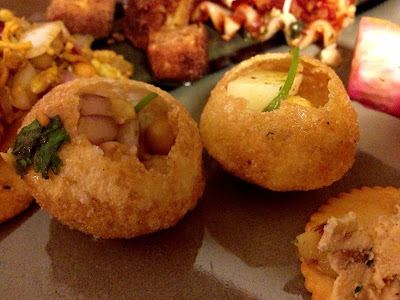 And there was my very fave, Bhel Puri! Indian chaat dishes are my favorite things, and I love this crunchy snack of sev, puffed rice, veggies, and tamarind sauce. 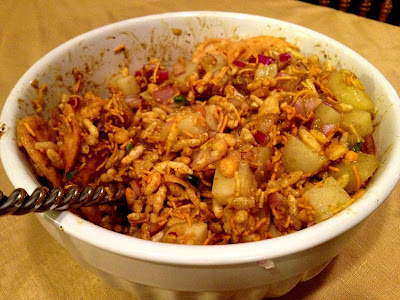 For dessert, Leslie made the most amazing Mango Custard. I couldn't stop eating this. It had fresh slices of apple, banana, and mango floating in a lightly sweet soy-based custard. It's a dish I often see on Indian buffets but can never try because it's typically made with dairy. 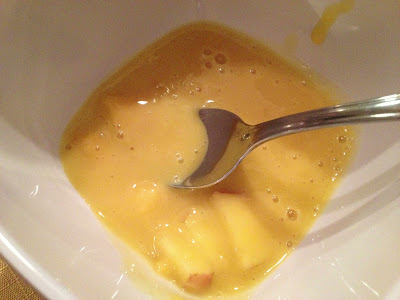 To drink, Leslie made homemade chai, but I forgot to photograph it. And she made Rooh Afza. This is a sweet Pakistani syrup that tastes lightly of rosewater, and you mix it with water. It's so refreshing and summery. I love that the label says "summer drink of the east." 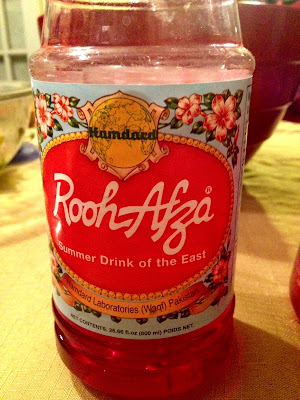 Autumn stopped by Muddy's Bake Shop and picked up some Vegan Almond Brothers Cupcakes. Muddy's is a very popular local cupcake shop that always has a few vegan flavors. These were the business. 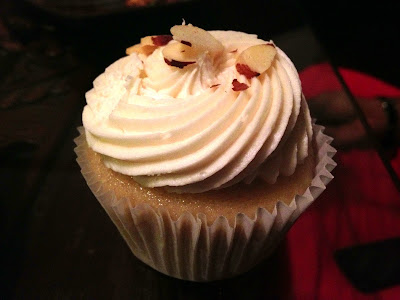 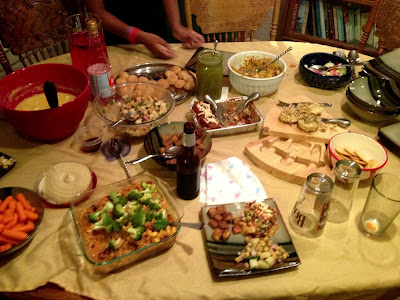 I ate so much! And Leslie sent me home with some leftovers, which I had for lunch today. Can't wait til the next month's potluck. I'm so lucky to have amazing vegan and vegetarian friends who can cook!
Posted by Bianca at 7:31 PM

Yum! I love Vegan Potlucks. Bhel Puri is my favorite Indian dish too.

Also, I listened to the Our Hen House Podcast today and you did a fabulous job! Thank you so much for reviewing the movie because, just like Mariann and Jasmin, I was interested in hearing about it, but too much of a wimp to see the movie myself :-)

These are some glorious, er, cheeseballs!

How exciting and fabulous! Looks so delicious!

Yay, I love a good potluck and any potluck with a cheeseball would be a winner in my eyes!