This weekend, I did a couple of food demos and booksignings at Chicago Veggie Fest. It's about a nine-hour drive (ten hours with pee stops), so Paul and I road-tripped it up there. This was, by far, the largest VegFest I've ever attended. There were soooo many people.

Since it was hosted by the Science of Spirituality Center (a meditation center), the fest had a bit of a spiritual bent to it, which was quite unlike other festivals I've attended. There was a meditation tent, and the keynote speaker was His Holiness Sant Rajinder Singh Ji Maharaj. Also, the fest wasn't totally vegan. Some vegetarian food was offered in the food court area, but vegan food was more prevalent. Chicago has a more vegan culture-centric VegFest in September called VeganMania.

Look how crowded it was when we first arrived! And yes, that's Paul in the right foreground. 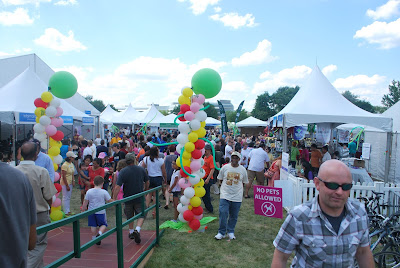 On Saturday, I had the first demo. I made my Eggless Tofu Olive Salad from Cookin' Crunk. Here I am mashing the tofu up with my hands. I wish those Porta-Pottys didn't show up in the background!! 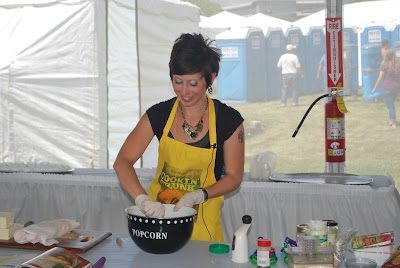 Here's a slightly out-of-focus shot of me passing out samples. 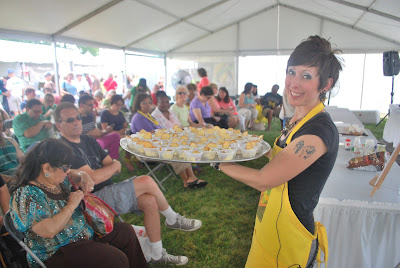 After my demo, I met Warren from the Book Publishing Company (my publisher) and he sold books while I signed. I met some awesome dedicated blog readers! And I made some new friends. 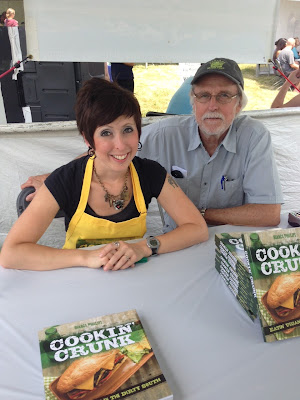 Once that was over, I was famished! Paul and I hit up the food court for lunch. There were so many options, but I was craving carbs. So I went for the Soy Chicken, Veggie Noodle, and Rice dish from the China Palace booth. 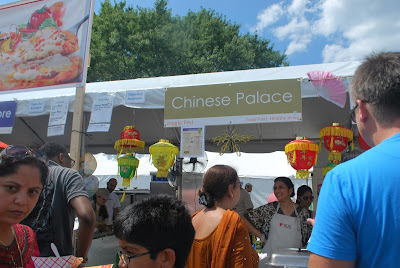 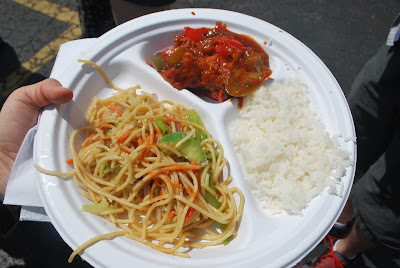 This was really yummy. The "chicken" was really textured and meaty, and it was swimming in a sweet-and-sour chili sauce. The noodles reminded of the not-so-vegan lo mein that I still miss, but these were marked as a vegan item. Also, carbs for the win.

Paul got the Cajun Carribean Chicken from another booth. It was deep-fried and amazing! Also very meaty. I was little jealous, so I proposed that we share (and by share, I mean, let me half of yours but you can only have a few bites of mine). 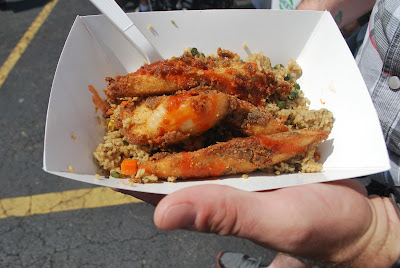 I signed books again for awhile at the Book Publishing Company's tent, and I spent a little time wandering around and sampling all the freebies. Teese was there with Dandies samples. And Follow Your Heart was making quesadilla samples with their new shredded cheese. We were especially impressed with the samples of Phood protein powder. Paul even bought a $40 tub of the stuff to take home!

On Sunday, it was time to do it all over! My demo was at 3 p.m. on Sunday, so I hit up the food court before my demo. I found a vendor selling Vegan Sausage Pizza. Wow! This was really good. The crust was chewy and tender at the same time, and they were very generous with the cheesy toppings (they used Daiya). My slice was hot and fresh out of the oven. 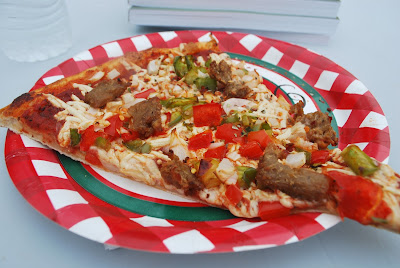 For my demo, I made Creole Steamed Sausages from Cookin' Crunk. Here I am talking about my favorite Cajun seasoning — Slap Ya Mama. 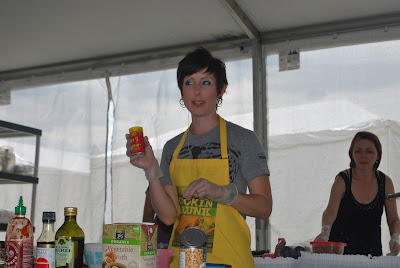 I signed books outside the demo tent again afterward. And then I moved to the Book Publishing Company tent to sign more. Other BPC authors presented and signed at the fest too. Jennifer Cornbleet (Raw Food Made Easy), Caroline Marie Dupont (Enlightened Eating), and Miyoko Schinner (Artisan Vegan Cheese) were there. Miyoko was in the tent Sunday afternoon when I was, so we snapped pics together. She is pretty much the goddess of vegan cheese!! 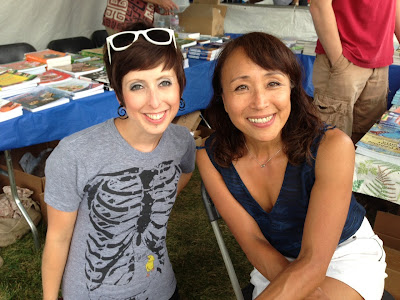 Since we were driving home Sunday night, we had to leave the fest around 5 p.m. in order to make it back to Memphis at a decent time. But before we hit the road, I had to eat one more meal from the food court — Masala Dosa! This crispy dosa was served with sambar, masala filling, and a coconut chutney. 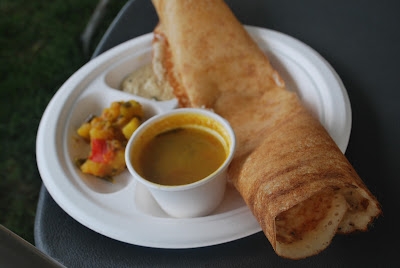 Chicago Veggie Fest was such fun! I'm so thankful my publisher invited me. Check back in tomorrow because I'll be posting about the vegan and vegan-friendly places we visited when we weren't at the fest.
Posted by Bianca at 8:42 PM

Awesome! Glad you had such a great time! It was nice getting to meet you, and thanks again for signing my copy of 'Crunk'

PS: My husband really loved the creole sausages you demoed on Sunday, which is amazing cause he normally won't eat stuff with beans in it. :)

That Caribbean Kitchen chicken was incredible!!

Awesome food choices. I find that Chinese places really do fake meats well. Also Chicago is definitely the place to get an awesome slice of pizza.
So cool that you get to travel around so much!

You look great! Love the shirt!

I went on Sunday and enjoyed your demo. Glad you could come!

Thanks so much for making the long trek to Chicago! It was so great to see your demo on Sunday. The Tofu Olive salad sounds delicious too!