I've been hearing about MATCH Meats for a few years now. And when I saw they were featured in a number of recipes in Betty Goes Vegan, I got super sad that MATCH isn't sold in Memphis. I'd heard it was an amazingly realistic plant meat, and I'm a vegan-meat-and-potatoes kind of gal. I like my plant meat to taste like, well, meat.

But then MATCH emailed me a few weeks ago to ask if I'd review some samples of their products. Hell yeah! When they said "samples," I had no idea I'd get all of this!!!

Look at all this fake meat (I know some vegans don't like the phrase "fake meat," but I'm owning it)! I'm set for months! 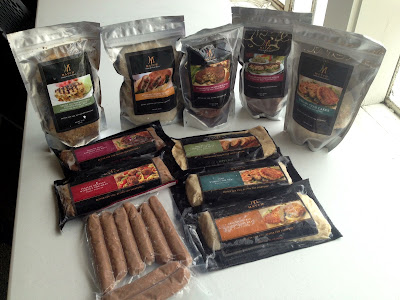 I'll be breaking reviews of these meats into multiple posts as I try things. But of course, I tried the burgers first because these aren't just any old vegan burger. These are stuffed burgers!

Out of the whole "sample" haul, I was probably most excited for the Vegan Stuffed Pimiento Burger. In my cheese-eating days, I loved pimiento cheese, and I've created a tasty (and healthier) vegan version for my cookbook. This MATCH burger is freakin' stuffed with pimiento cheese. 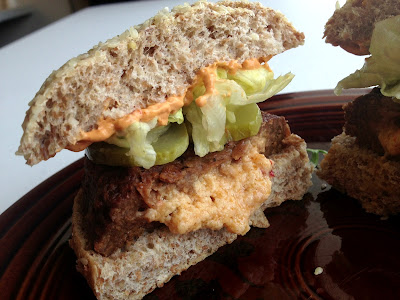 I'd never had a stuffed burger (meaty or vegan) in my life, so this was a new concept. But I'm a sucker for anything with surprise center. The creamiest vegan pimiento cheese mushed out of these little guys, and I was scared to push my bun down for fear of losing my cheese. It's made from Tofutti vegan sour cream, Daiya, and some other stuff, and it really tastes like pimiento cheese. Oh, and the meaty part was delicious too. It was very realistic. I'd say this plant protein rivals Gardein for the meatiest, most realistic vegan burger.

Next I tried the Vegan Stuffed Mushroom Burger. 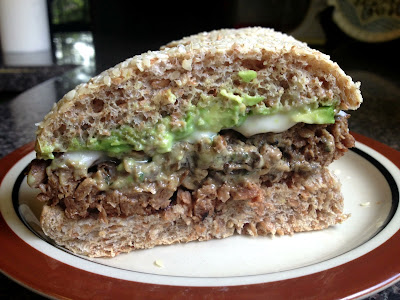 Also wonderful! Same great burger meat but stuffed with a creamy mix of porcini mushrooms in a vegan cream cheese sauce. It really has that wild mushroom taste. I topped mine with avocado and a slice of Daiya Swiss.

These are the only two MATCH products I've tried so far, but judging by how perfect these were, I'm certain MATCH will become my new favorite plant meat. I wish I could buy this stuff in Memphis, but it looks like it is sold on Pangea and Vegan Essentials.

Stay tuned for future MATCH meat reviews. And just FYI: I'm heading to Chicago Veggie Fest this weekend, where I'll be signing books and doing a couple of food demos on Saturday and Sunday, along with Miyoko Schinner, Jennifer Cornbleet, and lots of other vegan authors and chefs. Come see me if you're in the area. And if not, I'll be posting plenty of Veggie Fest pics when I return on Monday.
Posted by Bianca at 8:00 PM

Dang! These burgers look so tasty. I'll have to see if they're available in Portland (Spidey sense tells me probably?)

those look really tasty! have fun in chi-town. i've got to get myself to a veg fest soon. they sound awesome :D

Oh, man! Lucky you! Look at that bounty! I look forward to reading all of your reviews of the various products.

AAHHHH! These look amazing - Can't wait to see these around Cincinnati!!

BTW - Found the doughnut beer this evening at my local Whole Foods - can't wait to try it! Got sidetracked by pumpkin ales.

Do they use non gmo soy or other products?

I saw on the Veggie Fest website that you'd be doing demos! Super exciting, since I live in the Chicagoland Area. I'll definitely drop by and check out your demo and say hello!

PS: If you have time for any non-veggie fest related eating Chicago has got some great vegan restaurants. Since you love comfort food I strongly recommend the Chicago Diner, Native Foods, Soul Vegetarian East, Handle Bar is also very good but it's not 100% vegan, they serve fish and dairy but half the menu is vegan. The fried Avocado Tacos there are amazing!

Have a good time!

Great to meet you at the Chicago VeggieFest!Can't wait to make some recipes from your book.Funny that you posted this because my boyfriend's mom just gave me the Betty Goes Vegan book tonight!It makes me want to try Match too but I don't think we have it even in Chicago (and I mean Chicago proper-not Naperville). I'll have to investigate and keep an eye out! Thanks for all you do, Bianca!

Those BUNS look great! No really, are they sprouted (particularly the pale one at the bottom)? I need good bread--I can't do veganism while eating pizza bread :)