Yesterday, I posted about one day's worth of homemade, frozen, vegan meals from The Vegan Garden, a food delivery service that ships meals to busy vegans via FedEx. You can choose a meal plan, and they'll ship as many breakfasts, lunches, dinners, and desserts as you need.

They sent me a three-day Pioneer Meal plan that included breakfast, lunch, dinner, and dessert for each day for review. Here's what I was given for day two. 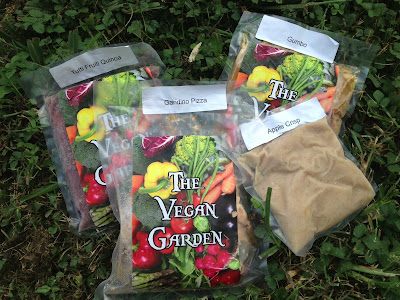 Breakfast was Tutti Frutti Quinoa, a gluten-free breakfast made from quinoa, fresh berries, and vanilla soymilk. 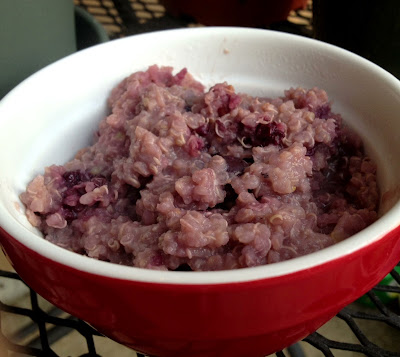 As far as I could tell, there were blueberries and raspberries (but maybe strawberries). This was yummy and very filling. I'm more of a savory breakfast person, but I occasionally like a sweet porridge-style breakfast like this. I had this with a banana and a glass of almond milk. 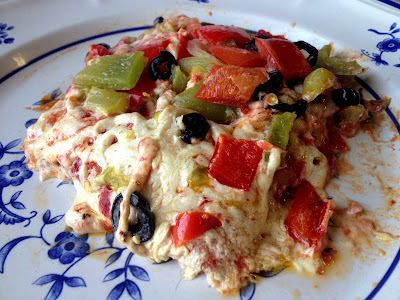 Because it was frozen when I put the pizza in the microwave, the cheese got all melty and gooey like frozen pizzas tend to do in microwaves. But I love that! Nothing beats eating pizza with a fork because it's too cheesy to eat with your hands. That's a good vegan problem to have. The crust had that awesome, soft deep-dish texture. This pizza was the business. I'm not positive, but I think was made with Daiya cheese. I had it with a side salad.

I had a few after-work parties/meetings to attend, so I had my dessert as an afternoon snack that way I'd be satisfied until my late dinner. Dessert today was Apple Crisp. 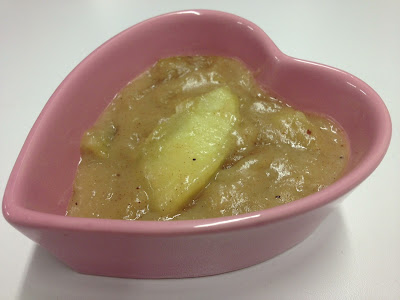 This was so delightful. It looks like apple pie filling, but there were oats and vegan butter mixed in, so it had the taste of a full-on pie or cobbler without the crust.

You might have noticed in the first picture in this post that there was a vegan gumbo for dinner. And that's what I was expecting when I put that package in the microwave for dinner. But when the meal was heated and poured into a bowl over brown rice, I noticed the gumbo wasn't very soupy. I assumed the veggies had absorbed some of the liquid, so I added a little water and some hot sauce and heated some more. 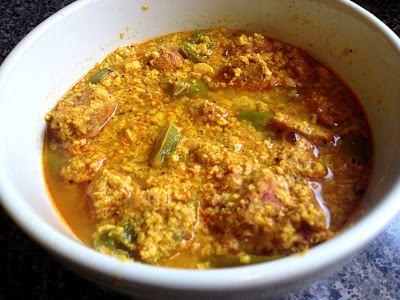 And then I took a bite. Surprise! This wasn't gumbo at all! This was Huevos Con Chorizo from The Vegan Garden's breakfast menu! It was basically a spicy tofu scramble flecked with slices of soy chorizo. They must have mixed up the two in labeling. But it's an honest mistake. Both dishes contain the chorizo, and the huevos looks a lot like gumbo when frozen.

As much as I love gumbo, I'm a bigger fan of anything with tofu. So this was like a bonus! I only wish I'd realized this was a tofu scramble before adding water. With the added water, it was more like Huevos Con Chorizo soup! But regardless, loved this dish! There was so much chorizo, and the tofu was heavily seasoned.

This is a small vegan-run company, and any mislabeling is purely human error. It can happen, and it didn't bother me a bit.

Well, that's all for now. Check back tomorrow for my last full day of The Vegan Garden meals.
Posted by Bianca at 10:07 PM

Nice! I love the idea of vegan meal delivery. In my spare time, I fantasize about running a low-cost vegan hot meal delivery service for working parents on a budget. This is cool, though, and the meals look way better than expected!

Ooooh these meals look yummy! I love quinoa breakfast porridge and that pizza looks like some serious business! Delicious! THe apple cobbler thing sounds delicious and I love your little heart bowl :) I probably would have loved the mix up too :X