My BFF Sheridan's 33rd birthday was on August 8th, but we didn't get a chance to celebrate it together until this past Saturday night. Sheridan lives in Little Rock, Arkansas, but she was in Jonesboro (our hometown) to do birthday party stuff with her family this weekend, so I drove up yesterday to see her.

Here we are with one of her birthday cupcakes! 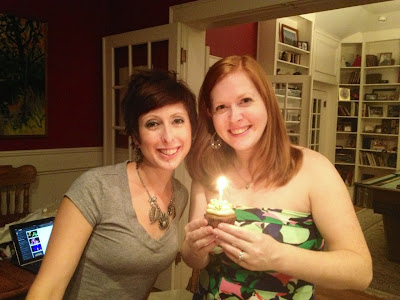 I make Sheridan's birthday cupcakes every year. She's vegan too! We usually go over recipes in Vegan Cupcakes Take Over the World, and she picks what sounds good. This year, she requested the Maple Cupcakes with Sugared Walnuts. 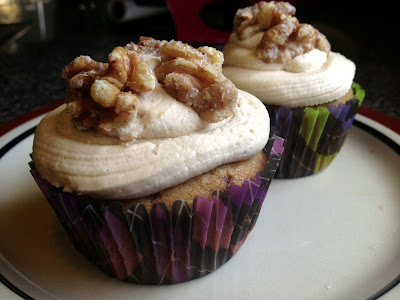 These cupcakes are sweetened with maple syrup and brown sugar, and there are sugared walnuts — made by toasting walnuts and then coating in a maple-sugar caramel — peppered throughout. For the frosting, I skipped the maple frosting suggested in the book since it calls for soymilk powder, which I don't have access to here (come on, Whole Foods, start carrying powdered soymilk!).

Instead, I made the Vanilla Buttercream from VCTOTW, but I added a dash of maple extract. Creamy maple-y goodness.

Making these cupcakes seemed like the perfect opportunity to try out my new bottle of Nielson-Massey Madagascar Bourbon Vanilla Extract. 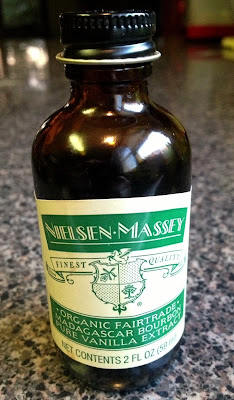 This was sent to me to review over a month ago, but I've not baked much lately. So this was my first chance to try it. I'll admit that I'm typically a cheap-o when it comes to buying vanilla. I do buy the pure stuff (no artificial vanilla here!), but I usually buy the store brand. I figure pure vanilla is vanilla is vanilla, right?

Wrong. I cracked open this bottle, and the most velvety notes of vanilla bean wafted through my kitchen. Unlike some of the vanilla I'm accustomed too, this stuff didn't have that strong alcohol smell. It was more like the scent of a freshly cut vanilla bean, which I'm also typically too cheap to purchase.

The Nielson-Massey vanilla lent these cakes and the frosting a delicate vanilla flavor that shone through despite all the maple extract in the recipe. It definitely make a difference. Plus, this stuff is organic and fair-trade, so you can feel and warm and fuzzy and ethical when you use it. From now on, I'll definitely spring for the good stuff.
Posted by Bianca at 8:59 PM

She has the same birthday as my dad! (Different year though of course.) :)
And happy belated birthday to her, you both look very beautiful in that photo!
Those cupcakes sound so delicious too. I normally use the cheap vanilla extract as well but this sounds really interesting. :)

I love following yr and Sheridan's friendship! It's awesome.
Have you ever tried to make yr own vanilla extract? I wonder how that would compare to this stuff. I usually buy WF's brand of extract, or Trader Joe's. Vanilla beans are expensive but a definitely worthwhile splurge.

Happy birthday to Sheridan! She's lucky to have someone to make her cupcakes every year.

Those cupcakes are the bomb and I am so spoiled to have you as a best friend - I always get the best treats! haha! Thanks again for coming to hang out! Love you!(Susan - thanks for the shout out! I really should blog again...I'm afraid I'm not as dedicated as Bianca!)

I usually get the Kroger brand vanilla, but I'm out, so I'll look into some high quality stuff!

Those look fabulous-I'm practically licking the screen!
I get powdered soymilk at my local Asian grocer. You might be able to get some there.