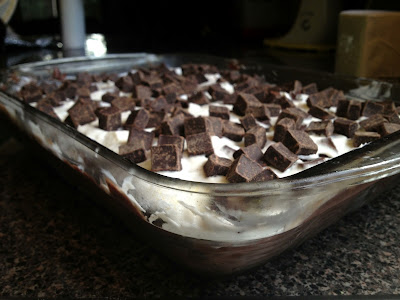 There was a layer of chocolate cake or brownies topped with chunks of candy bars and Cool Whip. And though some people would have been most excited about the chocolate part, it was the Cool Whip that made the happiest. I loved Cool Whip. I could have eaten a whole tub with a spoon if my Mama would have let me (Come to think of it, I bet Granny would have let me when Mama wasn't around. Granny let me eat whatever I wanted!).

Anyway, I remember LOVING that cake. I think I had it a time or two after that at various potlucks or parties, but my days of Death By Chocolate Cake have been long gone for years. But I've never stopped thinking about it. It's been on my "to veganize" list for years and years.

So last week, when I needed to think up a dessert to bring to Death Cafe, a local group that gets together once a month to discuss the process death and dying, this seemed like the perfect time to work on finally veganizing this magical cake.


Note: In case you're wondering more about Death Cafe, you can read a story I wrote for the Memphis Flyer about the local group. It's a national movement to take the taboo out of discussing death. I mean, we're all gonna die someday, right? Might as well be cool with it.

Before you die though, you should probably make this cake at least once. I'm thinking of including this in the 1980s section of my retro vegan cookbook. But here's the recipe!

Sift the flour, cocoa powder, baking powder, and salt into a large mixing bowl. Stir until well combined. Fold in the chocolate chips.

Pour the wet ingredients into the dry ingredients and stir until just combined. Spread the batter into the brownie pan.

Bake for 22 to 25 minutes or until the center seems set. It should bounce back slightly when touched. Set aside.

While the brownies are baking, make the pudding according to package instructions using the 4 cups of almond milk. Place the pudding in the fridge and allow to set.

Tear the cooled brownies into small pieces and place in a 9x11 glass casserole dish. Pour the 1/4 cup coffee liqueur over the brownies.

Once the pudding is set, spread it over brownie pieces. Pour half of the dark chocolate chunks over pudding layer.

Top with the entire can of vegan whipped cream (if using a box of whippable topping instead, you may not need to use the whole batch). Use a cake spatula to spread the whipped cream to cover the entire dish. Top with the remaining dark chocolate chunks. Refrigerate until ready to serve.
Posted by Bianca at 10:40 PM

The cake looks decadent and Death Cafe sounds interesting. I've been meaning to read a book called The Art of Death Midwifery for a while now.

Bianca, did you use the pudding that you have to cook? I tried to make pudding once with soy milk, and it didn't set. Mori-Nu makes a pudding mix that you use with silken tofu and it's ok, but not *great*.

I've been reading your blog ever since I decided to make the switch to veg, and I enjoy reading each morning! I love posts like this, because it's a reminder that you don't miss out on anything when you cut animal products out of your diet, you just do it in a less cruel, more sustainable way. :) Thanks for putting such great recipes and reviews out there!

Wendy, I did use the Jell-O brand pudding mix that you cook. Used almond milk and it set just fine.

This looks so decadent and tasty! It reminds me of a trifle my mom used to take to every family gathering, there were layers of brownies, pudding, crushed toffee and whipped cream. By the time we got to dessert it would be all mushed together and wonderful.

Yeeeeeeeeeeeees!!! This looks incredible. I love gooey chocolatey desserts and oh man does this fit the bill! Thanks for sharing the story about your family and the recipe!!

Have you had much luck with the Soy Whip? I bought it once for $7 and it literally gave me about an ounce before the canister stopped working on me. :(

I've never had a death by chocolate cake but it looks epic!

Amelia,
That happened to me and I wrote to them. They explained that not only should you store the can upside down, take it out 10-15 minutes prior to use and shake the product down to the squirter WELL.