Legend has it that barbecue nachos were invented in Memphis. Not sure how true that is, but when you google "barbecue nachos," almost every search result on the first page has a Memphis connection. So I believe it.

There are barbecue nachos on menus all over this city, and yes, there are even vegan BBQ tofu nachos at R.P. Tracks. But let's face it — fried tofu coated in tangy 'cue sauce is amazing, but it's not a great imitator of pulled pork barbecue. I really haven't found any spot-on imitation pork. The "pulled pork" barbecue recipe in Cookin' Crunk uses tempeh, and it's delicious. But it's not pork. Jackfruit coated in BBQ sauce looks an awful lot like the real thing, but it's all off texture-wise (Too soft? Not chewy? Can't quite put my finger on it). 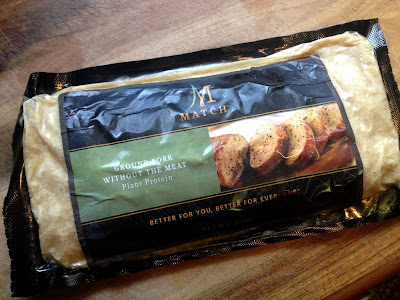 Last week, I shared a review of Match burgers, which are perhaps the meatiest vegan burgers I've ever tried. And same thing goes for this Match vegan pork. Tastewise, it's a spot-on imitator of meaty pork. And although it's not as stringy as pulled pork, the chewy texture is just right.

Like all of Match's ground meats, it comes frozen in a one-pound package. You simply thaw and cook just like you would with meat from animals. Just as animal meat isn't seasoned, neither is Match's ground meat without the meat. Match sent me several samples of their products to try (more reviews to come), but when I saw ground pork, I knew exactly what to do — BBQ Nachos! 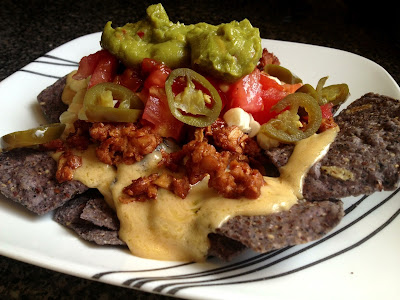 I thawed the pork, crumbled it into a skillet, and browned it in a little olive oil. Then I added enough bottled barbecue sauce to coat and cooked until the sauce was heated through. I used Food Should Taste Good Blue Corn Chips, Teese Nacho Cheese Sauce, raw corn cut from the cob, diced tomatoes, salsa, jalapenos, and Wholly Guacamole.

This was such comfort food. I've made this same meal for three days in a row now, and I could honestly eat this for three more. But I'm out of chips. Sadness. I did, however, have leftover pork that I refroze for later use. Unlike meat, Match can be refrozen without any concern of going bad. That's just one of the many advantages of using vegan meat. Of course, the fact that no animals died for these nachos is best advantage.
Posted by Bianca at 11:07 PM

I am still crossing my fingers that Match makes its way to Canada. I could probably eat bbq nachos three days in a row too, those look awesome!

Those nachos look amazing! I've been wanting to try Match meats ever since I got Kim's Skinny Bitch cookbook, but I haven't ordered any and they aren't sold here. So cool that they sent you some to review!

I have been curious since Skinny Bitch also. Do they sell it here?
Belinda Heflin

Hi Belinda! It's not available in any retail store in Tennessee. But it is available online.

Oh man, now I want nachos! I wanna try match meat too, I'll have to see if I can find some in California next month.