Happy Trail Mixes To You

I'm not sure how it happened, but a couple years back, companies just started emailing me all the time asking me to review their products. Now I'm not one to turn down free stuff, especially free vegan stuff from mostly small, independent vegan-owned companies. I don't want to be a free advertisement for conglomerates, but I love showing vegan companies some love .. especially when they're making awesome stuff.

Sometimes, just as a total coincidence, a few different companies will send me similar products around the same time. For example, over the past few weeks, I received generous trail mix sample packages from SunRidge Farms and Nativas Naturals. 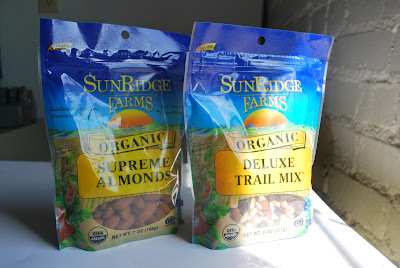 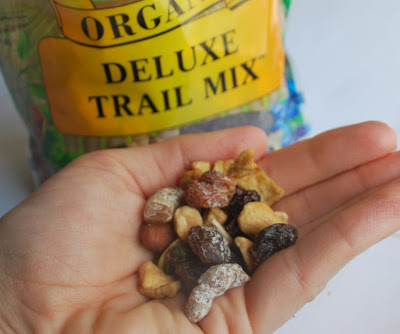 It's unsalted, and though I prefer salt in just about everything, the natural taste works here. Plus, I feel better about myself after eating handful after handful when it's not loaded with sodium. I like to grab a nut and a fruit and eat them in the same bite, so I tried different combos. The best were peanuts and dates.

Now I'll tell you more about the SunRidge Farms almonds in a minute. First, check out these Trail Mixes from Nativas Naturals: 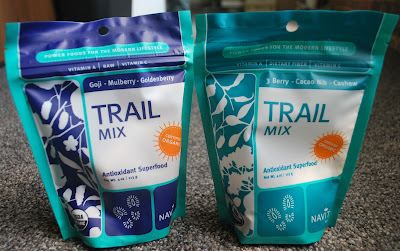 One has goji, mulberry, and goldenberry: 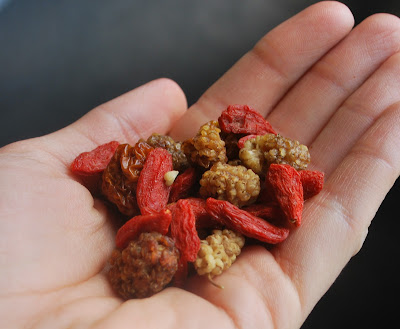 And the other has that same berry combo, plus cashews and cacao nibs: 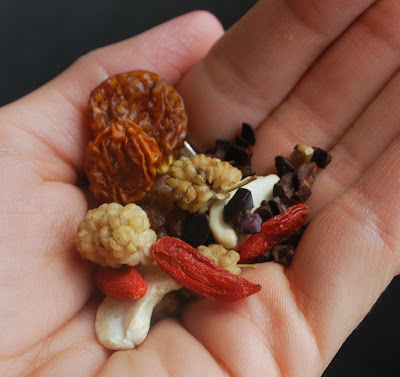 I'd actually tried the latter when I made my Forgiveness Mix from the Crazy Sexy Diet cookbook back in January.  I love, love, love the tartness of the berries, especially the goldenberries. And the mix with the nibs is just amazing. You've got bitter cacao, tart berries, and smooth cashews. With all those different attitudes, it's like an episode of America's Next Top Model in your mouth.

When I made Kris Carr's Forgiveness Trail Mix a few months ago, I combined the nib mix with pepitas and more cashews and put it in a jar on my desk at work for mid-morning snacking. Well, my co-worker Hannah helped me eat it, and then she made the same mix to replace it. Only she re-named it Friendship Mix because she thought Forgiveness Mix sounded hokey. After we finished Hannah's batch, we went on a Chex Mix kick and never replaced the Friendship Mix.

So I combined my SunRidge Almonds with the goji, mulberry, and goldenberry Nativas Naturals Trail Mix, and a new jar of Friendship Mix was born! 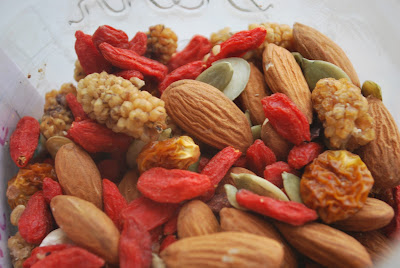 The clean, crisp almonds are the perfect complement to the tangy, dried berries. Plus, there were still some leftover pepitas in the jar from last time (score!)
Posted by Bianca at 10:08 PM

I love this post (and you) for three reasons:
1. Your ANTM crack
2. You spell complement correctly
3. You just helped me decide what my next trail mix will be made of. Yum!

Delicious! I love trail mix. I wish I could get free stuff. These are making me very hungry!

oh my gosh i need that trail mix in my life right about now! haha looks so good!

I love trail mix- it's the perfect healthy (but tastes like naughty snack food) snack!

Great looking trail mixes! I just made a home made trail mix as part of my friend's birthday gift :) It's so fun playing with new combinations! A jar on your desk at work sounds perfect!

I love a great nut and fruit combo. I'm glad you have the opportunity to share some independent vegan products.