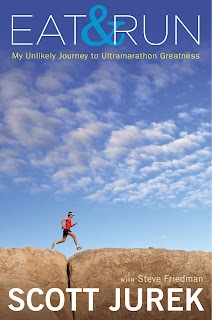 I'm sensing a theme here. My last post was about trying Vega powder in my pre-run smoothies. Now I promise not to get all runner nerd on you, but I must tell y'all about my new favorite book — Eat & Run: My Unlikely Journey to Ultramarathon Greatness by Scott Jurek.

Scott Jurek is a big celebrity in the vegan world. He's a world-renowed ultramarathon champion, and he's won race after race on a totally plant-based diet. In case you're wondering what qualifies as an ultramarathon, it's any race longer than the marathon length of 26.2 miles. Often for Scott, that means races of 100 to 150 miles in 100-degree desert heat. It sounds pretty crazy, but ultramarathoners are pretty much insane ... in the best way possible, of course. I've only completed a 5K length race, but I aspire to at least complete a marathon one day.

I'm fairly new to running. I used to go to the gym everyday and do classes in boxing, yoga, spinning, pilates, and rowing. And that was great. But then I started slowly teaching myself to run. And then that's all I ever wanted to do. Once I achieved the "runner's high" (which I never believed was real until I felt it myself), there was no turning back. I quit my gym, and now I run three days a week mixed with a couple mornings of yoga, toning, or aerobics videos.

Well, Scott Jurek's new book, which came out last month and is already on the New York Times bestseller list, is inspiring me even more. You see, Scott's book actually puts you there with him as he struggles through the grueling Hardrock 100 race on a swollen, bruised ankle (and wins!). You're by his side as he's puking on the side of the road during the Badwater Ultramarathon in Death Valley. He's a badass, and he's a vegan, which makes him an ultra-badass. I never would have thought a book about running would be a can't-put-it-down tome, but that's exactly what this is. Now that I've read it, I kinda wanna read it all over again. Even if you're not into running, Scott's devotion to living a healthy life and pushing himself to the limit is totally inspiring.

Not only does Jurek's book detail his upbringing, his early interest in running, his big wins and little losses, and his transition to a vegan diet. He also provides readers with his favorite recipes nestled into the end of each chapter. All are super healthy, whole foods-based recipes, like Lentil-Mushroom Burgers, Chocolate-Adzuki Bars, and 8-Grain Strawberry Pancakes. He also includes recipes for pre- and post-workout drinks, like a Coco Rizo Cooler (made with homemade rice milk, coconut milk, and chia seeds) and the Green Power Pre-Workout Drink (a green smoothie with banana and mango ... made it last week ... delish!).

For the sake of this review, I decided to try his Tamari-Lime Tempeh with Brown Rice: 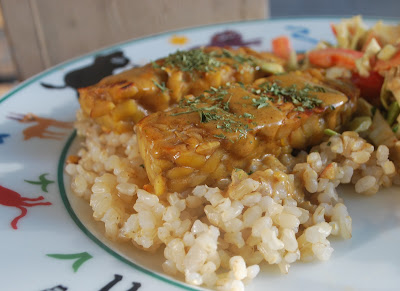 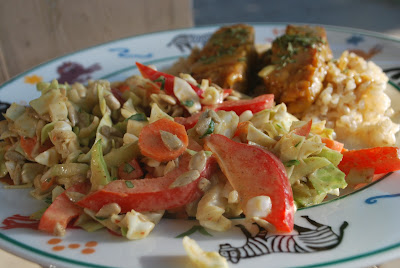 So good! Both dishes use the homemade almond curry sauce (almond butter, red curry paste, ginger, and some other stuff). It's drizzled over the tempeh, which is cooked plain and then seasoned with tamari and lime juice. Simple and delicious.

The slaw is cabbage, bok choy, bell pepper, carrot, and sunflower seeds mixed with more of the curry sauce. It's crunchy and cool and very, very tasty. Not to sound all Scott Jurek fangirl or whatever, but I'm in complete awe of how awesome he is and how far he pushes himself. And whatever he tells me to eat, I'll probably eat it. Of course, it helps that all of his recipes sound pretty mouthwatering.

I reviewed this book for the newspaper I write for — The Memphis Flyer — as well. So if you'd like to learn more about the non-food stuff, click here for that review. You have to scroll about halfway down the page past some other book reviews to see it (or you could read those reviews too!).
Posted by Bianca at 9:14 PM

What a great post! The book sounds really interesting, I'm definitely going to add it to my amazon wishlist :) The recipes sound great and that is so cool that you've gotten so into running! I've been trying so hard to like it but it just hasn't happened yet. Maybe one day I'll get my runners high and become a believer :)

Man! I am really not into running (though on occasion I try to be) but this totally sounds like something I would read. Thanks for sharing the review, I'm always looking for new things to read!

At the ripe ol' age of 26, I'm JUST now starting to understand the mental aspects of working out....which turns out it kind of the whole point. This book seems right along those lines! Great review. Not sure I'll be into the puking part.

I'm reading this right now and love it! It's really inspiring, especially because I am thinking about getting into ultrarunning.

Great review. He really dispels the myth of the protein-deficient vegan because, to run those distances without injury and in the times he does, you need to eat a ton of protein. I'm only running 45 miles a week and it really helps me to up my tempeh and tofu ;) I will have to buy the book now, Bianca!

sounds like an incredible book! and that slaw looks fab! great review!

This guy is a beast. He did a special promoting this book in a Runner's World edition a few months back. Shared a recipe for Vegan Brownies, so good!

I'm with you on the runner's high thing. Never thought it existed, now I can't get enough.

I've been meaning to check out this book. So glad you reviewed it and enjoyed it! I need some running inspiration, seriously. Those dishes look and sound amazing too!