Yes, that's right. I said "low-fat banana split." Did I get your attention? I mean, come on. Banana splits are AWESOME!! But low-fat they're typically not, what with all that ice cream and syrup and nuts and stuff.

But if there's one vegan who can make anything low-fat, it's Lindsay Nixon (a.k.a. the Happy Herbivore). I have her 2012 wall calendar, and I've been making the recipe o' the month every month this year. Imagine my delight when I saw that June's featured recipe was the Herbie Banana Split: 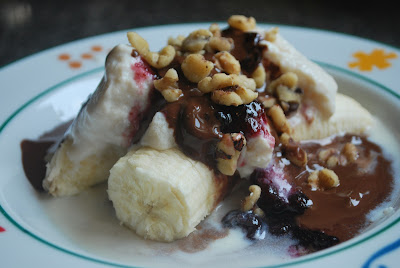 Let me break it down for ya. The ice cream is a homemade tofu-based version made of nothing but silken tofu, maple syrup, and plant milk. You throw it all in the ice cream maker, and voila! The chocolate syrup is from this recipe on the Happy Herbivore site. It's just cocoa powder, agave, water, and cornstarch. The fruit sauce is slightly watered-down blueberry jam. Oh, and the walnuts and banana are, well, just walnuts and a banana.

It's so good y'all, and an individual portion doesn't really have all that much sweetener so it's fairly low-cal and totally low-fat! Now, since the ice cream is made with tofu and very little sweetener, it does still taste a tad like tofu. But that's okay when you smother it in chocolate syrup, jam, and nuts. It's super creamy too!

Nothing says, "To hell with you, 100-degree Memphis summer!" like a low-fat banana split, right?
Posted by Bianca at 10:09 PM

oh my gosh, that looks so delicious! i could totally go for a bowl right now!

Can I have that for breakfast??! The weather here in Memphis is certainly hot enough to justify it!

This looks delicious! Totally am going to try making the chocolate sauce.
I kinda have my own version of a low-fat "banana-split" pour chocolate syrup and nuts. It's my lazy and healthy way to eat a banana split ;)

What a good idea! I am trying to eat more healthy desserts. Now this one is on the list.

It's winter down here in Australia at the moment but I still want some of this! :-)