My partner Paul and I celebrated our eight-year anniversary Friday night with a semi-fancy dinner at Ciao Bella, a vegan-friendly Italian joint. So tonight's post is all about that.

But first, I need to announce the winner of the Healthy Surprise giveaway. There were crap tons of comments, but random.org selected one lucky lady —Lesley of Lesley Eats! Lesley, who happens to live just a few hours down the road in Nashville, takes beautabulous photos of all sorts of vegetarian goodness. If you're not familiar with her blog, you should check it out. Congrats Lesley!

Now on to the dinner date. Paul's an omni, and he's a picky, picky eater. When we have dinner dates, we pretty much have to stick with Asian or Italian. Most Italian places around here have a few vegan options, but Ciao Bella totally deserves the title of "Most Vegan-Friendly Italian Joint." Chef Jonathan Steenerson is always happy to whip up something special for a vegan, even though there isn't much in the way of vegan offerings on the menu. He usually keeps vegan cheese on hand to make a grilled mozzarella appetizer, and he does vegan pasta right.

Chef Jonathan was out when Paul and I were there on Friday night, but whoever was cooking didn't disappoint. We started the meal with Bread and Garlic Olive Oil and Side Salads: 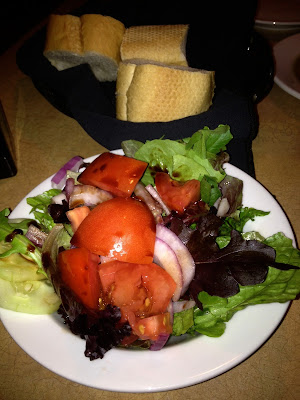 For my entree, I decided on pasta since I'm a carb queen. The server asked what veggies I'd like in my primavera, and I said "I like all vegetables. Just throw everything in!" And they did just that with this super veg-heavy Pasta with White Wine Sauce and Veggies: 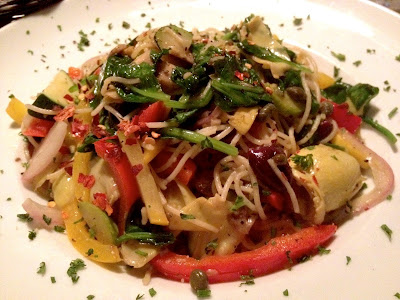 Of course, I washed it all down with a glass of merlot: 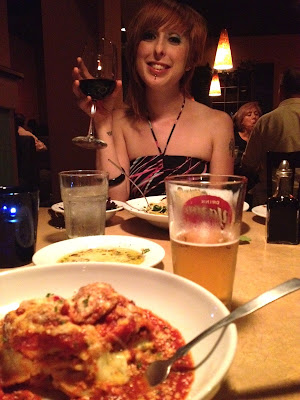 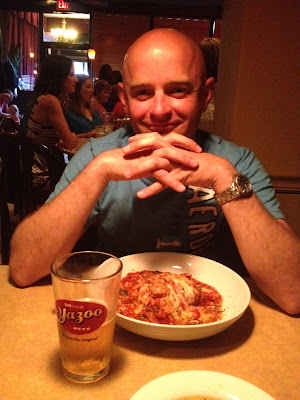 We had a lovely meal and stuffed ourselves silly (so much so that I had to skip the vegan sorbetto that's usually offered for dessert). Our server was nice enough to snap a quick pic of the both of us with Paul's phone: 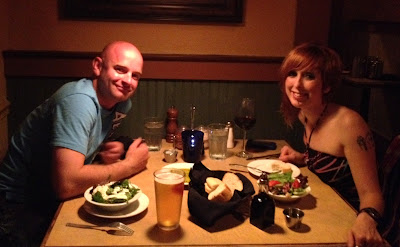 How sweet! Very cool pasta dish. I love it when they know how to pile on the veggies!

happy anniversary! i always say the same thing when asked at restaurants what veggies i like. "i love every vegetable, put 'em all in!" that pasta dish looked awesome ;)

Happy anniversary! Jason and I have also been together for 8 years- I guess 2004 was a good year all around ;)

Happy Anniversary! Looks like a great night and a yummy dinner :)

That pasta looks amazing! So colorful! Also congrats on 8 years, you guys are super cute. Hope it was a blast! :)

And happy anniversary! I *love* Ciao Bella. It's been a favorite since it first opened. It's very kid-friendly, too, which is much more important now than 10 years ago. :)

WOOHOO!! Happy Anniversary, you perfect couple, you. :) Glad you two had such a great time! Looks like a fantastic pasta dish, yum...

To many more years to come! *cheers*

Congrats on 8years!! What a great meal- i have only had the best results when i call ahead to request the kitchen make me a " no dairy no eggs vegetarian meal with lots of veggies", when going to veg challenged restaurants.
And you and your sweetie are adorable ;)

Happy anniversary! My husband and I celebrated our 1st year together this May. (I'm a late bloomer...just married for the 1st time at 48.)

The pasta looks great. I just joined blog lovin (blog something) and yours popped up. I started a blog about food that is now about vegan food...check it out. www.thefoodway.blogspot.com I am new, but love input, want to network with the many wonderful vegan bloggers, and I put up lots of photos!

Happy Anniversary! Appreciate you both sharing this special occasion with us readers :-)