Y'all know how I love hot stuff, right? But you probably didn't know that I'm also a hoarder of jams and jellies. Well, I am. I love all things jellied that come in cute ass jars. I've been known to store a jar of jam for 2 years before cracking it open just because I like to look at it on my shelf. But when Jenkin's Jellies sent me full size jars of all four flavors of their organic pepper jellies, I knew I'd be cracking these open immediately. My pit bull Maynard couldn't contain his excitement either: 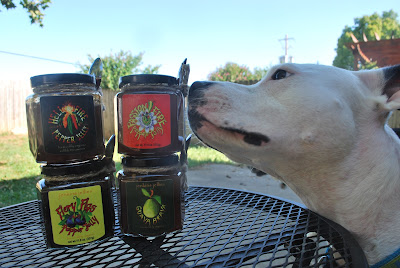 Each jar comes with a tiny little spoon with a sticker that says "Stir me." So like Alice in the rabbit hole, I followed the instructions. Here's a close-up of Jenkins Jellies' signature flavor — Hell Fire Pepper Jelly: 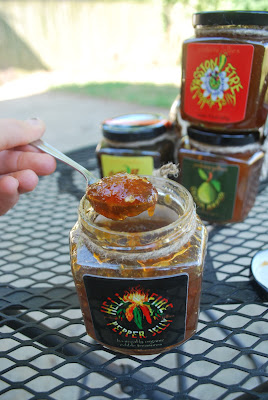 They also included Passion Fire (peppers + passionfruit), Guava Brava (peppers + guava), and Fiery Figs (peppers + figs). Each jelly has its own distinct flavor. Hell Fire is definitely the hottest, but it's not overpoweringly spicy. Spice-a-phobes could probably even handle the heat, but then again, I'm not the best judge of heat levels considering that I bathe everything in mounds and mounds of sriracha. The Guava Brava was the sweetest, and the Passion Fire has a nice sweetness to it as well. The Fiery Fig had the most savory flavor and seemed like the best of the four to use in a salty-sweet dish.

So what to do with all this pepper jelly? Well, I had to get a little creative. First, I tried the Hell Fire Pepper Jelly straight up spread onto a slice of my Wartime Wheat Bread (which I blogged about here). Delicious on its own! 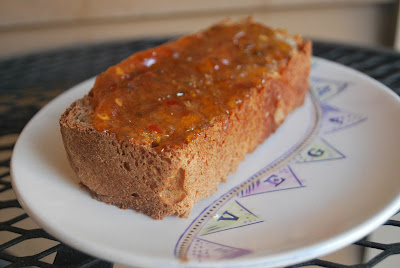 I also tried the Hell Fire spread over toast with Tofutti cream cheese, but I forgot to snap a picture. Vegan cream cheese and pepper jelly may be one of the best combos ever.

Last week, I made the Jalapeno Garlic Grits from Vegan Brunch for breakfast. And just as I was plopping my serving in a bowl, I thought, "I bet this would be even better with a scoop of Guava Brava." And it was. The perfect combo of savory, sweet, and spicy: 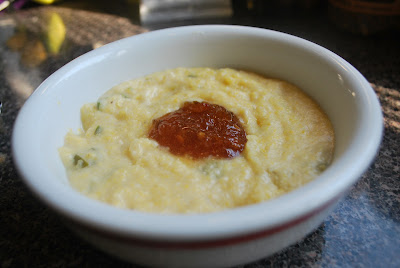 The samples came with a card promoting a soon-to-be released Jenkins Jellies cookbook called Sweet Heat: Cooking with Hell Fire Pepper Jelly. On that card, there was a list of ideas for how to use pepper jelly, which included this tip: "Spice up your peanut butter sandwich." At first, that sounded weird. But the more I thought about it, the more it sounded like spicy Thai food peanut sauce. And I like Thai food, so what the hell? I tried a PB&PJ (that's peanut butter and pepper jelly) sandwich, but I failed to photograph it. I did, however, snap a pic of my similar breakfast this morning — Passion Fire Pepper Jelly and Almond Butter on a Whole Wheat Bagel: 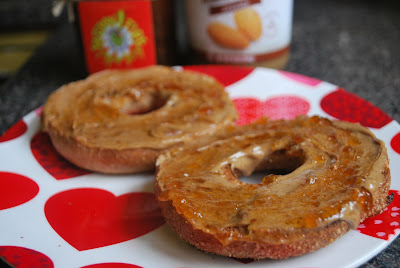 That list of ideas also mentioned the possibility of using pepper jelly as a glaze for meats. When I see the word "meat" with my vegan goggles, it magically transforms to "tofu." Pepper jelly glazed tofu sounded magnificent! So I googled and found this recipe for Red Pepper Jelly Glazed Tofu: 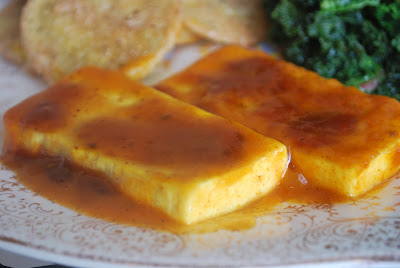 I used Fiery Fig for this, but the glaze also includes orange juice, curry powder, soy sauce, and a little cornstarch to thicken. Perfect with a side of steamed kale and deep-fried squash.

Conclusion: Jenkins Jellies are pretty much the best thing ever! They're made by actress Hillary Danner (Gwyneth Paltrow's cousin) and her friends Maria Newman and Chef Jared Levy. There are no artificial ingredients or preservatives. They're gluten-free and organic and just fabulous all around. They're only available in select stores, but you can order jars online here.
Posted by Bianca at 10:59 PM

YUM...these would be amazing over cashew cheese and crackers.

Ha, I have vegan goggles that automatically translate meat into vegan protein, too! These spicy jellies look so great; I would love to try them.

Those all look so good! how lucky for you to get to try them. I'll definitely be watching out for some where I am.

They look so cool and delicous! Those jars are very cute! :)

Everything looks awesome, will have to try them out and make the tofu & I love the thought of adding kick to a peanut butter sandwich.

Vegan goggles! - thanks for the smile this morning....

I love pepper jellies- my favorite way to eat them is to mix with cream cheese and serve as a dip :) I also love Maynard!! Too cute!

Those jellies look amazing! I love to make funky PB&J sammiches with hot pepper jelly. Maynard is too cute! =)

oh yum! i love that you made savory grits with them!

Yum! And the packing idea is so nifty! P.S. I love your pup!

I love me some jams as well. This reminds me of sweet fire: sweet pickled jalapenos. I definitely want these.

I need that guava brava in my life!!