Back in my early vegan days, I only owned a handful of formal vegan cookbooks. There was How It All Vegan by Sarah Kramer and Tonya Barnard, Robin Robertson's Vegan Planet, The Vegan Sourcebook by Joanne Stepaniak, and a few other oldies-but-goodies. Plus, I had a few vegetarian cookbooks that I used to veganize recipes.

But most of my recipe ideas came from vegan cookzines back then. Among my faves were The Cheap Vegan (my first vegan cookzine, a compendium of affordable vegan recipes including an old-school seitan recipe using only whole wheat flour and water ... yep, no vital wheat gluten ... we're talking old, old-school seitan) and a teensy-tiny little old thing called Rabbit Fodder Addict. Both were written by vegan zinester Stephanie Scarborough.

Rabbit Fodder Addict was no bigger than the palm of your hand, and it contained about 15 or 20 easy-as-vegan-pie recipes. I've probably made everything in there. The Rabbit Fodder Addict zines were part of a series put out by Portland's Microcosm Publishing, but I only had one. I think it was #3 but I can't be too sure. I recently remembered this beloved little handmade book and went searching for it on my cookbook shelf. My collection of cookbooks has grown to nearly 200, and all those giant, colorful, professionally published volumes must have completely swallowed up my tiny Rabbit Fodder zine. It's nowhere to be found. Most likely, it's stuffed in the pages of a bigger book, possibly swallowed up for an eternity. Sadness.

Thankfully, I do remember my favorite recipe from the book. I was recently reminded of it when trying to think of some old breakfast standards from my early vegan days. It's really been years since I've had this Tofu Bagel Breakfast Sandwich: 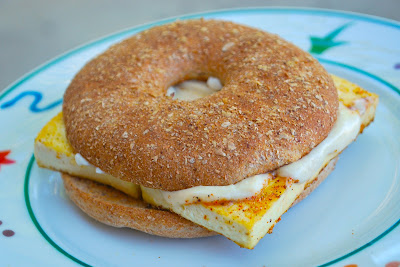 I don't remember what this was called in the book. But it's quite simple. Plain tofu fried up with Cajun seasoning and topped with vegan cheese (I used the Daiya Jack Style wedges), stuffed into a bagel spread with Vegenaise. Simple and delicious. I remember making this with Tofutti vegan cheese slices or Vegan Rella back in the day because that was all we had around here. Ha! My how the vegan world has changed over 7 years.


Does anyone else remember the Rabbit Fodder Addict series? What were your first vegan cookbooks?
Posted by Bianca at 10:44 PM

That sandwich looks so good! My first vegan cookbook was Vegan with a Vengeance :) Fond memories ha!

Looking good indeed. My first vegan cookzine was the infamous Soy Not Oi! that came out in the 80's. Bought my copy in 1997, od'd on the peanut butter chocolate chips cookies and probably not much else.
I'm not old, I'm old school!

Wow, 200 cookbooks! I used to think I would eventually have tried every recipe from my coobook collection (30 books or so), but now it's silly to think that, since new vegan books come out all the time. Cant't wait for yours!

That bagel looks great, and with those Havarti wedges, it must be even better. I love those wedges so much, but I can't buy them too often, because I eat them in 24 hours... and that's obviously not too good for my weight! Hopefully, I'll get over it and become reasonable... same thing happened with the Daiya shreds became available.

My first vegan cookbooks were How it All Vegan, Vegan Planet, Fresh and Fast Vegan Pleasures by Amanda Grant and The Vegetarian Manifesto by Jay Fothergill.

I'm super jealous of how many cookbooks you have sent to you :) I used to buy them pretty frequently, especially when I first went vegan, but now I mostly just get them from the library. Not yours though, I will of course buy that one :) I'm also craving a breakfast sammy now!

Sandwich looks awesome!my first vegan cookbook was tofu cookery by Louise hacker. Still love the barbequed tofu from that book. Wow 200 cookbooks.I think I only have about 20. Not sure of the name of that recipe but hopefully you find your cooking zine.

Sorry I meant louise hagler.you can definitely tell I am typing this on I phone lol

Wow that looks SO good! Thanks for sharing!