I've always loved smoothies, but I've never really understood when to drink them. I prefer a solid food breakfast, so that doesn't work. And they always seemed a little too un-carby for my afternoon pre-workout snack. I was always famished by 4 p.m. and a smoothie didn't always power me through a workout.

And then two things happened: 1) I quit my gym and started running outside, and 2) the thermometer reached 100 degrees. Without a safe, cool gym to run in, I was only left with one option — become a morning runner so I could take advantage of the Memphis morning air when temps are still in the 80s. I never, ever thought it would happen. But it did. I now happily ignore the snooze option to wake up at 6 a.m. and hit the pavement. And there's only one thing I want at 6 a.m. — SMOOTHIES!! Those are, of course, followed by a proper solid food breakfast at 7:30-ish. So I really get two breakfasts now!

Shortly after I made the transition from post-work work-outer to pre-dawn fitness queen, I was generously offered some samples of the new Vega Energizing Smoothie powders. I'd never tried Vega before, but I've always heard mixed reviews. Some said it tasted okay, and others said it wasn't so good. But these new flavors boast "Improved Taste!" And I do believe they're right. This stuff is amazing!!

They sent me five flavors to sample, and I loved every single one: 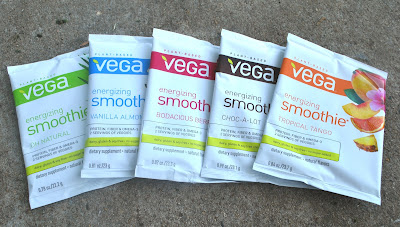 Most often, I blended my Vega powder with a frozen banana and some plant milk (usually Blue Diamond Almond Coconut ... omg, I'm loving this stuff, btw). That was the combo I used for this Vega Choc-a-Lot Energizing Smoothie: 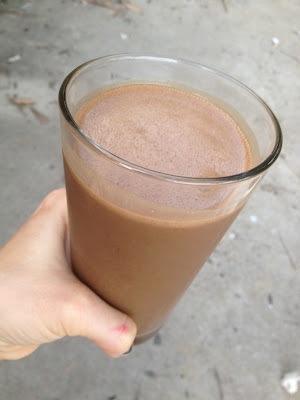 I mixed things up by blending frozen strawberries and almond coconut milk with this Vega Bodacious Berry Energizing Smoothie: 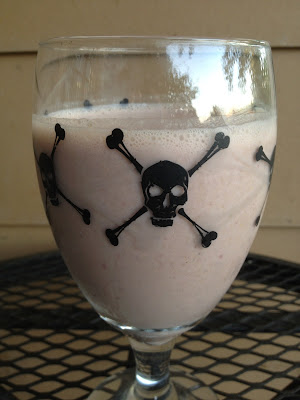 And I went back to banana, plus added some spirulina powder, in this Vega Oh Natural Energizing Smoothie (which, by the way, was my favorite flavor ... just plain vanilla ... I know that might sound lame, but it was almost buttery tasting. Yum!): 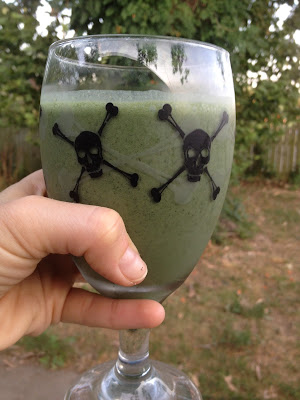 After all five packs were gone, I was kinda sad. So I scoped out the Vega tubs for sale at Whole Foods. Turns out the stuff is pretty pricey — around $30 for a 16-serving tub. But even though I'm cheap, I think this stuff might be worth it. In every serving, there's around 10 grams of protein, 5 grams of fiber, and omega-3s. Plus, every pack contains two servings of veggies. I may have found my new pre-breakfast drink!
Posted by Bianca at 10:53 PM

my whole foods circular currently has a $5 off coupon for one of the tubs, maybe yours does too?

The Natural flavor (I think you said this is your favorite) is on clearance here: http://www.luckyvitamin.com/p-254068-vega-energizing-smoothie-oh-natural-94-oz-clearance-priced?utm_source=googlebase&utm_medium=fpl&utm_term=VegaEnergizingSmoothieOhNatural94ozCLEARANCEPRICED&utm_content=116580&utm_campaign=googlebase&site=google_base&

That Blue Diamond Almond Coconut milk is awesome. It's my plant milk of choice these days.

After for smoothies, I made one for breakfast today, after lifting some weights. Both things were new for the morning! Lol.

Those skull glasses are pretty awesome.

I've tried making smoothies with those powders before. Unfortunately they tend to give the smoothie a synthetic taste.

Those skull glasses are so awesome!! I agree, that is a perfect time for a smoothie. I'm a big fan of these vega packets too and the nutrition they provide. The choc-a-lot is pretty awesome. The only other flavor I've tried is vanilla almondilla. The other ones sound interesting though, I'll have to scope them out and be creative with my smoothies :) Oh and the Almond Coconut milk is amazing. I love that stuff!

I love that Skull Glass it makes smoothies look awesome!

I'm supposed to be reviewing these shortly soon, too. After reading yours, I kinda can't wait ;)

I love Vega and highly recommend it. I recently did a review of Vega One; if you're interested, check it out here:http://thecrueltyfreereview.wordpress.com/2012/06/28/vega-one-nutritional-supplement/
I know it was helpful for me to read personal reviews before spending such that much money on it.

These smoothie powders sound awesome! I can't find them in ol Japan, but I make a smoothie before my run of 1 frozen banana, 1 pack of baby spinach, half a block of silken tofu, soy milk, stevia and vanilla extract to taste. You don't taste the spinach in smoothies at all, as you know with your green smoothies from January. Then I go on my run with my iPod Nano Nike+ feature. I bought one for my friend so he can keep tabs on me, since it sends the running data to Nike+ every time I plug it in. We keep tabs on each other that way, so we don't skip any runs!

You would have a skull cup that you drink smoothies out of. Because you're a badass.

I, too have become a morning runner now that it's summertime and school's out! It's pretty much our only choice if we don't want to die of heat stroke. And I've been drinking smoothies every morning! They seriously keep me full until lunch. I'm packing my Magic Bullet for when I'm in Atlanta for a couple of weeks.

I am totally a Vega addict despite the price. :-) The improved smoothies really are better.
For running, try the pre-work out energizer. It is lightly caffeinated (I otherwise gave up caffeine), but if you're ever having trouble mustering up the get-up-and go, this does the trick. Vegan triathletes have the answer.

I adore smoothies! I usually use almond milk, a banana, frozen fruit, spinach, and flax seed or oil. I might have to try Vega out and see how I like it.

i got some samples of this in my conscious box and i thought it tasted like chalk! maybe i didnt pick good blending ingredients...