I wanted to title this post "Ch-Ch-Chia," but a quick Google search revealed that I've already used that title for another post back in 2010. It's a shame when you've been blogging so long that you start using the same titles.

Anyway, tonight's quick post is all about the mighty chia seed. I've never been a huge, huge fan of chia seeds. They're cool, but I'm not really a health food nut. I'll take a bowl of vegan chocolate pudding from a box over a bowl of chia pudding any day. But I do try to eat healthy sometimes, especially before my morning runs.

I save the naughty stuff for later in the day. For example, I may have ended my night with deep-fried vegan calamari (from Imagine Vegan Cafe) and a vegan rice crispy treat (prepared by my friend Stephanie of Swell Baked Goods, sold at Imagine), but I started my morning with this Coco Rizo Cooler from Eat & Run: 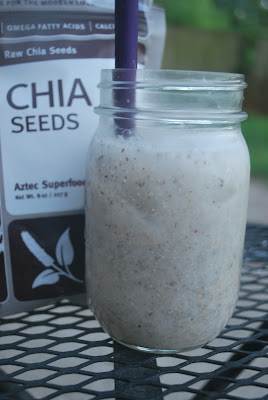 I used some sample seeds sent along with a review package from Nativas Naturals (yes, the raw food companies have been sending me a lot lately, and I'm very grateful!). In the past, I've only used chia seeds to make thick puddings and overnight oats, both of which get a little more gelatinous than I feel comfortable eating. But since you can drink this beverage immediately after blending, it doesn't get too thick and weird. In fact, the chia seeds gave this drink a bit of heft, which helped it keep me satisfied on my three-mile run.

Chia seeds are a great source of omega fatty acids, and they contain more antioxidants than flaxseeds. They're also an excellent source of fiber, and they even have a bit of calcium too!
Posted by Bianca at 10:48 PM

I've used chia seeds a few times in baking, but that's it. I have a big ol' bag of them in my fridge, I need to use them for something yummy like this!

I've begun to like chia seeds too. They definitely are an acquired taste I think. This sounds so good though! Can't go wrong with coconut milk and I bet it is the perfect way to fuel a run! Every post from this book is making me want it more and more!

Oh and I'm so jealous of all of your raw food samples!