My co-worker/cubicle neighbor Hannah came back after lunch today and said, "I think I'm gonna throw up. I just ate fried for lunch."

Well, that may be a little too much fried. I mean, all that would taste delicious while you're eating it, but I can imagine not feeling so hot an hour later. But a little fried food every once in a while is healthy. Maybe not in a nutritionally beneficial way, but in a healthy for the soul way. That's what I believe, anyway.

So I indulged in a little "healthy" fried splurge too — Fried Squash from my so-close-to-coming-out-I-can-taste-it cookbook, Cookin' Crunk: Eatin' Vegan in the Dirty South: 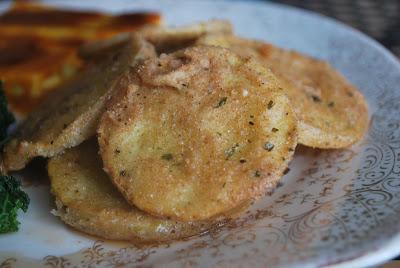 I grew up eatin' this stuff every summer. My mama would bread and batter fresh summer squash and toss it in a pan of hot grease. Then she'd drain it on paper towels, add a little salt, and voila. There's no better way to enjoy summer squash.

I ate mine with yesterday's leftover Red Pepper Jelly Glazed Tofu and some steamed kale to balance out all the grease.

You can pre-order my cookbook here on Amazon. The cover image STILL isn't up and I'm not sure why, but I can assure it looks awesome. It should be out next month-ish if all goes as planned!

While we're talking announcements, my friend Mary Wilmer, former cookie magician behind Intention Cookies (a now-defunct vegan cookie company that promoted cruelty-free livin' and good karma) has asked me to mention her cookie partner-in-crime Terry Bradford's IndieGogo campaign. He's trying to raise money to create a DVD and CD of a recent concert he had filmed. Bradford used to sing back-up for Celine Dion, and now he's trying to branch out into his own musical career. In fact, that's why Mary and Terry stopped making Intention Cookies. They wanted to devote more time to music. Anyway, if you're interested, here's the link to the fund-raising campaign.
Posted by Bianca at 10:52 PM

So if i promise to pre-order the book, can i get a tip or 2 on breading without eggs?:) Because i could tear the ass out of some fried pickles right now, after seeing how yummy your squash looks. before going vegan, i always did the flour-egg wash-breading thing, and i figured i could try a cornstarch slurry in place of the egg, or maybe soy "buttermilk".

I totally agree! Fried foods take me back to my childhood. They are great soul foods :P
I cant wait for your cookbook!

That fried summer squash looks amazing! Fried foods are yummy but always make me feel yucky so I try to avoid them. I could totally go for some perfectly cooked french fries though ;)

Oh wow! Fried squash. That looks so nice right now! I would love to over indulge on that.

That looks so delicious!