I suck at failure. I've been an overachiever for pretty much all of my life. Well, actually I guess it started in fourth grade, the first year I ever made straight A's. From then on out, I aced my way through high school (valedictorian) and college (graduated with the highest GPA in the journalism department!).

When I do fail at something, I get pretty upset. I'm like Jessy Spano in that episode of Saved By the Bell when she gets a B and freaks out and says, "What's that funny looking letter by my name?!" Yep, that's me. That's how I felt tonight when I totally failed at Potato Pancakes: 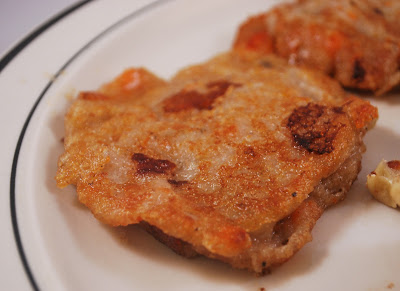 I was trying to veganize a few wartime dishes for my new Vegan Through the Ages cookbook project, but I added too much liquid to the potatoes. And then I had to add way too much flour to make them hold together. The result tasted like flour with some potatoes in it. So I'll work on that. I don't like taking no for an answer. Don't worry. I'm not gonna be all Jessy Spano and pop a bunch of caffeine pills to stay up perfecting potato pancakes ("I'm so excited! I'm so excited! I'm so ... scared! ... god, I love that episode). I'll get back to these at a later date.

I did, however, have one success tonight — Cauliflower Cheese with Tempeh Bacon: 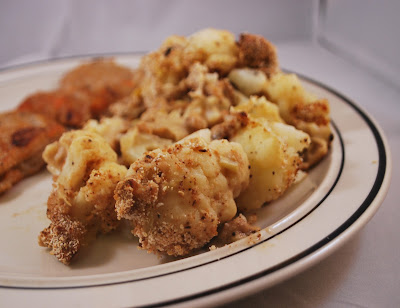 This is actually a British recipe, and it dates way back before the 1940s, but I got the idea from a cool blog called the 1940s Experiment, on which blogger Carolyn Ekins lived on 1940s rations for a year in an attempt to lose some weight. She posted a recipe for cauliflower cheese with bacon on her site, and then I poked around the internet some more and found several other versions. My vegan version is loosely based on all of those, taking inspiration from several. (Interestingly, it appears Carolyn has gone vegan since she began the 1940s Experiment. While many of her recipes from the blog's early days contain meat, now she's posting about lentil sausages and vegan cheesecake! Score!).

The photo really doesn't do this dish justice, but just trust me when I tell you it's tasty. Basically, my version is steamed cauliflower topped with homemade tempeh bacon, sauteed leeks and garlic, and a nutritional yeast-based cheese sauce. I also added breadcrumbs, but I may leave those out in the final version. The crumbs seemed to absorb the cheese sauce and make it not as creamy as I wanted. Nonetheless, I was pleased with how this dish turned out. It's hard to go wrong with tempeh bacon, cauliflower, and nooch sauce, right?

Anybody got any advice on perfecting tater pancakes?
Posted by Bianca at 10:58 PM

Oh, Jessy Spano. Who could ever forget that poignant, riveting episode? ;)

oh how i loved the jessy spano speed episode. i love that you referred to it. you're awesome. and the cauliflower dish looks and sounds awesome ;)

Hahaha that episode was a classic! Glad you didn't go that route too ;) I'm like you, a perfectionist and overachiever. I am sure that you will make a perfect potato pancake dish! The cauliflower looks amazing!

This is my go-to potato pancake / latkes recipe:
http://www.meettheshannons.net/2010/12/betty-crocker-project-latkes.html

Most recipes require draining the shredded potatoes of their juices but this recipe works around it. Also, you can probably pan-fry these if that's your thing.

As soon as you mentioned Jessy Spano I immediately thought of the speed episode- hilarious!

Tater pancakes! Oh my... I've heard of them but never tried any. I need to hop on that train A-sap!

they look delicious to me! and that cauliflower dish is pretty awesome! mm!

Ba ha ha, I totally forgot about Saved by the Bell...haven't seen it since I was a kid! And I take failure pretty hard too, but I also concede that failure leads to lots of learning. You'll totally ace the potato pancake thing!

I hate failing too, especially with recipes - that's why I rarely make my own because I trust tried and true and haaatte wasting food if I don't know it'll come out right. The cauliflower cheese sounds awesome, though. I like that rationing idea. I'd be more into it for economic reasons, though, than weight loss.

You might be able to add a little vital wheat gluten as a binder. It works really well for bean burgers. Also, maybe make potatoes that are pretty fluffy. Possibly bake instead of boil them so there's no excess water?

Lol. My name IS Jesse and I have freaked out when I got a B. Just like her.

Except for the time in Genetics when I cried with joy when I got a B. :)

Thank you for those SbtB references - that is seriously my favourite episode ever.

Your post made me laugh out loud. I can definitely remember Jesse Spano singing "I'm so excited, I'm so excited... I'm so... scared!!" Haha. Don't worry - you might have just needed to squeeze more water out of the potatoes after shredding them. I squeeze them with a clean towel for at least 5-10 minutes to get them perfect. Good luck!

This gives all of us lesser folks hope, even the best screw up (I thought it was just me). Thanks for the Jessy Spano memory.

Appreciate the self-reflection here. Very useful today! Thanks for continuing to blog.

haha i'm the same way when i mess up a recipe. soul-crushing. potato pancakes are tricky! the key usually is to rice them. i held out from buying a ricer fo ra long time, but finally did and all my potato dishes has improved b/c of it!