My next cookbook will focus on veganized versions of trendy foods throughout the last century. Originally, I planned on sticking to the retro 1950s, 1960s, and 1970s. But now I'm sort of thinking of going a little further back to the early 1900s (rolls with currant jelly, anyone?) and a little more forward to the Asian fusion cuisine-loving 1990s. Maybe.

I still have plenty of time to figure it out because right now, I'm focused on the 1950s and 1960s ... partly because I'm working my way through Mad Men, and I draw a lot of inspiration from what foods are mentioned on the show. For example, I'm pretty sure I heard a mention of chicken salad sandwiches the other day. Those are so very retro! So I created a vegan Tempeh Salad Sandwich instead: 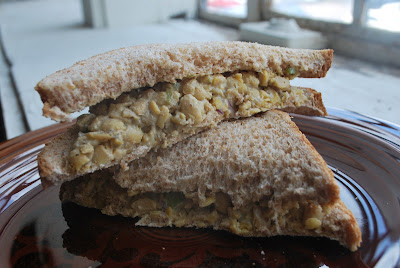 Yes, that picture is pretty brown. Sorry. But I swear it was delicious. First try and it came out perfect. I've made plenty of vegan egg salads in my day, but I've only experimented with vegan chicken salad a few times.

To make up for that drab, brown picture, check out the Side Salad I ate with my sandwich: 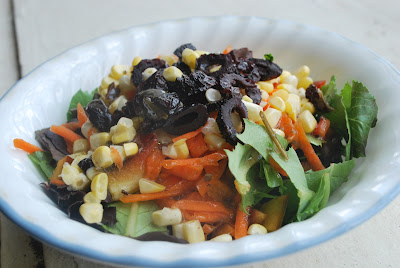 Those olives on top are the "gourmet" part of this post. They're Organic Raw Peruvian Botija Olives from Sunfood. Sounds super fancy, huh? These little raw olives are sun-dried and pitted, so chopping them for a salad is a cinch (I HATE pitting olives!). 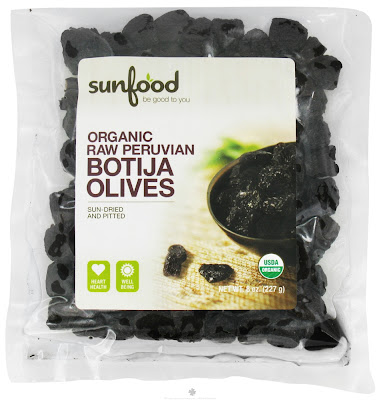 Sunfood sent me these in a package of samples to review on the blog. These are, by far, my favorite among the samples they sent. I've seen recipes call for raw olives, but I've never been able to find them. They're soft and chewy. Despite being sun-dried, they don't require rehydration. And they have a strong olive flavor that would only be appreciated by a true olive lover. Thankfully, I adore olives!
Posted by Bianca at 9:25 PM

Ohmygod. I am OBSESSED with raw sun-dried olives right now! Yes. and Yum.

Nothin' wrong with a bit of beige food! Your sammie looks delicious!

I love olives, so those sound great to me! I also love tempeh-salad sammies!

oh my gosh! i used to love chicken salad! and raw olives? those sound so freakin awesome. i love olives.

oh my gosh, i need some of those ovlives in my life! haha...and that sammie sounds delicious!

That brown sandwich looks pretty awesome to me. Soft bread with a creamy filling... yum. I haven't tried the sun dried olives yet, but I am a major olive lover and they look fantastic. Are they salty?

I thought olives were usually raw... they're not?