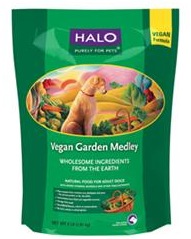 My oldest dog Datsun used to be vegan. Yep, he's one of those "used to be's." But it's not his fault. It's mine. He was vegan until we took in an abused pit bull mix last year. With one more mouth to feed, I really couldn't afford the $45 a bag for V-Dog anymore. Both dogs eat 4 cups a day, so that would mean twice as much money. Oh, and I have 6 cats to feed too. So reluctantly, I put them back on the non-vegan Whole Foods brand dog food.

But when Halo offered me a free sample of their new Vegan Garden Medley, I jumped at the chance. I knew the boys would love it! The first few ingredients in this dry food are green peas, chickpeas, pearled barley, oat groats, pea protein, and flaxseed. Plus, there's plenty of veggies, like beets, potatoes, spinach, carrots and lettuce. It seems only natural that Halo would introduce a vegan dog food line since vegan Ellen DeGeneres is a co-owner.

When the box arrived at my office, my co-worked Hannah said, "Let's try it!" And why not? It's vegan, right? We each popped a morsel in our mouths. And, um, well, it's dog food. It wasn't bad, just not my choice of favorite snack. But my pups have different tastebuds, and it's designed for them anyway. So what did they think? I'll let them tell you in their own words. First, here's Datsun: 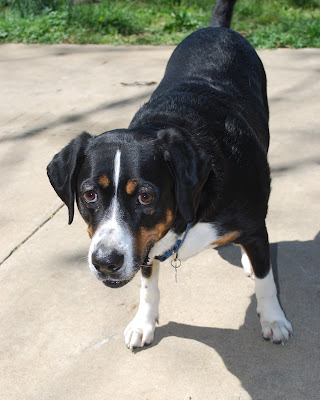 "Hey everybody! My name is Datsun, and I love to eat! I didn't used to be quite as interested in food, but now that I'm 10, I like to spend my days lounging on my special dog couch, awaiting my next meal. I like my usual food, but I also like to eat any cat food that falls in the floor when mom feeds the cats. Oh, and I like to stick my face in the cat food and eat while mom fills their bowls. Hell, I even like cat poop! But I've kicked that habit and would rather not talk about that."

So what did I like about the new Halo Vegan Garden Medley dog food? The taste! I gobbled this stuff up even faster than I do my usual food. Plus, it's loaded with antioxidants from fruit and vegetable sources."

And here's what Maynard had to say: 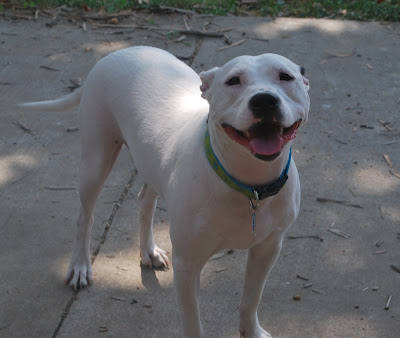 "Hey, hey hey!! Maynard here! I'm a rowdy, one-year-old pit bull mix, and I came from a broken home. But things are better around here. Before, I was tied to a tree outside in the heat and cold. But in my new home, mom lets me sleep on the recliner. And that's awesome! But I really don't sleep that much. I'd rather play and jump on people. It's rude, but I'm hyper, I just can't help myself."

"I usually hate meal times. The cats chase me away from their food bowls, and sometimes, they use their claws on my nose. I'm especially terrified of Gelfling, the little black cat. He's small, but he's pure evil. Anyway, I usually stand around my bowl and watch everyone else eat first. And then I nibble a little. And then I try to sneak some cat food. And then I make a lap around the kitchen, and then I might nibble some more. Datsun finishes his food really fast and then, since I'm not always manning my bowl, he tries to steal mine. But mom always tells him no, and then I reluctantly finish my bowl so no one can steal it from me."

"But when mom fed us Halo Vegan Garden Medley, I ate every bite as fast as I could. She fed us outside that day so she could take better pictures, so the cat food wasn't a distraction. But I doubt I would have noticed anyway! I ate mine almost as fast as Datsun, and he's a speed eater! It was delicious, and there's no artificial colors, flavors, or preservatives. Plus, no corn, wheat, or gluten. I don't even know what that means, but mom seems pretty happy about it."

So there you go! The boys loved it! If I ever get a raise, switching to Halo Vegan Garden Medley is first on the list. 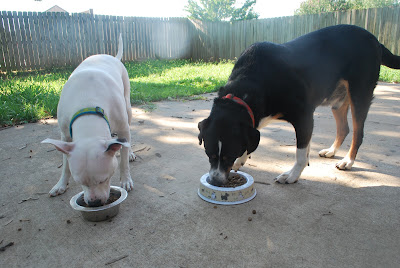 Bianca, where in Memphis can we find this vegan dog food? My new puppy is a wanna be vegan, she enjoys kale, lettuce, and carrots. I really do think she wants to be vegan like her human parents.

We just adopted a five year old dog from a broken home. She came with some food, but much prefers the vegan food we feed her. She would only eat her old non-veg food if we added large amounts of mooch. She is getting a thicker coat even with the heat. So far she is thriving. I've been searching for this Halo vegan food, but couldn't find it locally. I might just have but it online.

wow! this vegan dog food looks amazing! i would love to feed it to my little pup. any idea on how much it costs?

This looks great! I feed my dogs Honest Kitchen Preference. A 7 lb box is around $50 but it's dehydrated, you mix a small cup with water and it balloons up into kind of a veggie stew. My dogs love it!
http://www.thehonestkitchen.com/products/preference/

After this post your boss has to give you a raise! What boss could resist those adorable pups?

what cute dogs! you're so brave to try it! That's what I call doing your research:)

If only I was brave enough to try dog food... cool! I wish I could convince my parentals to feed our dogs vegan.

That's so awesome (and a truly entertaining read!). I don't have any dogs, but I really struggle with what to feed my cat. I work very hard to find a cat food that contains NO FISH, because fish are going extinct and we should not be hunting small wild fish from our oceans to feed inland animals like cats (and humans). I have to settle for one of the few brands that only has chicken and veggies, but this bothers me also, because I know that farm animals are ALSO fed fishmeal! Ummm, as you can see, I really think it's immoral to consume fish -- this is actually the main reason for my own vegan-eating.

I don't suppose your cats enjoyed eating this dog food at all? I wish I could feed my cat vegan, or at least vegetarian! When she passes away, I will never keep another carniverous animal in my home.

I was so excited about this post, I screamed. I wish I had a dog so I could feed him/her this. Just made my day!

I love that you tried it first.

I tried peanut butter buddy biscuits once - they were okay - needed salt :D

Ha! Loving that you tried it, too!

wow! looking good will try this out hope my doggy likes its...
thanks

we ordered a bag of dr pragers vegan dog food, our dog loves it but she'll also eat anything.
the owners at the pet store cautioned us against feeding our dog vegan but i thought dogs are omnivores like humans. have you fed your pooches vegan long term?

Please don't feed your dogs this. They are carnivores. Your dogs will artificially thrive but at the mitochondrial level you are wreaking chronic havoc. This is cruel. If you want to feed your pet vegan, get a rabbit. Of course, this comment won't get approved, so I'm wasting my time.

If you do not want your dog to eat meat, then you should choose a vegan dog food. It is healthy and it also gives the nutrition that your pet will need.

But dogs are carnivores. Foods we think sound great for us are not always appropriate for a dog. Dogs can't fully utilize a vegan diet and it's been shown plant matter causes undo strain on the pancreas. It's also been proven dogs can only utilize a small portion of a plant based diets. Studies have been done that show dogs have ZERO requirements for carbohydrates. It's a shame these pet food companies market unhealthy diets like this to the public. Here is a great website that explains further why dogs should not only receive zero plant matter but why a raw meat diet is the best thing you could feed your dog. http://www.thewholedog.org/artcarnivores.html This site lists references and you can easily research this further. I hope this helps.

Well, it is true that, nowadays, even pets are going vegan. Actually for dogs, it’s not bad at all. Unlike cats, dog are not pure carnivores. They can easily digest the majority of vegetables and grains. Did you know that Bramble, one of the oldest dogs in the world at 27 years old, is a vegan? He lives on a vegetarian diet of rice, lentils, and organic vegetables, and he gets lots of exercise.

These both dogs are looking dynamic and vigorous. I have also a pair of dogs. Their names are Jim and Louis. I never less careless about their food and just give them a high quality brand food.

Dogs are not carnivores, they are highly flexible omnivores.

Anyone will be able to find petfood industry 'studies' claiming the opposite, but it is a fact that domestic dogs have lived scavanging diets in and around humans for hundreds of years. Thousands of dogs live in India on vege diets (including the longest living dog according to the Guiness Book), and there are now long lived Western dogs living on planned vegan diets.

The important things are:
-Is the dog getting the nutrients it needs?
-Does the dog enjoy the food?
In most instances those questions will be answered in the affirmative for vegan diets much more so than for dogs eating awful commercial dog food.

I believe the BIBLE. It says in the beginning all humans and animals were vegan. I have found my dogs many times laying in the yard feasting on cucumbers and squash they had picked out of my garden. That is actually what first got me thinking about feeding them a vegan diet.They enjoy eating all sorts of raw veggies.