Memphis is only a short drive from New Orleans, so we like to get in on the Fat Tuesday fun here. And I'm such a nerd for holidays, so I was all over Mardi Gras yesterday! I started my morning with a 6-mile run, followed by this layered Mardi Gras-themed smoothie. I made three tiny smoothies, and I'd hoped they would layer better. But it turned out okay! The bottom was banana-kale-flax-hemp; the middle was mango-turmeric; and the top was blueberry banana. Each layer had a tablespoon of Complement protein as well. 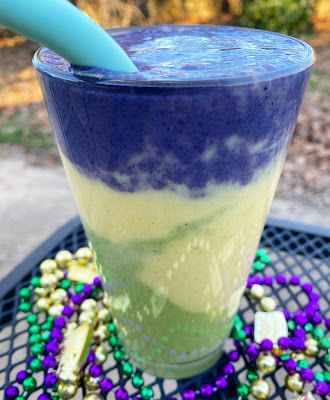 On Sunday night, I made my annual King Cake to enjoy on Tuesday (but I had some Monday too!). This year, I used Isa's king cake recipe from The Superfun Times Vegan Holiday Cookbook. It was stuffed with apples, cinnamon, and raisins, which is not traditional. But hey, she's from Brooklyn. It was tasty though! I brought a slice to my friend Susan, and the baby was in her piece. 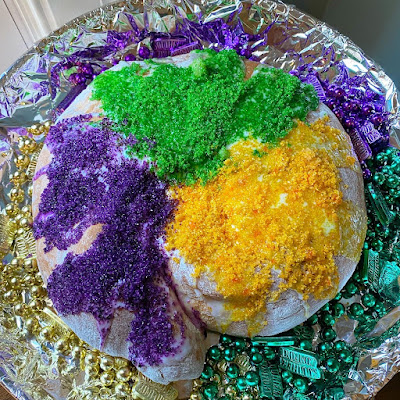 I also picked up some of French Truck Coffee's special Big Chief Mardi Gras Blend. French Truck is roasted in my own neighborhood! 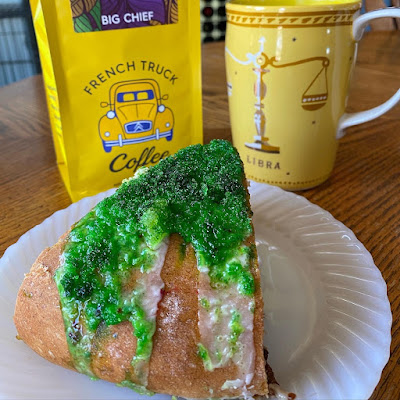 For dinner, I turned again to the The Superfun Times Vegan Holiday Cookbook. I made the Eggplant Po'boy, but rather than fry the breaded eggplant in oil, I air-fried the slices. They turned out perfectly! The sandwich has mayo, tomato, and a red cabbage-carrot slaw, and I used a locally baked Lulu's baguette. 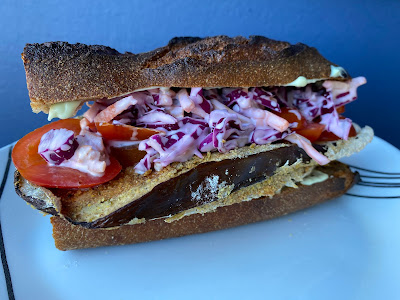 I had a work function in the evening (a coworker's going-away party), but before that, I stopped by Crosstown Brewing to pick up their limited Virtual Baby King Cake Stout. Each can has a QR code that you can scan to enter a contest for the virtual baby. The winner gets Crosstown Brewing merch and prizes. We won't know if we won until Friday, but fingers crossed! Also, this beer was fantastic — it really tasted like king cake! 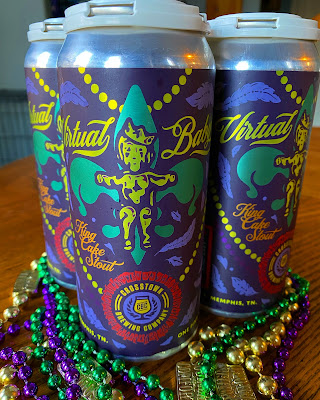 LOOK at all those wonderful colors! SO fun! I've been blogging 4 or 5 times a day lately...trying to keep my mind off of other things, I guess. OH! Random question...was it YOU I had a conversation a LONG time ago about Saltine Salad? Swing by my blog when you have a chance - I posted about that (and lots of other things LOL) but I'm wondering if it was YOU who I talked to about it 'being a thing' or not hahaha

I love that you made a layered smoothie! Your commitment to holidays always makes me smile.

I knew I could count on you to celebrate Fat Tuesday in style! I love that smoothie, it looks amazing. Actually everything looks amazing and that beer sounds crazy good. Glad you enjoyed the day!