It's soup season! As I've mentioned many times before, it's hard for me to get excited about fall, mostly because I'm not a cold weather person. But there is at least one good thing about cooler temps — SOUP! Truthfully, I eat soup year-round, but it does seem far more comforting when it's cold outside.

Julie Morris has come out with a new soup cookbook just in time for fall! It's called Superfood Soups, and it's filled with recipes containing health-promoting foods, like goji berries, hemp seeds, dulse flakes, and watercress. The hardcover book features beautiful, full-color pictures for most of the recipes. 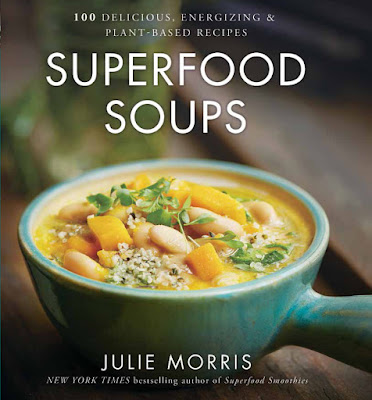 There's a helpful intro on the basics of creating a superfood soup with lists of bases (like grains and legumes), liquids (like stocks, nut milks, or even wine), and add-ins (think leafy greens, nuts, vinegars, etc.). And Julie lists the Superfood Seven: medicinal mushrooms, sea veggies, green veggies, super berries, super roots, super seeds, and super grains. She goes into detail about the health benefits of all the superfoods she uses in the book.

There's a chapter on rejuvenating broths, chilled soups (probably better for summer), smooth and creamy soups, brothy and noodle soups, chowders and porridges, stews and chilis, and soup accoutrements. After much deliberation, I finally settled on this Sweet Potato & Maca Soup with Green Harissa from the chapter on creamy soups. 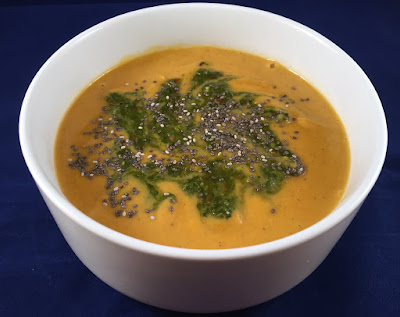 The superfoods in each recipe are clearly marked, and this one contained maca, chia seeds, and cilantro. It's topped with a green harissa made with fresh jalapenos, parsley, cilantro, lime, and olive oil. The harissa also contained optional wheatgrass powder, but I didn't have that on-hand and didn't want to shell out the cash to buy any.

I always have maca around though! I'm a huge maca fan, and I often add it to chocolate-y or nutty protein smoothies. It gives me a boost of energy, and it adds a deep, earthy flavor. That earthiness in this soup complemented the sweet potato and spices (cinnamon, chili powder, nutmeg, and coriander). The green harissa on top was loaded with fresh garlic, so it really boosted the soup's flavor and gave it some added heat.

I already had most of the ingredients to make this soup on hand, so there was no expensive purchasing of hard-to-find, exotic superfoods. In fact, most (not all) of the recipes in this book are made with superfoods that you'd find at any grocery store. However, there are some recipes that call for strange things that may be harder to find, like cordyceps powder or dried yacon.

Other recipes that I'd like to try this fall: Tomato-Goji Soup with Fresh Basil, Green Juice Soup with Cucumbers and Rice, Caraway Cabbage Soup with Freekah Balls, and most importantly, the Superfood Ramen Bowl! The ramen bowl is loaded with goodness, like goji berries, yacon, and black soybeans, and it's topped with kale chips!! I'd have made it for this review if I only knew where to score some yacon slices. Oh well! Maybe I can order some?

I have a feeling Superfood Soups will help get me through these dark, cold months ahead!
Posted by Bianca at 10:26 PM

I am so with you. I loathe cold weather. and it's super hard for me to love fall, because I know what comes next! But I also really do love soup.