My favorite podcast — Rise & Resist — is doing an October photo challenge on Instagram. Each day, there's a theme, and you post a photo that corresponds with that theme. Today was Seasonal Loves, so of course, I went with pumpkin. Because pumpkin is the ONE THING that makes fall bearable. Okay, also my birthday and Halloween and Thanksgiving and my veganaversary, too.

I wasn't planning to eat pumpkin today, but I needed a fresh picture for that post. So while I was on my run, I dreamed up an easy recipe for Pumpkin Spice Latte Protein Waffles with Cinnamon Apples using FitQuick Java Chip waffle mix. I quickly threw the recipe together as soon as I got home from my run. 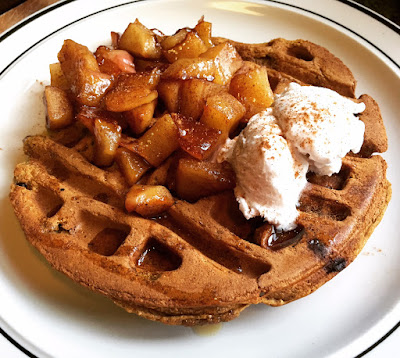 If you're not familiar with FitQuick, it's a prepared, gluten-free, vegan waffle mix with 22 grams of plant-based protein. The company is run by Holly Noll, one of the co-hosts of the Rise & Resist podcast. Shortly after I started listening, I ordered some FitQuick, and I pretty much became obsessed! I keep several flavors in my pantry at all times now.

This recipe would work well with the vanilla FitQuick flavor as well. But using the Java Chip takes it from pumpkin spice waffles to PSL waffles. You cannot go wrong with the PSL.

Preheat a waffle iron, and spray with non-stick cooking spray. In a medium bowl, combine the FitQuick mix with the plant milk, pumpkin puree, and spices. Set aside for two minutes.

For the apples, combine all ingredients in a small saucepan. Simmer over medium-low heat, covered, for 10 minutes, stirring occasionally. Lower heat if maple syrup starts to burn and caramelize.

While the apples are cooking, spread the FitQuick batter into the waffle iron. Cook for 8 to 10 minutes.

That looks really great. I haven't been able to get into fall this year, because winter!!