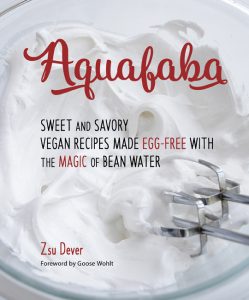 Isn't it amazing that something as simple as bean juice has revolutionized the vegan world? Just a couple short years ago, all of us vegans had sadly resigned ourselves to a lives without meringue or macarons. But thanks to the discovery of aquafaba, those sad days are behind us.

If you're not familiar, aquafaba is the cooking liquid from beans. When whipped in a stand mixer, it forms stiff peaks just like egg whites, and it can be used interchangeably for eggs in many recipes, including the aforementioned meringues and macarons. It's best for baking and can't really be used as sub for like scrambled eggs or boiled eggs, but tofu and Follow Your Heart Vegan Egg already provide great substitutes in that department.

Most commonly, vegans use chickpea liquid, but I hear many other bean liquids will work. I've only experimented with chickpea myself. And chickpea liquid is the preferred liquid of choice for Zsu Dever in her new cookbook Aquafaba.

I believe this is the first aquafaba cookbook on the market, and it's got all the basics. Stay tuned and I'll be giving away a copy at the end of this post! There are recipes for baked doughnuts, crepes, mayonnaise, yogurt, portabello schnitzel, challah, brioche, quiches, and frittatas. Plus, tons of dessert recipes (yes, macarons), including lemon meringue pie, homemade marshmallows, nougat, madeleines, soft-batch chocolate chip cookies, pound cake, and more.

I picked two recipes to try — one savory and one sweet. For the savory dish, I made the Sundried Tomato & Artichoke Quiche. I've made plenty of tofu quiches in my day, but this one was entirely tofu-less. Just blended cashews, aquafaba, sundried tomatoes, chopped artichokes, and spices. The filling was very light and airy and fluffy when I poured it into the pie pan (and I even had a little more filling than would fit), but it cooked down into a firm, eggy quiche. Perfect with a side salad. 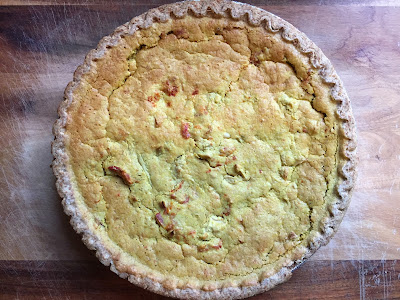 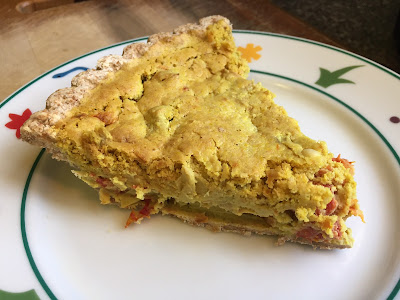 For my dessert, I couldn't resist the Chewy Fudge Brownies. I've often used silken tofu in vegan brownies, but in this recipe the aquafaba is really the only "liquid" ingredient. The batter started out fluffy like the quiche batter, but it cooked down into a soft, chewy, melt-in-your-mouth, fudgy brownie. I gave some to my non-vegan neighbor, Dennis, and he loved them. 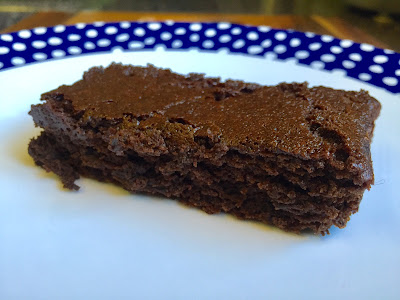 Zsu's publisher graciously offered to share the brownie recipe with my readers, so I've posted it below. And I'm giving away a copy of Aquafaba to one lucky reader (U.S. residents only at the publisher's request). To enter, just leave a comment about an eggy dish you'd like to recreate with aquafaba. I'll randomly select a winner on Sunday night! BE SURE AND LEAVE YOUR EMAIL ADDRESS. If there is no email address, I have no way to contact you if you win. Good luck!


CHEWY FUDGE BROWNIES
Rich, chocolatey, and chewy on the inside and lightly crisp outside, these brownies are sure to satisfy any chocolate craving. Make sure to use Dutch-process cocoa powder and bake the brownies just until a test toothpick is still holding onto a few crumbs. The aquafaba acts as an emulsifier and light leavener in this decadent dessert. (from Aquafaba, copyright © 2016 by Zsu Dever. Used by permission.)

1. Meringue: Prepare an 8- x 8-inch square pan with a sheet of parchment paper hanging over one set of opposite sides of the pan to form “handles” for removing the baked brownies later. Preheat the oven to 325°F. Add the aquafaba and cream of tartar to the bowl of a stand mixer. Using a whisk, whip the aquafaba for 10 seconds. Using a balloon whip attachment, whip the aquafaba on medium speed for 5 minutes. Increase the speed to medium-high and continue to whip for another 5 minutes, or until the aquafaba can hold firm peaks. Add the granulated sugar and brown sugar (add the granulated sugar first and then the brown sugar), 2 tablespoons at a time, over the course of 3 minutes and continue to whip for an additional 2 minutes, or until the sugar has dissolved and the meringue is climbing the side of the bowl.
2. Batter: Sift together the cocoa, flour, salt, and baking powder in a medium bowl. Add the cocoa mixture, sifting it again, right on top of the meringue. Add the oil, milk, and vanilla directly on top of the cocoa mixture and fold the mixture until a pourable batter forms without any obvious air bubbles.
3. Add the batter to the prepared pan and bake the brownies until a toothpick inserted into the middle comes out clean with only a few moist crumbs, about 30 to 50 minutes. Do not overbake (but note that glass baking dishes will need a longer baking time). Run a knife around the edges of the pan and, grasping the overhanging parchment paper, transfer the brownies to a cooling rack. Cool completely before serving.

Note: Although aquafaba is best if homemade using the recipe provided in the book, you can use aquafaba from canned chickpeas. Use the organic, low-sodium, canned chickpeas and strain off the liquid into a measuring cup using a fine mesh strainer. Note the amount of liquid you acquired, then add it to a medium saucepan and bring to a boil. Reduce to a simmer and cook until the liquid reduces by 1/3. Cool the aquafaba completely before using.

I'd like to make scrambled eggs! corrg14 @ gmail . com

Sweet noodle kugel. My mom used to make it with egg noodles, butter, and eggs and I've tried to recreate with vegan noodles and margarine and no eggs, but the consistency isn't there. Will try aquafaba!! Alaskarachel @ Gmail . Com

I would love a great vegan lemon meringue pie! yogadogwalker@hotmail.com

I would love to recreate a dutch baby. theslajcherts AT gmail.com

How choice! A great breakfast egg sandwich. katemcgrth at gmail.com

I would love to make a lemon meringue pie! Thanks for this giveaway! sophie_680 AT hotmail.com

I'm going to have to go with lemon meringue pie too. I miss that so much but refuse to eat the egg white disgusting stuff on a normal one. I'm looking forward to trying it with aquafaba!

Coconut Cream Meringue or Chocolate Meringue or Lemon Meringue!! All about the pies!!! Thanks! rachellinamarie@yahoo.com

I would love to try marshmallows! I've been intrigued by aquafaba since this book came out, but have yet to try making anything with it.
sarah0003@gmail.com

I would want to make my grandmother's classic Yorkshire pudding recipe! I've missed it for 15 years. mariahrgruner@gmail.com

I would try to make cranberry curd.

I would love to make lemon meringue pie as I've never have tried it, even as a non vegan. Ashleymeganoconnor@gmail.com

I would love to recreate my mom's artichoke heart frittata...yumza!

I'd love to make lemon merengue pie, cookies, or use it to coat & fry like with eggplant parm or for cauliflower soup. msdiazmsdiaz@yahoo.com

My kids keep asking for marshmallows. Also would like to try meringue pies - something I never made. prichuda7@gmail.com

I would love to try out a 7 minute frosting. I miss that stuff. It is like a marshmallow frosting that I use to love to put on gingerbread cake.

Thank you so, so much, Bianca, for reviewing Aquafaba and hosting the giveaway. I really appreciate all the time and effort that goes into doing these. Thank you!!