Last night, I shared pictures of the food I ate on my actual birthday, which was Sunday. But tonight, I've got pictures from my birthday party, which I hosted at my house on Saturday night. Since the Blood Moon was full this weekend, I thought it'd be a perfect time to get all witchy! So we had a Witches' Ball and Pumpkin Potluck. Everyone was supposed to dress like a witch and bring a vegan pumpkin dish. And for the most part, everyone did! There were lots of witches' hats and black clothing. And plenty of delicious pumpkin dishes — both savory and sweet. 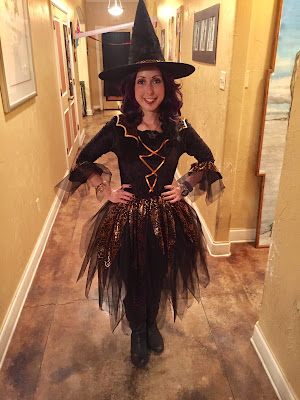 Here's a shot of the potluck table before a few more dishes were added. Every potluck has a couple of stragglers. 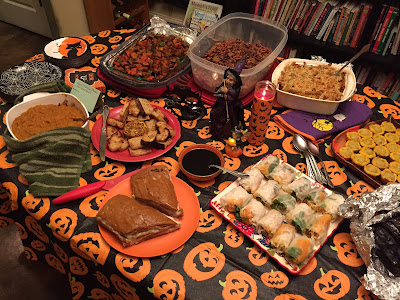 I made three dishes for the potluck. One was this Baked Penne Pasta with Pumpkin Cream Sauce form Julie Hasson's Vegan Casseroles. It has a creamy cashew-based sauce with canned pumpkin, garlic, and spices. It's topped with a buttery breadcrumb topping. 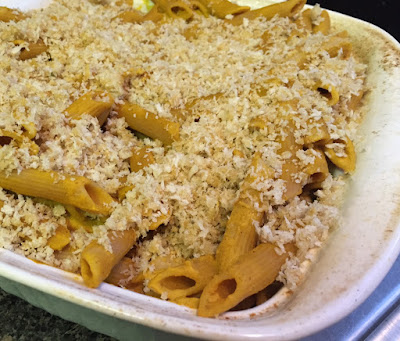 And I made these Butternut Squash Spring Rolls with Toasted Pumpkin Seeds from Veganomicon. These were really yummy and very different from other spring rolls I've had. You roast a squash and just add the cooked, cooled squash to the rolls, along with rice noodles, cilantro, and toasted pumpkin seeds. It was served with a soy-sesame dipping sauce. 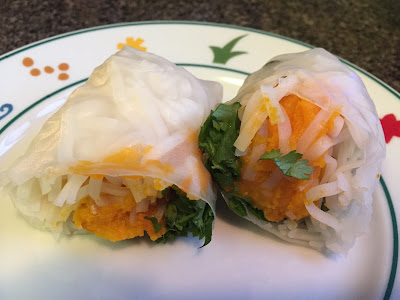 I also made these Chickpeas in Baskets from Fall Fomo No Mo. Super cute little vegan quiches made with a chickpea flour/black salt filling in pumpkin biscuit crust. 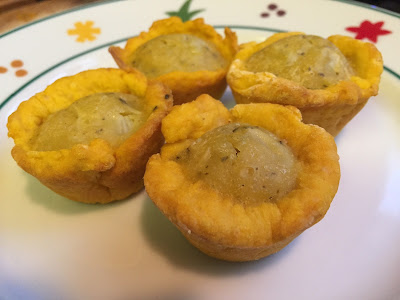 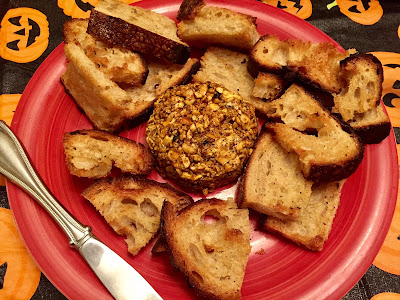 Nicole made this Pumpkin Potato Curry dish that had Indian spices, raisins, and peas. It reminded me of aloo gobi but with pumpkin instead of cauliflower. Lucky for me, she left all of the leftovers at my house! 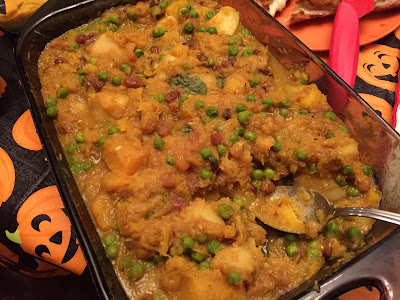 Diane also brought a pumpkin curry. Hers was a Spicy Thai Curry with Pumpkin over Mixed Grains. This had a great flavor and it was served atop a mix of brown and red rice and other grains. 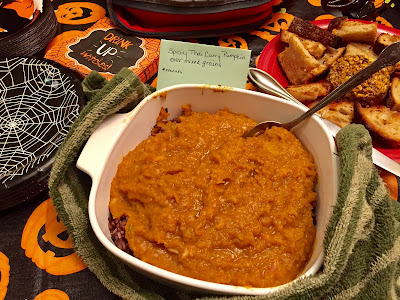 Shara made this amazing Roasted Cauliflower Pumpkin Swirl Dip from Happy Healthy Life. I adore cauliflower, and this was so good. She left me a bunch of it and the rest of the pita chips, so I've been eating it all weekend. 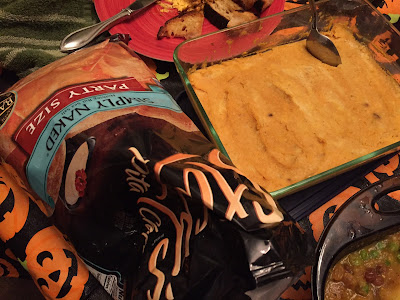 Mike always brings his homemade chex mix to parties, and it's typically spicy. But for this party, he made Pumpkin Spice Chex Mix, which was lightly sweet with hints of cinnamon and nutmeg. 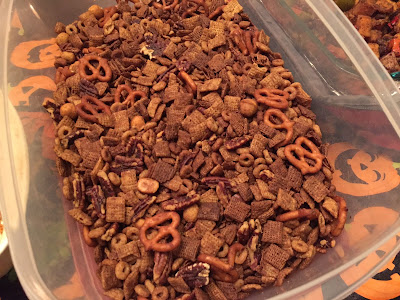 I somehow accidentally deleted the close-up shot of Melissa and Anthony's Sweet Potato Bake, but it was beautiful. Spice-coated orange sweet potatoes roasted with red and green bell peppers. And I failed to photograph Misti's Peanut Butter Pumpkin Dip with Apple Slices, but it was great. I have a little leftover for breakfast this week!

Pam made this sweet Pumpkin Cream Cheese Roll. It kind of fell apart as she rolled it, but it still tasted amazing. I think this was one of my favorite things of the night! The bread was so soft, and it was only slightly sweet. 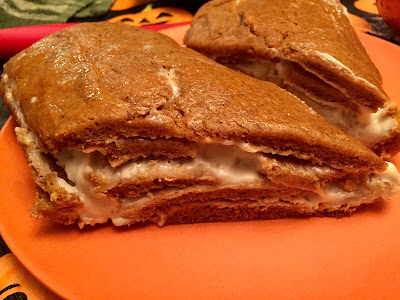 Shay made Pumpkin Chocolate Chunk Bread. Perfection! This moist loaf was flecked with bits of chocolate. I couldn't have eaten this whole thing. Sad there were no leftovers. 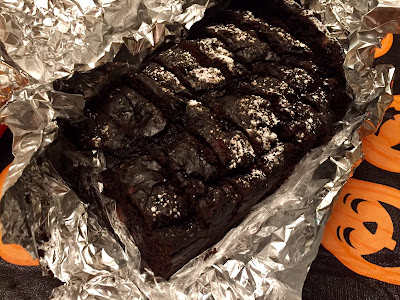 The highlight of the night, though, was my birthday cake baked by my friend Stephanie, aka Poopie Bitch from the PPK (RIP, PPK ... sadness). I had asked her to make her pumpkin insanity bars, so that's what I was expecting. And I was thrilled and surprised when she showed up with this cake! 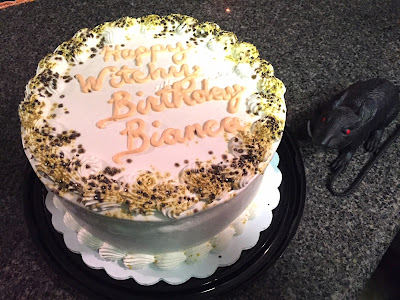 I was even more excited when we cut into the cake! She made me a vegan ice cream cake, y'all!!! I haven't had ice cream cake since I was a little kid, and I love it so much. This was a pumpkin cake with Ben & Jerry's Coffee Caramel Fudge almond milk ice cream and a vegan whipped topping. I am SO GLAD I have two slices left of this in my freezer. 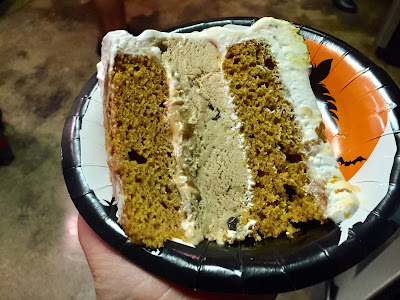 Such a fun party! I also made a Witches' Brew Cocktail with vodka, OJ, and pom-blueberry juice, but I failed to take pictures of that. And I got lots of amazing gifts. Here's my gift spread from the party! Mandala coloring books, a vintage Oreo cookie jar, crazy pink sunglasses, a cat finger puppet, a handmade Arkansas painting, a sodalite pendulum, a cat/waning moon necklace, a bunch of Soy Curls (Jennifer got me six bags!), a Contigo Purity Glass water bottle, a six-pack of assorted high-gravity craft beers, a bottle of wine, a birthday wine glass, a unicorn doll, an evil unicorn horn (it's covered in fake blood!), and some Hello Kitty toys. 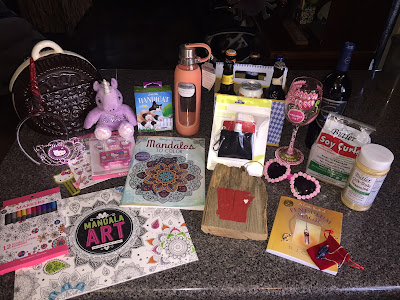 What a fun night! That sounds like the perfect way to celebrate your special day. Happy birthday!

Looks like so much fun!
All the food looks amazing, but I am definitely into that pumpkin cashew cheese.

All that beautiful food has me drooling! That birthday cake sounds absolutely amazing. I haven't had ice cream cake ever as a vegan, and that one looks and sounds AMAZING! I'm so glad you had such a fun night! Happy Birthday!

What a fun birthday party! I love the pumpkin theme and that cake, wowza!

Happy Birthday! I turned 31 on the 1st. I love birthday parties. And all the vegan food. I just had vegan pizza and cake! Your potluck looked amazing!

What fantastic friends to bring such excellent food. And great presents too, I love the oreo cookie jar! Happy belted birthday.

Happy birthday! It looks like it was a perfect party with so much amazing food. Also, who has a Witches' Ball?? That's amazing.

Haha there is something funny about my train of thought going "OMG! not THE POOPIE BITCH!" Been following her instagram account and had no idea where she was even located.

Are you sure your theme was witchy party not pumpkin party? Your bodies sure got enough vitamin A for the day ^__~