I shared a bunch of random meal pics yesterday. But I have more!!

As always, I've been eating at Imagine Vegan Cafe often. I'm so predictable! But at least I rarely order the same thing. It's been ages since I've had the Vegan Chicken Wrap, so I ordered that last Sunday at brunch. Vegan chicken, black beans, spinach, roasted red peppers, and garlic sauce in a wrap. 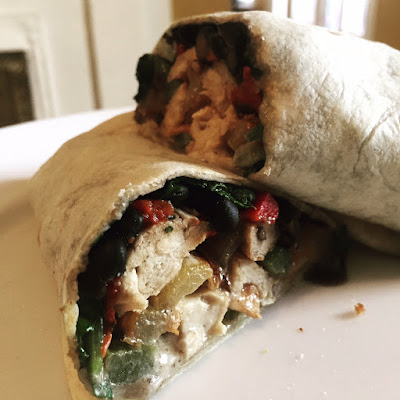 One of the few meals there I do order over and over is the Vegan Philly Cheesesteak. I love this sandwich so much! Sauteed vegan deli slices with housemade cheese sauce and grilled peppers and onions. Garlic kale on the side for good measure. 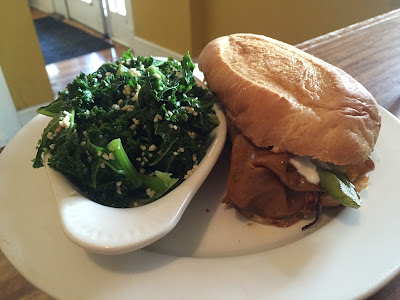 I've been eating lots of plant meat lately. All the protein!! My dad picked me up a Field Roast Celebration Roast a few months back, and I hoarded it in my deep freezer waiting for the right time to break it out. Last week, I was craving a good home-cooked "meat and two"-style meal, so I baked the Field Roast and served it with some Earth Balance White Cheddar Mac & Peas and Roasted Purple Potatoes. I added lots of ketchup to this plate after photographing. 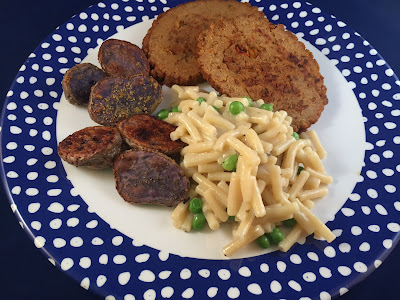 I started my job as communications coordinator for Crosstown Arts last week! On the last Wednesday of each month (which was last Wednesday), they have a catered staff meeting. Almost all of it was vegan!! They had Bianca Banh Mi Sliders (vegan tofu banh mis), Greek Hummus Pizza, and Salad with Wasabi Vinaigrette from Midtown Crossing Grill. And yes, those banh mis are named after me! Midtown Crossing is a neighborhood pizza joint just a block from my house and my new office, and when the owner Octavia added more vegan options, she named the sandwich after me. 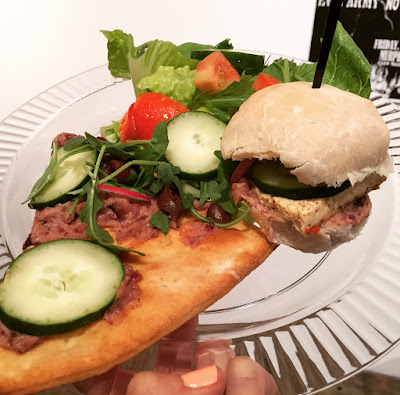 On Saturday morning, I was feeling like I might be coming down with something, so I skipped my 16-mile long training run in favor of rest and Amy's No Chicken Noodle Soup. Plus lots of echinacea tea, Airborne tabs (the zesty orange flavor is vegan), raw garlic, and raw apple cider vinegar shots. I woke up Sunday feeling fine, so I think I fought off whatever was trying to start. Long runs can actually weaken the immune system, so it's best to rest (or run shorter) when you're not feeling 100%. Also, I believe Bragg's apple cider vinegar works miracles. 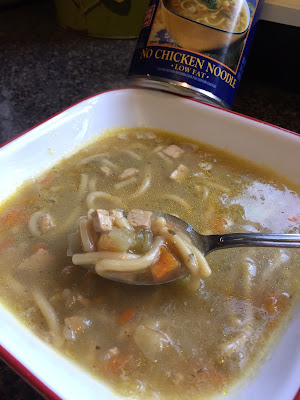 On Sunday, I went to Jonesboro to visit my parents. My mom and I stopped by the Truck Patch, their health food store, to stock up on groceries I can't buy in Memphis. While we were there, we hit up the salad bar for dinner. The Truck Patch has an amazing salad bar with the best seasoned tofu! Salads are $7.99 a pound though, so it's easy to spend too much. My salad was $11! Oops. It was delicious though. Enjoyed every bite. 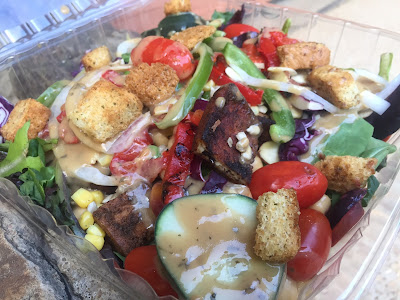 You always have delicious eats! I hope you're feeling 100% better today.

I love that Amy's no chicken noodle soups! It's one of the only pre made soups I buy.
Salad bars always add up so fast, but I always feel like they taste better than when I make them at home. Your salad looks well worth it!

I LOL'd about the ketchup, we're so the same sometimes!

That plate of field roast, mac & cheese, and potatoes looks so perfect! I need to make something like that when I'm back in the UK.

Field roast, mac and cheese, potatoes... what a plate of perfection!
Glad you are feeling better! Hope whatever it was stays away!

Do you put the raw garlic in the apple cider vinegar shots? I have done the shots before but I am not sure how to incorporate raw garlic yet! Thanks for the post!

Morgan, just now seeing your comment! But no, I actually take the garlic separately. I mince it and put it in a large spoonful of water and kind of toss it into the back of my throat. For the ACV shots, I use 1 Tbsp ACV, a tiny squirt of stevia (to make it taste better), and fill a shotglass the rest of the way up with water.