It's time for another random meal round-up! Here are a few things that have been on my plate lately.

I was inspired by Susan's blog, Kittens Gone Lentil, to make Vegan Fairy Bread! I'd never heard of this Australian treat until I read about it on her blog a few months ago, and I've been thinking about it ever since. The fact that "fairy" is in the name probably has a lot to do with my obsession over making this because how cute is that? It's white bread with butter and sprinkles. That's it! I used organic white bread from Whole Foods and topped it with Miyoko's Cultured VeganButter and Let's Do Organic vegan sprinkles. In Australia, "sprinkles" are called "hundreds and thousands"! I seriously cannot get over all the cute food names from Australia. 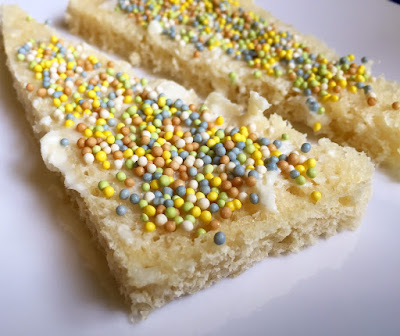 Friday night was my friend Pam's birthday, so we had dinner at Mosa Asian Bistro. I went with the Rainbow Panang Curry with Tofu because I had serious food envy when I saw someone order it on my last visit. I'm glad I went with that this time! Crispy fried tofu coated in coconut curry with lemongrass and lime leaf. Yes please. 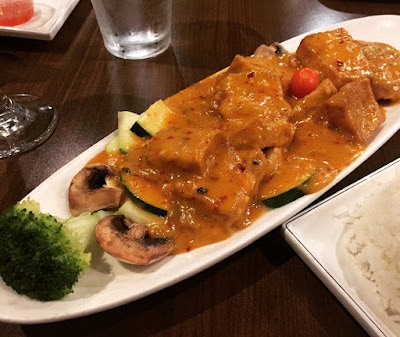 A couple Friday nights ago, my mom and I had dinner at Papito's — a Mexican joint in my hometown. I got the Veggie Burrito (minus the cheese sauce). It was actually probably the healthiest meal I've ever had at a Mexican place. Just seasoned, steamed veggies in a burrito. I topped it with guacamole after taking this pic. 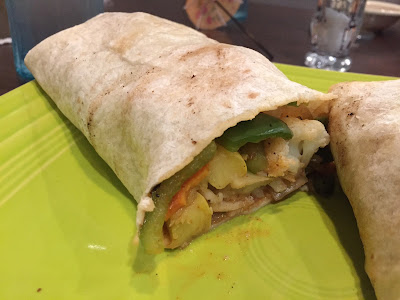 The burrito was massive! So I took half home. The next day, I reheated it and served it topped with crumbled Treeline chipotle cashew cheese and Yellowbird serrano sauce. On the side was salsa and some homemade refried beans that I had in my freezer. 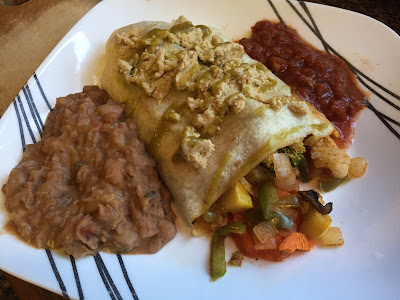 Y'all are probably tired of seeing ramen bowls in these Stuff I Ate posts, but I seriously eat a ton of ramen. Ramen is life. This bowl has rice noodles, peas, carrots, and tofu. And lots of black pepper. 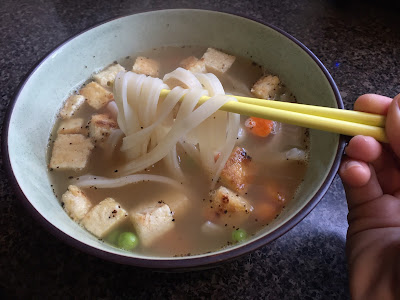 Gay pride was last Saturday in Memphis! Most cities do their pride events in June, which is national pride month. But in Memphis, we do ours in the fall because it's so hot in June. Used to be in October (around National Coming Out Day), but for some reason, it's in late September now. It was still very hot out, so I got a Watermelon Lemongrass Popsicle from the MemPops food truck. I'm addicted to their homemade, all-natural popsicles. 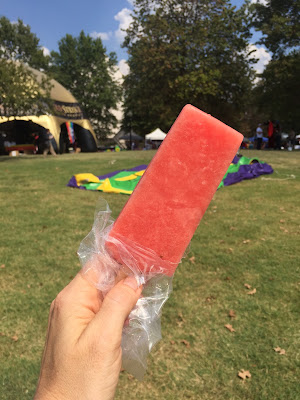 My friend Misti had a birthday last weekend, but she couldn't get a sitter for her kids. So we threw her a surprise party at Chuck E. Cheese! It was a good place for the kids to play and us to drink beers. Vegan options are slim there, but I found enough stuff on the salad bar to make a decent meal. 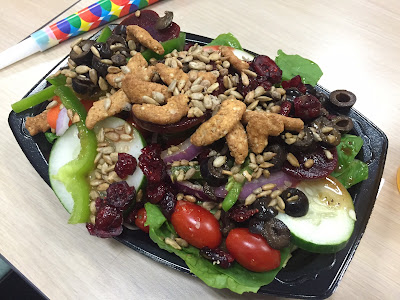 I'll be back with more random food pics tomorrow!
Posted by Bianca at 6:29 PM

I am so glad you made fairy bread! Did you like it? I feel like making some right now. Mmmmm....... Yum.

The rainbow panang curry sounds wonderful! Also the ice block. There is a company that sells watermelon and lime ice blocks here that I love during summer.

I almost drooled at the sight of the panang curry dish! The fairy bread looks so cute and perfect for parties. I never get sick of ramen pictures, they actually give me inspiration!

That Rainbow Panang Curry with Tofu does look amazing! And I love ramen, I don't eat it enough. So I can never get tired of those photos. ^__~