Avocado oil is fairly new to me. I'd never even heard of it until JL Fields started talking about using it on her blog, JL Goes Vegan, a couple years ago. I commented there that it sounded fascinating, and JL mailed me a bottle to try. She's basically the best! I quickly used up that bottle, and I haven't purchased any more, simply because it's still a little hard to find around here.

But CalPure shipped me a bottle of their Extra Virgin Avocado Oil to review, and now I'm all about the avo oil! 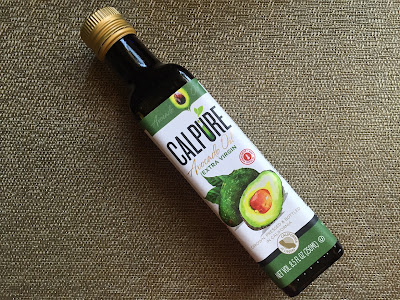 Avocado oil has a high smoke point, which makes it much more versatile than olive oil. The smoke point is the point at which the structure of the oil begins to break down, causing nutrient loss and the formation of dangerous compounds that can lead to free radical damage in our bodies. But since avo oil has a higher smoke point, it's safer for pan-frying or sauteeing, though I'd still avoid deep-frying with it.

Some avo oils have a neutral flavor, but this CalPure oil actually tastes just like avocados (similar to how unrefined coconut oil tastes like coconuts). It has a dark green color, just like the skin of an avocado. 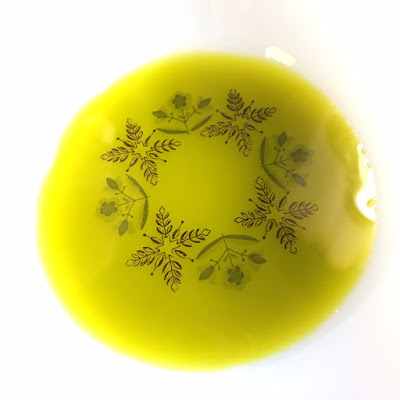 I used some CalPure oil recently to make the simplest ever Roasted Purple Potatoes. The result was crispy oven-baked taters with a light hint of avocado flavor. 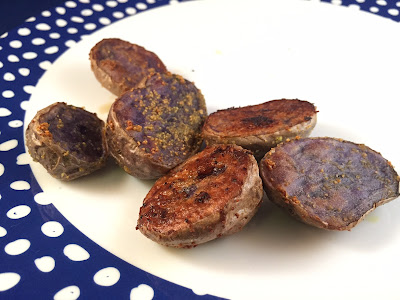 They're so simple that I feel silly even writing down a formal recipe, so here's an abbreviated version: Quarter 12 or so small purple potatoes (or any color of small potatoes). Toss them with 1 tbsp. avocado oil, 1 tsp. garlic powder, 1 tsp. sea salt, and 1 tsp. onion powder. Bake on a cookie sheet in a 400 degree oven for about 30 minutes or until potatoes are tender and outsides are golden. Enjoy!! With lots of ketchup!
Posted by Bianca at 10:20 PM

I've seen avocado oil, but never used it. I like roasting my potatoes with a little coconut oil. I like the thought of the oil having a slight avocado taste, could be really good for sauces and dressings too!

I just ordered a bottle :)

I remember scoring a bottle of avocado oil once because my boss got it free from his vitamin supplier. He was like "I'm never going to use this crap, you want it?" and I was all like "WTF IS WRONG WITH YOU!" Okay I might of been a little more polite about it. XD