Last week, I blogged about Robata, a new-ish ramen shop in Overton Square. It's vegan-friendly, and they have a full bar. So you know what that means? Vegan Drinks!

We had our monthly Vegan Drinks meetup at Robata tonight! Here's the gang! 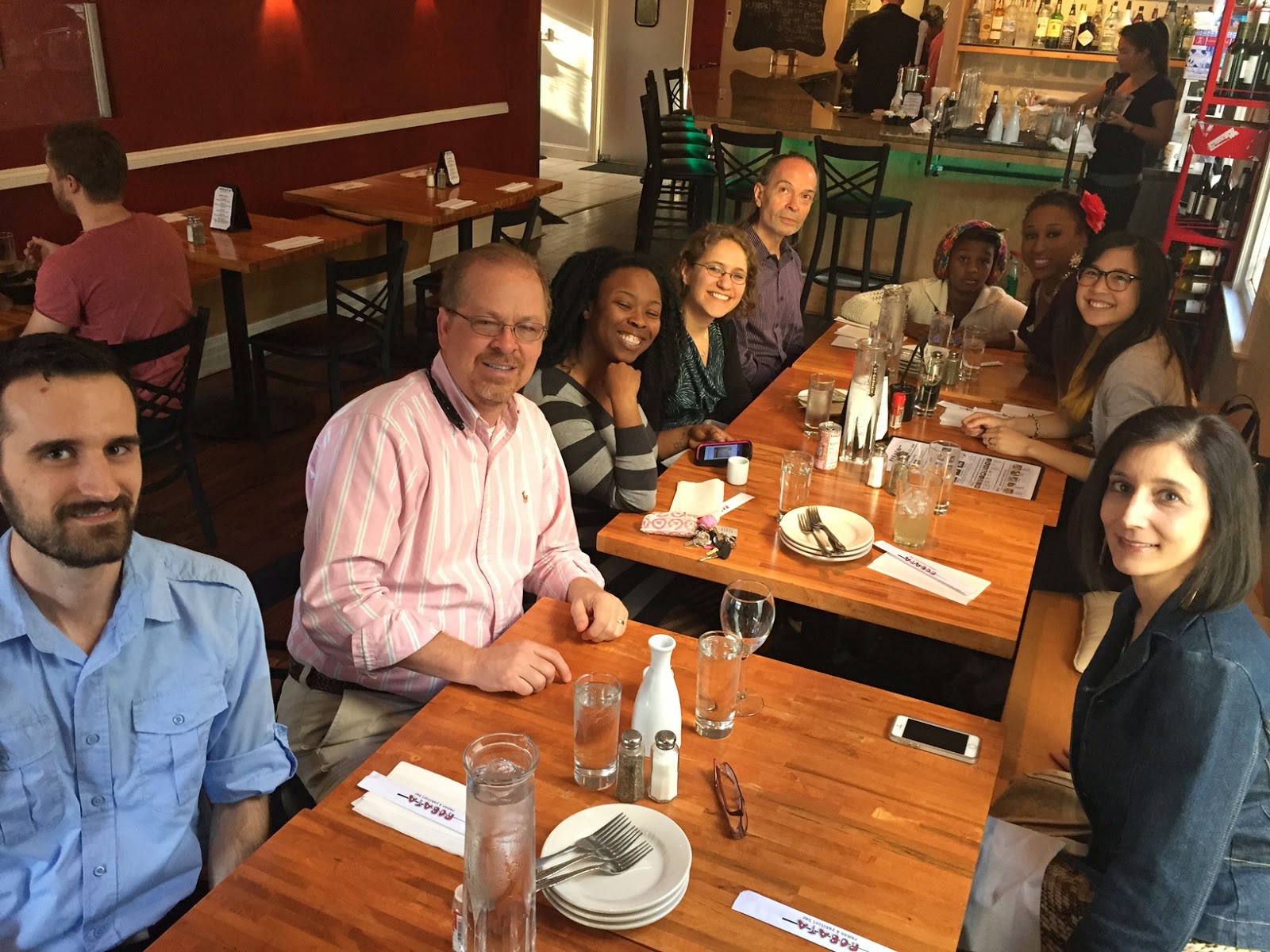 I ordered an Izakaya Lemonade to start. This is made with citrus vodka, triple sec, sour mix, and matcha green tea powder. It was a little sweeter than what I'd typically drink. But it was strong, so that made it okay. 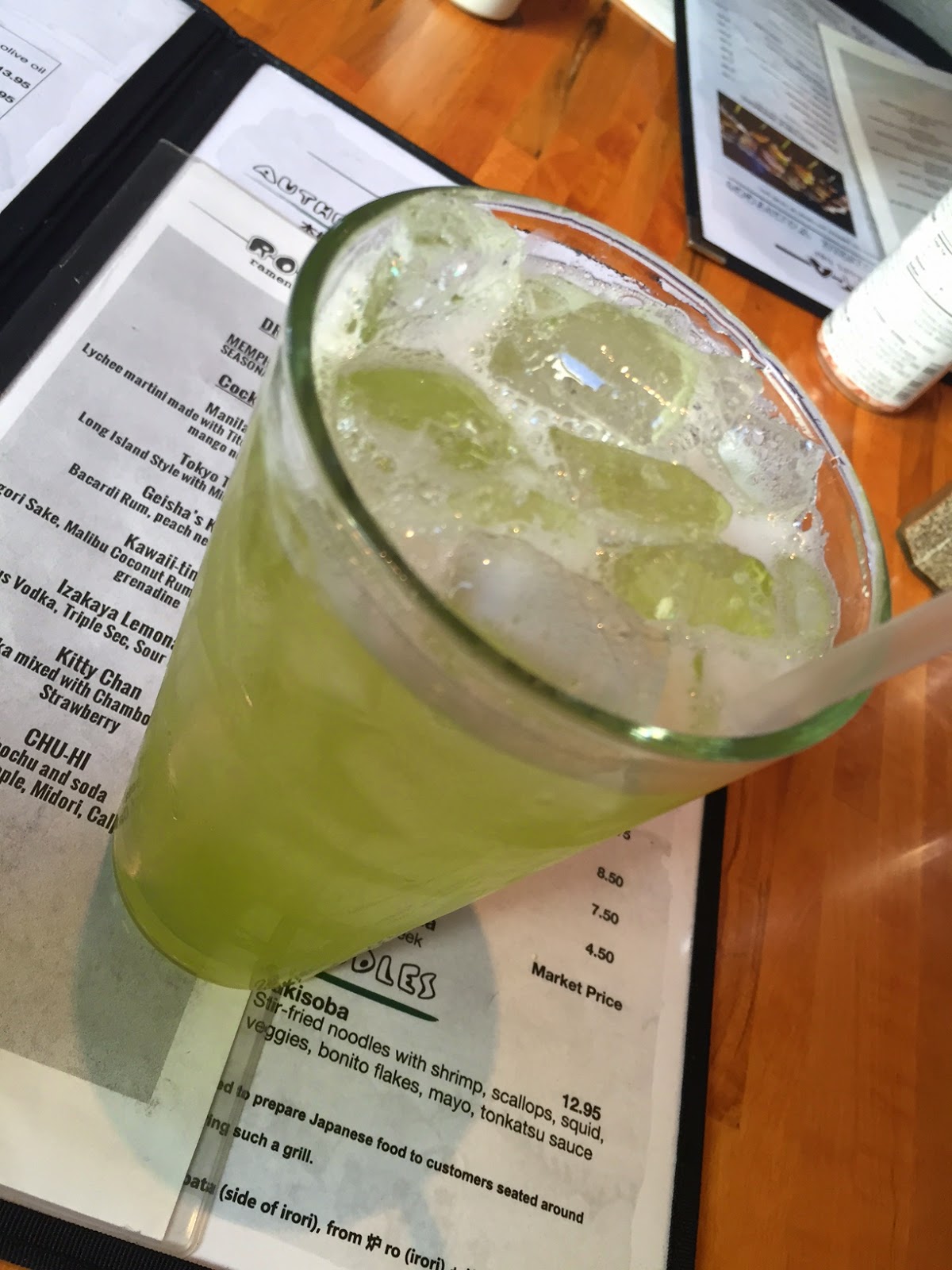 Cassi went all high-dollar and ordered some imported sake with vegan jello bits inside. It's something she had when she visited Japan, so she just had to have it even though it was an $11 drink! 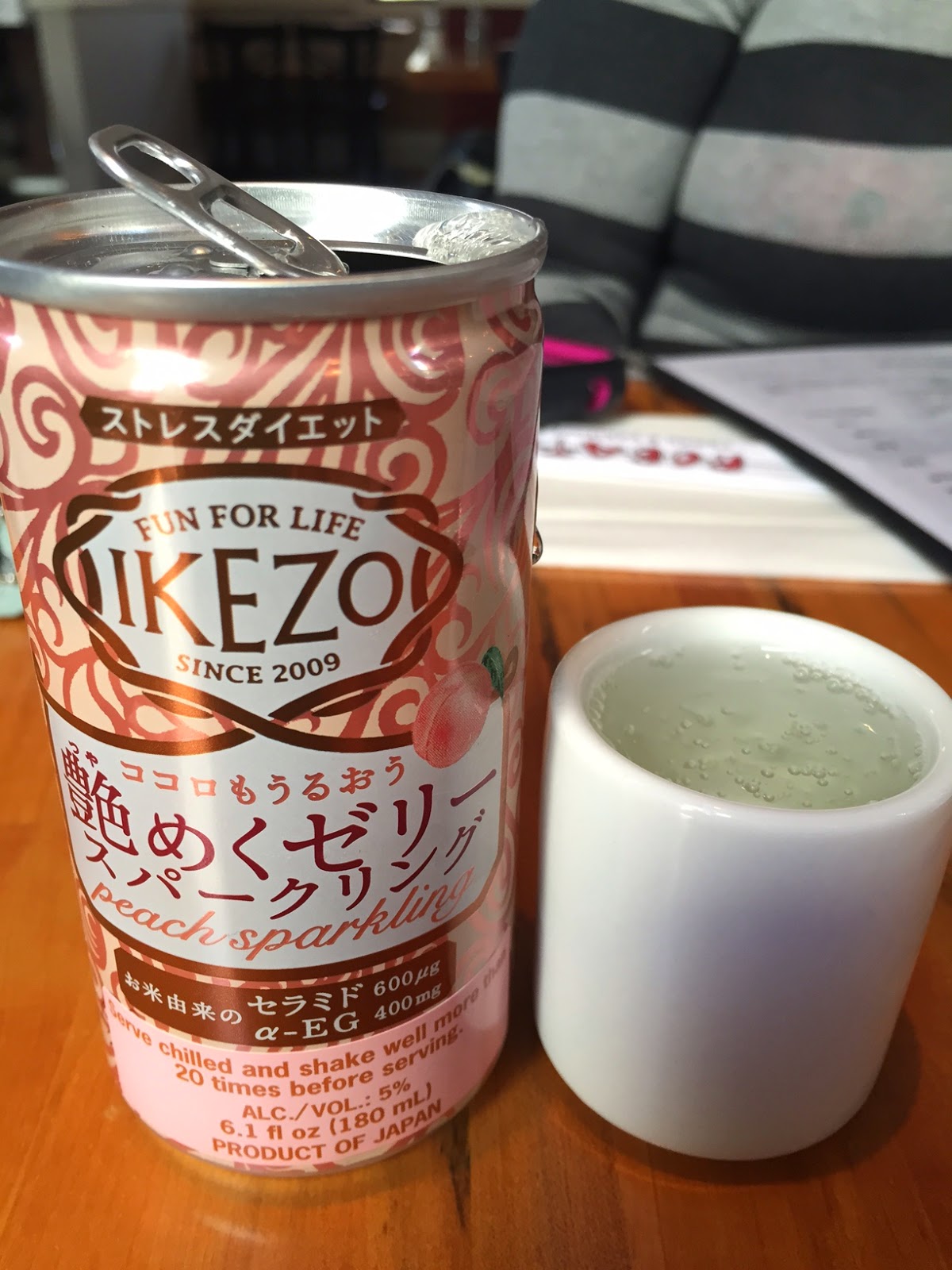 We didn't realize until after we ordered that hot sake was half-price for happy hour. So we split an order of that after we finished our first round. 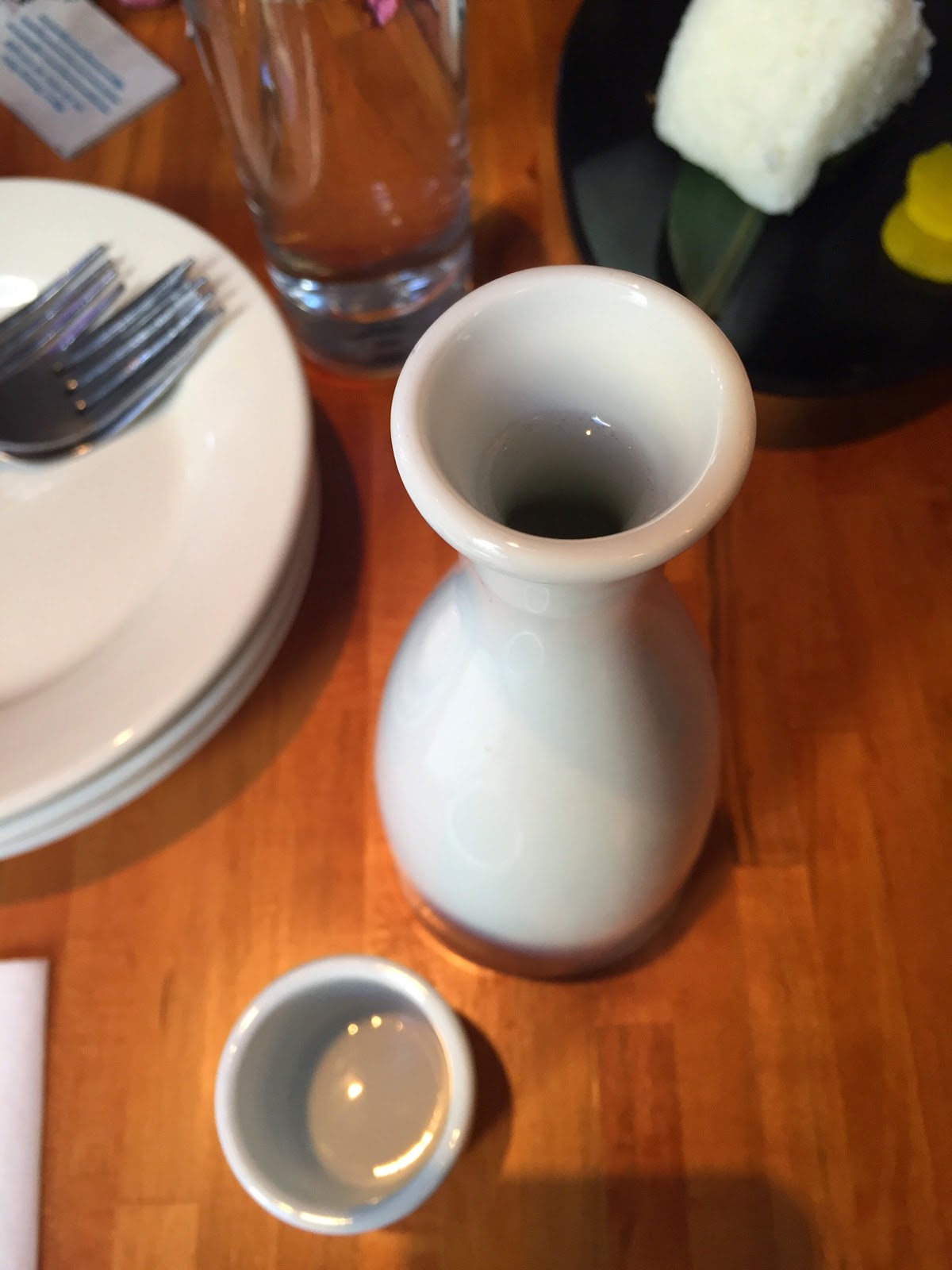 To start, I got the Plum Onigiri — steamed rice ball with umeboshi plum. The plum is on top and stuffed in the center. And those are little pickles on the side. 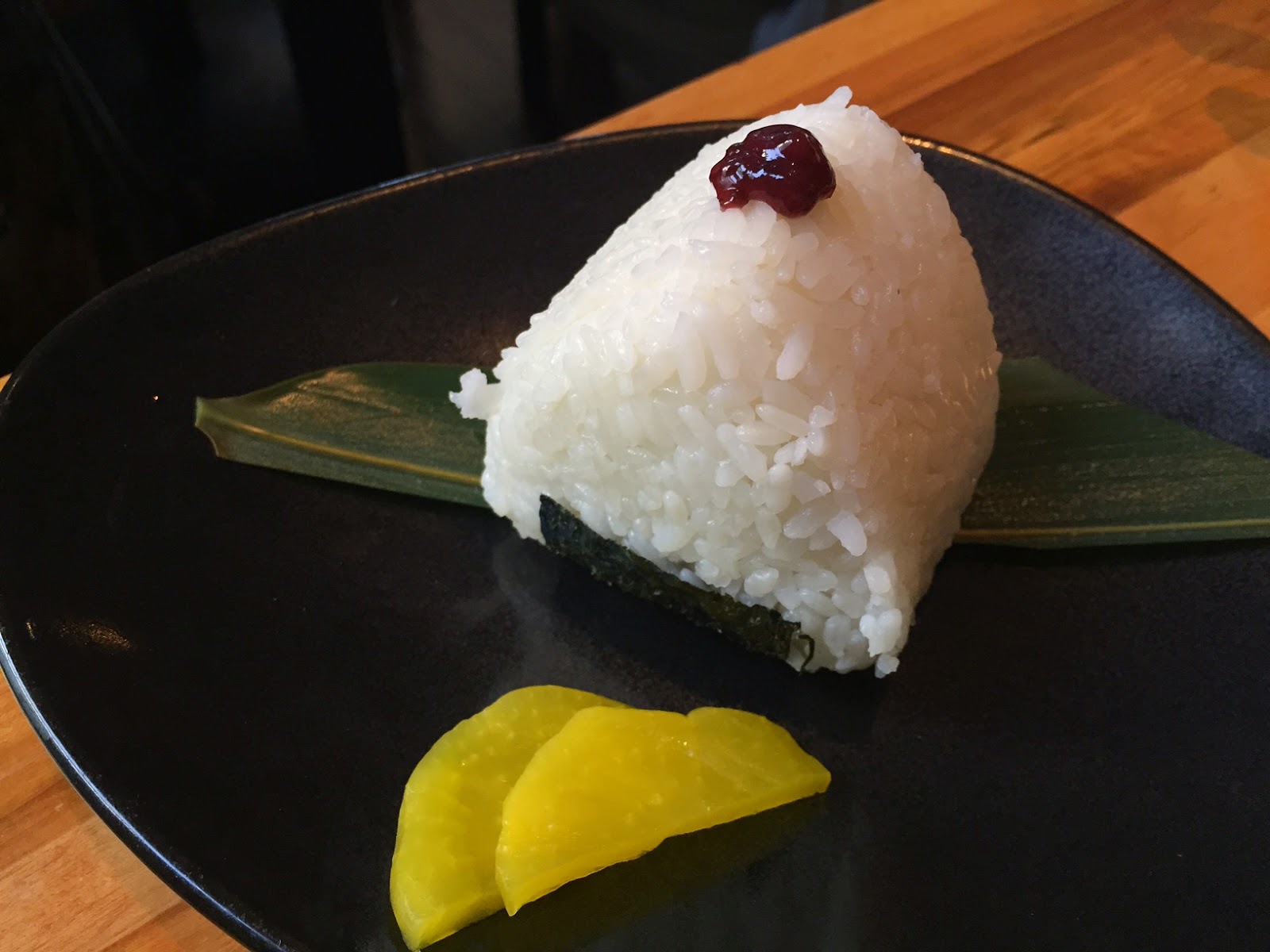 And Garlic Yakitori because garlic! 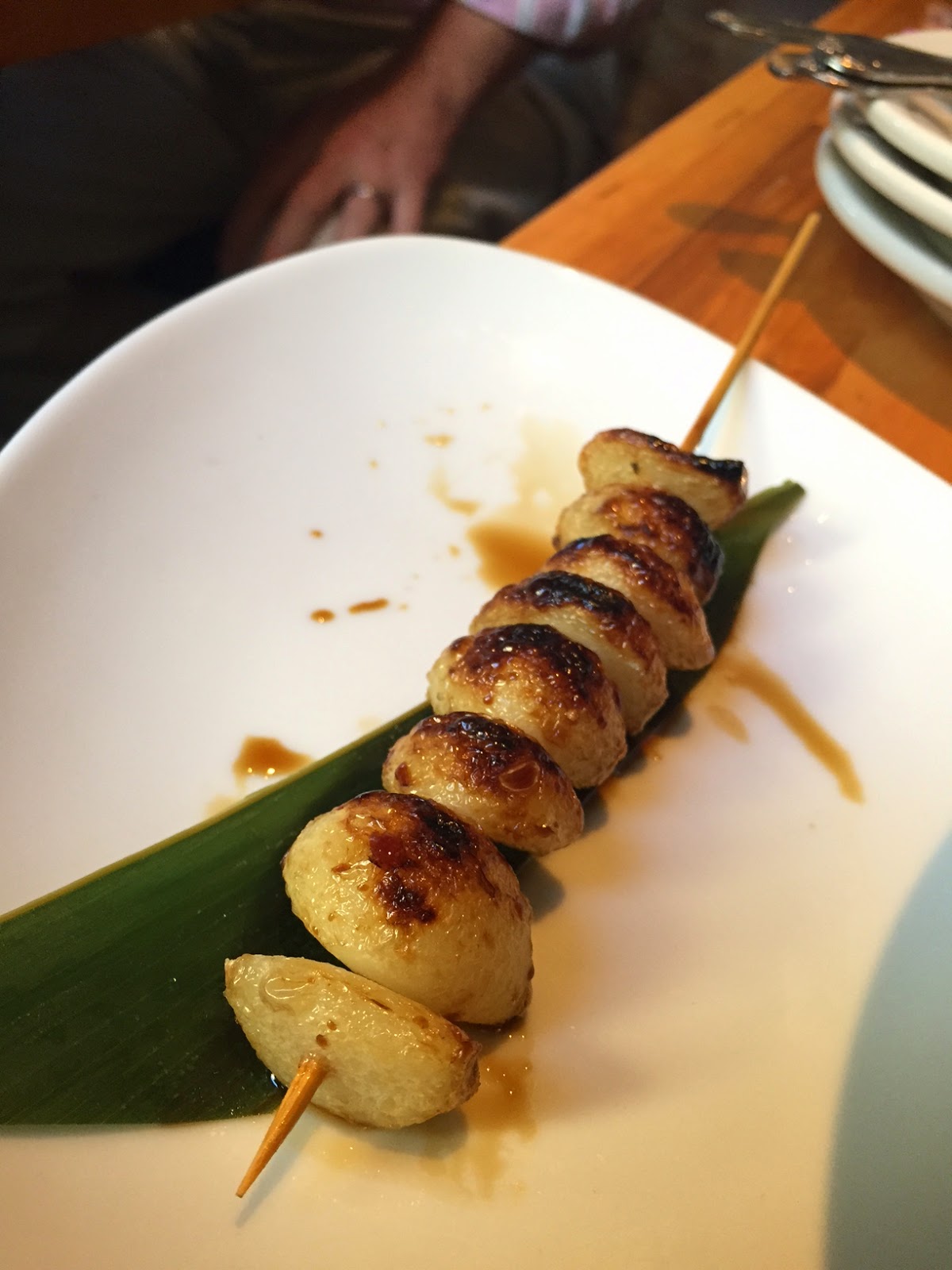 My entree came with a side of Vegetable Gyoza. Yum! 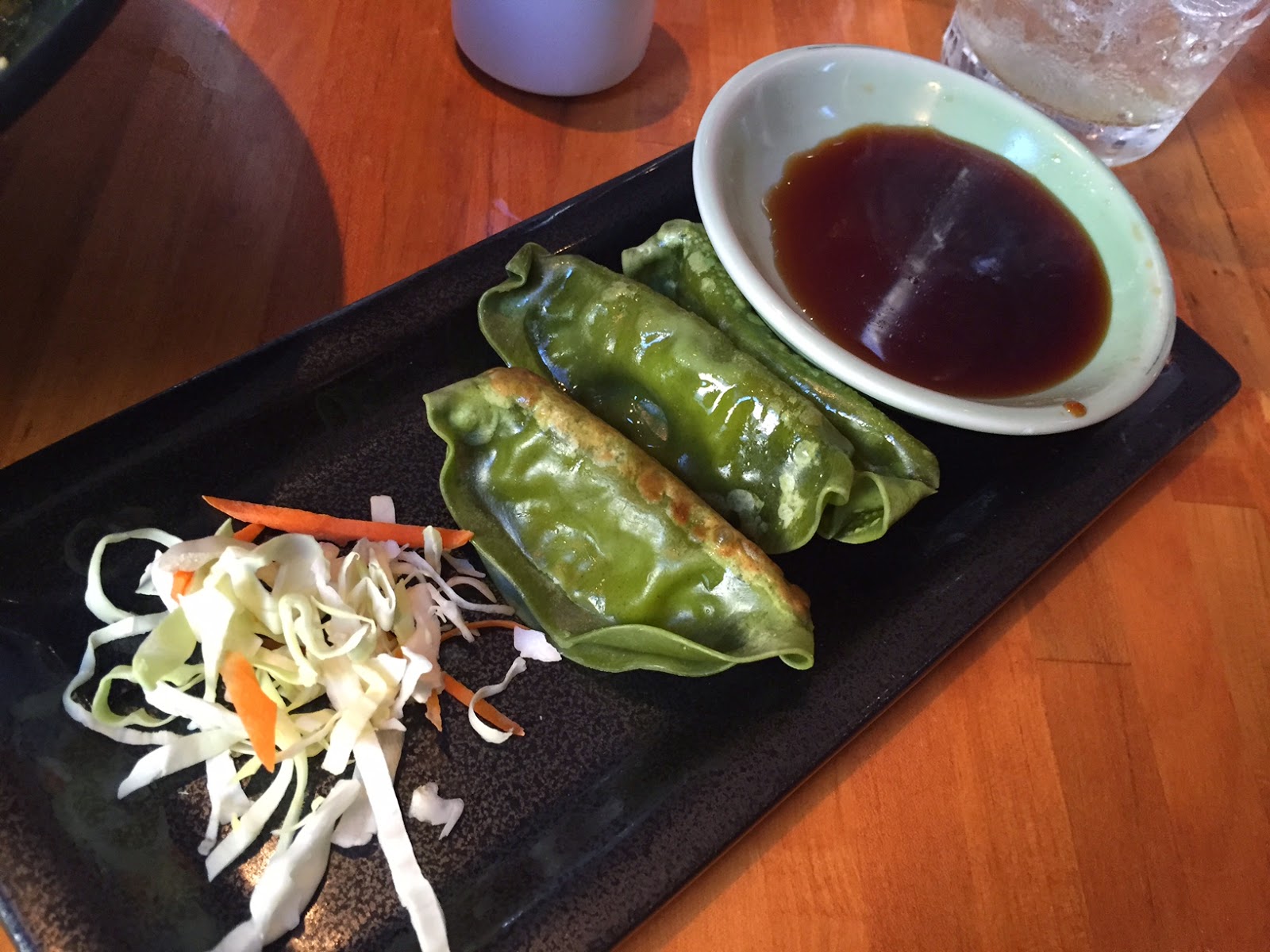 For dinner, I ordered the Yasai Ramen, a vegan rice noodle soup with seaweed/soy broth, corn, lettuce, and veggies. But honestly, by the time I got to this, I'd eaten (and drank) all the above, and I was so full that I took two or three bites and took the rest home for tomorrow's lunch. 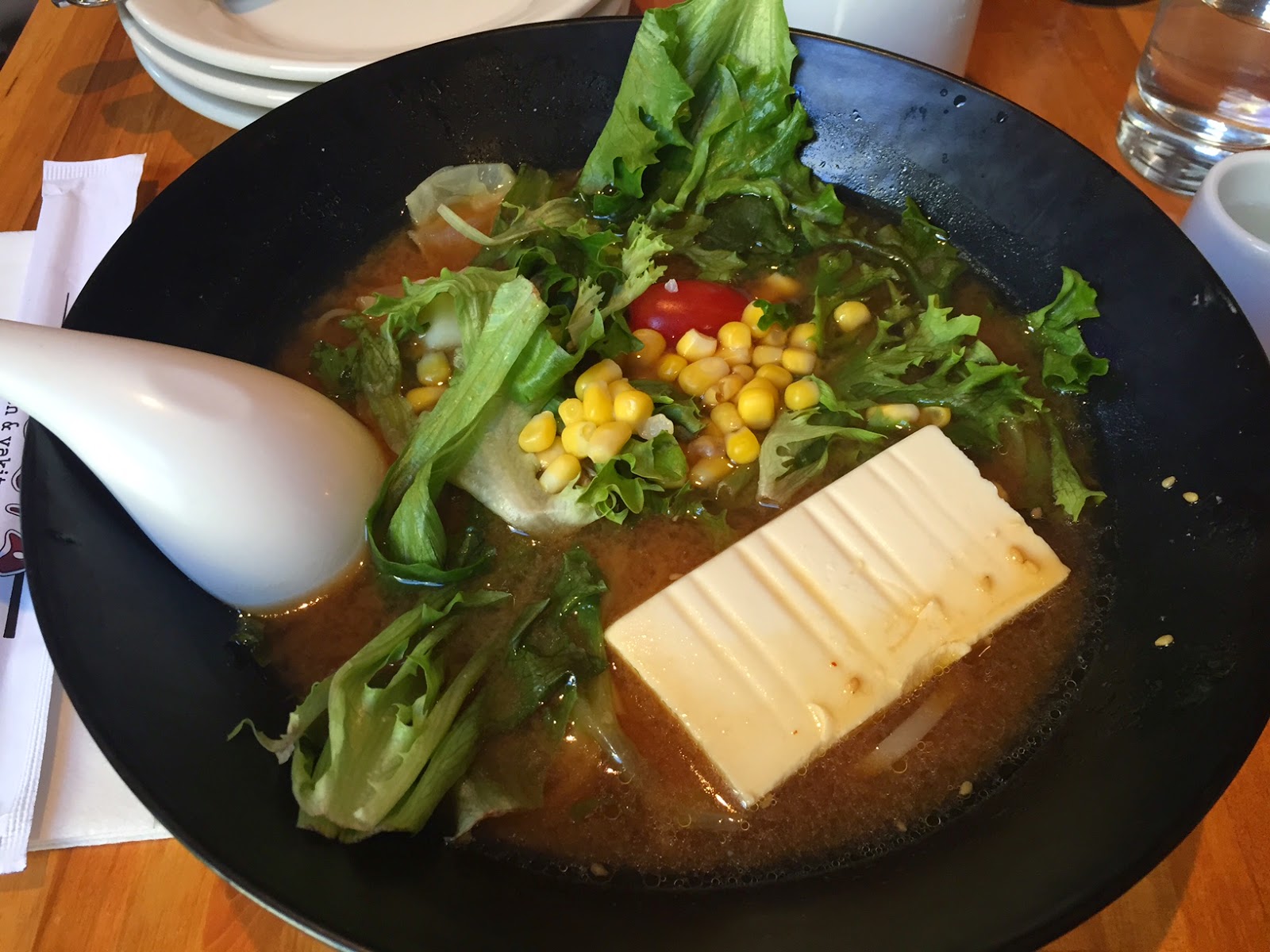 Most everyone else got some variation on these same items. But Karen got the Shishito Yakitori — Japanese peppers. She said it tasted like okra! 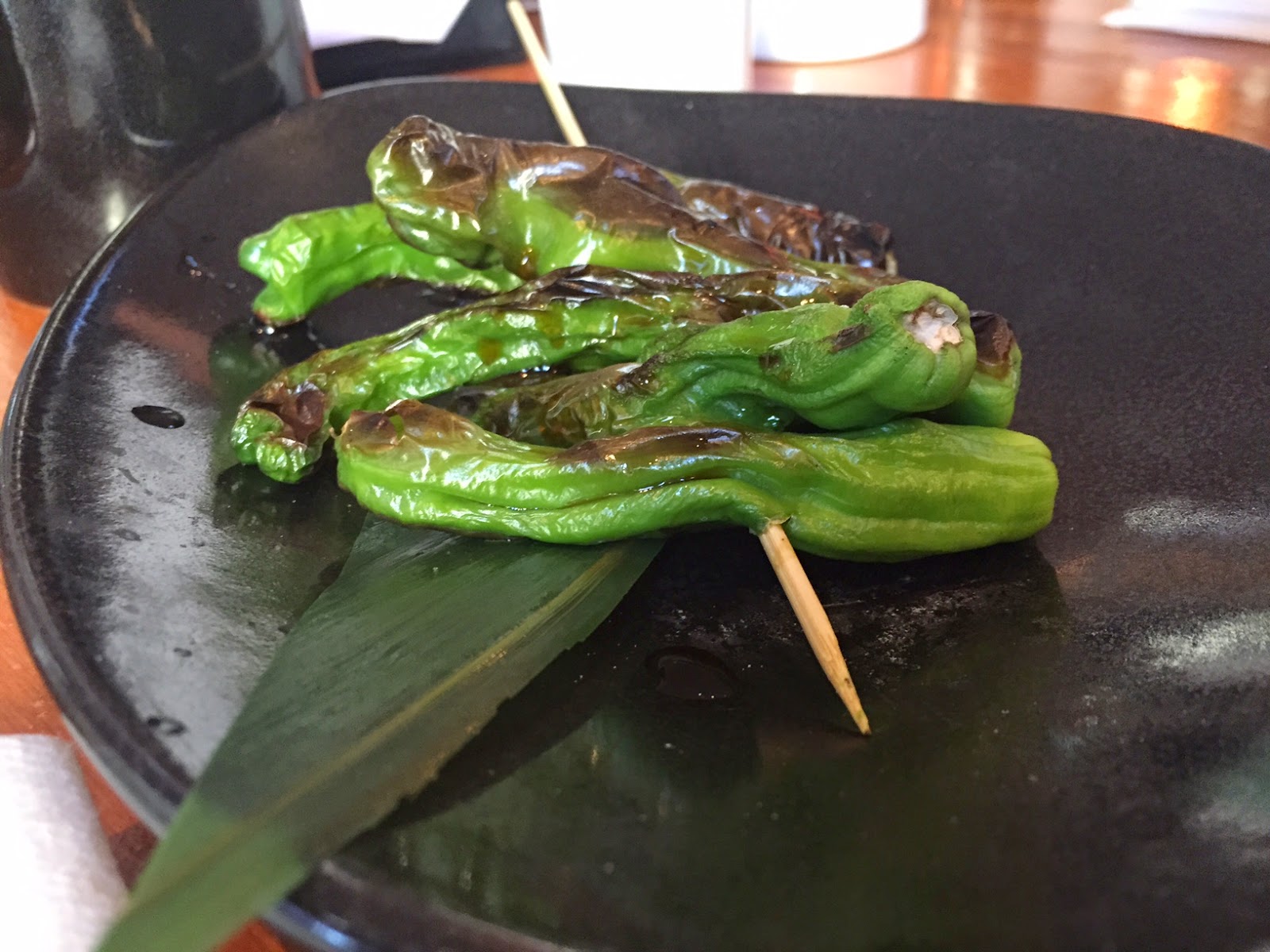 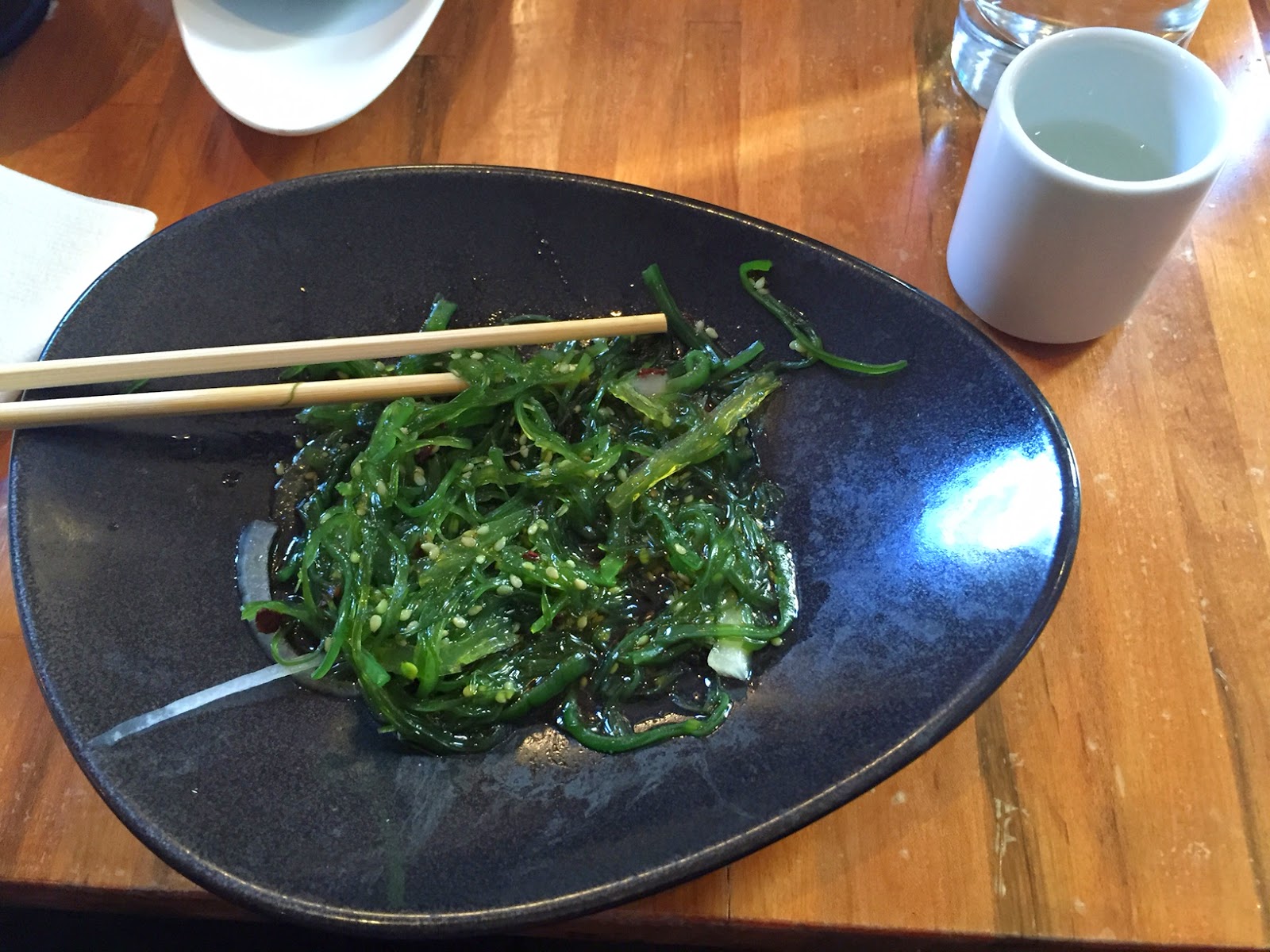 Cassi and Karen both ordered the Age-dashi Tofu without the bonito (fish) and dashi sauce (fish). So it was just fried tofu with radish. Yum! 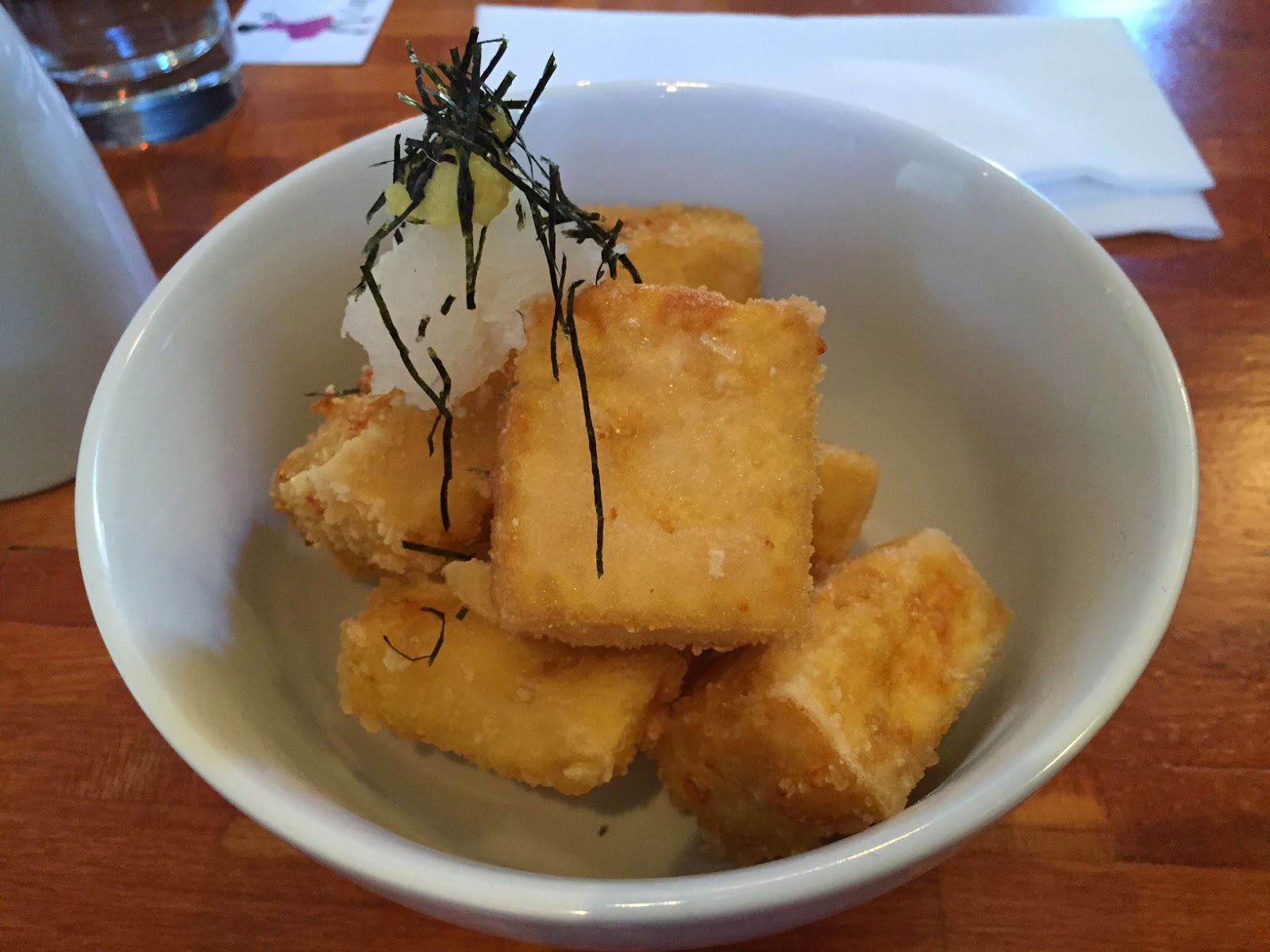 And of course, Cassi had to be difficult and go off-menu with her ramen order. The Yasai Ramen is already vegan and comes with veggies, but instead Cassi ordered the Yasai broth with fillings from another soup that isn't typically vegan. Hers had seaweed/soy broth with added seaweed and bean sprouts. 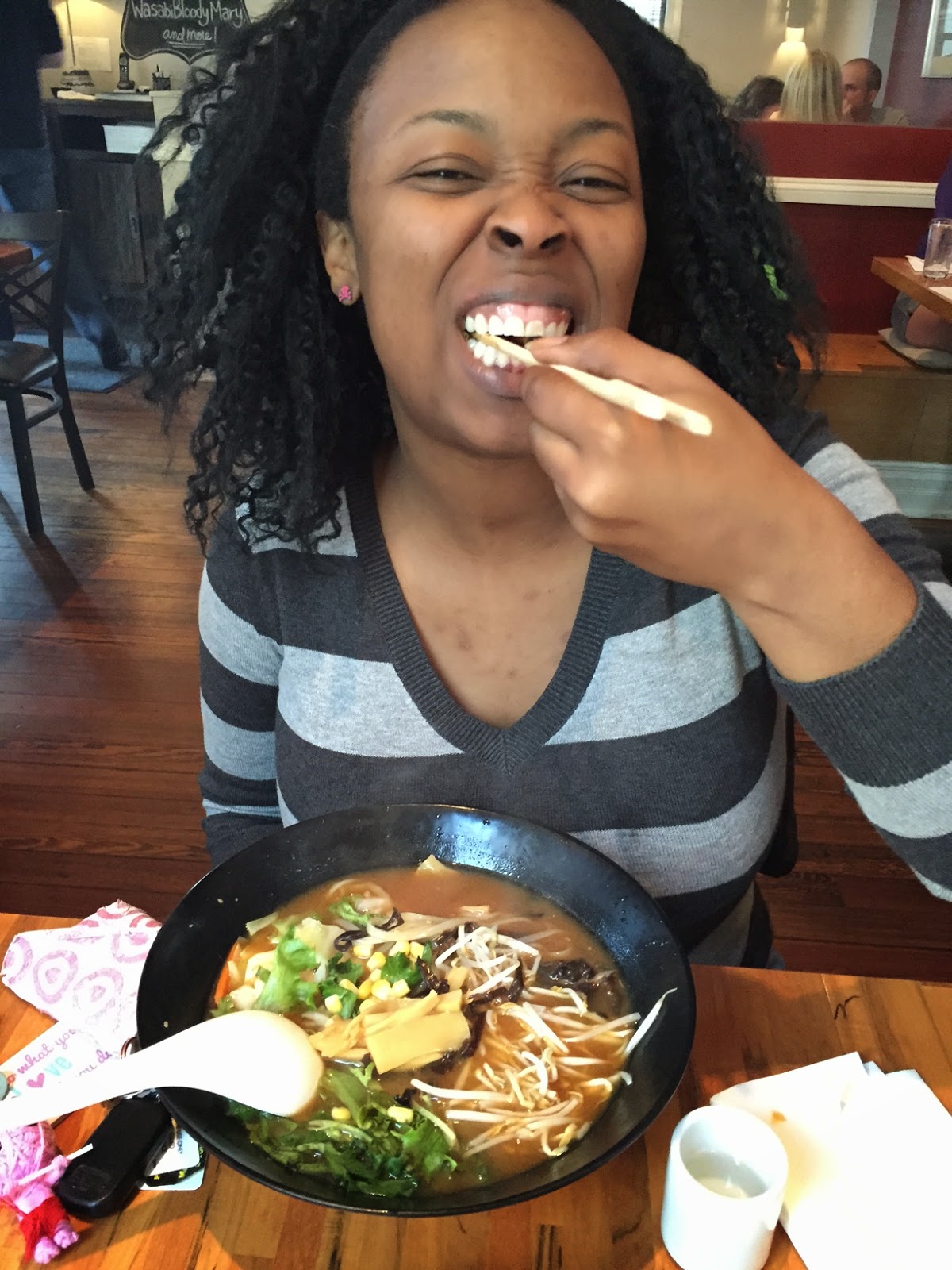 If you're local and want to hang out at the next Vegan Drinks meetup in May, here's our Facebook page!
Posted by Bianca at 8:48 PM

That place looks so good! I love Japanese food and I'd definitely have ordered that lemonade, matcha's my fave'.