As I've whined about mentioned numerous times over the last couple months, I'm a runner who can't run. And that's basically the worst. I started having knee pain around mile 7 during the Little Rock Half-Marathon on March 1st. But I kept running on it for 5 more miles because, well, that giant medal was pretty important to me! 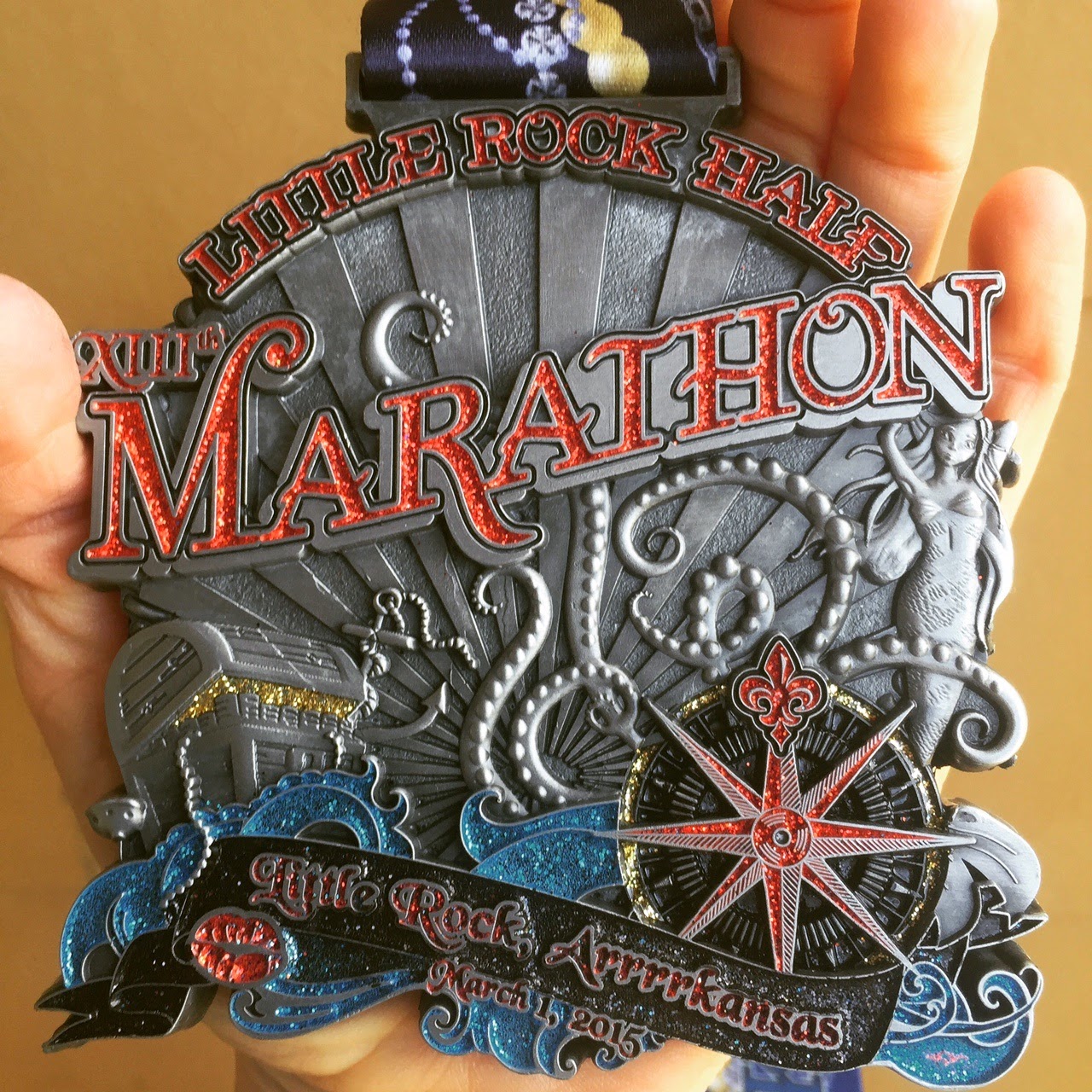 We didn't get the medals at the end of the race due to a delay in their delivery to the race organizers. But they were mailed out a couple weeks back. I was so excited to finally have this giant thing! Little Rock is known across the country for their giant medals. And the half-marathon medals are about half the size of the full marathon medals. Next year, I'm going for the big one.

But if I want to run a half next year, I've got to keep taking it easy right now. I've been on short walk/runs that don't hurt my knee. I've been doing strengthening exercises for my legs and hips and lots and lots of yoga! A few weeks back, Gaiam sent me two new yoga videos to review. One was Yoga for Runners! 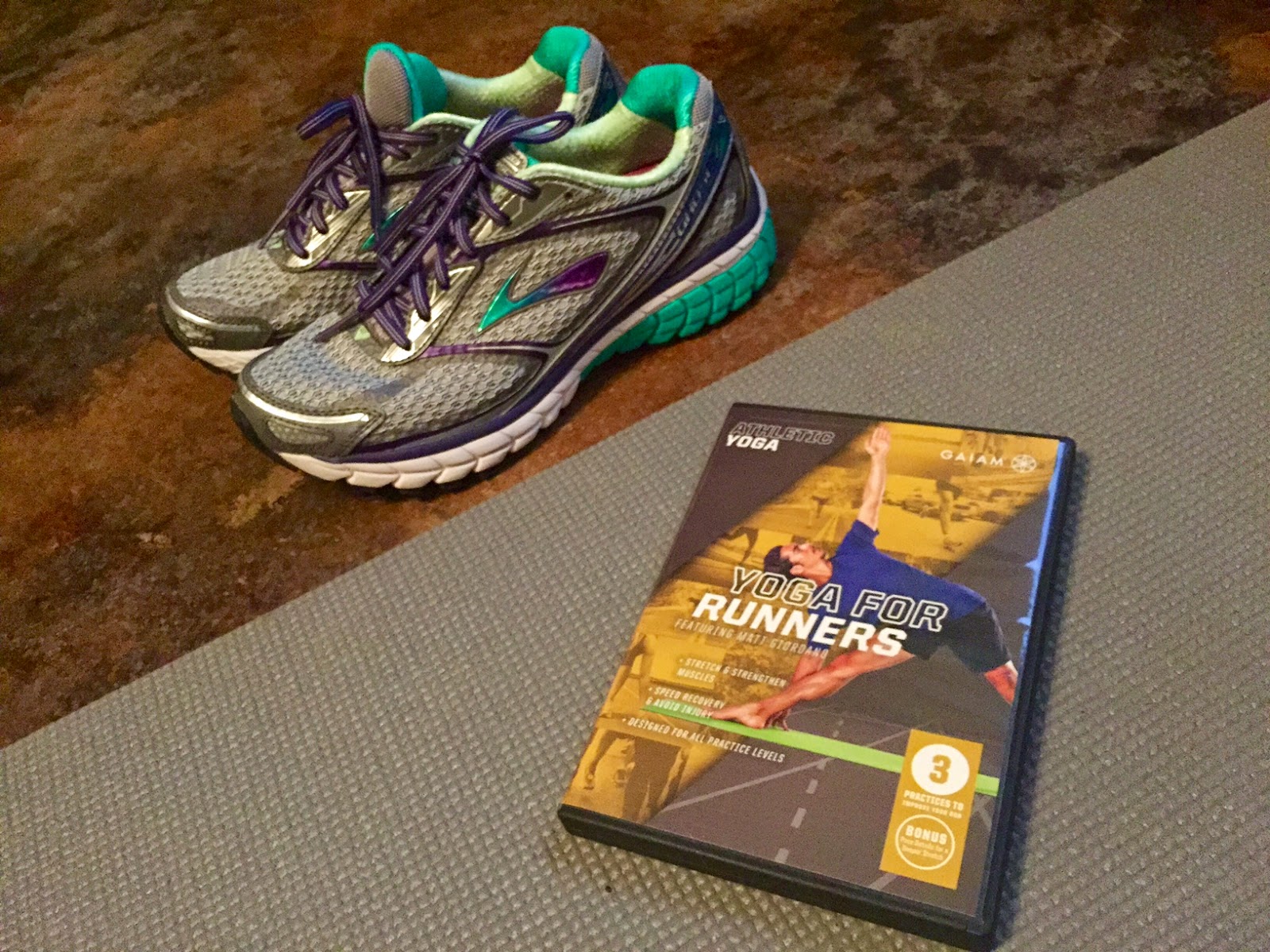 The pre-run practice focuses on loosening up joints and muscles for a safer running experience. There was lots of cat/cow and some of these hip openers (pictured below) that I like to call dog pee-pee poses. 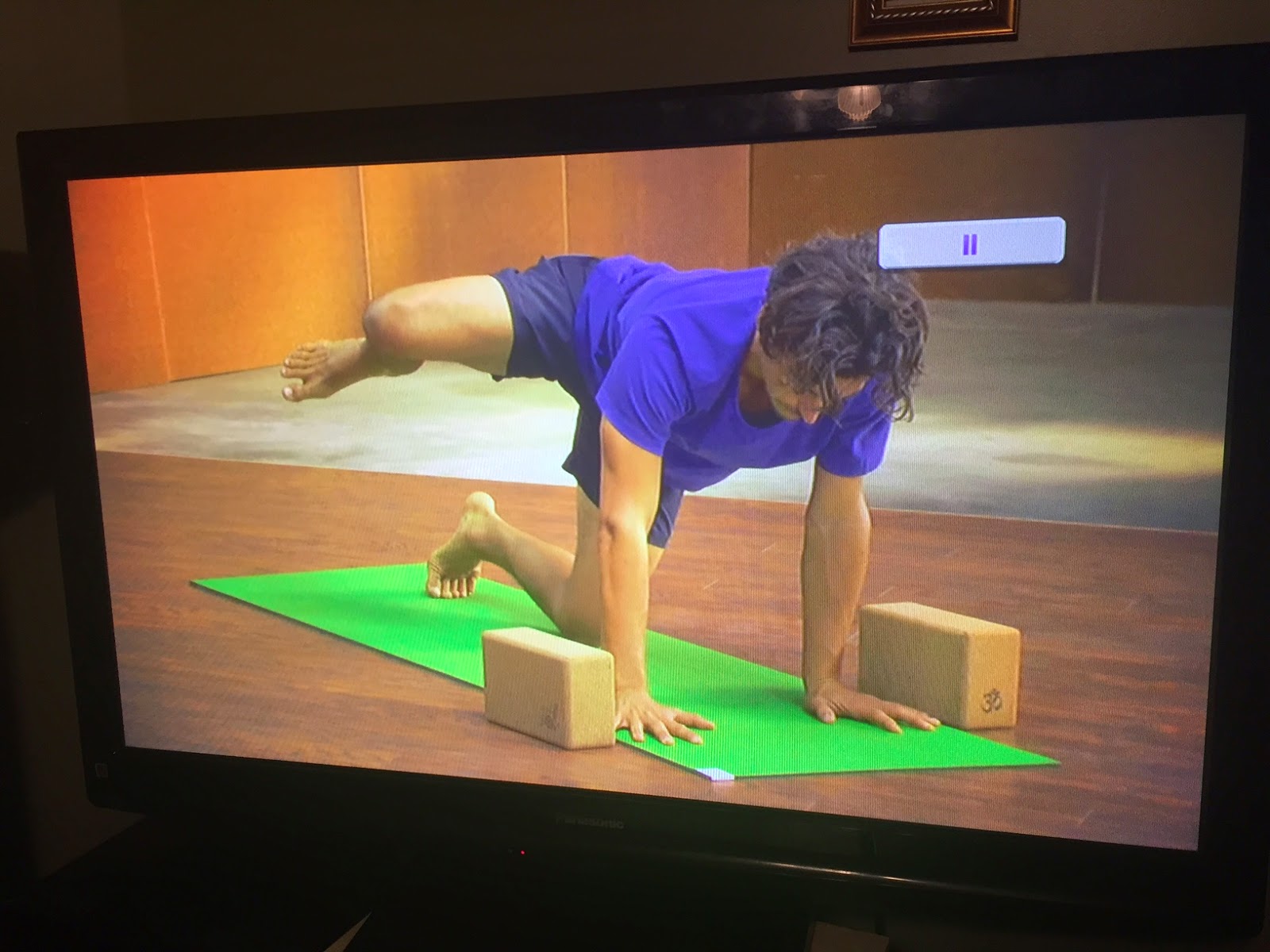 After the pre-run practice, I went out for that quick run. And I have to say that I did feel looser and more warmed up. I'm used to just rolling out of bed, downing a quick snack, and heading out the door for a run. But it definitely helps to do a little yoga first.

The post-run practice was my fave though. Because I'm so bad at stretching! I usually always stretch after every run, but I'm certain I don't do enough stretches, and I'm sure I don't hold them as long as I should. I figure that's part of why I keep ending up with injuries. The post-run practice offered some great stretches, and having a yoga instructor tell me how long to hold postures really helps. Here's one exercise from the video that I actually do manage to do after most runs! Love this one. 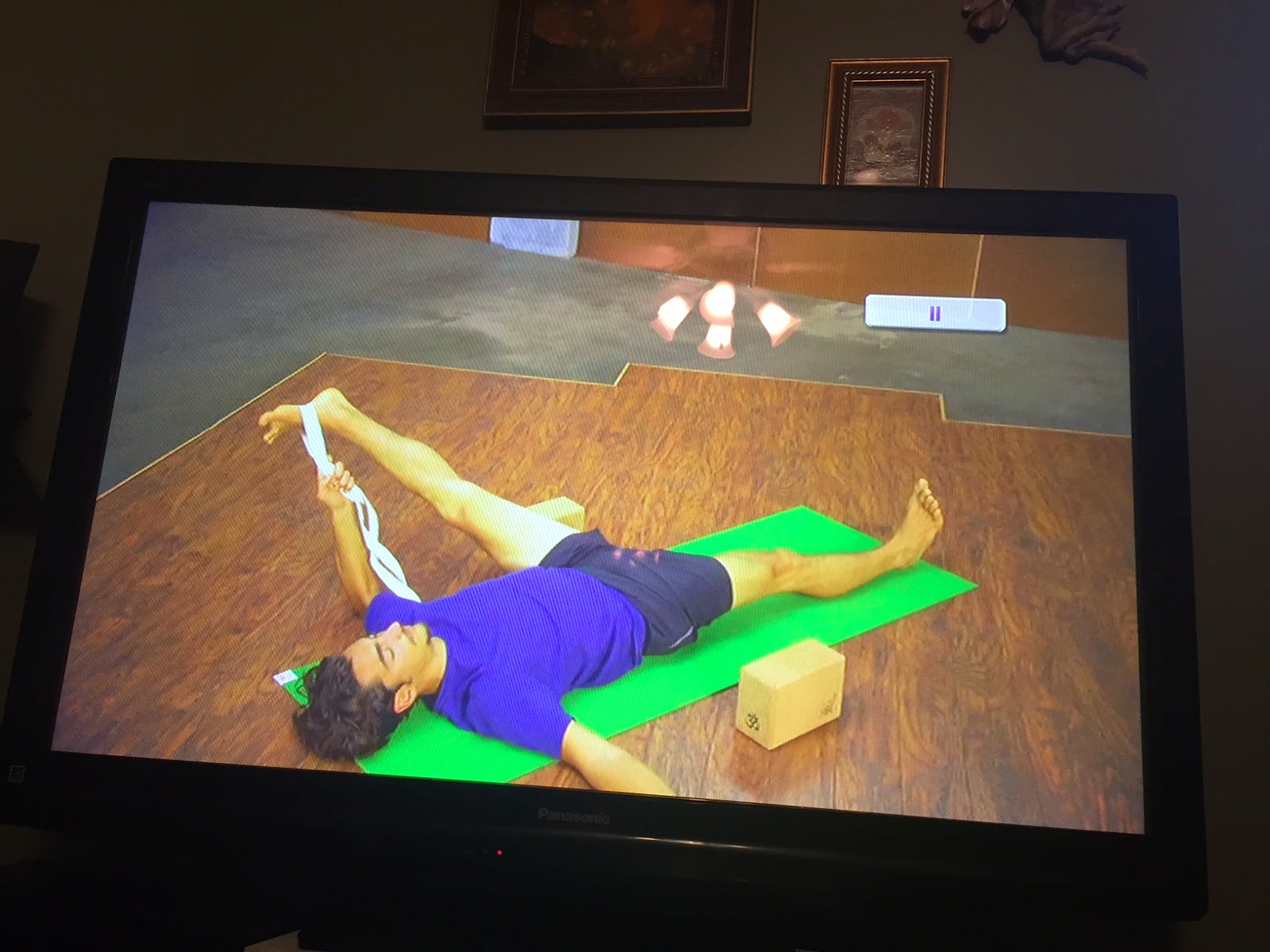 On the Yoga for Runners video, there's also a 20-minute Yoga for Conditioning practice to do on days that you don't run. I did that the next day, and it was very helpful. It focuses on realigning the bones and building body strength.

I usually put Maynard up when I do yoga in the living room, but he was laying on the couch being a good boy when I started the post-run segment. So I left him out. And then he decided to give me a dog tongue massage during Savasana! 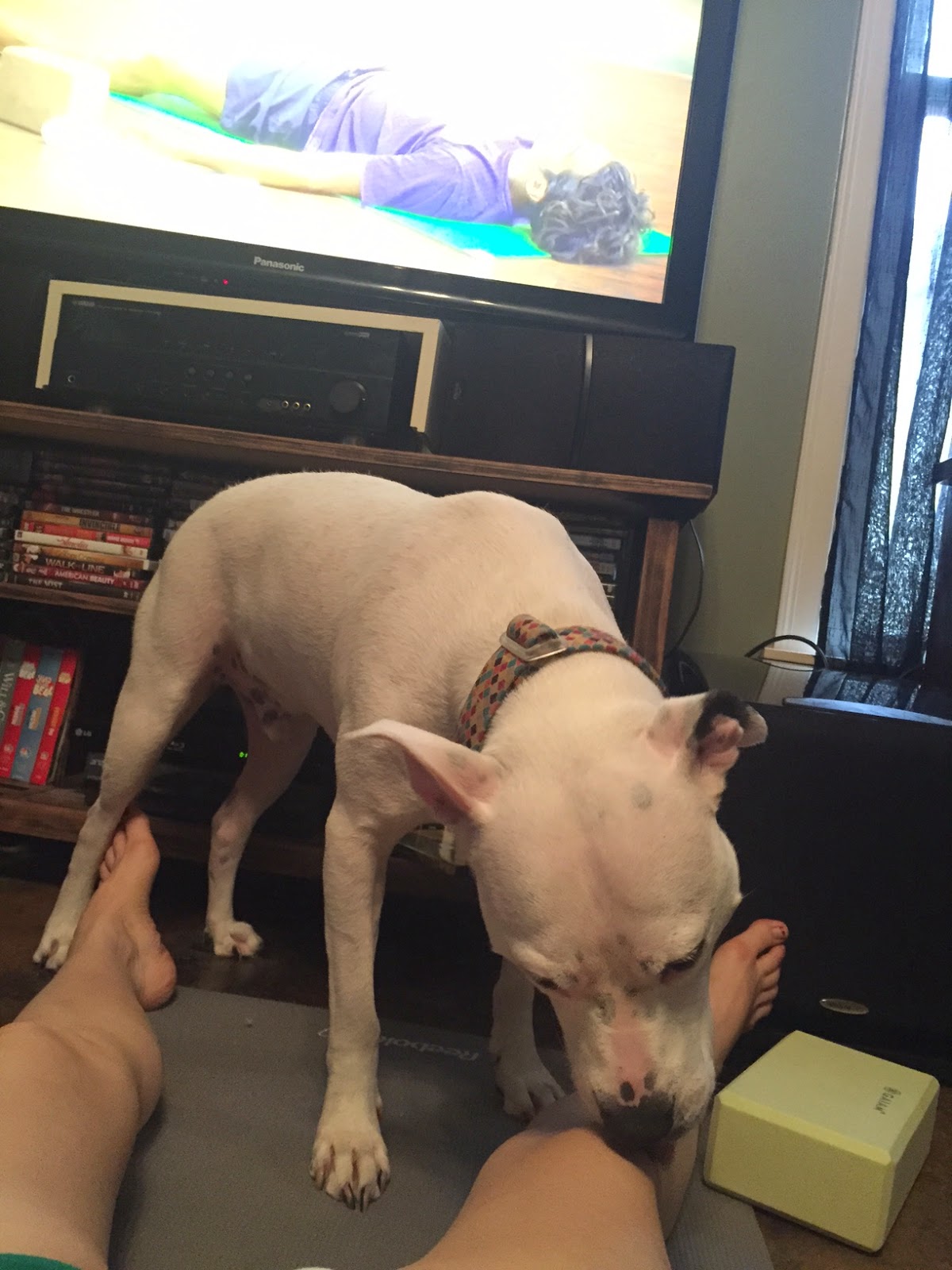 Gaiam also sent me this Hot Yoga for Beginners video. Now I LOVE Bikram. Love, love, love it. But I can't really afford to join a Bikram studio. Not to mention that I have a hard time finding time for the hour-and-a-half-long practices. 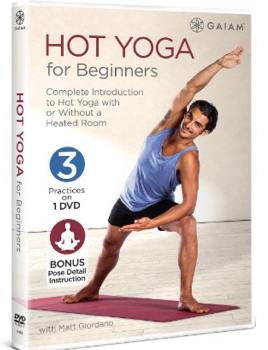 This video is actually not Bikram though, just more of a generic hot yoga practice. Bikram is a very specific set of 26 postures. But this video features poses commonly featured in hot yoga classes that aren't necessarily Bikram. And it says you can do this practice with or without a heated room because who can really heat their workout room to 105 degrees in their home, right?

I did bring a space heater in the room with me though. And I cranked it up on high. The room got a little toasty since it was already about 78 and muggy in my house that morning. 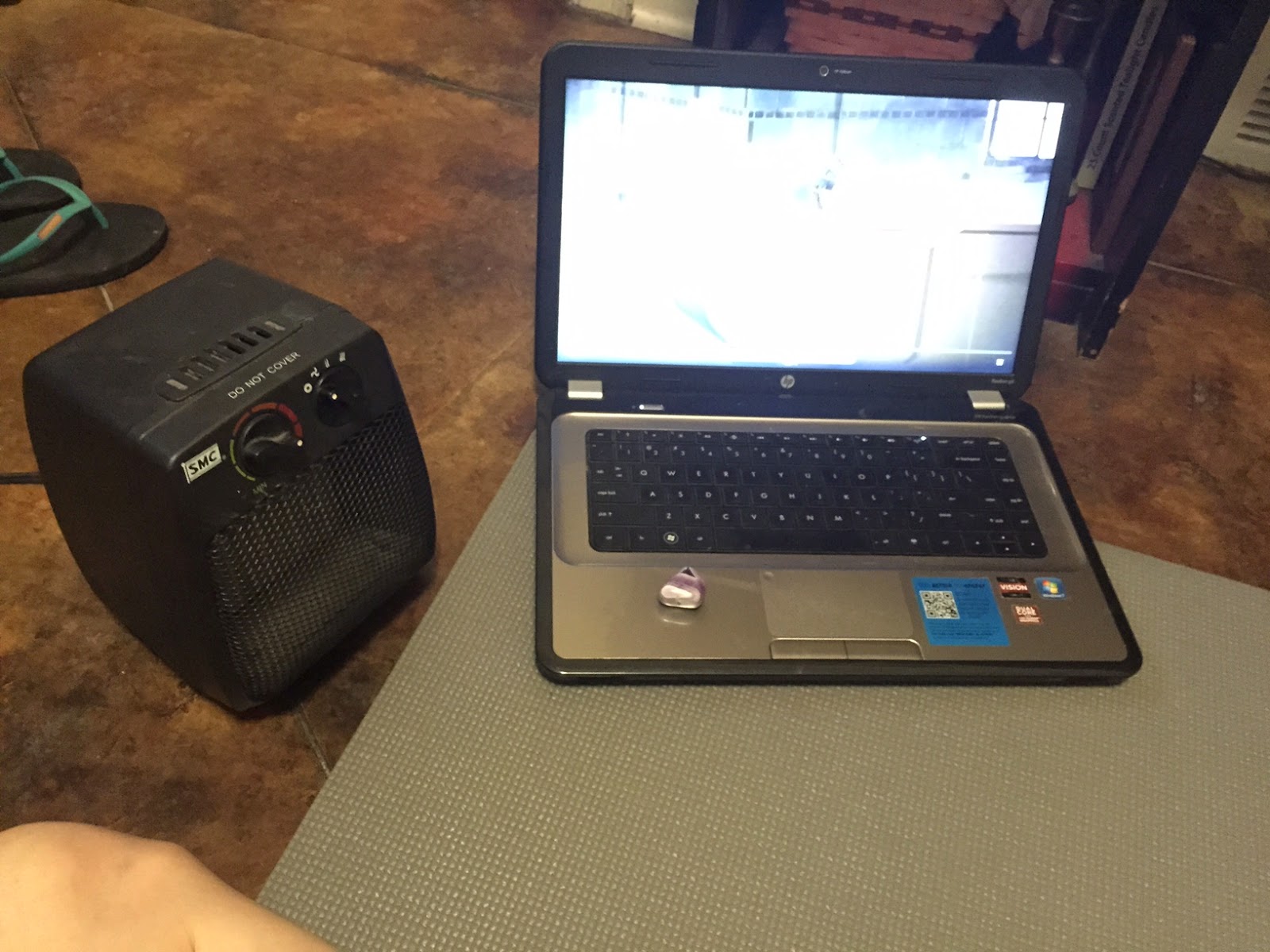 This video has three separate 20-minute practices that can done on their own or all together. I did all three back-to-back. The first segment focused on heating up the body, the second on igniting the body, and the third on simmering down. That igniting segment contained LOTS of planks and chaturangas. Talk about igniting! My arms and chest were so sore the next day! Still are. But you know, good sore. Like the kind of sore that lets you know you did something awesome for yourself.

And I love that the video has one of my favorite poses — Lord of the Dance pose! 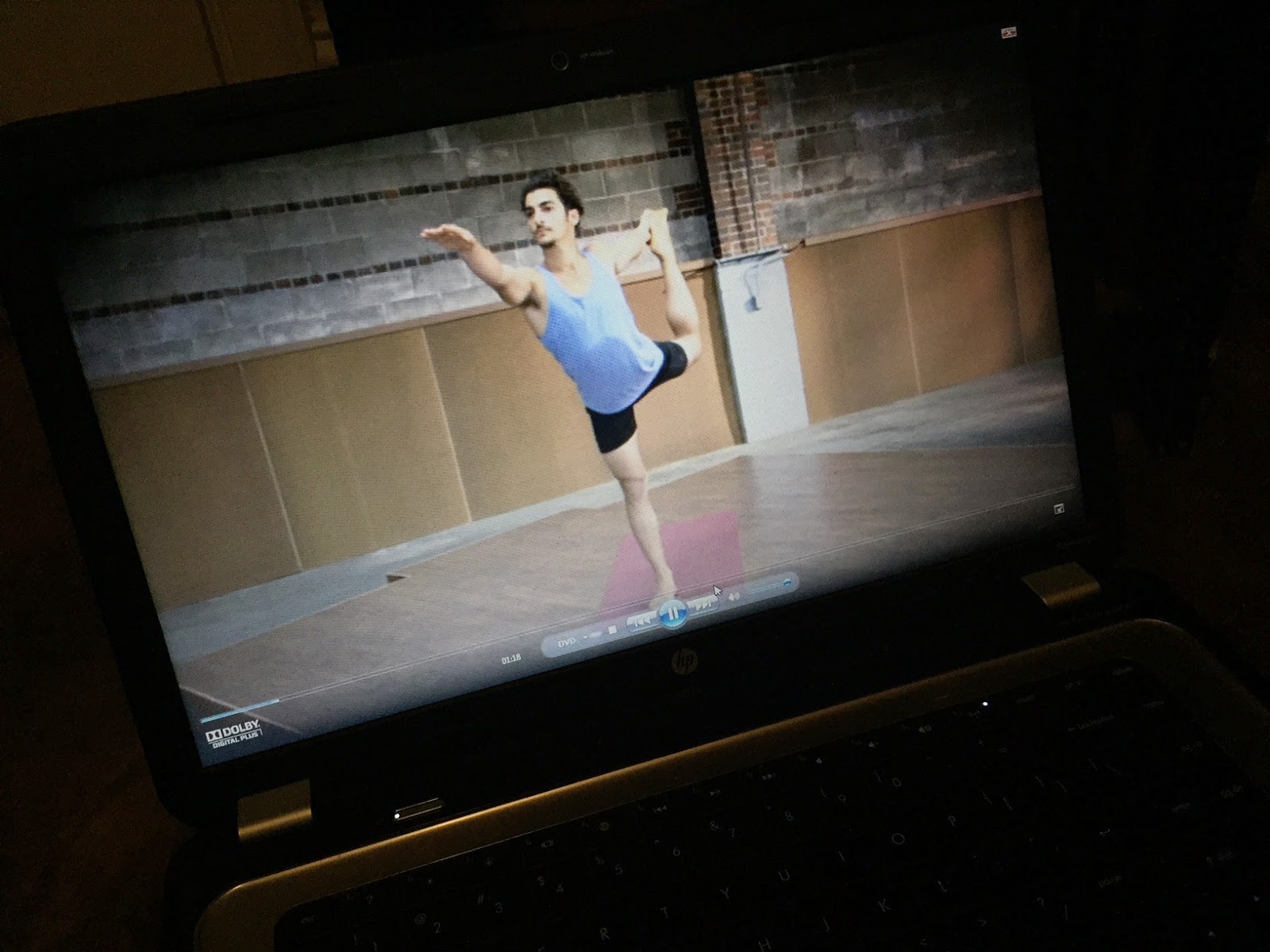 I'd definitely recommend both of these videos. But Yoga for Runners is my fave!
Posted by Bianca at 10:26 PM

Congrats on the honking, gorgeous medal. Good job!
If your knee pain is on the outside of your knee, it very well could be your IT band. I suffered from ITB issues for a few months and had to go to physical therapy and cut my mileage way back. Feel free to message me on FB and I can tell you exercises,stretches that helped me. This happened 2 years ago and I've been running 50+ miles pain-free ever since. (And I'm 50 yo, haha--so a young whippersnapper like you will bounce right back! ;) xx

I love birkam yoga so much! It is my main form of exercise now. My knees are bad from just the way I am put together, so running is completely out for me.