Cheribundi, the makers of all-natural tart cherry juice, has launched their 7-day Cheribundi Challenge. It's pretty simple. Drink cherry juice for 7 days, and supposedly, you'll see some health benefits. On their website, they claim that cherry juice can help improve sleep, fight inflammation, and boost athletic recovery. They sent me some cherry juice so I could take the challenge and blog about! 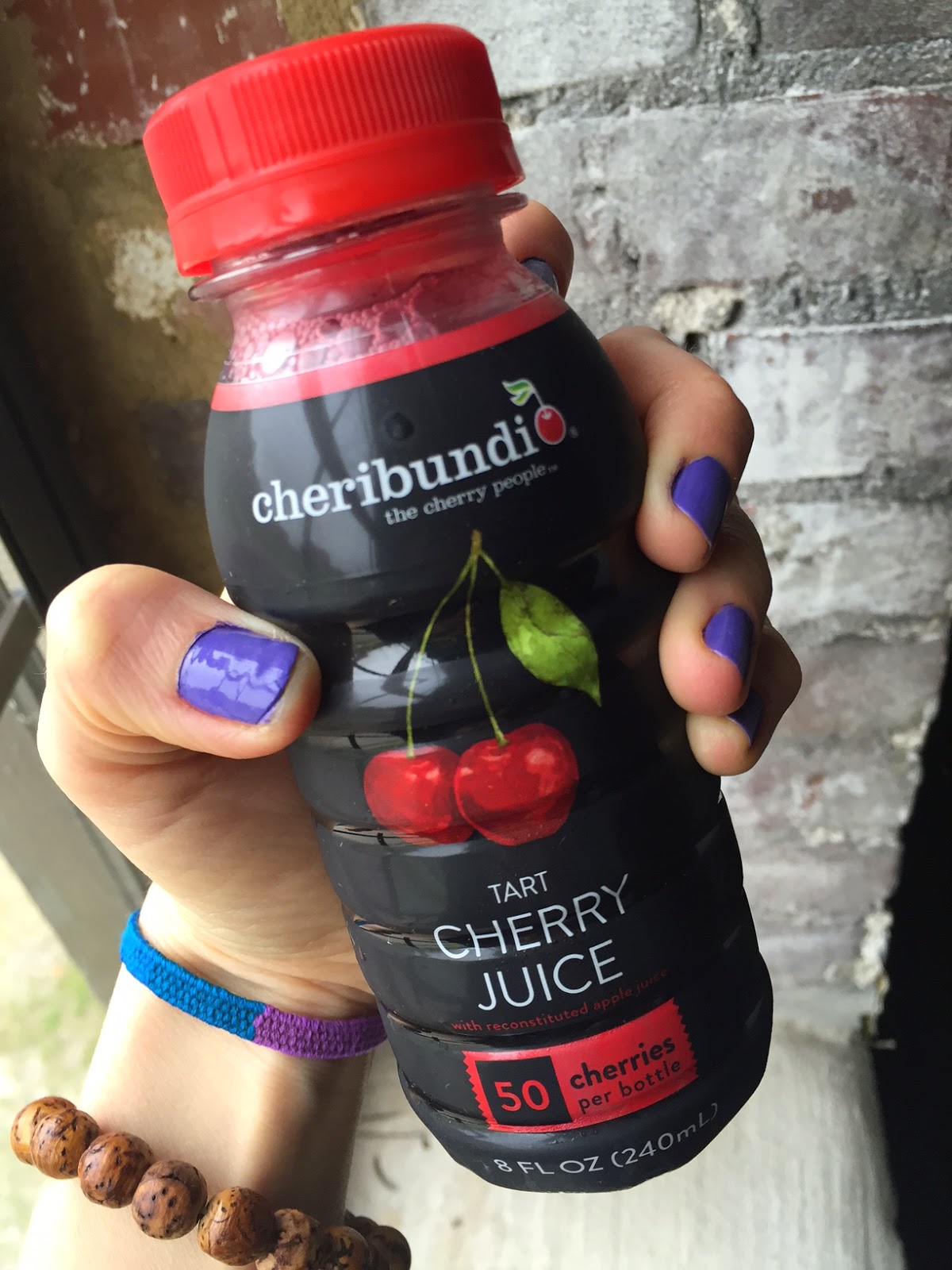 I don't have problems sleeping. I fall asleep as soon as my head hits the pillow and sleep like a log until my alarm goes off in the morning. And even then, I don't hear it most of the time. And I'm currently not all that athletic since I've been dealing with a nagging knee injury that's kept me from running.

But one thing I do have is pain. Runner's knee, to be exact. Ever since the Little Rock Half-Marathon, I've been dealing with what I believe to be IT band issues causing knee pain. I've been icing and foam-rolling and doing exercises designed to build strength in the hips. Since I'm hoping to be ready to train for a marathon in a couple months, I'm really trying to take it easy.

I embarked on the Cheribundi Challenge hoping this tart cherry juice would help manage that knee pain. According to the Cheribundi website, there's a theory that phytonutrients and anthocyanins in tart cherries combat aches and pains associated with everyday activities by blocking the enzymes that cause inflammation.

So I drank one 8-ounce juice everyday for 7 days. And while my knee still hurt from time to time, like when I did any squatting or attempted to run, the pain did seem to lessen quite a bit. I started the challenge a few weeks ago, right after I returned from Seattle. And at that time, my knee was hurting even while walking because I'd done SO MUCH walking in Seattle. That subsided during the cherry juice week, and now it doesn't hurt at all while walking. Is it fixed? No. But cherry juice isn't a miracle cure. I wish it could heal my knee, so I could run again. But only time and strength training can do that.

As for the taste, it's delicious. Tart and sweet at the same time. Each bottle contains 50 cherries! That's an insane amount of cherries that you could never eat in one sitting. Plus, it's sweetened with apple juice, not sugar. My only complaint would be the high calories. The regular cherry juice has 130 calories per 8 ounces, and since I'm not running, that's a big chunk of my snack calorie allotment. I'm having to eat less calories since I'm not as active. But Cheribundi does make a light version with five less cherries per bottle that's only 80 calories. That's more my speed.

By the way, I got pretty creative with my daily juice. Some days, I drank it straight from the bottle. But other days, I mixed it into smoothies. This one had frozen banana, cherry juice, cashew milk, and hemp protein. 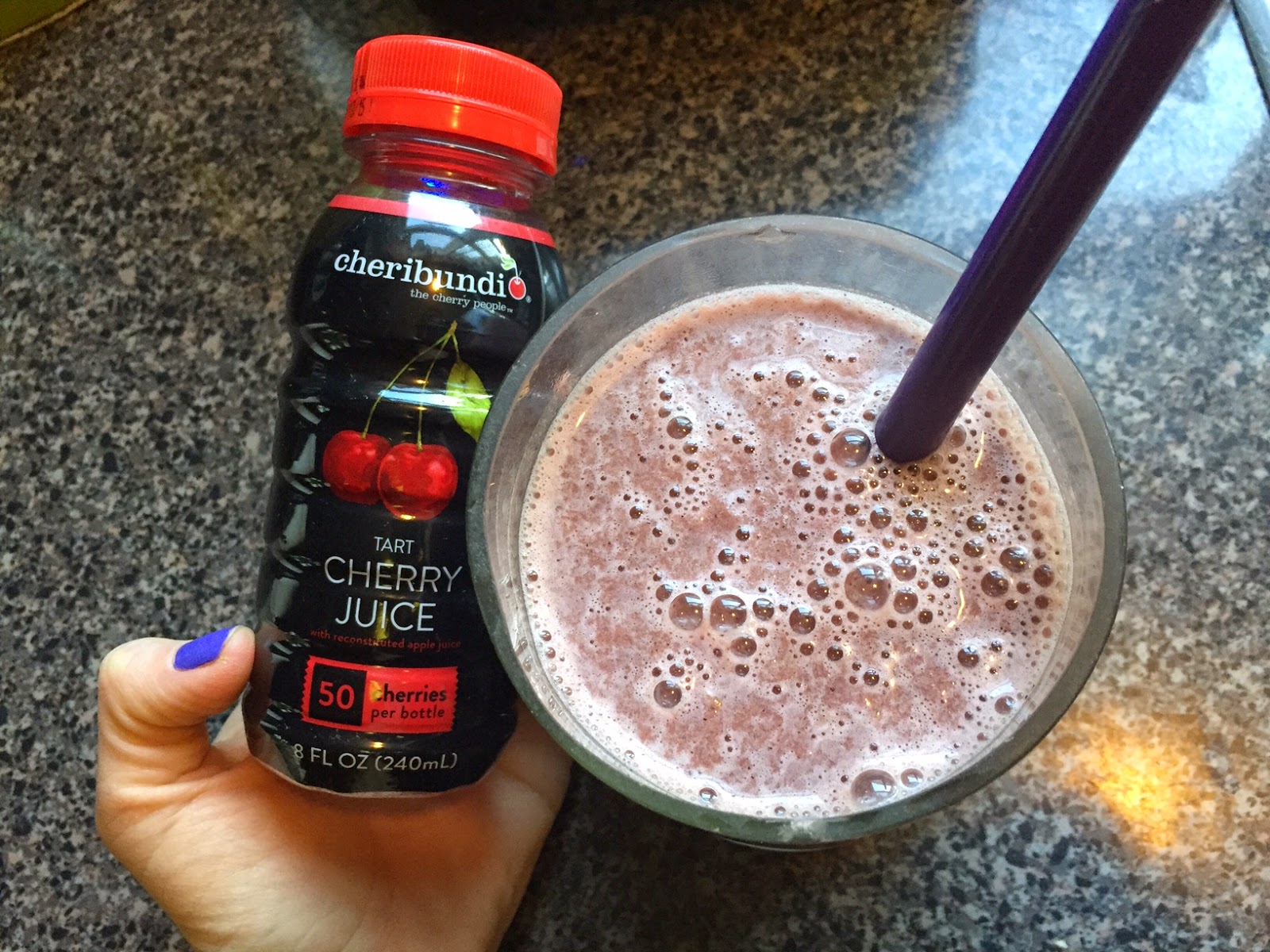 And other days, I spiked my cherry juice with vodka. Yum! This has Absolut Blueberry Acai vodka, cherry juice, and lime juice. This was definitely my favorite way to drink it! 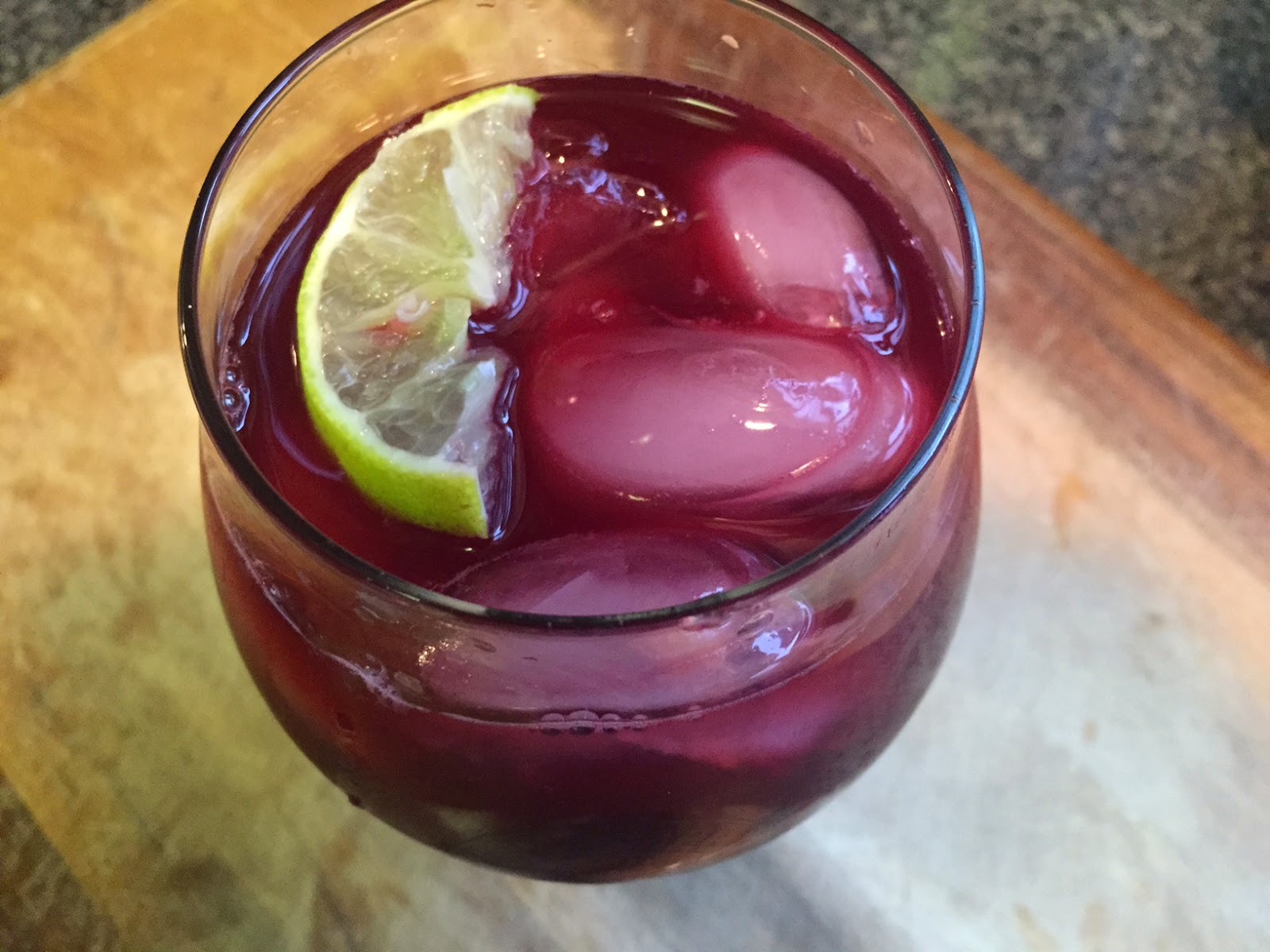 I stuck with the original cherry juice for the challenge, but Cheribundi also sent me some of their Refresh juices to try. This Tart Cherry Lime Refresh was my fave! 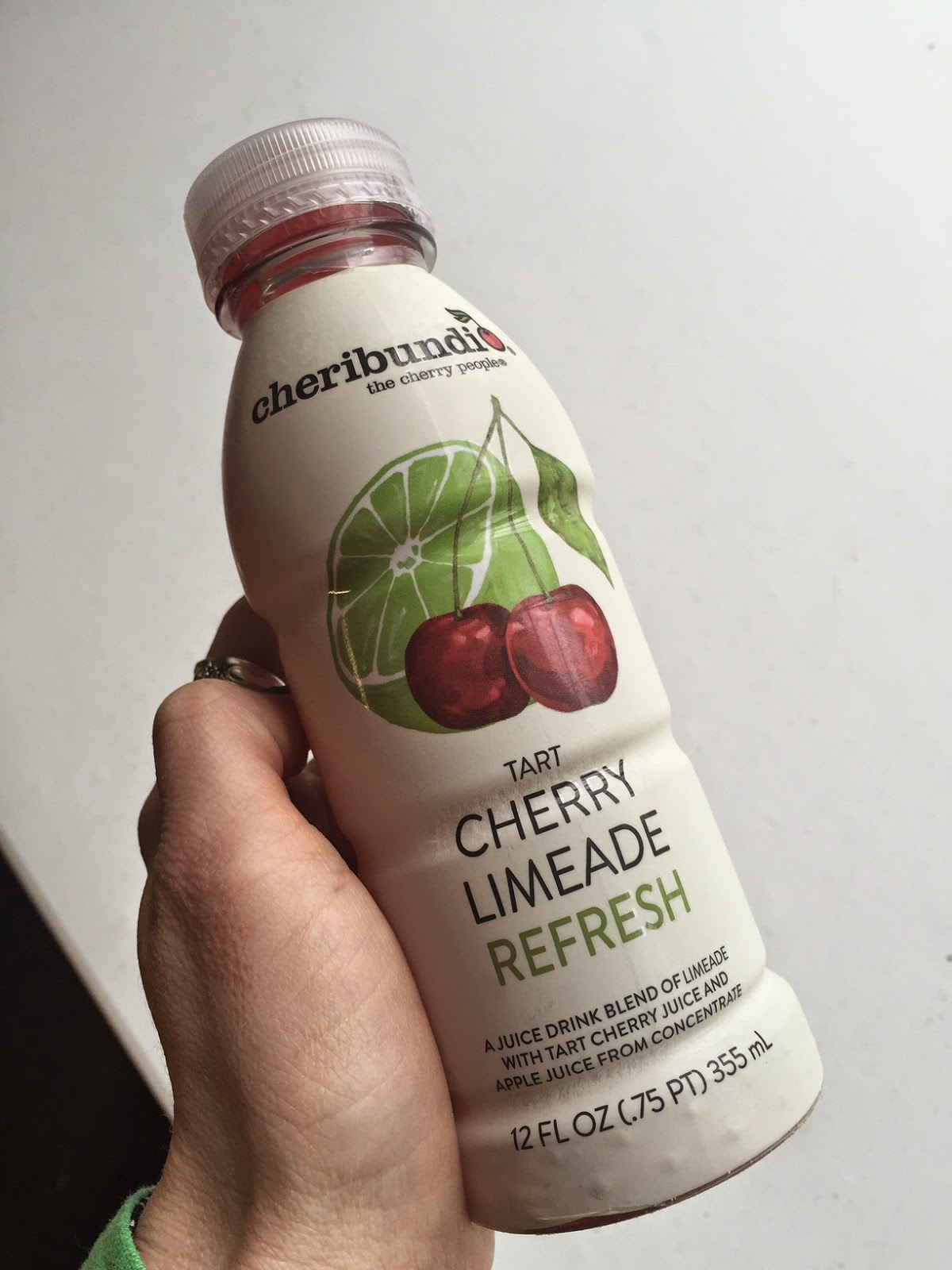 This has less cherries per bottle, but it's mixed with other fruit juice. In this case, it was cherry and lime. Reminded me of a Sonic Cherry Limeade but much healthier!

I also tried the Tart Blueberry Refresh Juice. Cherry and blueberry go so well together! 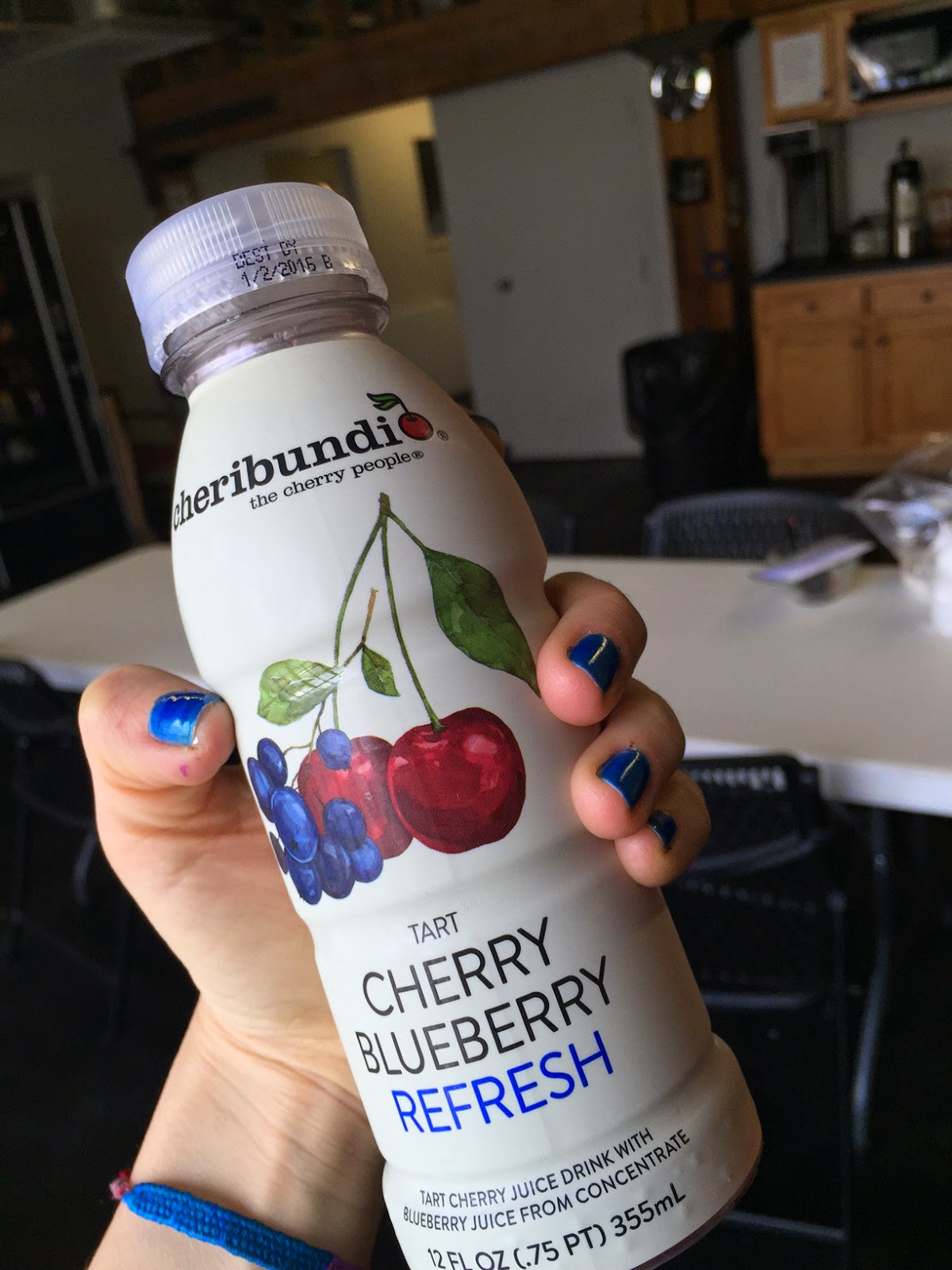 I'd love to work cherry juice into my daily routine. But the calories are a little prohibitive. If I were to make this a regular thing, I'd definitely go with the light juice instead. But then again, if I were able to run again, I might be able to work in the original daily. And since it's said to help with muscle soreness and oxidation, this would be great for post-run recovery!
Posted by Bianca at 10:33 PM

pretty sure I could eat 50 cherries at a sitting! :)

Ha ha. My thoughts exactly. I am a cherry FIEND

You're really having calorie issues with a juice that is 50 calories more per serving than its light counterpart? A juice that is only meant to be consumed once per day? Bianca, I like your blog a lot, but as someone who has struggled mightily with disordered eating, you can be a trigger. You're thin as can be, and I love that you're real about your love of fried food...but every time you talk about your strict calorie counting, I wonder what I'm doing wrong because I try to eat in moderation and exercise regularly, but I am easily double your size, probably triple. I guess I don't have a point, but...it's hard to read your blog and to genuinely like Internet-you so much and to find you so triggering at the same time,

It took a little bit of getting used to. Actually I put it aside for a while. But after a 4 mile run, it was all I wanted to drink and for some reason it tasted heavenly. Now cherry tart juice ain't so bad! Just my story!