But tonight, I want to talk a little about dining out as a vegan. I'd say one of the most frequent questions I get asked is, "Isn't it hard living in Memphis and trying to find vegan food in restaurants?" My answer is always an emphatic "No way!" As you can probably tell from my past posts and my Bluff City Vegan Eats series, Memphis is actually a very vegan-friendly city. Check out my Memphis vegan dining guide.

We have three totally vegan restaurants — Imagine Vegan Cafe, Two Vegan Sistas, and Cosmic Coconut — and a huge list of vegan-friendly eateries offering special vegan menus, vegan cheese, vegan desserts, and all sorts of delicious options. But like most cities, we also have those places that just don't seem to cater to vegans — BBQ joints, soul food restaurants, New Orleans-style cafes, steakhouses. What's a vegan to do when she ends up joining her omni friends at a place without obvious vegan options?

You make a meal! That's what. I have this theory that vegans can eat (almost) anywhere. It just takes a little creativity and a willingness to speak up and let your server and chef know about your special needs. That's what I did tonight at the VIP soft opening for Lafayette's Music Room in Overton Square. This is a new music venue fashioned after a 1970s venue of the same name. And the menu is New Orleans-style seafood and po'boys. At first glance, not one dish is vegan.

But there are a couple salads that, ordered without the cheese, look to be vegan. For my starter, I opted for the Lafayette's Salad with bibb lettuce, roasted tomatoes, crispy strips, and citrus vinaigrette. 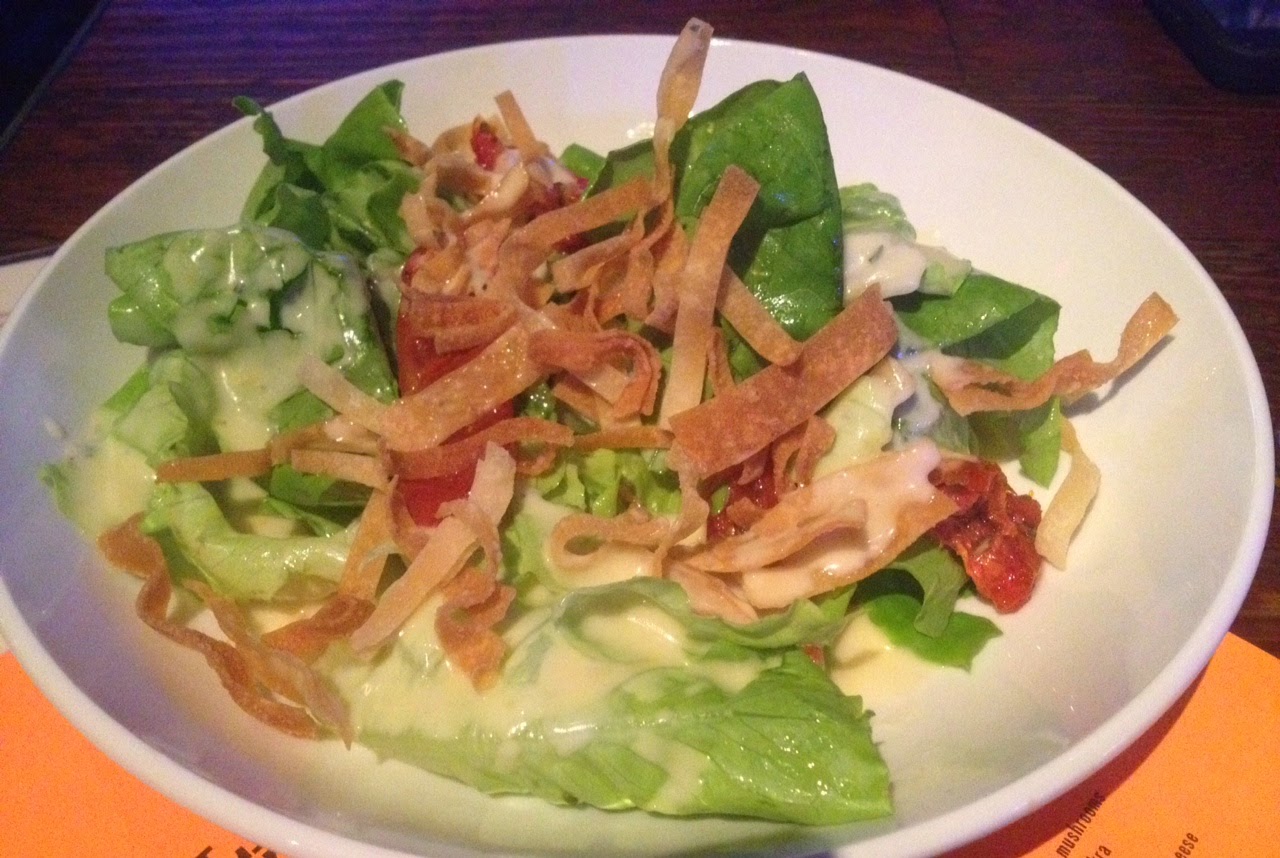 Now, I can't say with certainty that the wonton strips are vegan, but many of those salad wonton strips are. With things like that, I just hope for the best. This was delicious! The roasted tomatoes paired so well with the citrus dressing, and that bibb lettuce was so tender.

For my main, it took a little more creativity. The only pizzas on the limited soft opening menu were a Cajun Crawfish Pizza, a Buffalo Chicken Pizza, and a Shrimp & Andouille Pizza. But after informing my server that I was vegan, here's what we came up with. 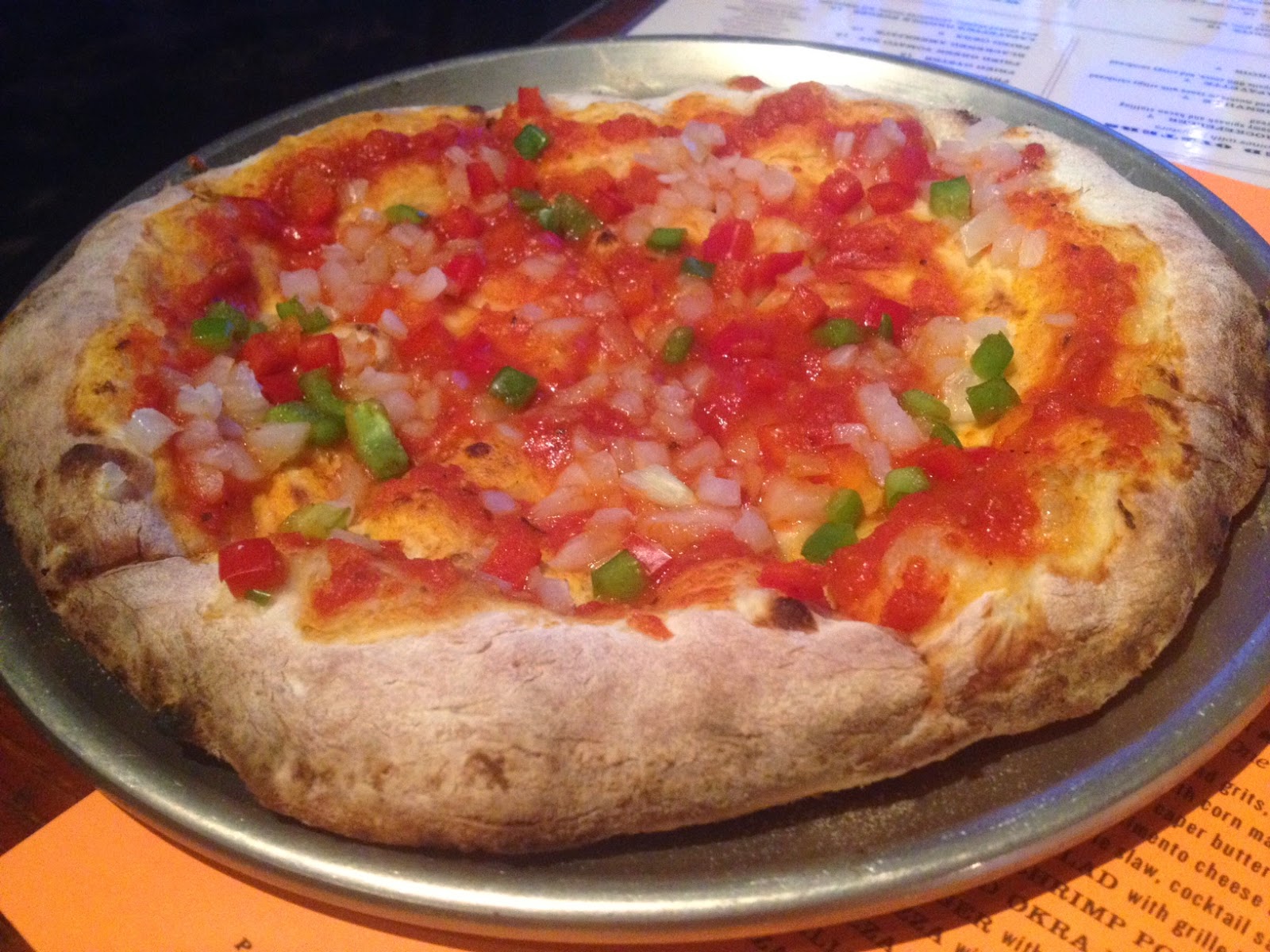 It's a simple Vegetable Pizza with marinara, diced onion, diced tomato, and diced bell pepper. It may not be loaded with vegan cheese like a pizza I'd make at home, but sometimes, I enjoy a cheese-less pizza. The original Italian pizza napoletana is just made from dough with tomato sauce, oregano or basil, a little garlic, salt, and olive oil. And that's not much different from this pie. Plus, this was wood-fired, and the lack of cheese really allowed the delicious flatbread to shine.

Working with the chef and server may not work in every restaurant every time, but I'd guess that it works about 90 percent of the time. And when all else fails, there's typically always fries and salad. I wouldn't want to eat fries and salad every day, but I'm not lying when I say that I do enjoy that vegan desperation dinner from time to time.

What are your favorite ways to tweak non-vegan menus?
Posted by Bianca at 10:56 PM

I did my master's thesis (in part) on this very subject, at the UofM :) I miss Memphis every day and love your blog for making me feel "home" for a few moments each morning!

I love a no-cheese pizza occasionally especially when the dough looks that good.