It's Day 2 of Vegan Mofo, and I have my first mofo giveaway, thanks to boozy, cheesy vegan cookbook author John Schlimm's awesome publisher. I'll be giving away John's new book, The Ultimate Beer Lover's Happy Hour: 325 Recipes for Your Favorite Bar Snacks and Beer Cocktails, at the end of this post with a special social media contest. (Hint: You have to make salsa to enter). 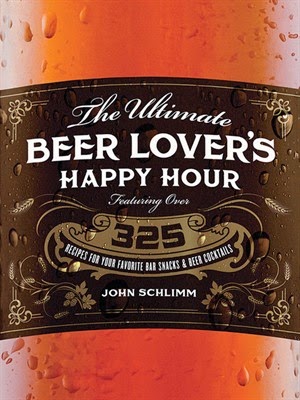 But first, I want to post a little review of the book. Admittedly, I might be a little biased because I already super-love John Schlimm. He's the author of a ton of cookbooks, but most have something to do with one of my two favorites things — boozin' and cheezin'. The Tipsy Vegan and The Cheesy Vegan are among some of my fave kitchen tomes, so I knew this new beer book would not disappoint. Plus, I'm kind of a beer snob. I like a fine beer like some folks like a fine wine.

Unlike The Tipsy Vegan, where most of the recipes contain booze, The Ultimate Beer Lover's Happy Hour doesn't feature beer in every recipe. Rather, it's a combination of foods you would pair with beer and some recipes for cocktails featuring beer. As for the food section, there's a chapter on bar snacks (think spicy nuts, popcorn, and homemade potato chips), one on small bites (deep-fried veggies, fries, jerky), one on dips and sauces (salsas, hummus, spicy mustard dip), one on pub grub (potato skins, salad with beer dressing, slaws, kabobs, grilled cheeses), and one on pizzas and burgers.

Now, I'm not typically a portabella burger kinda girl. I'd rather have a hearty bean burger or something with tofu or seitan. But I had most everything on-hand to make John's Grilled Portabella Burger, and my Mofo theme is Pantry Raid, so I'm trying to eat meals that I don't need to buy much to make. Plus, this mushroom burger just sounded fantastic. 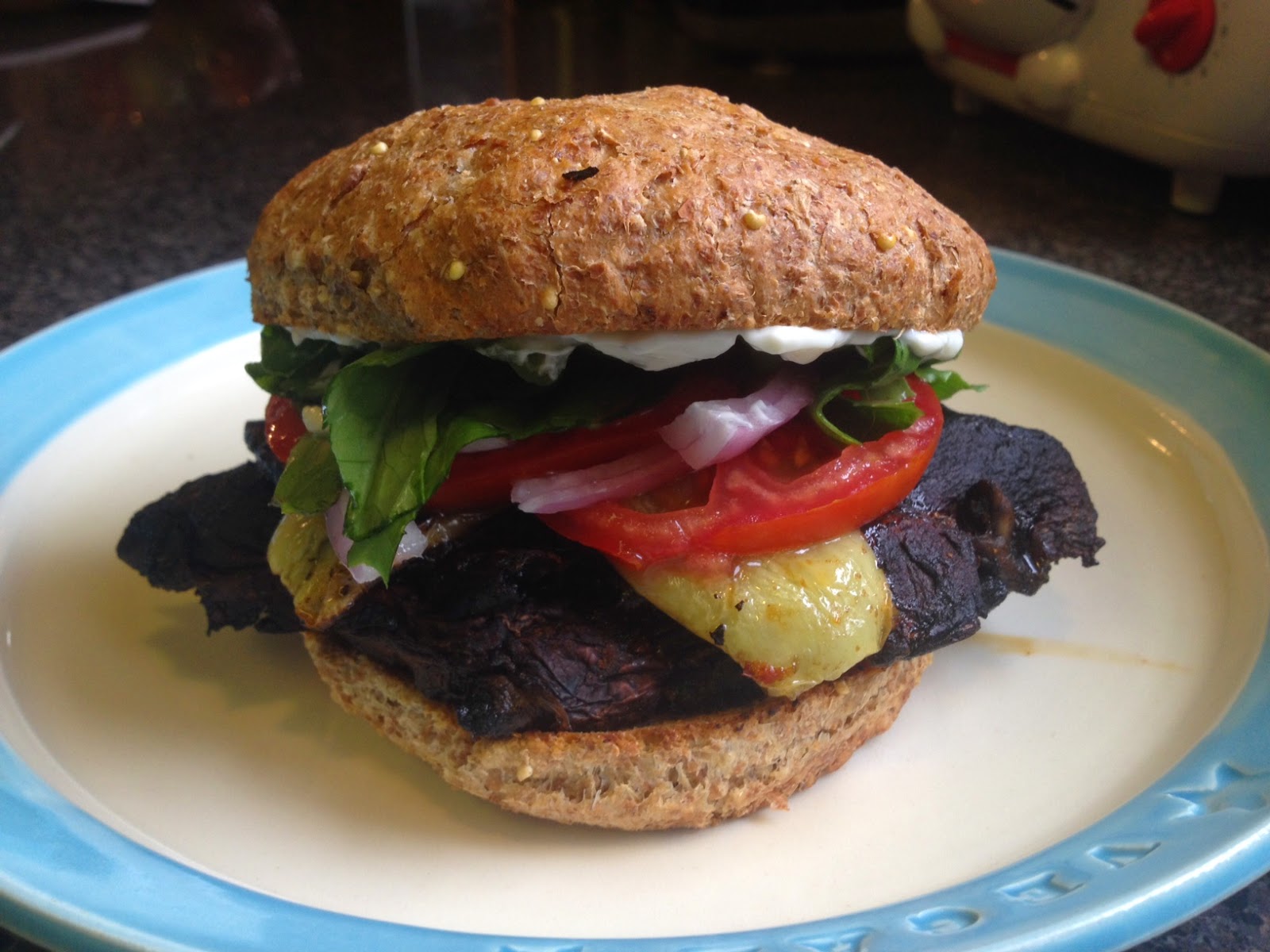 And it was! The mushroom cap is marinated in all sorts of stuff (oil, balsamic vinegar, Old Bay, vermouth, minced jalepenos, garlic and onion powder, etc.) and then it's grilled. You also grill fresh chile peppers. The recipe called for Anaheim chiles, but I had hot banana peppers in my garden. And in keeping with my Pantry Raid theme, it made the most sense to sub out. There's a tarragon vegan mayo spread that I made using my stash of Vegenaise (courtesy of Follow Your Heart for review!). Plus, lettuce, tomato, and red onion. And it's all stacked in between an Ezekiel sprouted grain bun. Yummy!

For my side, I scoped out my pantry and fridge and found a half-tub of Tofutti Better Than Cream Cheese that needed to be used. That made the perfect base for these Bar Top Poppers. 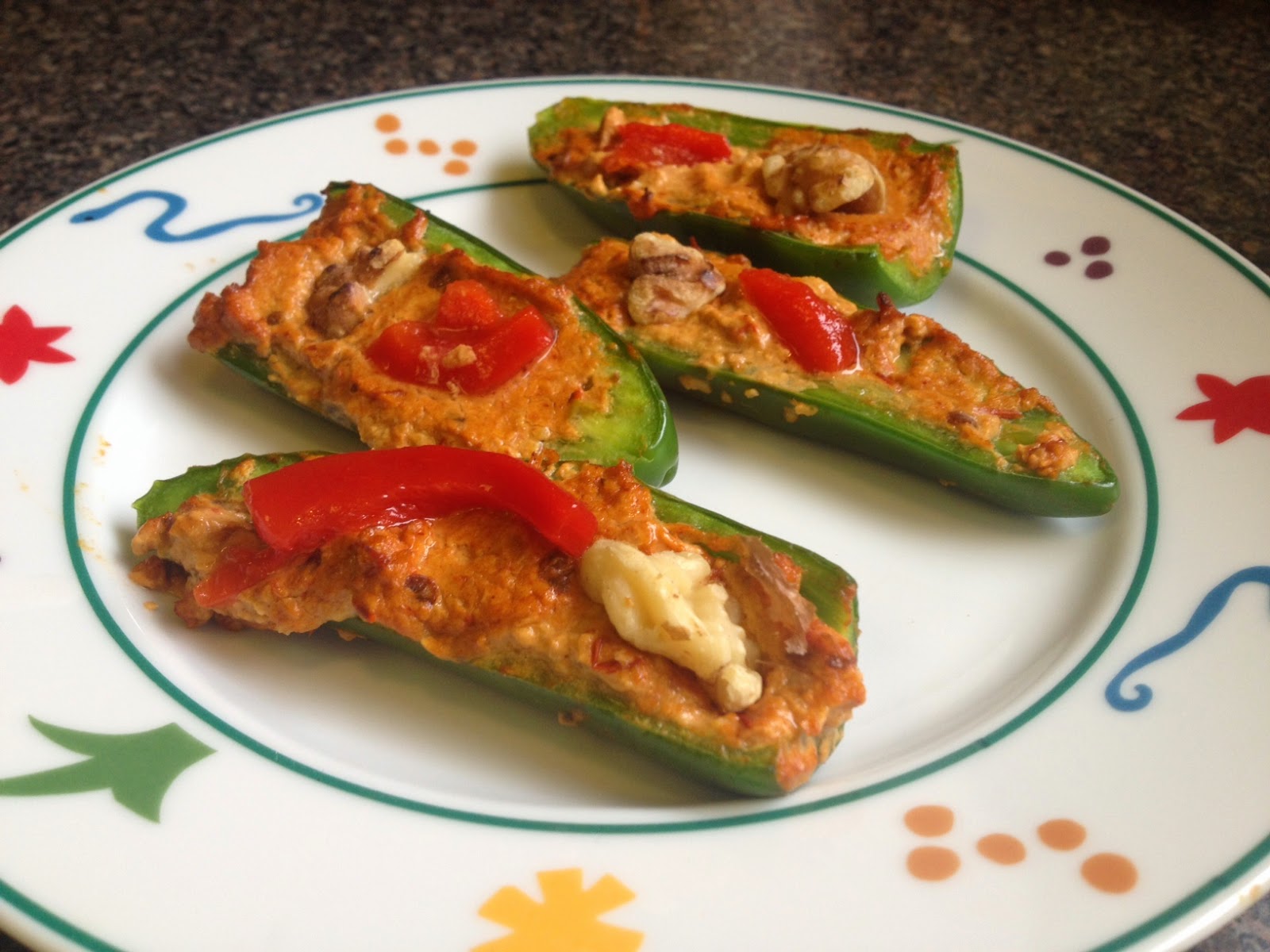 The cream cheese is mixed with minced red onion and chipotle to create a smoky, spicy stuffing for fresh jalapenos. Then it's baked and topped with walnuts (had some in my pantry!) and pimiento peppers (had to purchase those). These were a healthier change from the old battered and deep-fried cream cheese-stuffed poppers I used to eat in my pregan days.

One of my favorite things about John's book is that he offers three beer pairings for each recipe. The only style of beer that these two had in common for pairings was American Wheat Ale, which is basically the American twist on a German hefeweizen with less banana and clove and more citrus accents. I asked Midtown's best beer guy Taylor at the Cash Saver which American Wheat he'd suggest, and he picked the Sweetwater Waterkeeper Hefeweizen (Atlanta beer, represent!). I'm not typically the biggest hefeweizen fan, but this paired PERFECTLY! Because both dishes contained hot peppers, it was a fiery dinner, and the light, citrusy hefeweizen offered a nice relief. 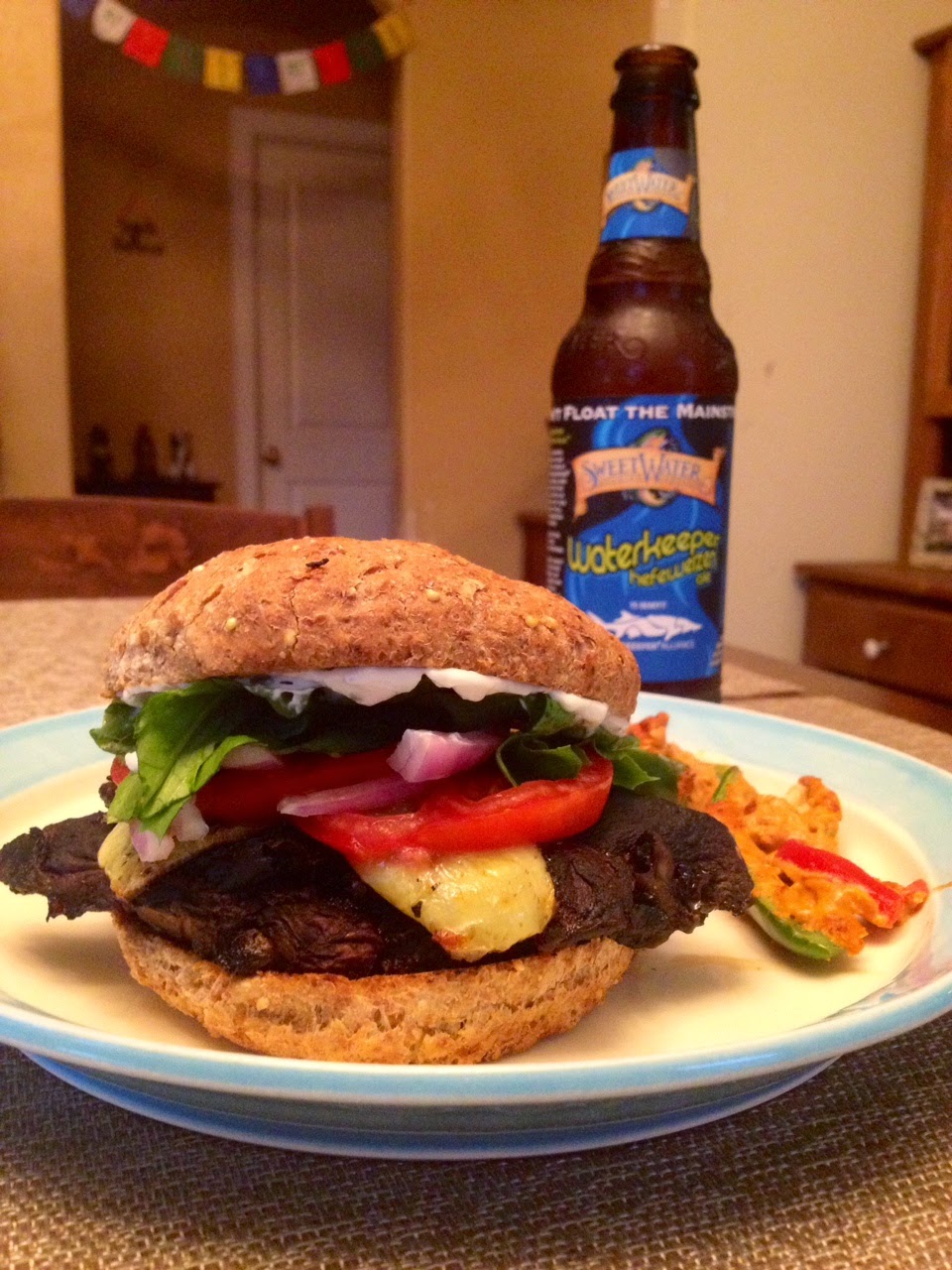 John's book also includes a ton of recipes for beer cocktails (Dive Bar Mimosa, Buzzy Navel, Brewdriver, etc.), beer chuggers (beer with shots ... think Irish Car Bomb but way more inventive), and beer party punches. I figured it wouldn't be fair to review the book and not try a drink, right? So I chose one that I already had the ingredients for — The Big O. 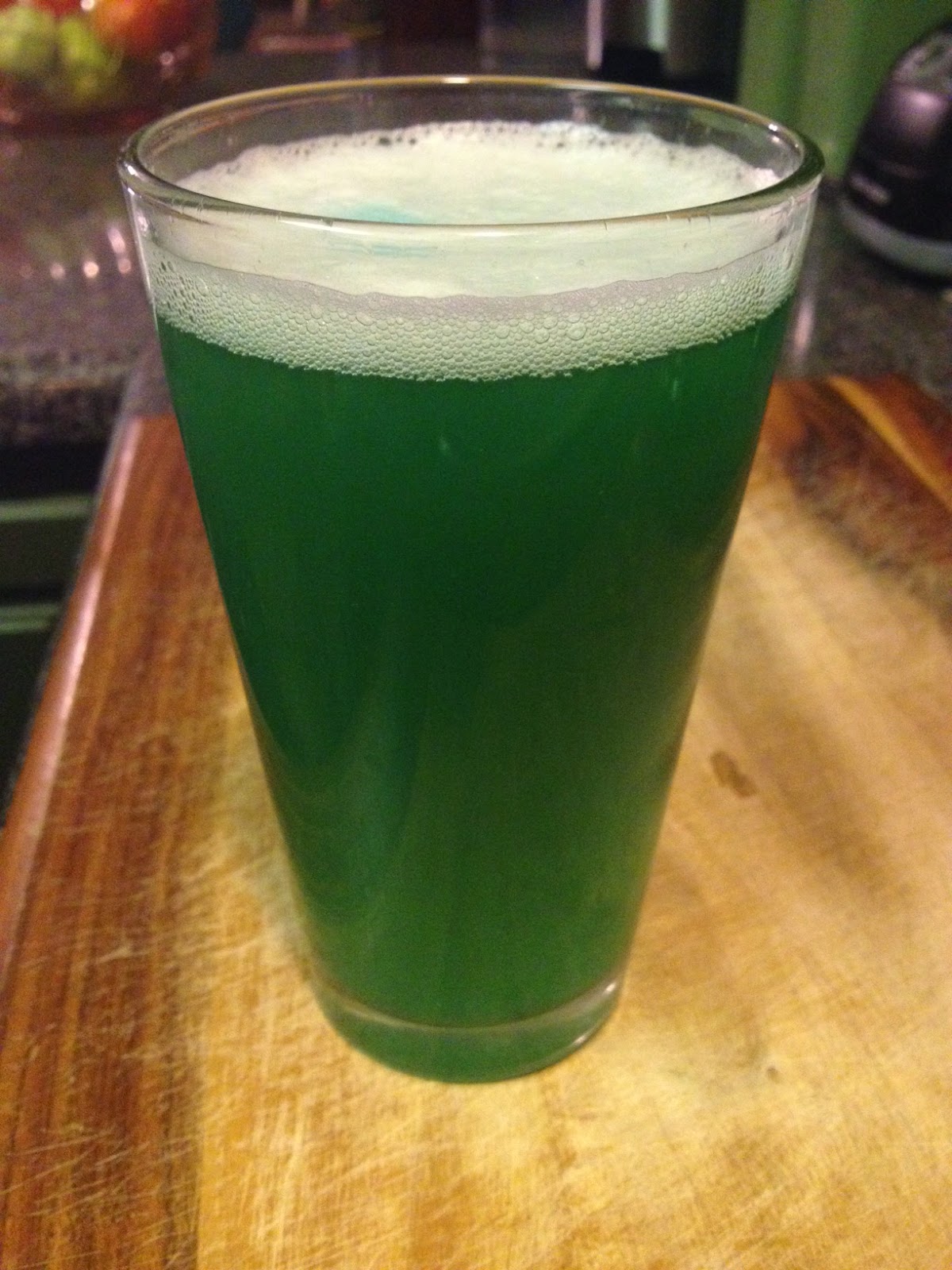 Okay, well, I had almost everything for this. The one thing that's missing is the orange slice garnish, and that would have made this green beer look more like it tasted. Despite its green hue, the drink tasted like fresh oranges, thanks to curacao (mine was blue!), fresh OJ, and citrusy hefeweizen. This was a refreshing summer cocktail, and it really took the hefeweizen to the next level.

Now for that giveaway: John's publisher is hosting a social media contest and blog tour, and Vegan Crunk has been selected as one of the stops on the tour. One Crunk reader will receive a free copy, but unlike my usual "just leave a comment" giveaway, this one requires a little more work.

Here's how it works: I've listed John's Party Salsa Bar recipes from his book below. Pick one, make it, take a photo, and then post it to the social media outlet of your choice (Instagram or Twitter) and tag the pic using the hashtag, #BeerLoversHH and tag me @biancaphillips. I'll select one winner from those tagged. You have until Saturday night to post, so get to makin' some salsa!

Combine all the ingredients in a medium-size bowl. Taste and adjust seasonings according to personal preference. Let the mixture sit for 1 hour before serving.


Black Bean & Corn Salsa
Earthy, sweet, and with a little sizzle, this black bean and corn salsa with bell peppers, red onion, and jalapeño is as eye-catching as it is full-on yummy. Add to that a pairing of Amber Lager, Maibock, or – to be really adventurous – Rauchbier, and you’ve got yourself a tasty conversation piece that will keep the party going all night long! Pair with: Amber Lager, Maibock, Rauchbier

Combine the black beans, corn, cilantro, peppers, onion, tomatoes, and jalapeño in a large bowl, mixing well. Drizzle the oil and lime juice over top, then add the salt and garlic powder. Stir. Refrigerate, covered, for 3 hours to overnight.


Fruit Salad Salsa
The beauty of this chunky fruit salad salsa is that it can be a totally new dish every time you make it if you mix up the fruit you use or choose fruit that is in season and available at your local farmers market or roadside stand. The fruity sweetness is balanced with a fresh jalapeno and green onions, and topped off with a complementary Fruit Beer, Kölsch, or American Wheat Ale. Pair with: Fruit Beer, Kölsch , American Wheat Ale

Combine all the ingredients in a large bowl, mixing well. Cover tightly and refrigerate for at least 30 minutes, or until ready to use (the sooner, the better).

I love John Sclimm too! This book sounds awesome. I don't think I;ll enter, just had to say that.
Beer rules.

I am not a fan of beer but surprisingly this cookbook sounds amazing to me! I think I would like beer a lot more when mixed with curacao and OJ or when served with poppers!

I am thinking of making salsa but it seems to me some of the recipes below are missing ingredients? If I am reading correctly the instructions mention ingredients that aren't listed.

That Fruit Salad Salsa sounds yummy! I mean, I love my tomato based salsas, but I'm almost on tomato overload after my garden over-produced them. Ha!

I just brewed a Belgian, too... I bet that pairing wouldn't be half bad with a peachy salsa.

Hey VeggieNextDoor, thanks for pointing that out. Totally my fault. I copied and pasted the recipes from a doc sent over by the publisher, and the ingredients were listed in columns. So the second columns accidentally got left out. I've made the corrections now!

Woo Hoo! I had all the ingredients on hand to make the Corn and Black Bean Salsa recipe. It's so yummy!! Here's my tweet: https://twitter.com/bankruptvegan/status/507266578602156032
I would love to win this cookbook for my husband. All of this food is right up his alley.