My Mofo theme is Pantry Raid, which means I'm trying to base my meals around items I already have in my pantry and freezer for the entire month of September. But that doesn't mean I'm going to stop dining out, so you'll still see my usual "stuff I ate" round-ups with meals from Imagine Vegan Cafe and other places (ha, like I eat anywhere else?!).

Also, as a disclaimer, many of the meals you're about to see were eaten before Mofo began since I tend to save these random shots for a couple weeks. Let's just go ahead and get Imagine meals out of the way first because you knew that was coming.

Last Saturday, Dana from Vanishing Veggie was in town shopping for a wedding dress. She lives (and blogs) in Little Rock, and I've seen her the past couple times I've driven down to visit Sheridan. But we'd never had a Memphis meet-up. She and her friends and mom were super-excited to try Imagine. Selfie! 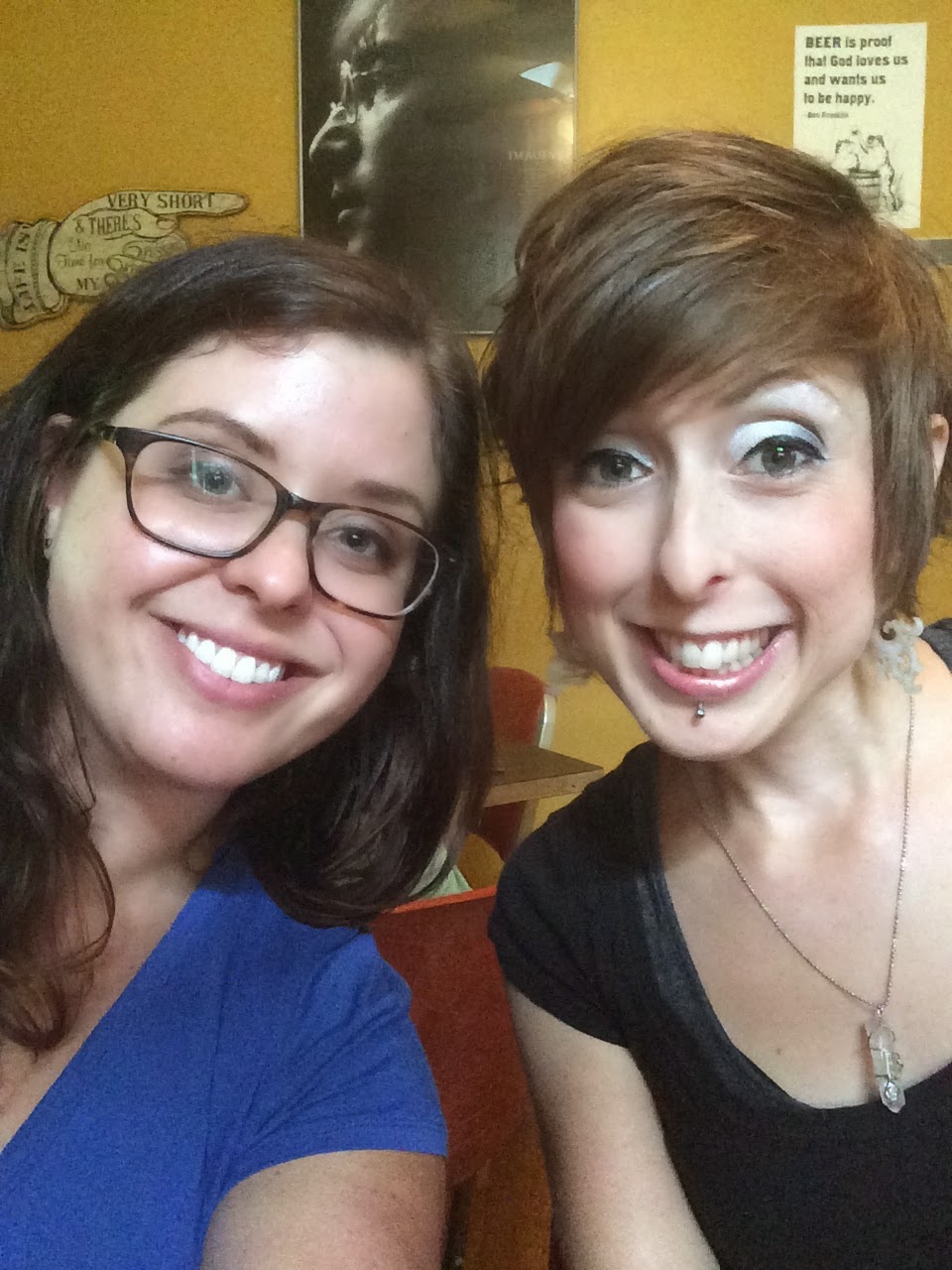 I'd been eating pretty badly for about a week prior to our meeting, so I opted for one of Imagine's healthier veggie-based dishes — Stuffed Bell Peppers with Vegan Beef, Rice, and Vegan Cheese, served with a side of Garlic Toast. 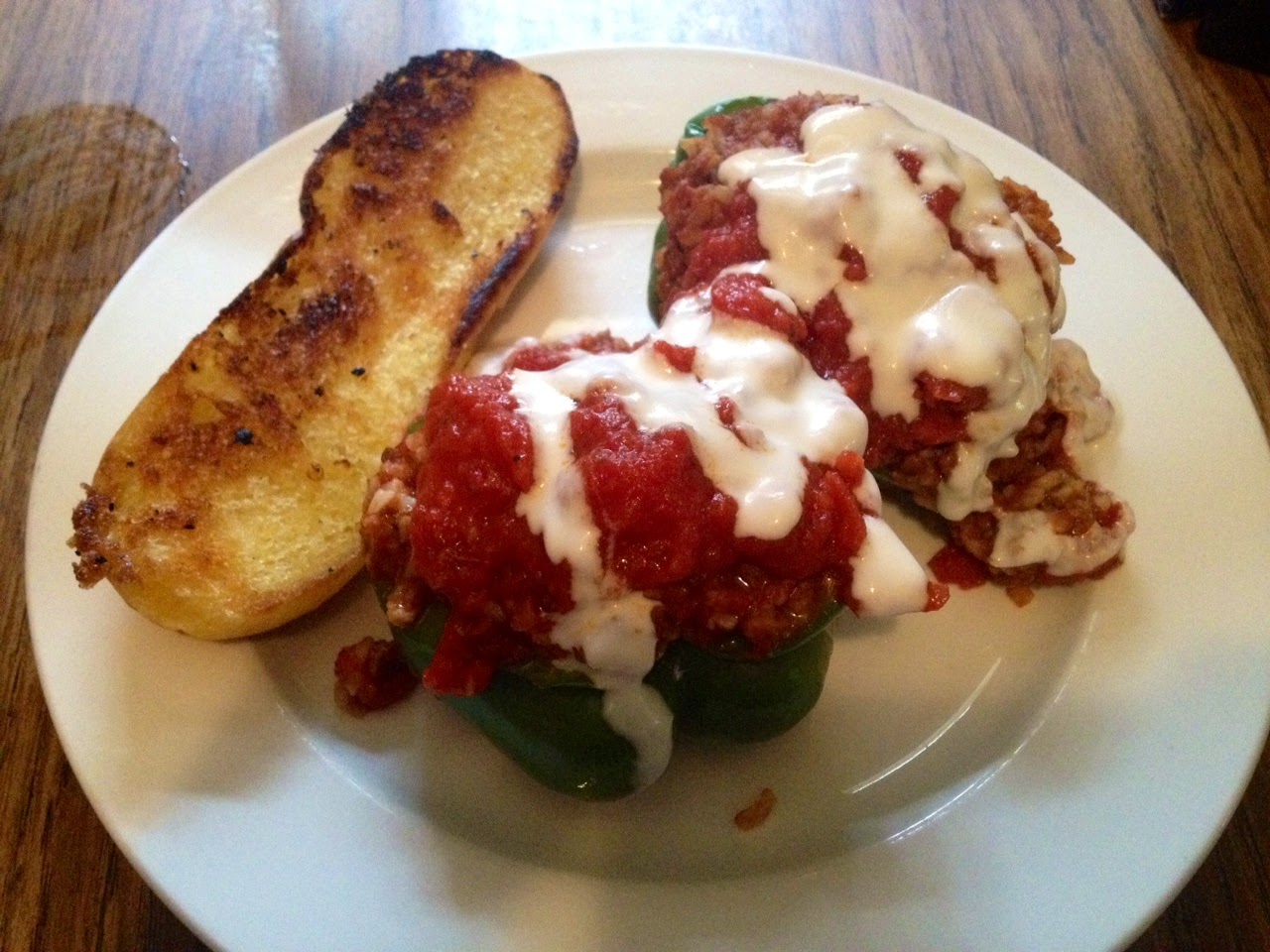 That was a nice healthy change from what I'd eaten at Imagine the Monday prior, when I attended a meet-up for a new vegan social group. It was the first meeting, but they plan to move it around to various vegan-friendly places each month. If you want more info on that group, check out the Meetup page. Anyway, that night, I ordered Imagine's Vegan Chicken and Cheese Nachos. Yum! 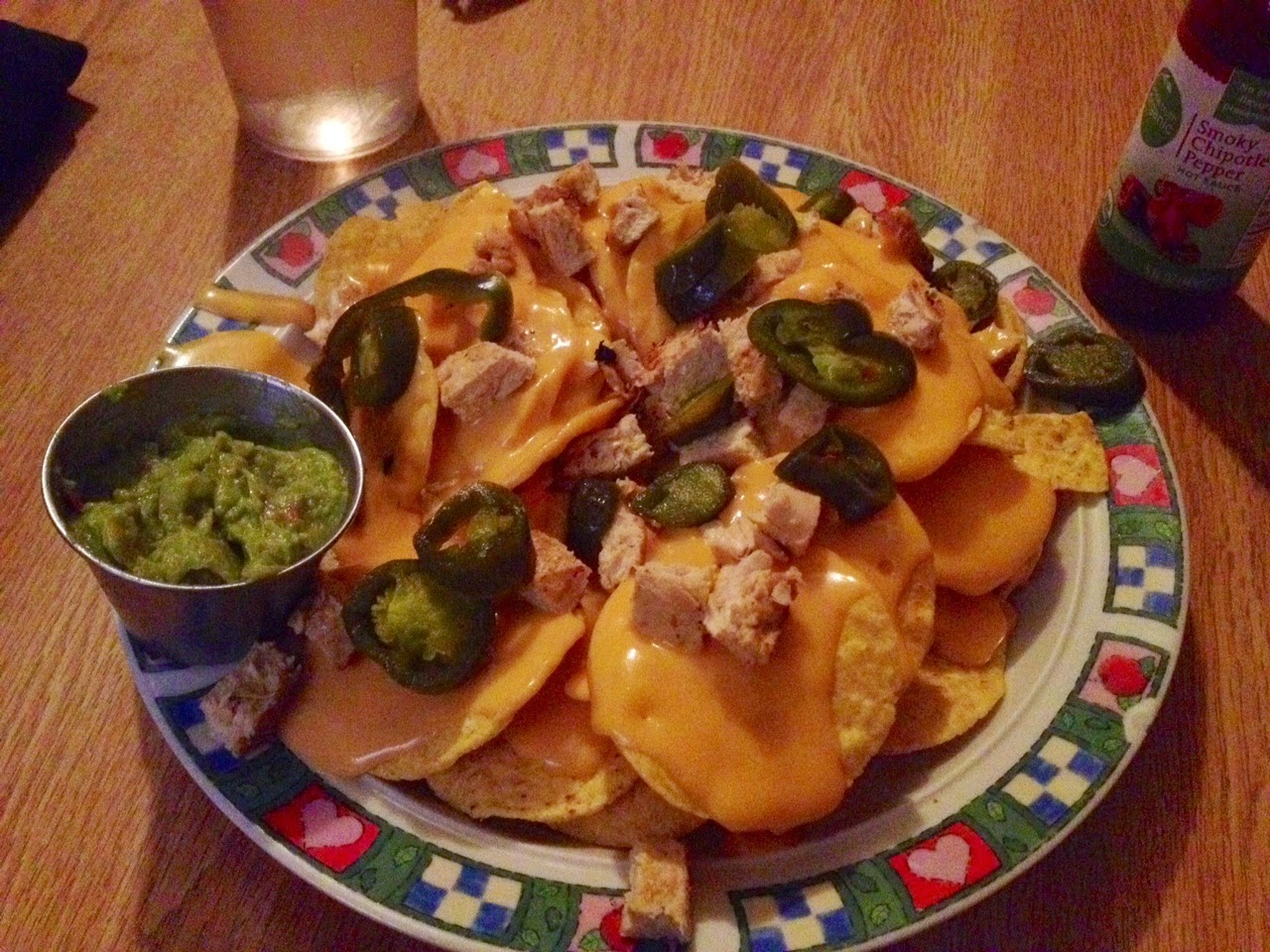 And the Sunday before that, I got this giant Waffle with Vegan Sausage at Imagine's brunch. 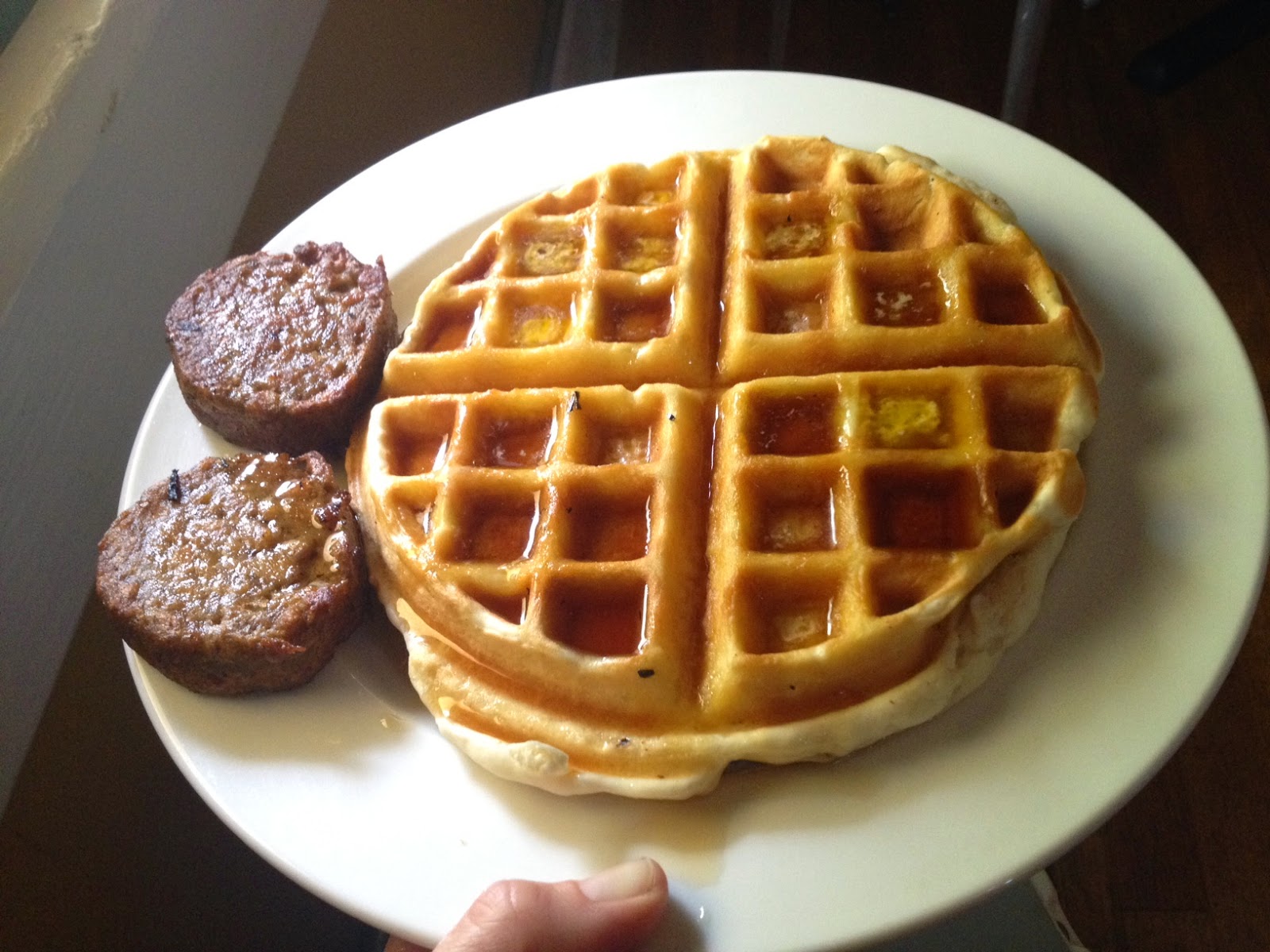 And I washed it down with a Mimosa! Imagine doesn't serve liquor, but on Sundays, they sell mixers and will spike them for free. 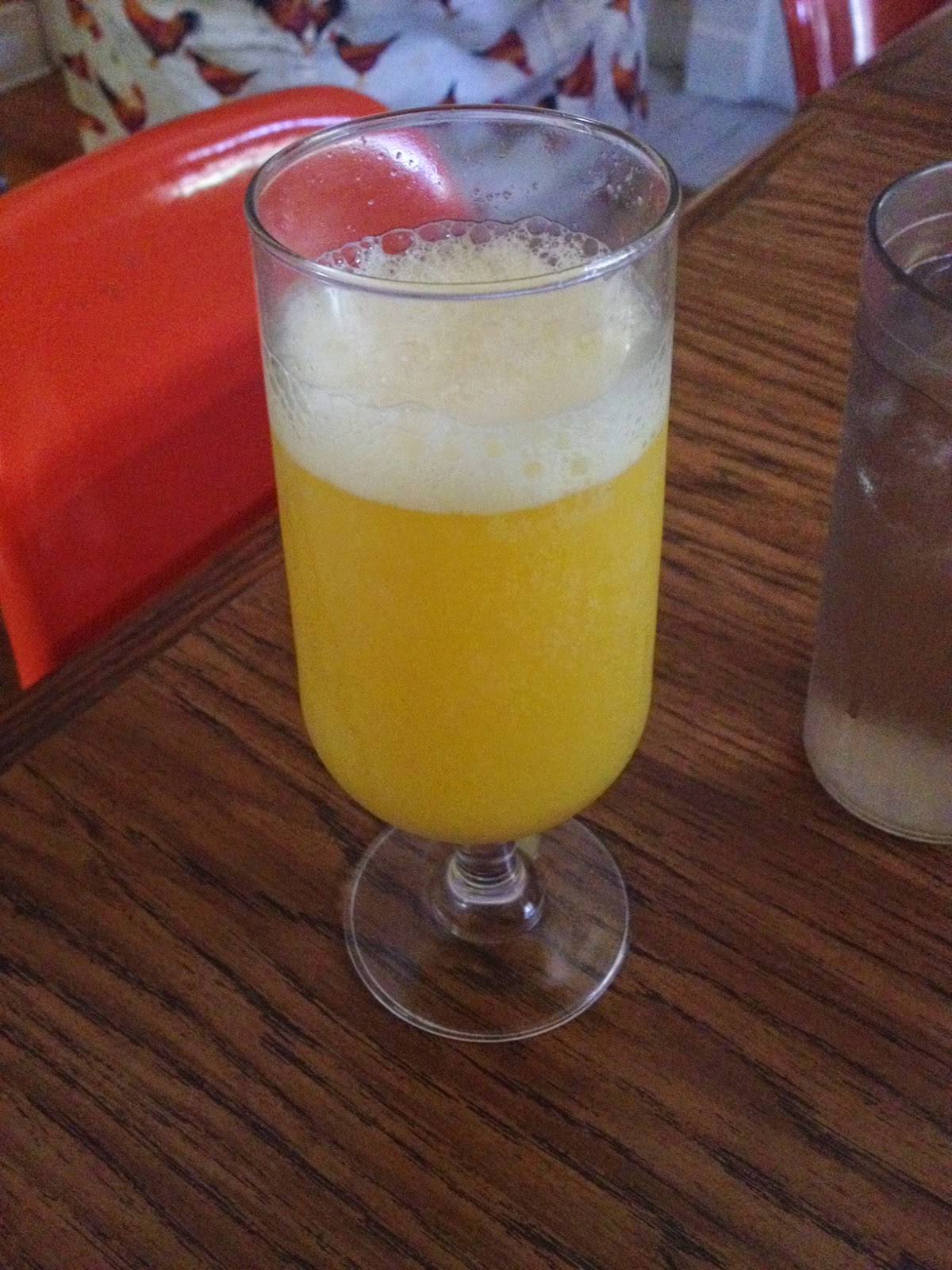 As for breakfasts at home, I've been having lots of smoothies and the occasional plate of Tofu Scramble with Toast and Pepper Jelly. 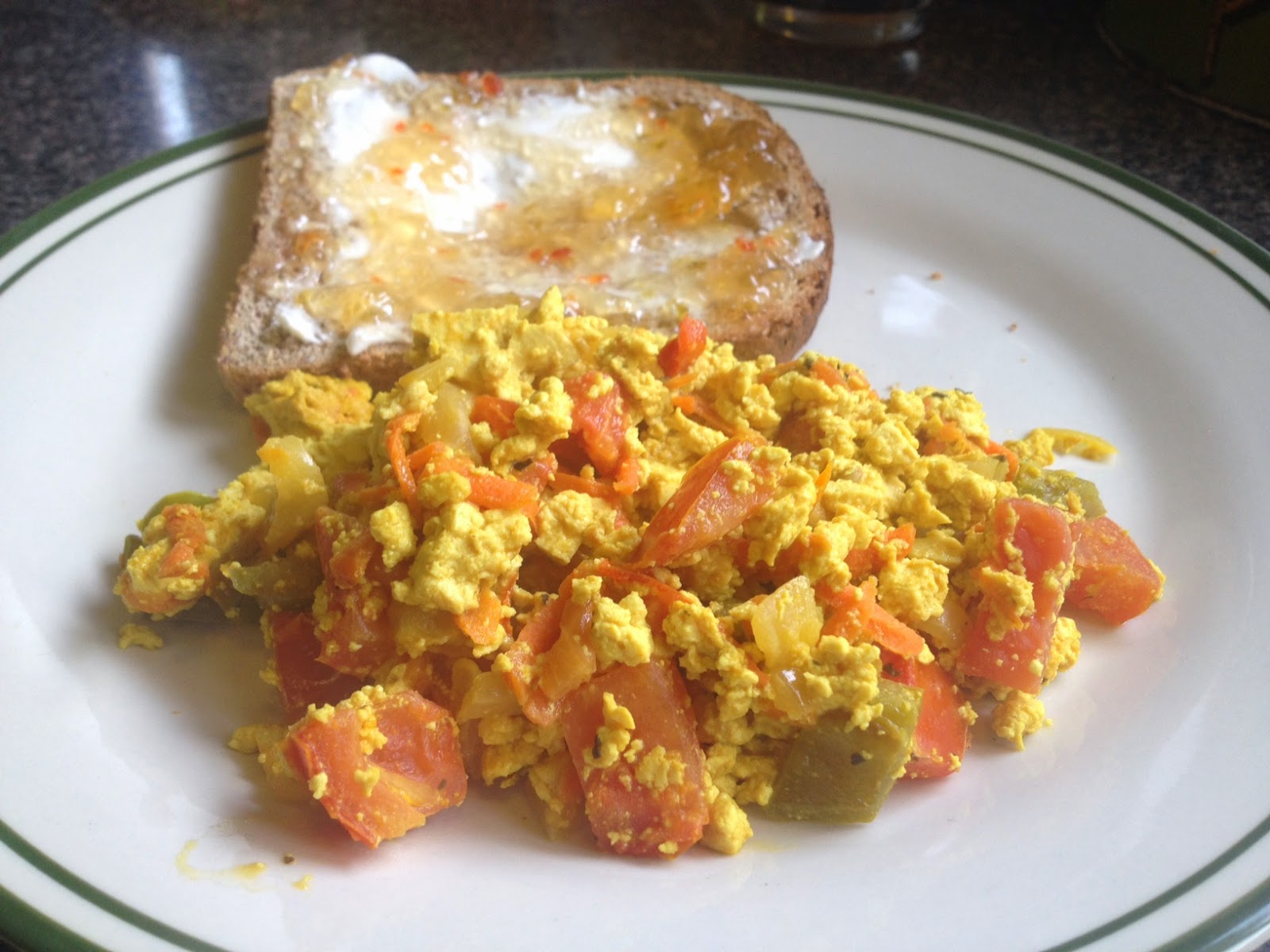 I eat much healthier at home, I swear. This week, I made two dishes from Paleo Vegan by Ellen Jaffe Jones and Alan Roettinger. Paleo Vegan is an uber-healthy book filled with veggie-based whole food dishes. It's all about balance, folks. Anyway, I made these Black Beans with Red Swiss Chard, a smoky dish accented by chipotle and smoked paprika. 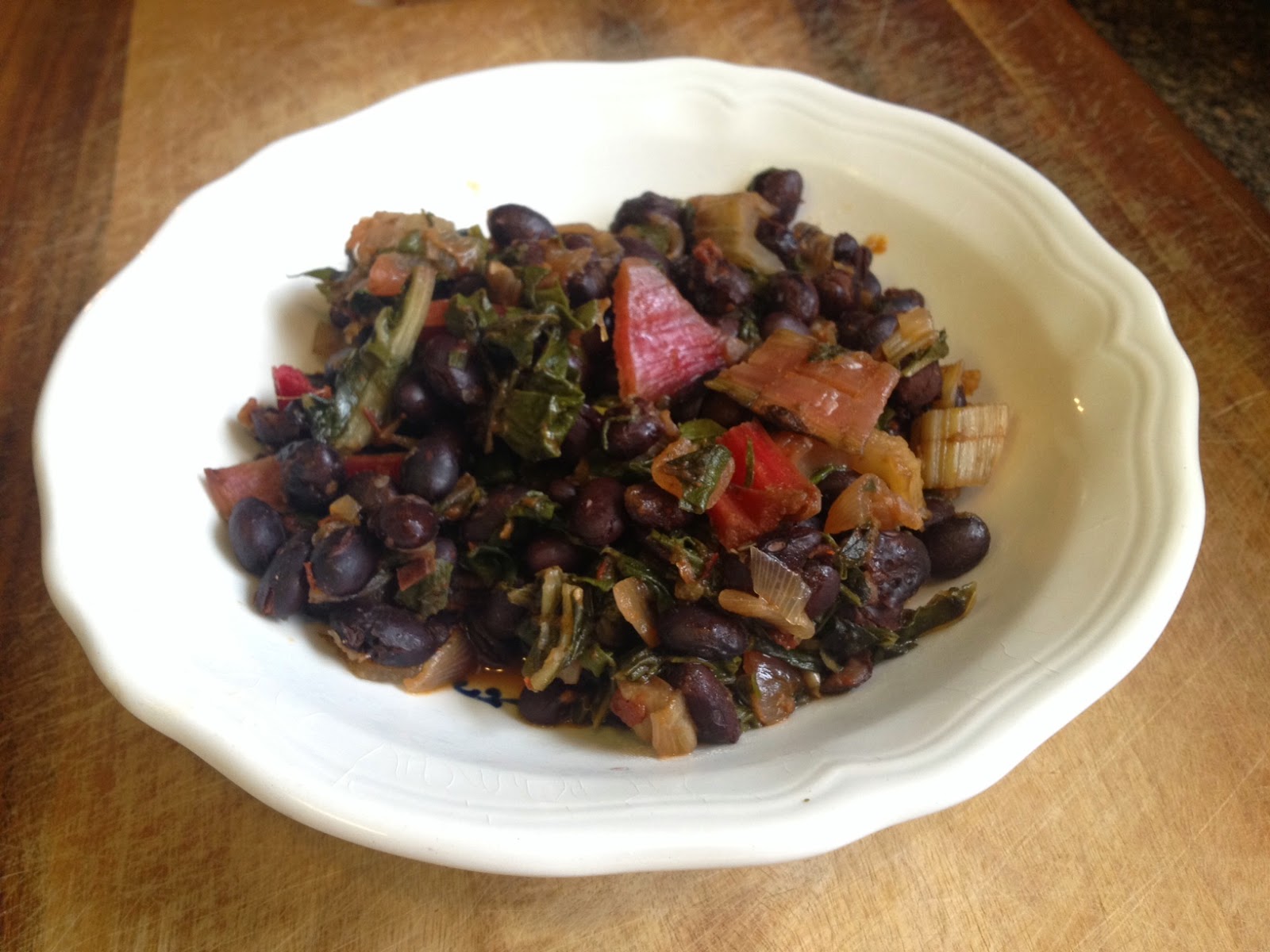 And I made the Quinoa with Leeks and White Truffle Oil from Paleo Vegan too. By the way, I've posted a full review of Paleo Vegan over on the Memphis Flyer Hungry Memphis blog. 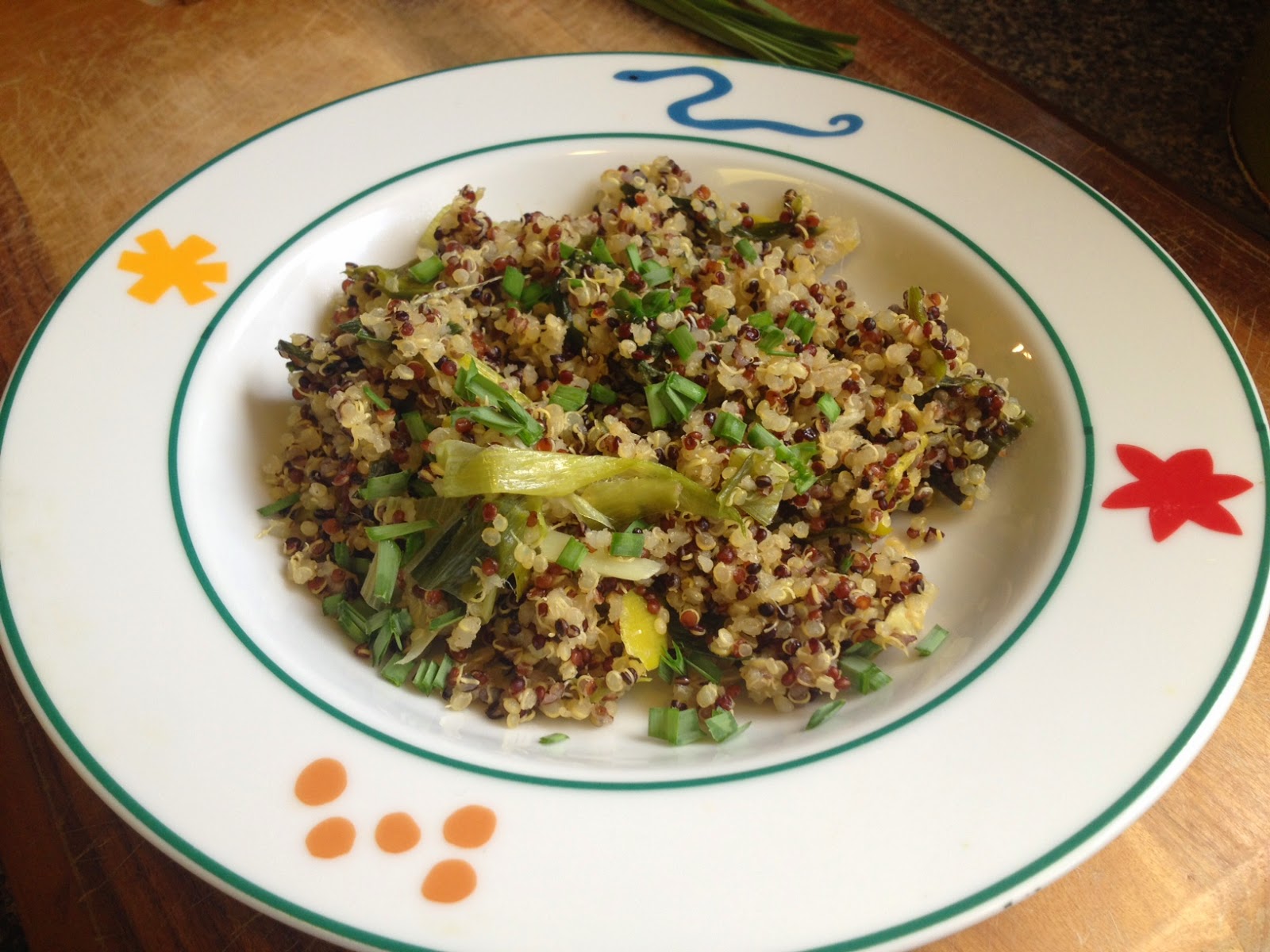 I went home this past weekend to visit my parents and let them meet their grand-squirrel Herman. My mom fixed some Boca Burgers with Sriracha Mayo and Pasta Salad with Avocado and Mango. Yum! By the way, my mom makes Boca burgers taste gourmet. For serious. I don't know what she does, but they're so much better when she makes 'em. 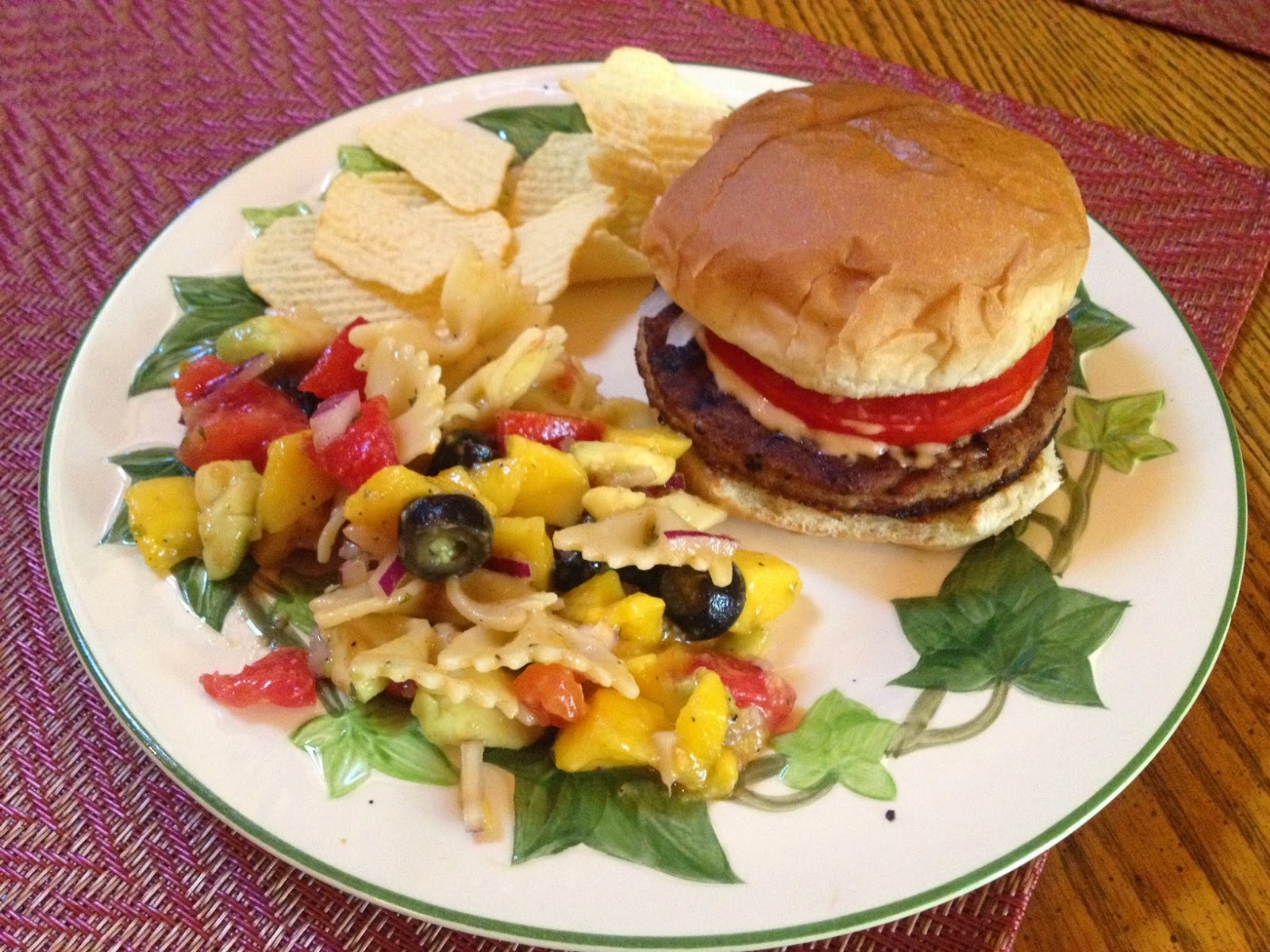 Speaking of my parents, my daddy surprised me with another order from Vegan Essentials. He loves to shop for vegan snacks and have them shipped to my office. And now, he's started to order a few things for himself too. He puts them all in one order, and I just give him his part when I see him. This time, he ordered Gone Nuts in Spicy Chipotle, Louisville Jerky Co. Sriracha Maple Jerky, Phoney Baloney Coconut Bacon, Dry Roasted Edamame, Sunbiotics Probiotics Cheesy Almonds, and a spicy Spacebar "meat" stick! 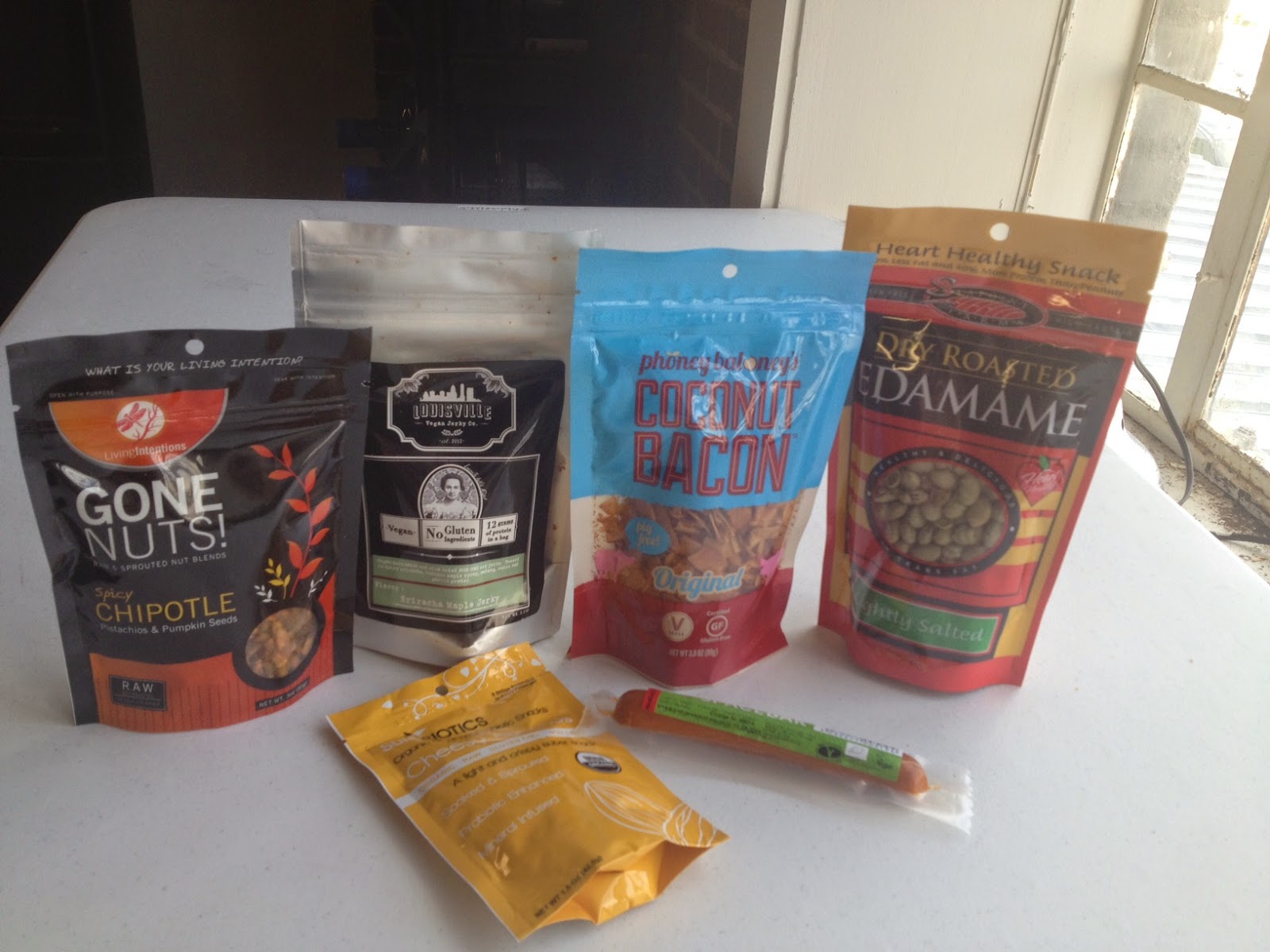 And that's not all! He also ordered Dang Toasted Coconut Chips in regular and sea salt caramel and Earth Balance Vegan Cheddar Squares! The plain Dangs and one of the edamames were for him. 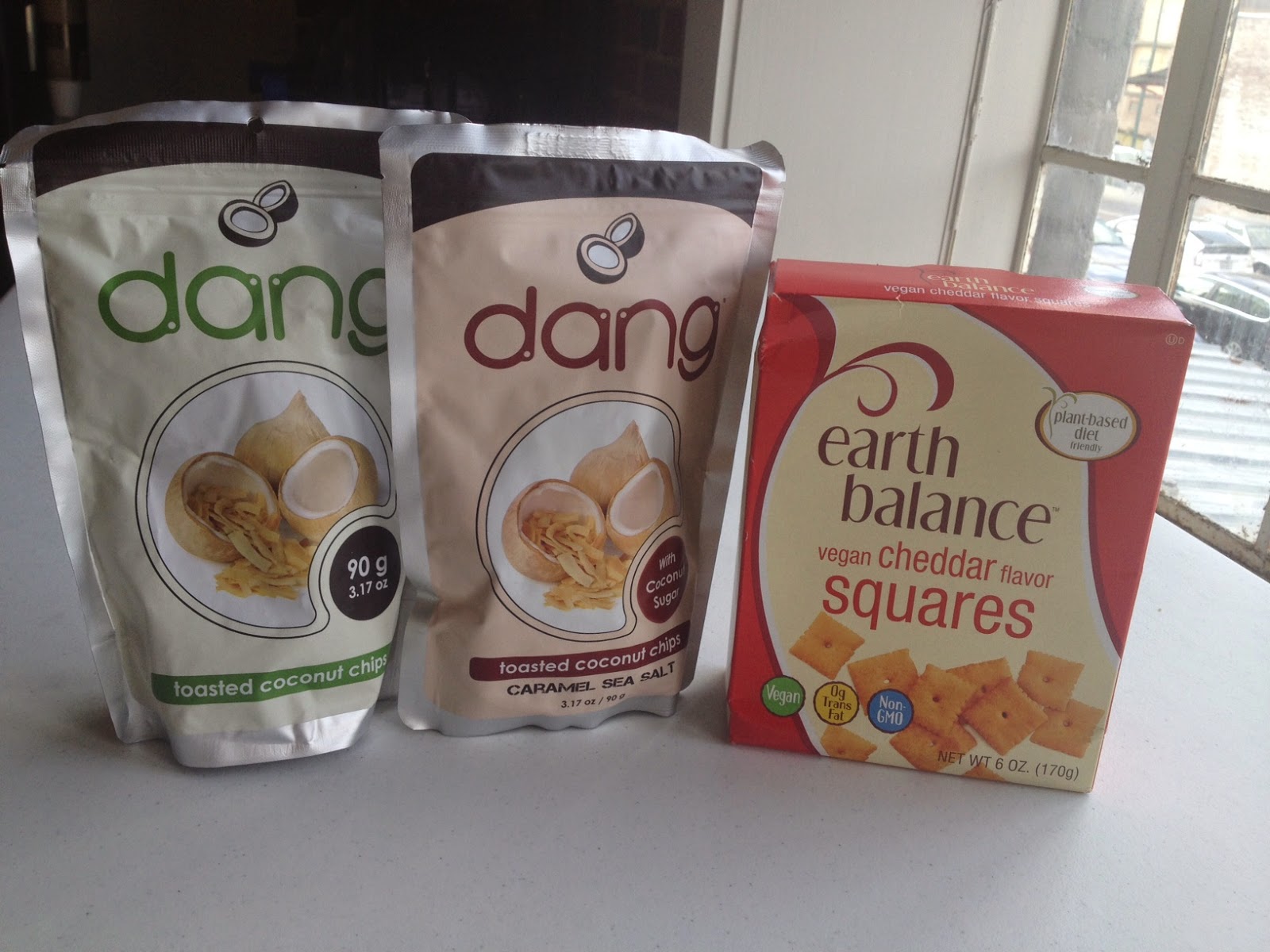 So I've been doing lots of snacking, mostly at my desk at work. Well, that's all for now. By the way, don't forget to check out my giveaway post for John Schlimm's Ultimate Beer Lover's Happy Hour Cookbook!
Posted by Bianca at 9:54 PM

So much good food. I would love to visit Imagine one day, it always looks amazing.

I love grand-squirrel. :) My parents have grand-cats. Was it a beautiful meeting?

Your dad really is the best.
The Imagine stuffed peppers look great! Do you know what kind of cheeze they use?

I love the Pantry Raid theme! I so need to do that once I'm back home. I always buy weird ass shit when traveling and then hoard it forever while I eat the same things I always eat over and over, oh well. Anyway, you've convinced me I might need to swing by Memphis on this road trip. Nachos are my favorite food.

Dry Roasted Edamame...must get me some of that! Many thanks!

What a great dad! And OMFG I missed the original post about the squirrel so had to go back and see... and sooo cute! Love!

I really just can't believe all the awesomeness that comes out of Imagine. Must be nice to have them nearby. Wild Cow is great, but a total pain in the ass to get to (and park).

I need to visit Imagine one day!! Everything you post from there always looks perfect.

Yay vegan meet up!! I was SO excited to try everything. I may have eaten both of my slices of birthday cake when I got home. It was great to see you!

Yeah, it's all about balance, but I'm certainly glad, and terribly sad, I don't have an Imagine Café in my town... I think I'd forget everything about balance.

Those space meat bars are the best.