All Hail the Vegan Taco!

I get a lot of vegan cookbooks for review in my mailbox. And I love most all of them. But there are a few that just blow me away. Such was the case with Vegan Tacos: Authentic & Inspired Recipes for Mexico's Favorite Street Food by Jason Wyrick. 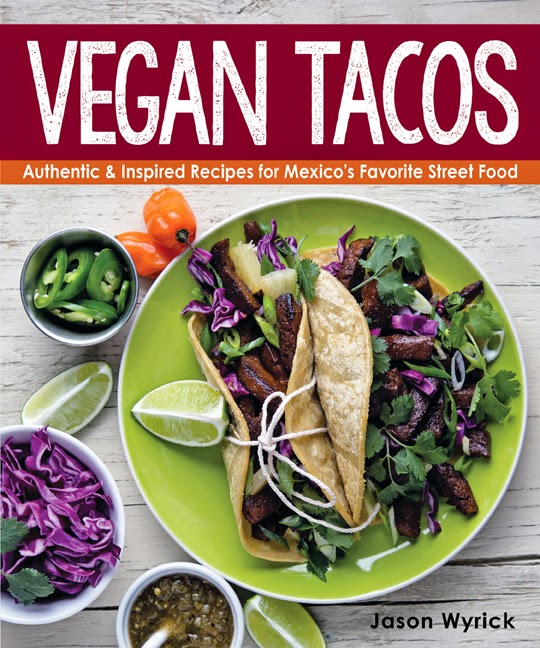 Maybe it's just because I freaking love tacos. Maybe it's the gorgeous full-color pics. Or maybe it's all of that, plus the amazing amount of time and research that I'm certain went into writing this taco tome. Not only does Wyrick give us recipe after recipe for mouth-watering vegan tacos, he also gives us a taco history lesson in his Tacos 101 section. He tells us the proper way to eat a taco. He tells us about nixtamalization, the process of soaking and boiling dried corn in an alkaline solution, creating the base for tortilla dough. He even tells us about how Glen Bell, the founder of Taco Bell, invented the hard shell. Who knew?

Love a good history lesson with my meal. But most importantly, I love my meal. And Vegan Tacos has you covered with a ton of recipes — veggie tacos, plant meat tacos, tempeh tacos, bean tacos, guacamole tacos, breakfast tacos, the list goes on. After much deliberation, I finally settled on Tacos with Hot Dogs in Tomato Salsa. 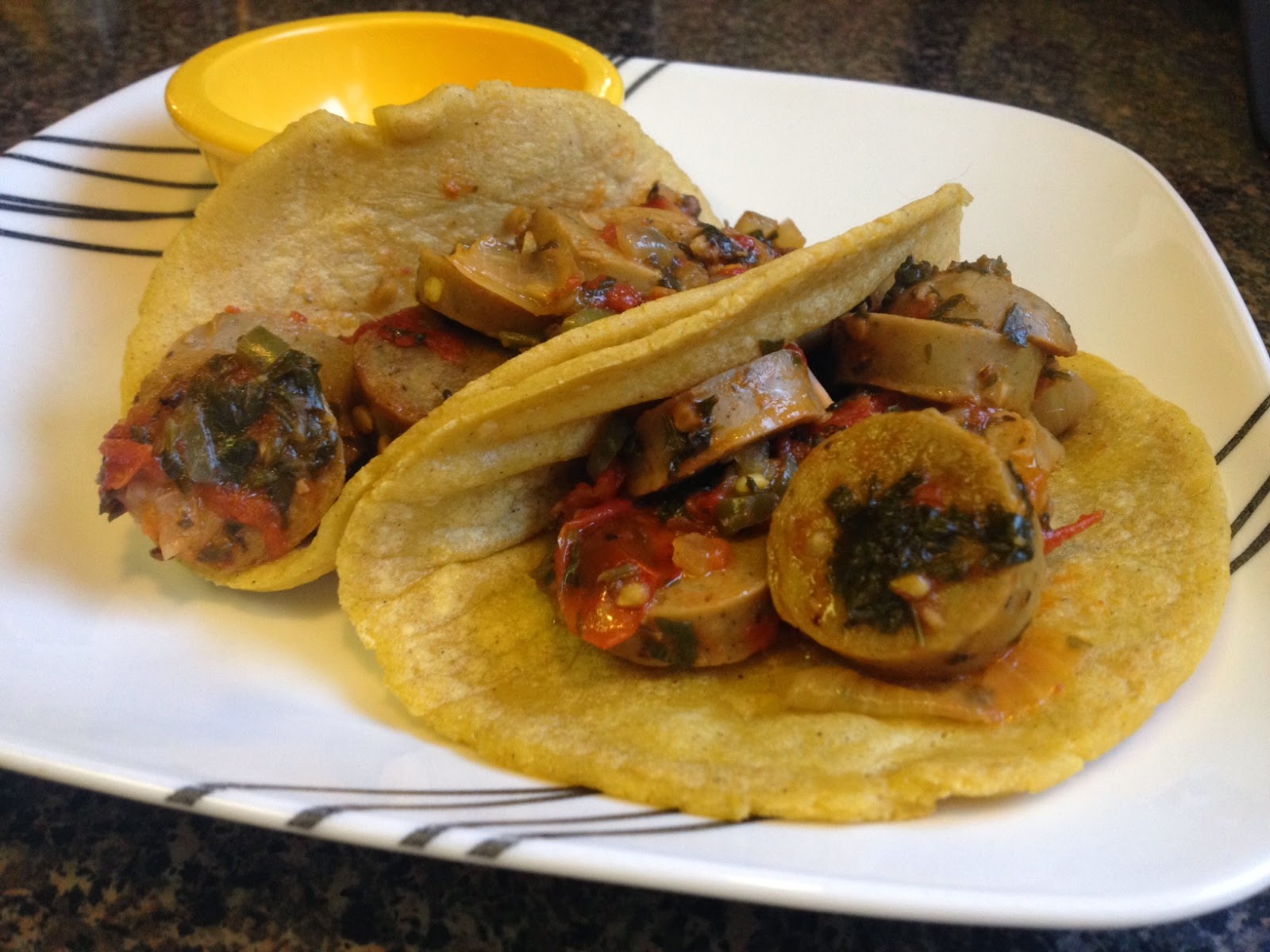 Yes, that's right. I poured through pages of fancy tacos — some made with smoked or roasted veggies, others with super-gourmet preparations — and I settled on the hot dog taco. I'm sure that says something about me. But I don't care because these were delicious!

According to the recipe intro, hot dog tacos are a thing in Mexico City, and even though Jason makes a little fun of the idea, he admits these are to die for. Tofurky Beer Brats are simmered in dark ale and then cooked with fresh tomatoes, onion, and cilantro. Stuff the filling into a tortilla and add a squeeze of lime and hot sauce. Food of the vegan gods. 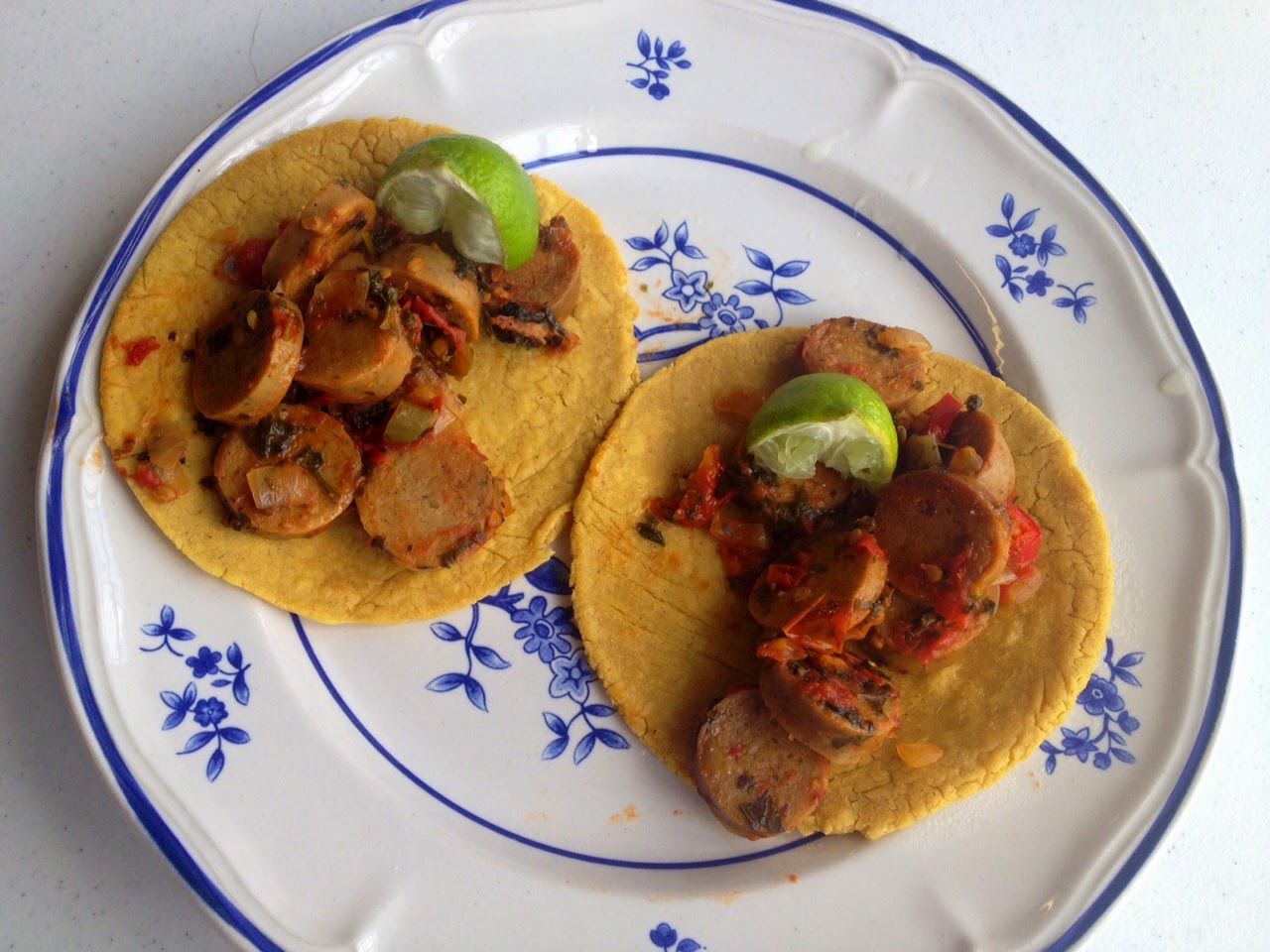 Now about those tortillas, the book includes several recipes for making your own corn, wheat flour, or hard shells. In keeping with my Mofo Pantry Raid theme, I opted to make corn tortillas with the giant bag of masa harina that had been hanging out in my pantry for a couple years. But I opened up that bag, and yuck! Bugs! This is why you shouldn't hoard food. I used to keep masa in the fridge to prevent bugs, but my fridge just got too full. Yes, I know I have a problem.

Anyway, lucky for me, I live about two blocks from an international food market. So I ran down and got a new bag of masa. Then I set out to making dough and pressing tortillas. The book recommends using a tortilla press to flatten the balls of dough, but I didn't want to buy a new piece of kitchen equipment. So I laid out some parchment paper, set the dough balls on top, covered them in plastic wrap, and pressed down on each one with my heavy cast iron skillet. Boom.

Here they are cooking on a griddle. 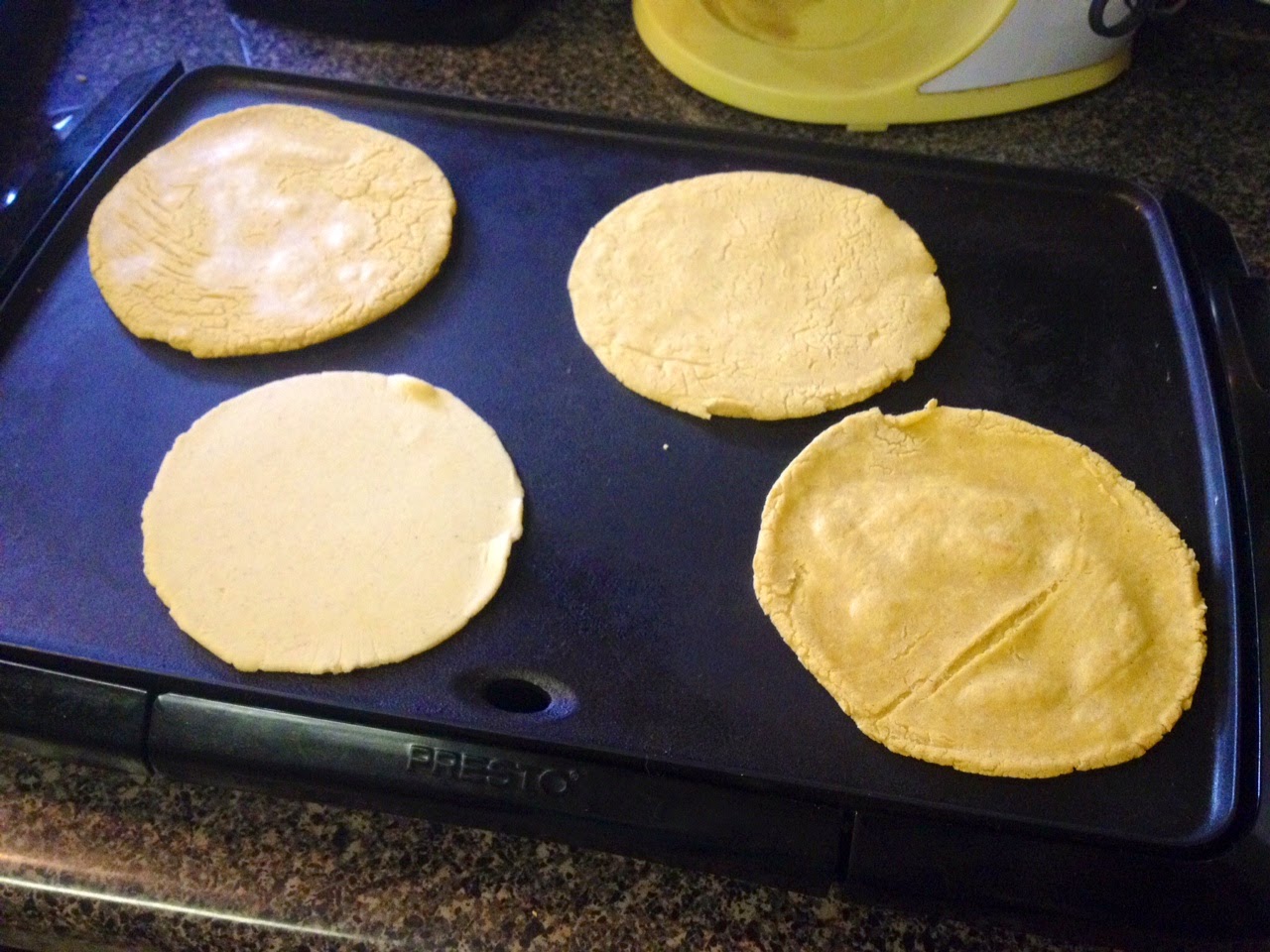 And here they are stacked and ready to fill. These were so soft and fresh-tasting. Not at all like packaged corn tortillas. And since they were such a cinch to make, I think I'll start making them fresh every time. 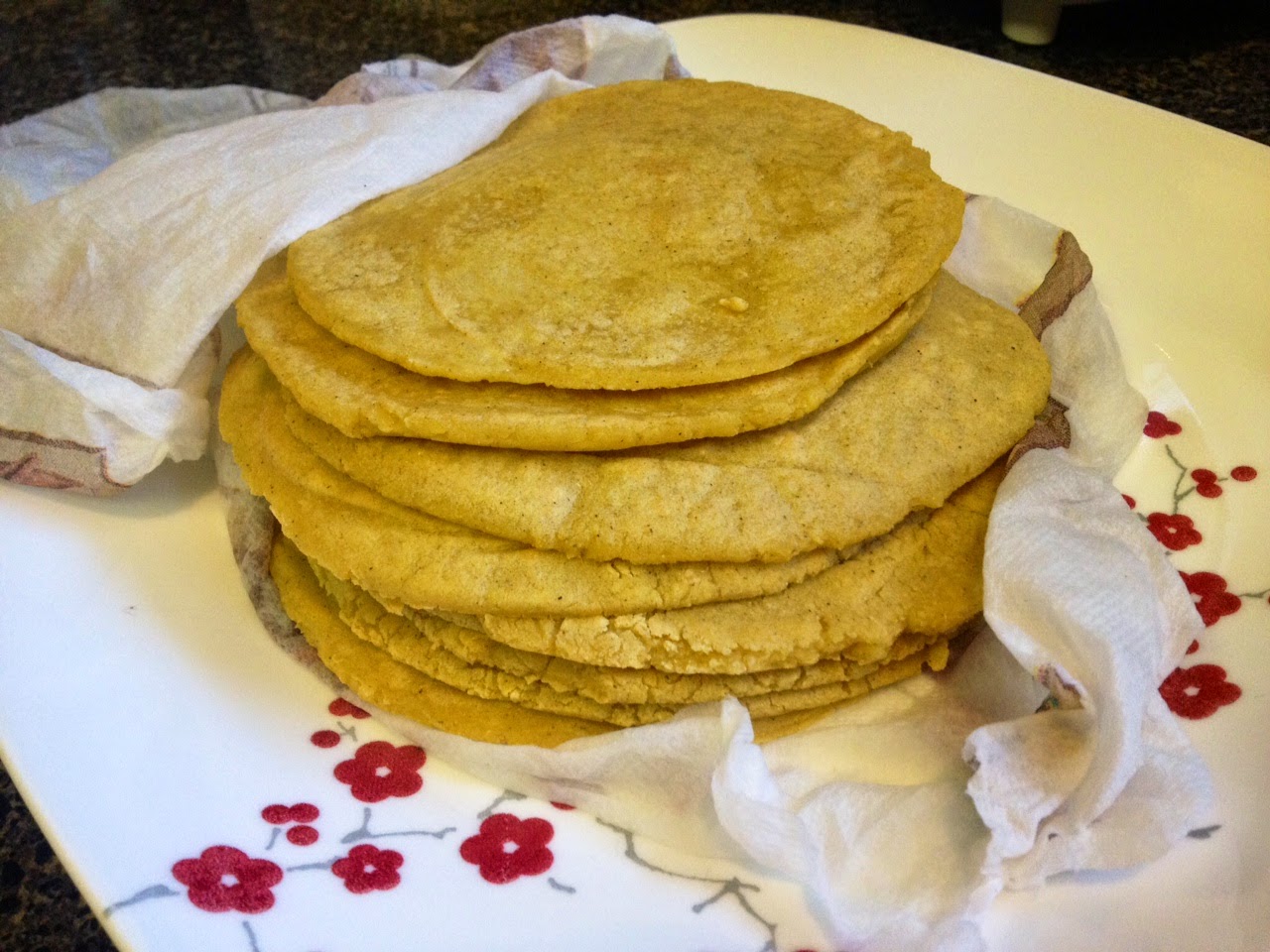 As for the rest of the book, let me just list a few recipes that caught my eye.
* Baja Style Tacos with Lobster Mushrooms
* Tacos Dorados with Plantains, Black Beans & Roasted Garlic (these are fried after they're filled!)
* Basket Tacos with Chipotle Coconut Beans
* Hash Brown and Black Bean Tacos with Tomatillo Avocado Salsa
* Tacos with Crispy Greens (these are filled with Swiss chard tempura!)
* Hominy & Seitan Tacos in Roasted Garlic Cascabel Sauce (cascabel is a chili pepper)

And there are even dessert tacos! The Sweet Crispy Tacos with Ancho-Vanilla Ice Cream, Mexican Chocolate, and Salted Peanuts sound divine.

There will definitely be future taco nights in my life, and Vegan Tacos will be my new go-to guide.
Posted by Bianca at 10:14 PM

Using the skillet as a press is a brilliant idea! I've been using (and failing) using a rolling pin. I'm gonna try this next time, thanks!

I keep seeing this book around and it looks so amazing, I love tacos! I love that he's covered a bit of taco history, too-that's so cool!

I told myself I wasn't going to buy any more cookbooks this year but this one might make me break that resolution.

The only two words I needed to hear were "dessert tacos". I'M SOLD.

since getting this book last week i have been on a taco kick. so far my fave is the vampire tacos.

It definitely is funny that you chose the hot dog tacos, but they kinda look good. =)

Anyhow, I thought I was pretty much all set with cookbooks, but the way you talk about this one makes me reconsider things. The research and history part of the book seems right up my alley.

Oh, and my masa harina has been out there for a year or two too. I'll make sure to take a look inside soon. Great tip for the parchment paper + cast-iron. I'll use that next time.

You're brilliant! I've been on the fence about buying a tortilla press but the room/ cost has been an issue however I have a ton od cast iron(pretty much all we use) so thank for sharing this!!! The book looks great!

You had me at "dessert tacos." YUM! I've been hearing a lot about this cookbook around the interwebs. I'm gonna have to pick up a copy for myself.