If I didn't have you at mofo or VVC, I bet I had you at "baby squirrel." And there will be a baby squirrel in this post, but you'll have to wait for a few announcements.

1. It's Vegan Mofo 2014, y'all!
It's hard to believe that the Vegan Month of Food (MOFO) is here again. Didn't we just do that? Time really flies when you're gettin' old. But in case you're new to the vegan blogosphere, Mofo is the month when every vegan blogger comes out of the woodworks and vows to blog more often and typically with a fun theme for the month. Some of us, like myself, have been blogging all year, and Mofo is just business as usual.

But some of my favorite bloggers only get super-serious about blogging around this time, so I love catching up on what they've been doing all year. You can find round-ups everyday on the Vegan Mofo website.

And after years and years of participating in Mofo without a theme, I've finally decided to commit to one this year. My theme is Pantry Raid! (Get it, like "panty raid" but with "pantry." Ahem.) My pantry (and freezer) are out of control again because I'm a food hoarder who can't turn down a Kroger Manager's Special. So every dish I make at home this month will be centered around ingredients I already have. I'm allowed to buy fresh produce and the occasional supplemental ingredients, but the base of the recipe must come from things I already have.

2. I'm speaking at Vida Vegan Con 3!
I'm super thrilled and honored to have been chosen to speak at VVC again this year. Somehow, I've been lucky enough to speak at the past two cons, and I figured they'd be sick of me by now. But nope! I guess not! Yay! I was gonna go anyway because I wouldn't miss it for the world, but I'm so excited to be speaking. 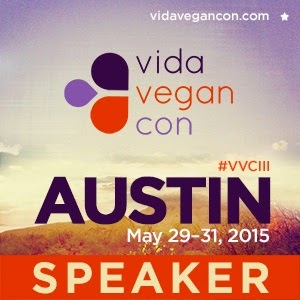 I'll be leading a talk (or maybe a panel?) on the Ethics of Vegan Dining and Boozing. We'll be discussing how we each handle sticky situations in non-vegan restaurants. Do you ask lots of questions? Are you more concerned about being an easy-going vegan and not asking questions? Do you worry about whether or not your wine is vegan? Do you tell someone at the table when they accidentally order something not vegan?

The conference is in Austin from May 29th-31st. And I'm super excited that my BFF Sheridan and her partner Drew are coming this year! Vegan breakfast tacos, here we come! If you need tickets for VVC, go here.

3. And now the moment you've all been waiting for. 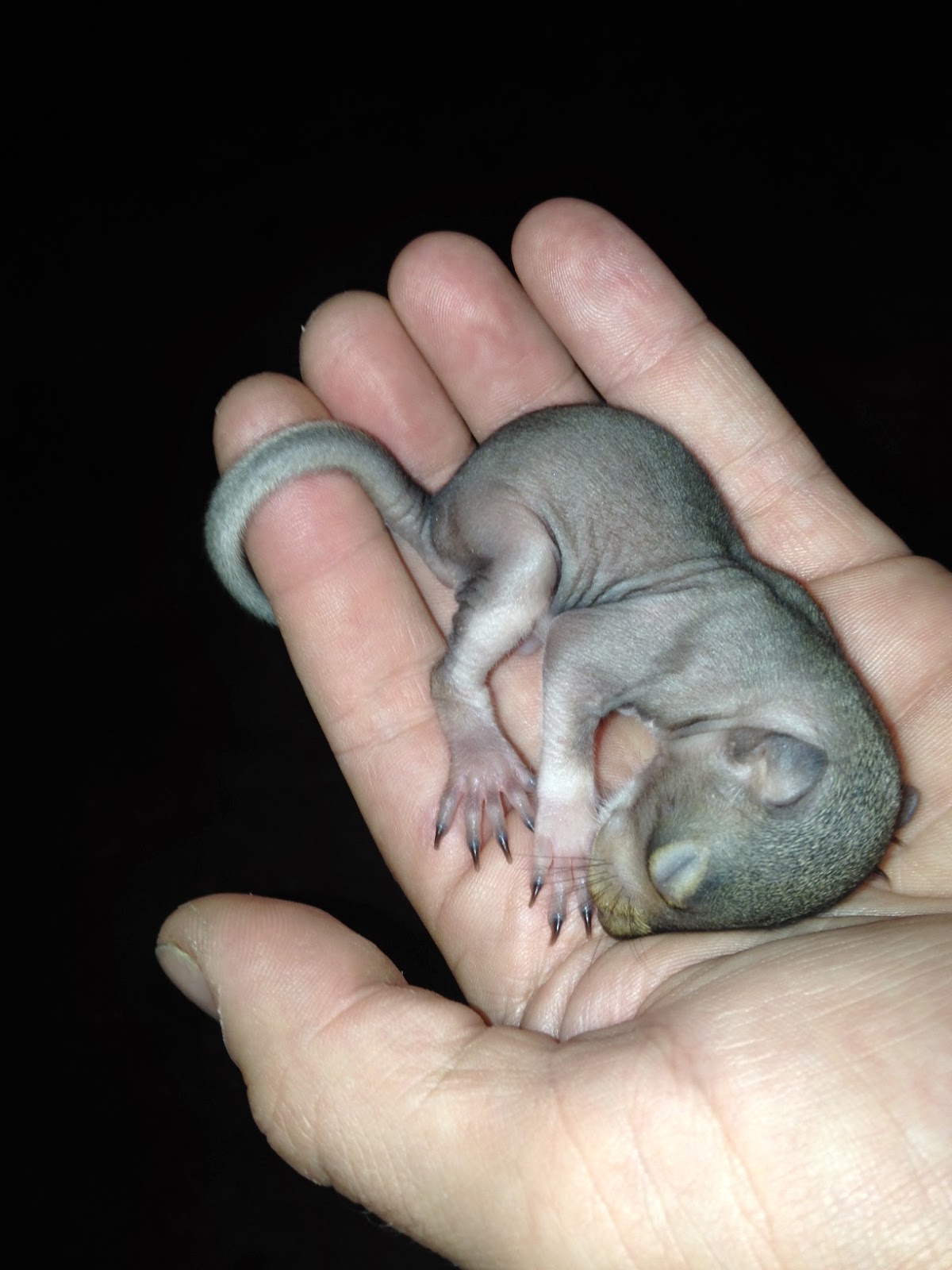 That, my friends, is Baby Herman. A few weeks ago, Paul let the dogs out in the backyard and heard a loud screaming sound. He went outside and Maynard, our pittie, was playing with a tiny baby squirrel and most likely about to make that baby a snack. The baby was screaming for help! Paul scooped him up and took him inside. We never saw a nest or a mama squirrel, so we took the little guy in. I googled "how to take care of an orphaned baby squirrel" and got some good tips. He loves puppy formula. Here he is in the first week or so. Look how tiny and wrinkly! 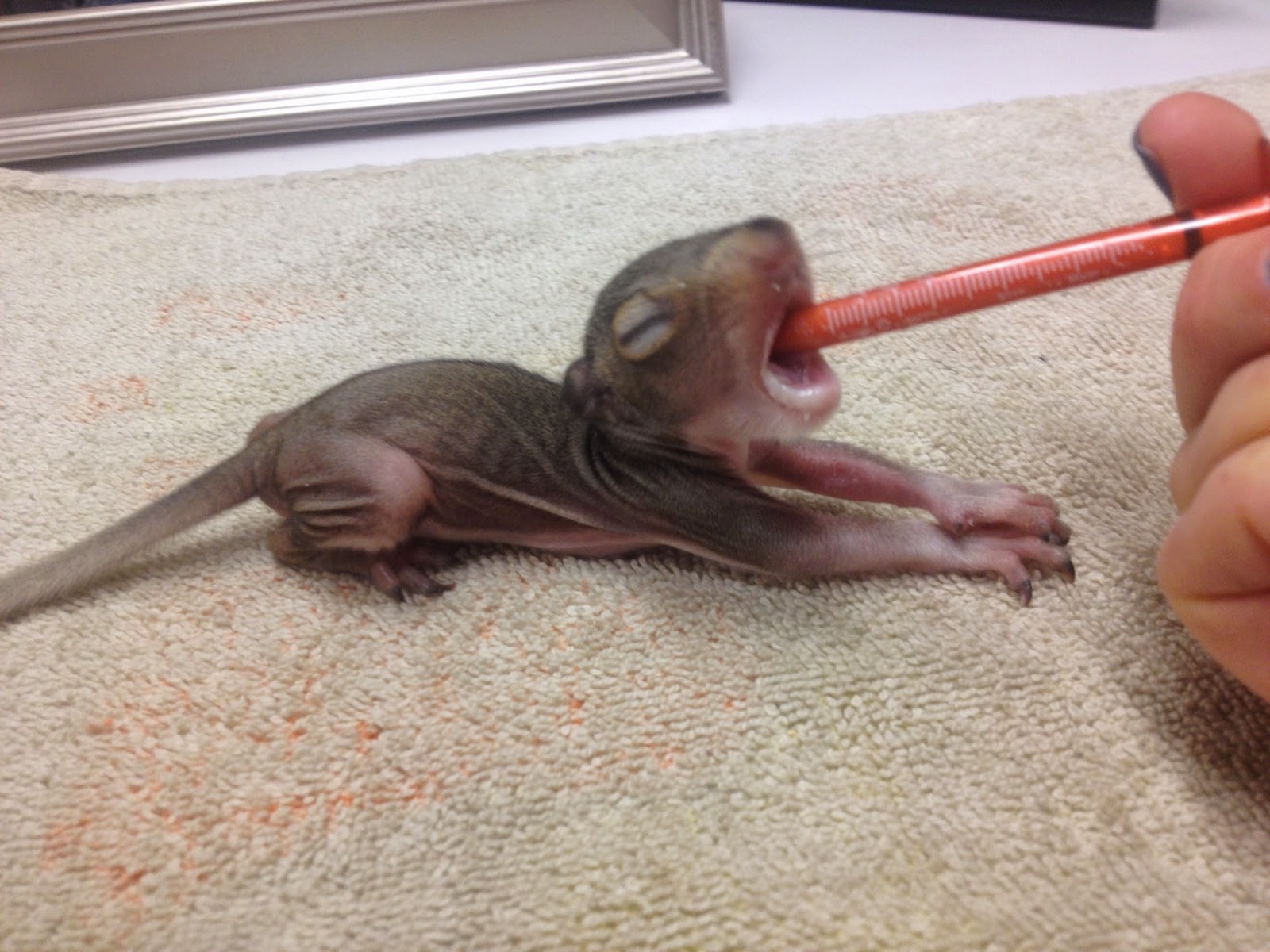 It's been about 4 weeks now. Herman's eyes are open, and he's getting way more active. He's such a crazy little guy! This morning, he discovered that my pants are basically the same as trees. 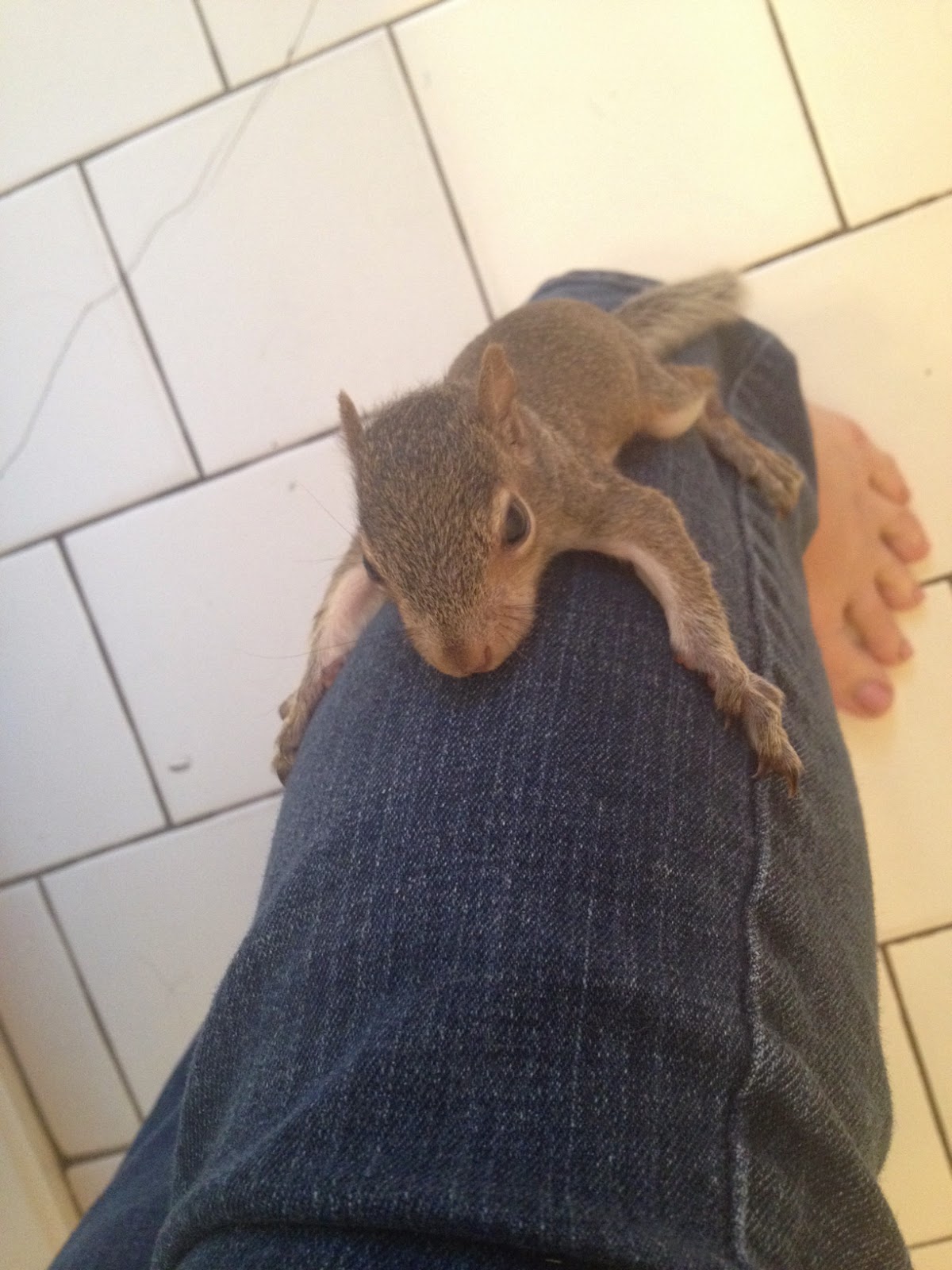 We plan to release him when the time is right (websites say between 12-16 weeks), but for now, he's still on formula. Hoping to introduce solids this week since he just got in his baby teeth! I'll certainly keep y'all posted.
Posted by Bianca at 10:48 PM

He is so cute I can't stand it! That's really impressive that you guys have been able to nurse him successfully like that. Hope you find a good squirrel family for him when he's ready!

SQUIRREL!! I'm excited you're speaking at VVC, me too! Your panel / talk sounds rad. Happy MoFoing!

SQUIRREL! I love SQUIRRELS! And a baby SQUIRREL is just too cute. I want to smoosh him (gently, of course).

I am so psyched about VVC. :D
That is exciting that Sheridan will be there as well. I often thing of her when I am reading your blogs. I enjoyed her blogging.

If you haven't already done so you might want to speak to a state licensed wildlife rehabilitator in your neck of the woods before you turn Herman loose. He must be pretty tame since you rescued him so young. Just a suggestion.

congrats on speaking at VVC.

I second the person who suggested you contact a wildlife rehabilitator in your area before releasing him. When I was little my dad found a baby squirrel in a downed nest after a hurricane (the other babies were apparently killed when the tree fell) and brought him home to take care of. Our vet told him when it was time that it would be a bad idea to release him because he was so trusting of people (or maybe he was just naturally fearless but either way, bad news for a squirrel.) My dad was a long distance truck driver so George the squirrel ended up travelling and living with him in the truck for however many years until he died of old age. I remember him curling up to sleep in my dad's t-shirt pocket long after he was too big to fit in there. My point being, if you end up not feeling comfortable releasing the little guy for whatever reason, they can make very loving, intelligent pets.

That is the cutest little squirrel! Aw, looks like he is doing quite well!

Awesome squirrel!!! I will say that city squirrels become awful used to humans (I used to feed one out of my hand on my lunch break) so he may do better in that setting than the country side when it's time for him to leave the nest. :) I have a question about VVC-if I'm not a blogger, is it worth making the trip? I've been kicking around the idea of a blog for 2 years, but I've never actually started it yet. Just haven't found my voice yet, I suppose. I love Austin though, and I'd love an excuse to make the trip.

Wendy, yes! You don't have to be a blogger to enjoy VVC. In fact, they've designed the con this year to have more non-blogging related workshops. Plus, there's SO MUCH FOOD!! It's worth it for that alone.

On the squirrel release, I've been talking to a squirrel guy and I've been doing lots of research. I'm sure they make wonderful pets, but I have six cats and two dogs, so I'm not sure he would fare well in my house.

Also, the plan is to release him in my backyard so he'd definitely be a city squirrel. My squirrel guy (he rehabs baby squirrels in Austin now but used to live in Memphis) says it's best to let them leave through a window whenever they are ready.

The cuteness is overwhelming! I hope I can make it to VVC this year. I have yet to get there. I would love to see you speak. Love the "Pantry Raid" theme too.

I'm still debating going to VVC3. Either way, it seems like a great excuse to go to Austin though.

Oh my goodness, Herman is absolutely adorable! What a little sweetheart! :)