Tonight, we had our monthly Vegan Drinks meetup at Slider Inn. I must have a craving for sliders every September because, unbeknownst to me, I scheduled this month's meetup for the same place I scheduled us last September! As the name would imply, Slider Inn serves sliders.

Here's the group early on. In this photo is Jennifer Harber, Pam, Richard, Stephanie, and Tiffany. Later, Jennifer Smith, Vaughan, and Nicole arrived, but I was too busy eating by then to remember to take pictures. 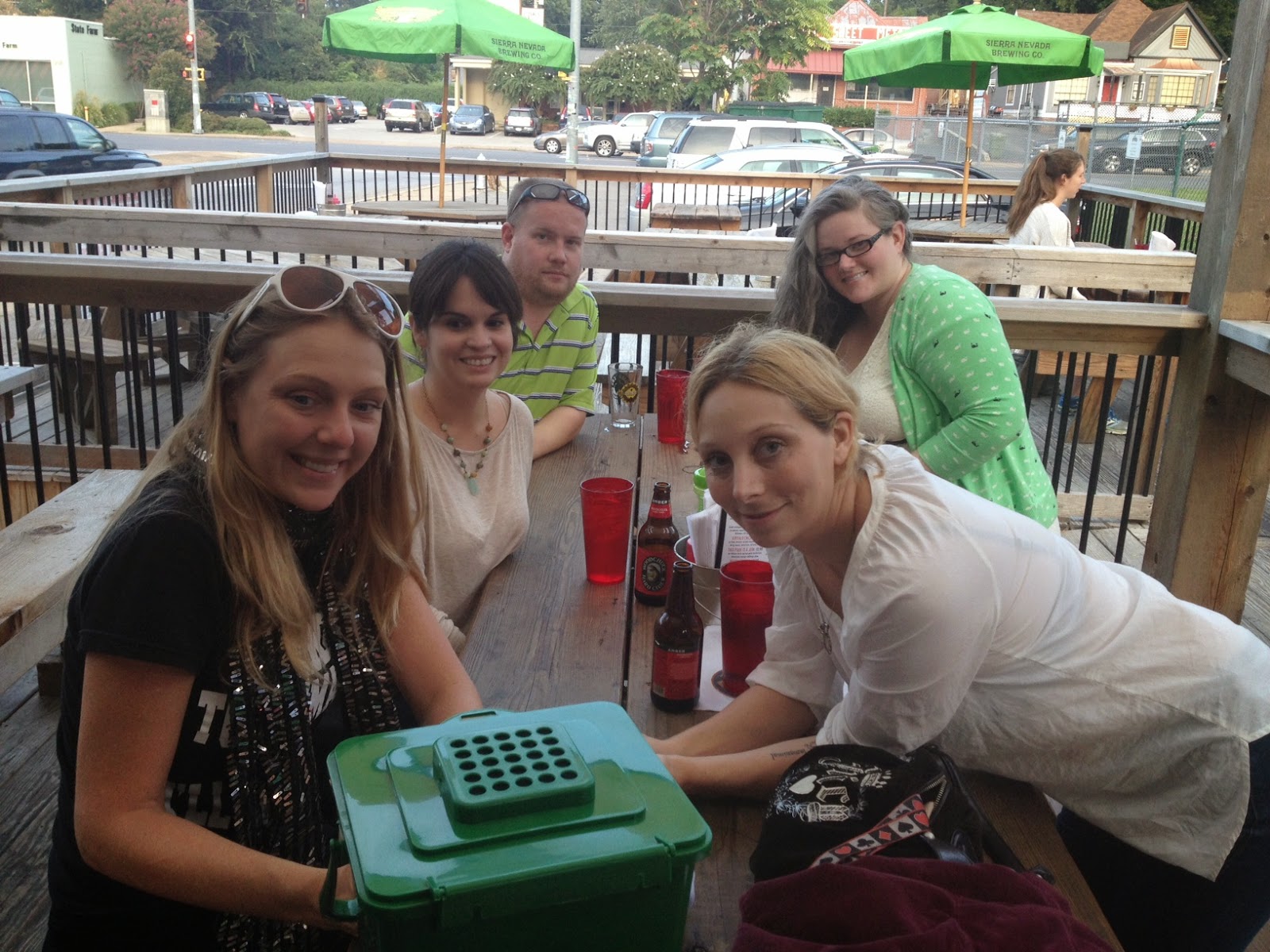 I started off with a New Belgium Tour de Fall Pale Ale. There's a slight chill in the air, and fall is right around the corner, so I figured I should give in to the Universe and get a fall beer. This was a fantastic beer! Even though I sort of hate fall because it means winter is coming, I love the taste of fall beers and fall foods. This had a crisp, almost spicy taste. 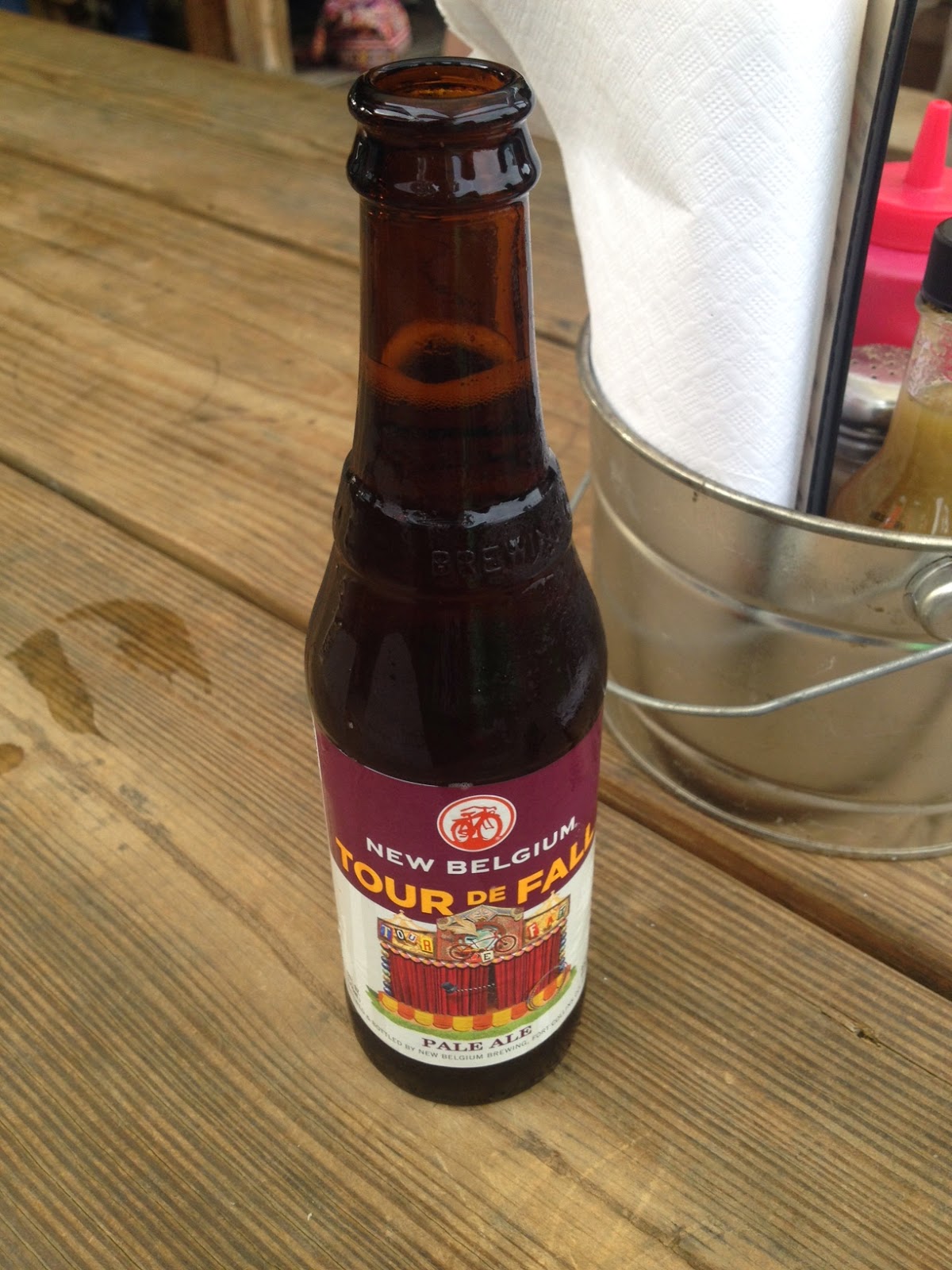 But once that was gone, I couldn't resist one final summer beer (okay, I'm sure I'll have a few more summer beers before the season officially ends on Sept. 23rd) — Memphis Made Soulful Ginger. This is a light gingery saison, perfect for patio days. 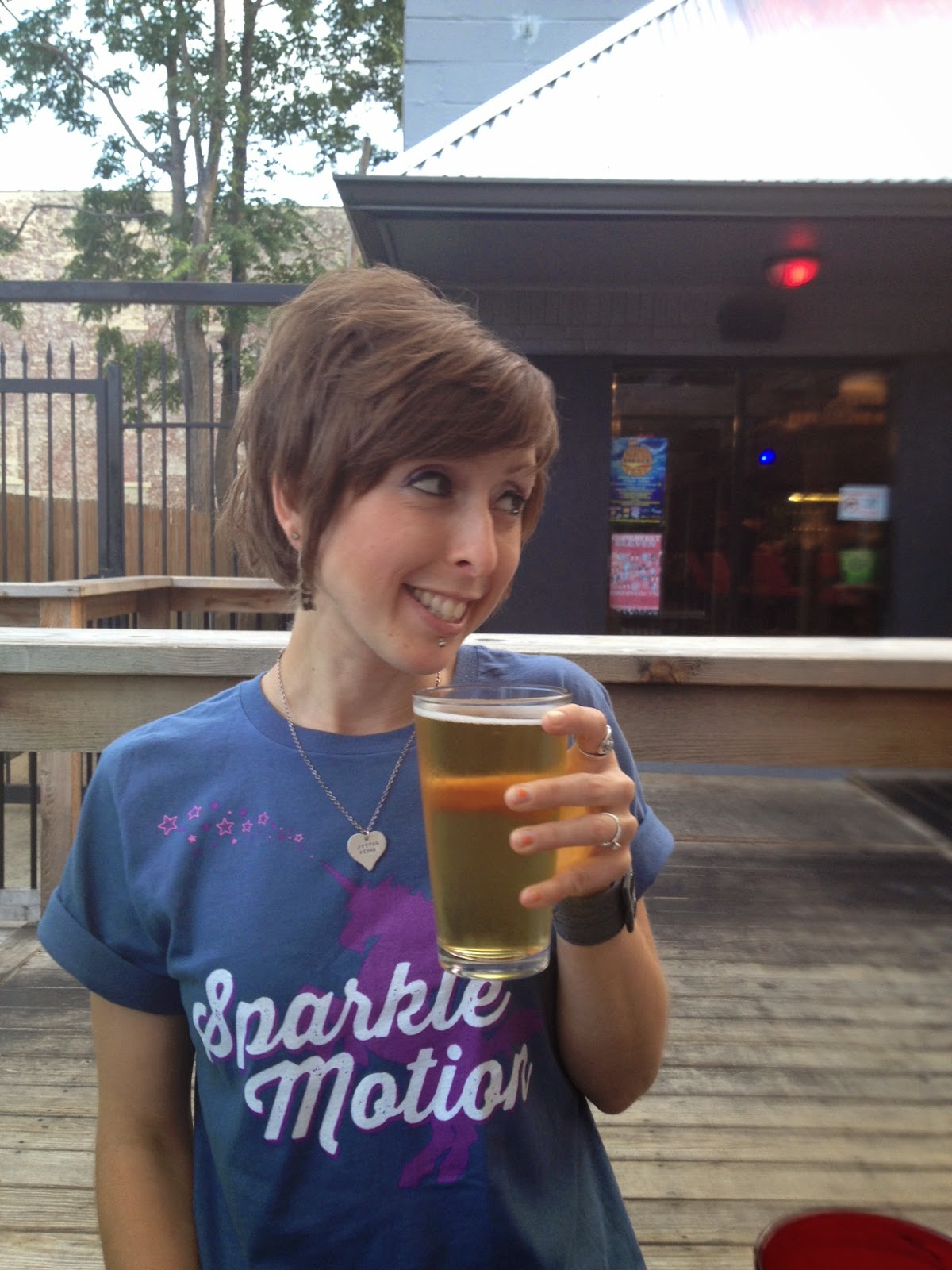 Richard had a Soulful Ginger too, and Jennifer opted for a Woodchuck. Not pictured: Pam also had Woodchuck, and I think Stephanie stuck with Yuengling. 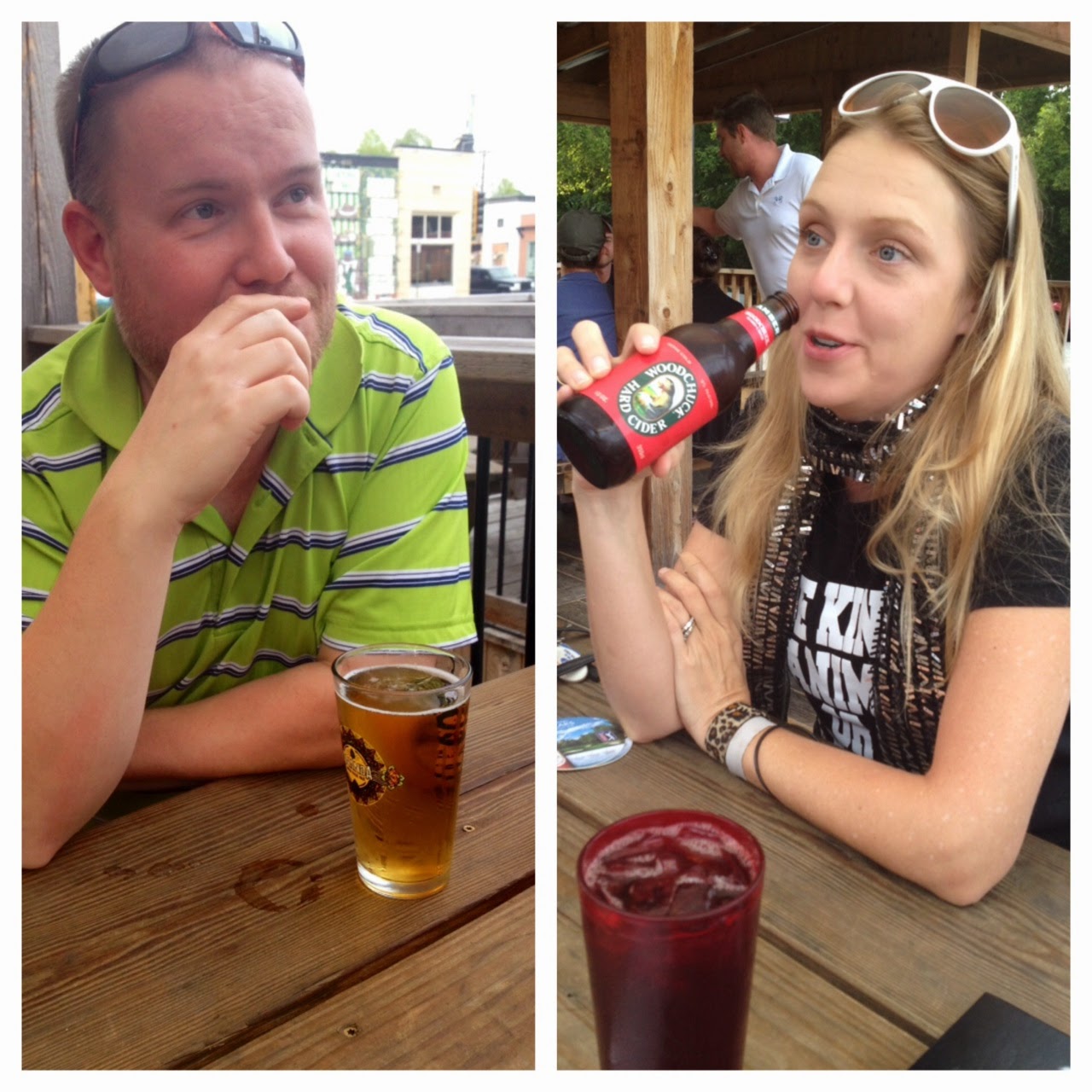 They have three veg options — two that are already vegan and one that's easily made vegan. I'd never tried the Nuts and Berries slider, but I was craving peanut butter for some reason. So these tiny PB & strawberry preserve sandwiches hit the spot. Also, I LOVE Slider Inn's skinny fries. 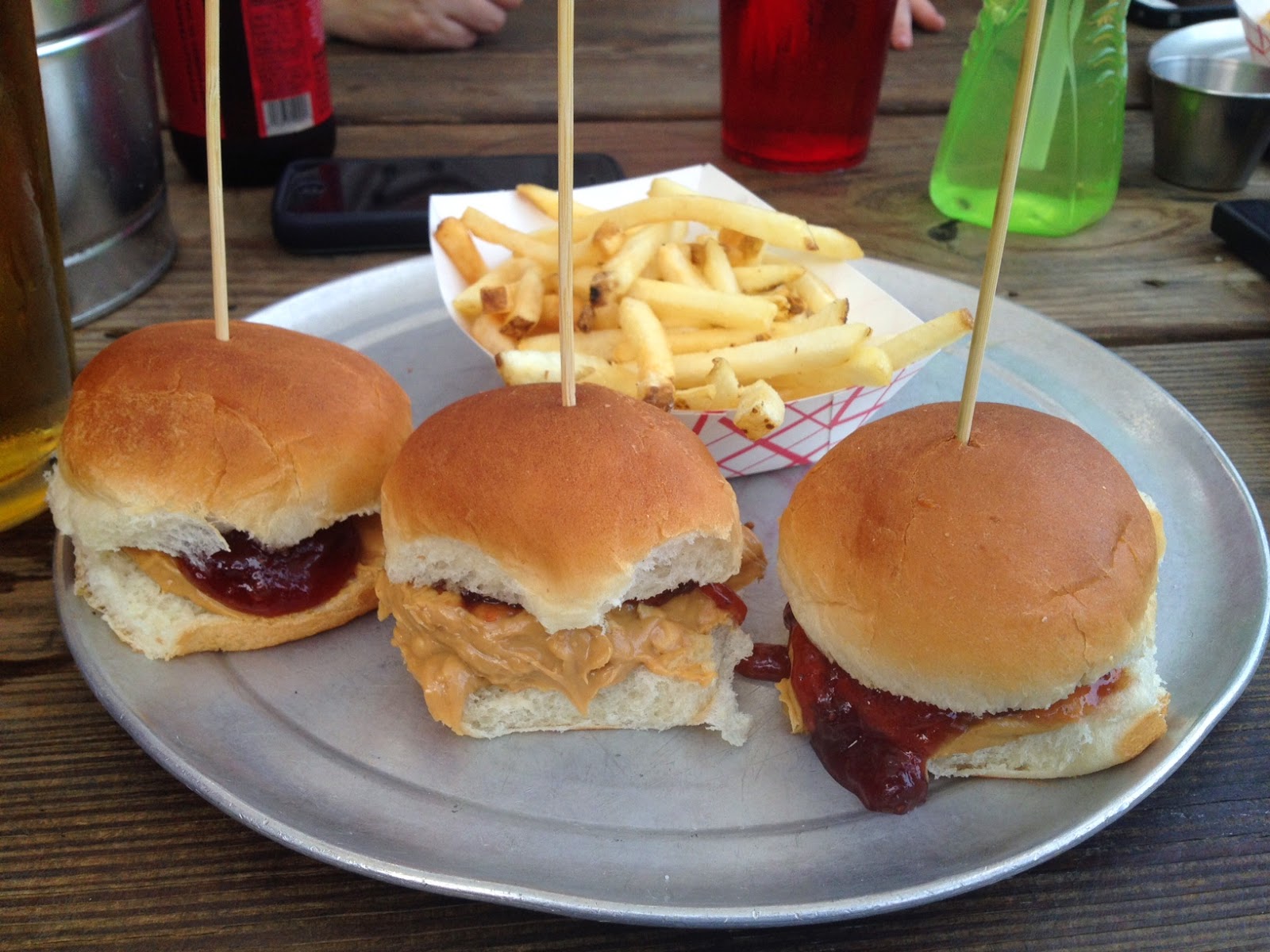 Others at the table ordered the Vegan Triple B slider (beets, black beans, brown rice) with avocado and sprouts (top) and the Falafel Sliders with black bean hummus (bottom). The falafel sliders typically come with yogurt sauce, so you have to get that left off. 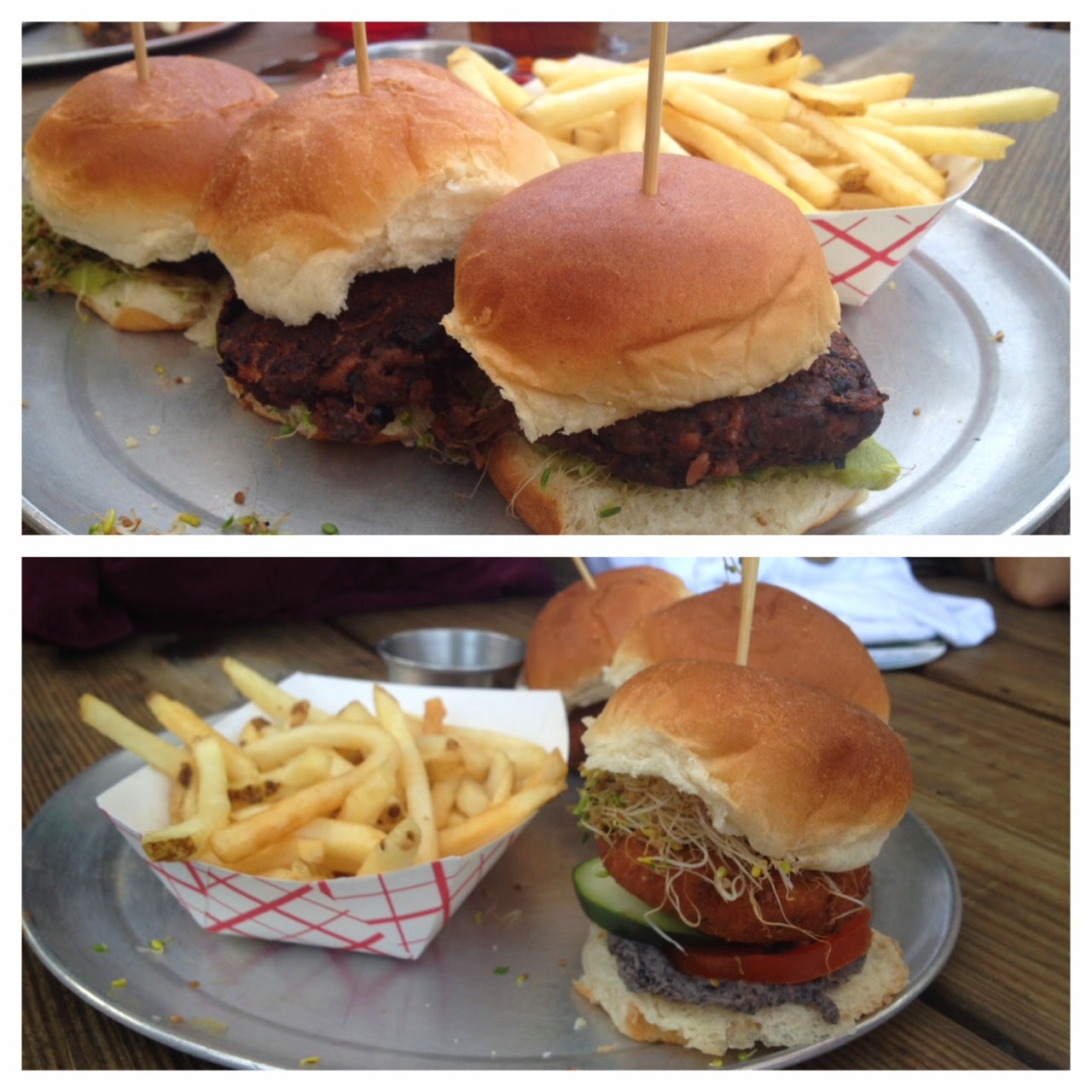 Since we had some latecomers, I hung around until about 8 p.m., just chatting and enjoying patio weather while it's still here. Sigh. I'm really gonna miss summer.

Anyway, if you'd like to stay up-to-date on the next Memphis Vegan Drinks meetup, join our Facebook group!
Posted by Bianca at 10:04 PM

Your shirt is awesome. I just want to yell, "sometimes I doubt your commitment to sparkle motion!!"

Those burgers look great. We need a slider place here.

Yuuuuuuummm. I want all that food right now.

Ooooh sliders! Fun! I want them all right now for breakfast!

How fun! There's not much better than cute little food, which means you get to eat that much more of it! I would definitely be all about the falafel sliders.

Peanut butter and fries? I'm not sure about that! =)

Oh man, Dana totally beat me to it. I no longer question your commitment to Sparklemotion after seeing that shirt, though.

What a fun outing and that place sounds amazing! Seeing you mention Woodchuck brings me back, I used to drink it in Grad School :) Love that stuff! The sliders all look amazing, how cute are those pb&j ones?! The falafel sliders sound amazing too. What a fun night!