Remember that episode of The Brady Bunch when Peter isn't happy with who he is, so he keeps trying on different characters? In one scene, he practices his best Humphrey Bogart impersonation and then he marches into the kitchen and asks Carol and Alice what's for dinner. They say "pork chops" and "applesauce," and then he repeats it —"Pork chops and applesauce. That's swell!" over and over.

That scene has stuck with me since I was a little kid watching The Brady Bunch reruns after school. I can't think about pork chops without thinking about applesauce. Well, it just so happened that last week, I had everything in my freezer and pantry to make a nice vegan pork chop dinner. And that's fantastic since, this Mofo, I'm trying to cook as much as possible using stuff I already have. 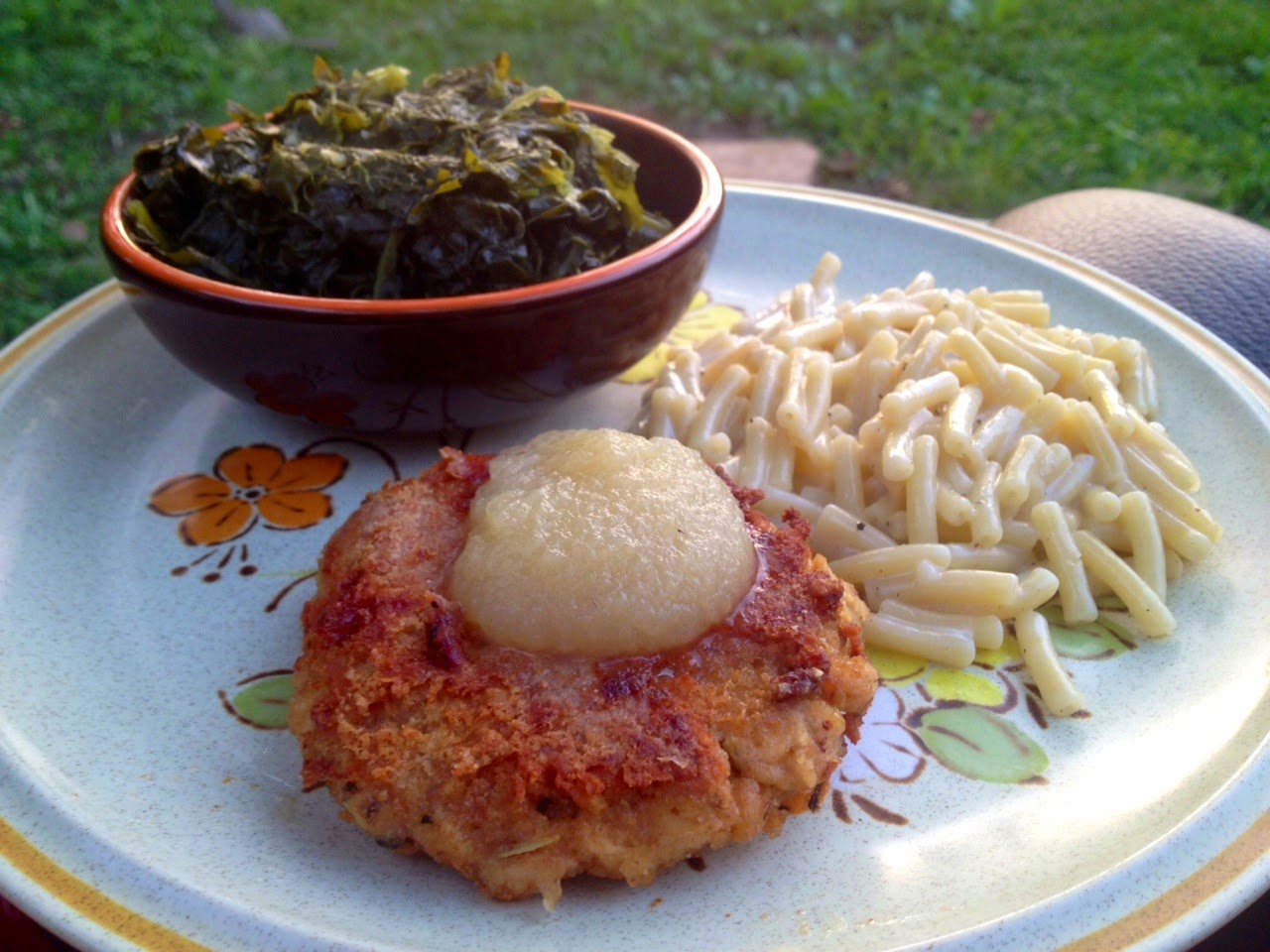 The pork chop is made from Match Meat Ground Pork Without the Pork, which I had in my freezer. I thawed it out, added some spices (garlic, onion, seasoned salt), coated in flour, and fried in oil. I also had applesauce (that I keep on hand for baking) in my pantry.

The mac & cheese is from a box — Earth Balance Vegan White Cheddar, which I stocked up on when it first came out. And the greens are rape greens that my Granny cooked down a few months ago and froze. I just thawed those out and added some more spices and hot sauce. Voila — a meal I didn't buy a thing for!
Posted by Bianca at 11:02 PM

nice - I love it when you can use up so many things that have been lurking around and turn it into a proper meal. Hope you're feeling okay after your wild day. <3

Pork chops and a side of mac and cheese sounds so perfect right now, I'm definitely having some kind of pasta for dinner.

I love that you referenced that Brady Bunch episode! I always think of that episode too whenever I hear about pork chops...and I HAVE to say it aloud with Peter's hilarious Bogey accent. So funny!

Not ashamed to say I look forward to watching Brady Bunch reruns every Sunday morning. Best goddamn show EVER.

Where do you find your Match Meat? Do you buy it online?
I ask because I'd like to try some, but I haven't yet seen it any of the local health food stores. :(

Hi Elise! Match sent me a bunch to review months ago. And this was some I had leftover. It's not available in stores here, so when my stash runs out, I'll have to order. But it's delicious. Definitely worth the hassle of ordering and paying shipping fees.

Haha!! I didn't remember that episode exactly but I definitely remember that moment with the weird accent, and always wondered where it got into my head from!
Looks like a tasty meal.

looks great, what was the 'pork' made out of?