So this totally doesn't fit into my Mofo Pantry Raid theme, but who cares? It's a BABY SQUIRREL!

As some of you may remember, we rescued an orphaned baby squirrel in our backyard a little over a month ago. Our pit bull Maynard was pawing at him, and the squirrel was screaming for its mama. But mama never came, so we took him in and raised him on puppy formula and lots of advice from a wildlife rehab friend. And we named him Herman. 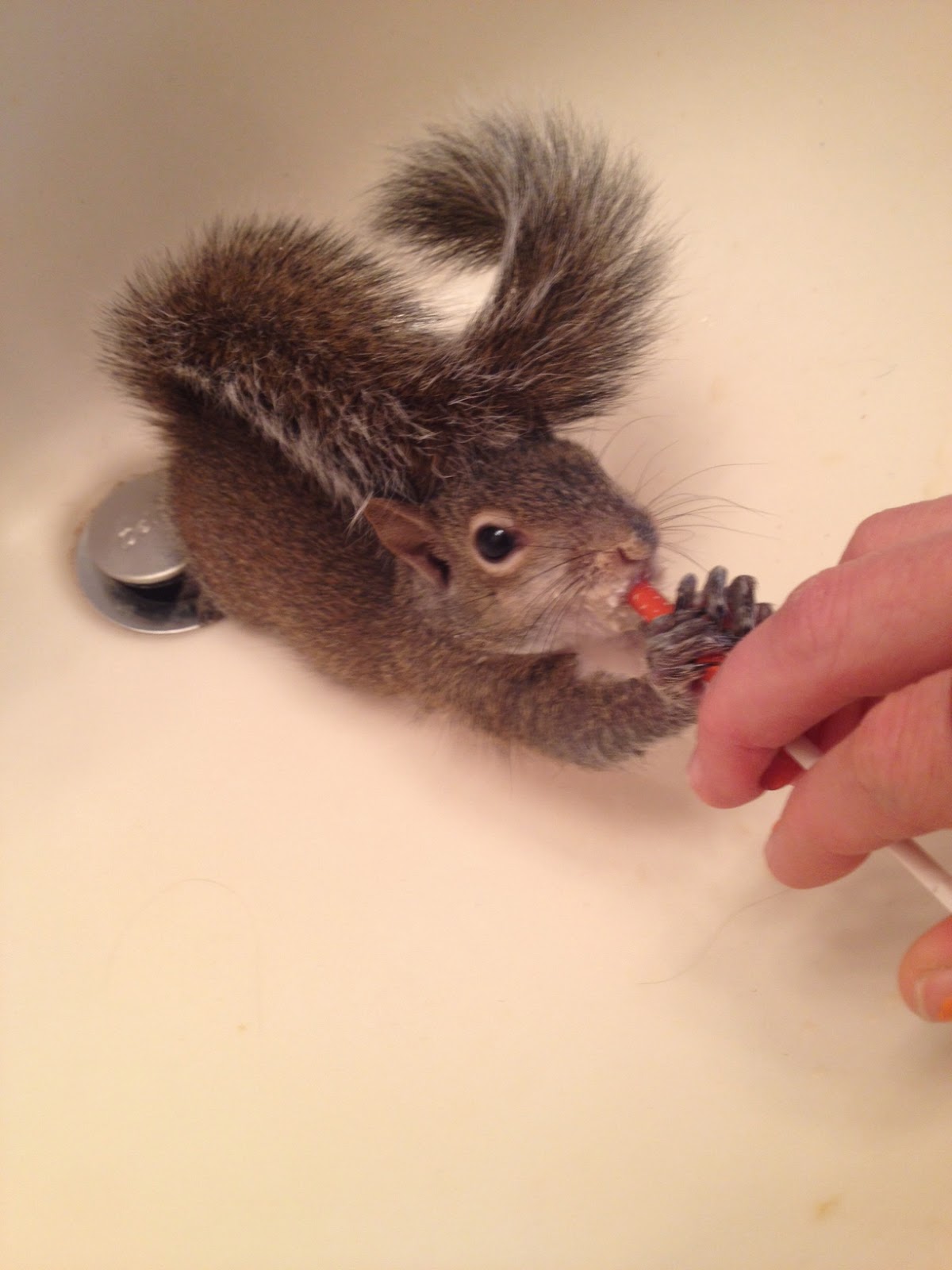 His little eyes opened at five weeks, and now he looks like a real squirrel. He's gone from hairless to sporting this bushy-ass tail.

We assume he's about eight weeks old, and he's still on formula three times a day. But he also eats solid foods now. I've been using this online guide for feeding instructions, and at his age, he's allowed formula, Science Diet Puppy Chow, fruit, and some veggies. He think green beans are just okay. But Herman LOVES apples. 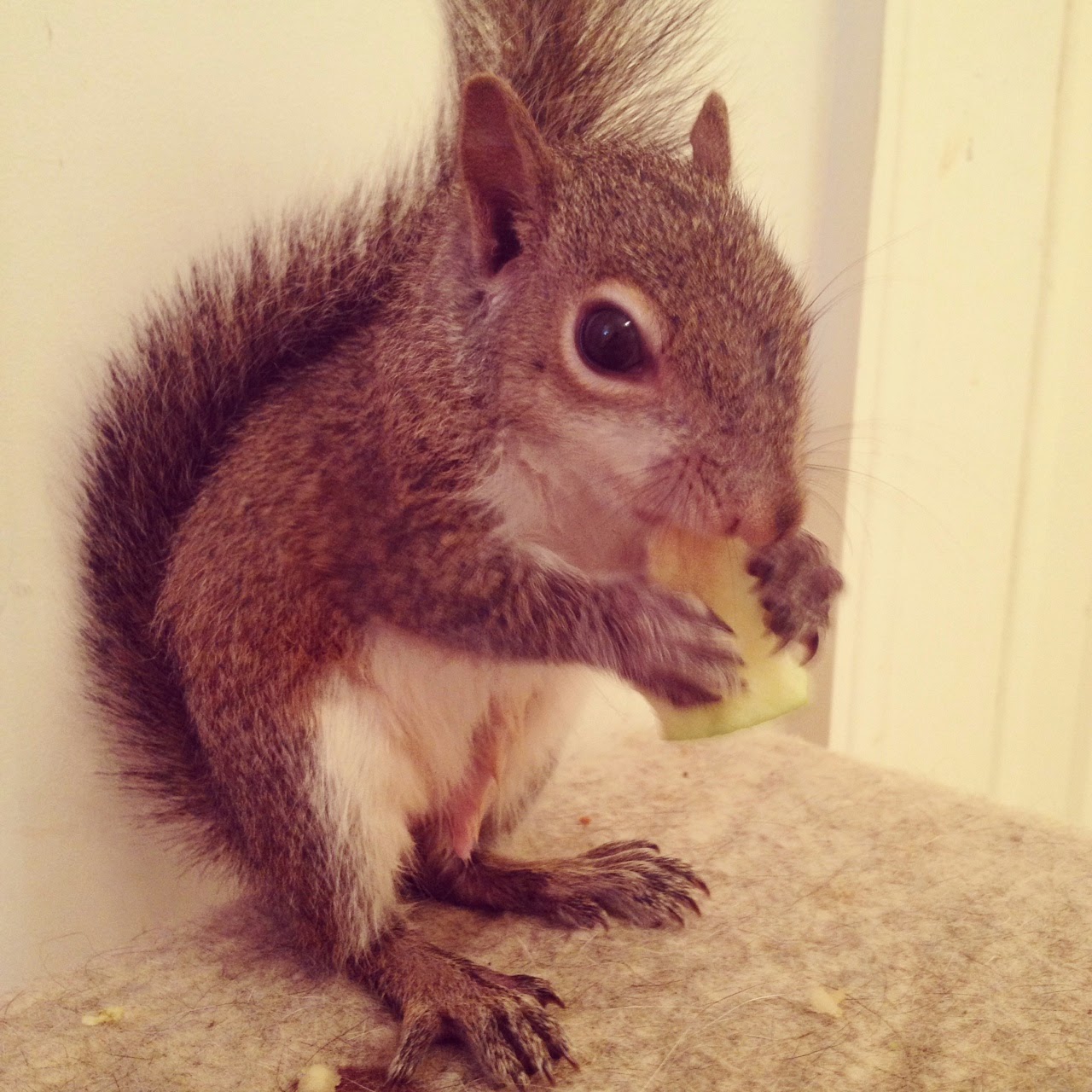 Up until last week, Herman was coming to work with me every day because he was on formula every four hours. He'd get restless in his cat carrier. See! 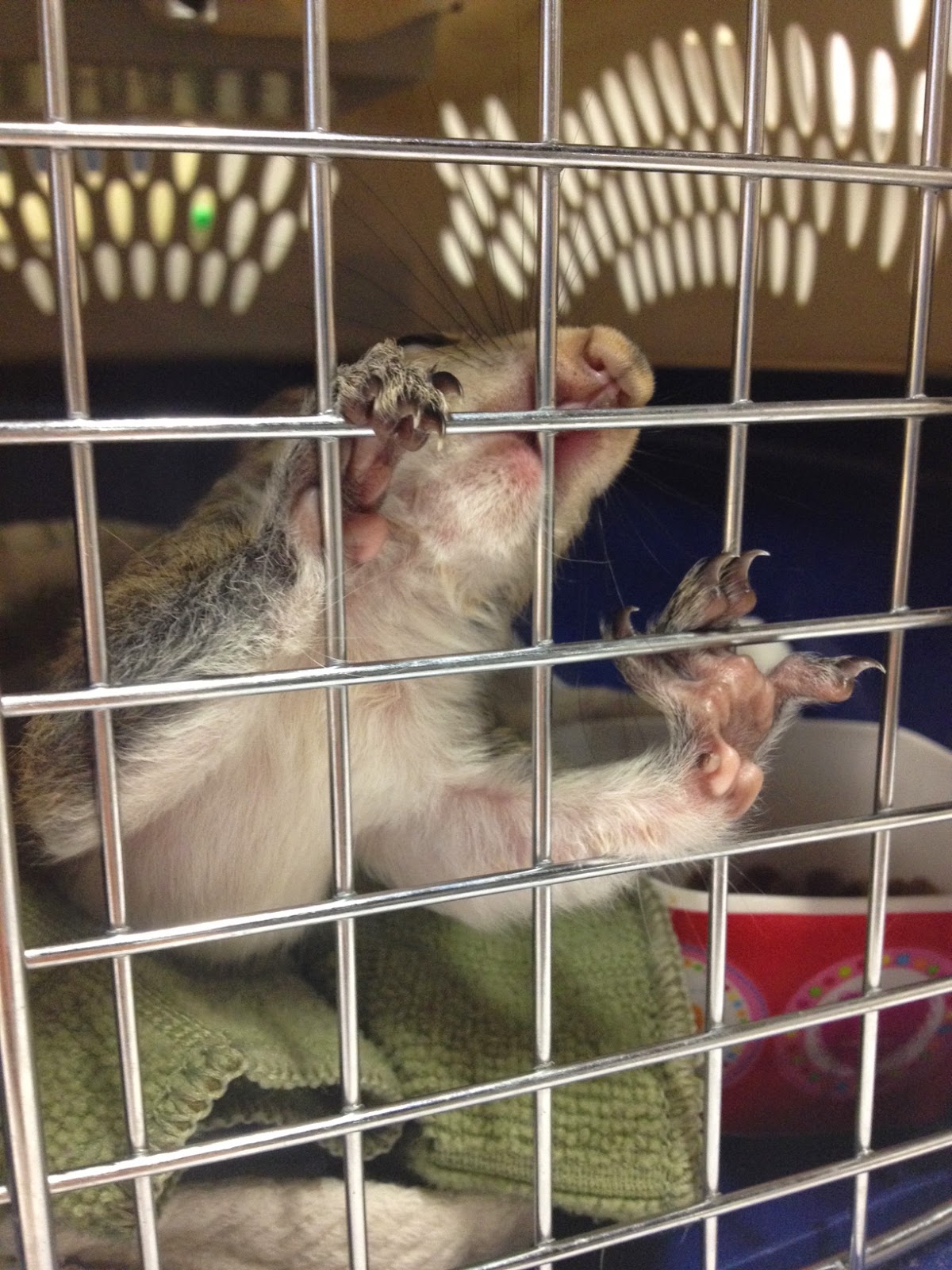 So I let him run around my desk. He loved to climb the cubicle wall and play tightrope between mine and Toby's cubes. 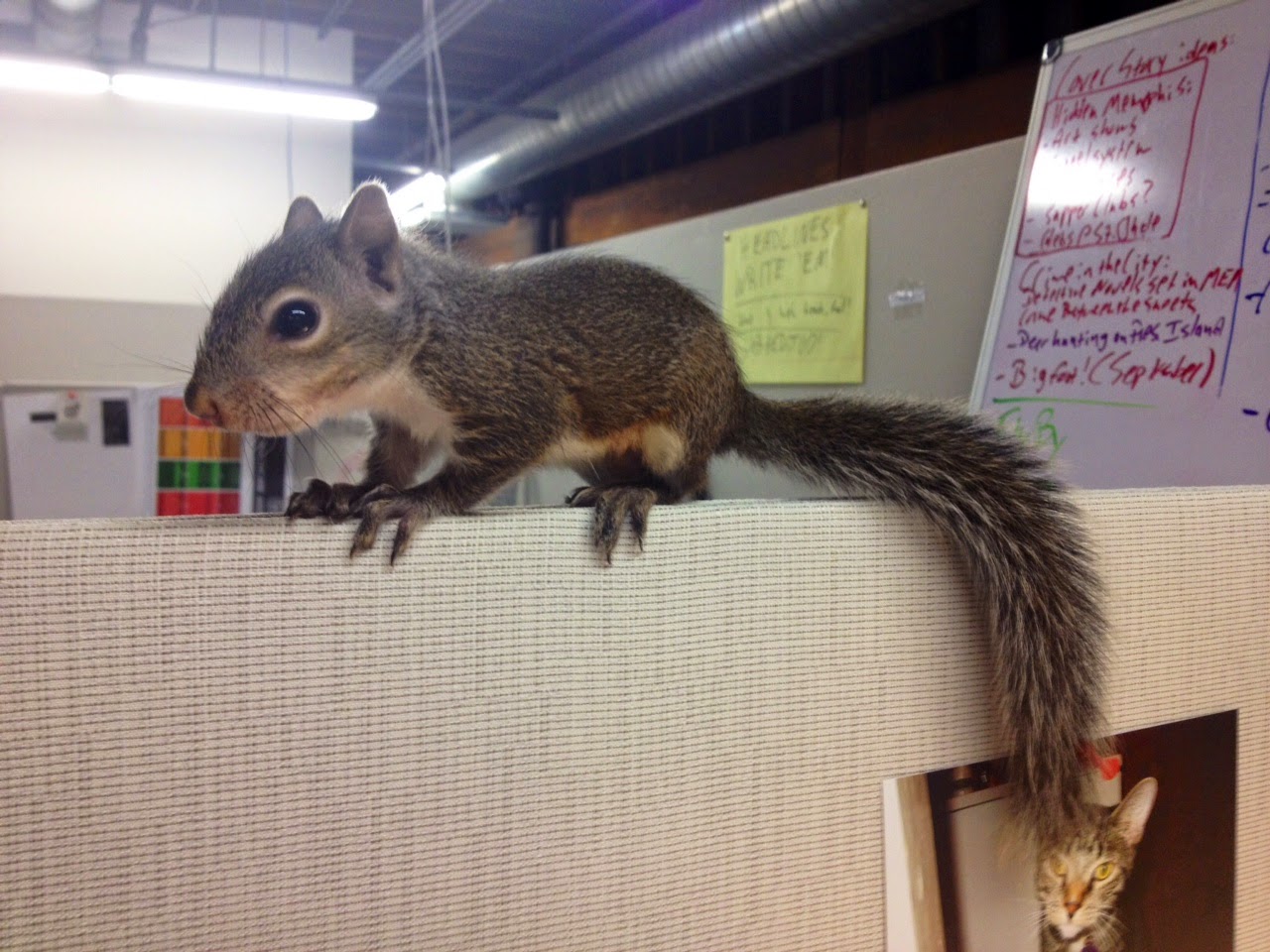 At home, Herman mostly lives in my bathroom, safe from the six cats and two dogs who share our home. I put a cat tree in there for climbing, and he loves to burrow in the toilet paper in the wicker trash can. I also put some cat toys in there. He likes those too. 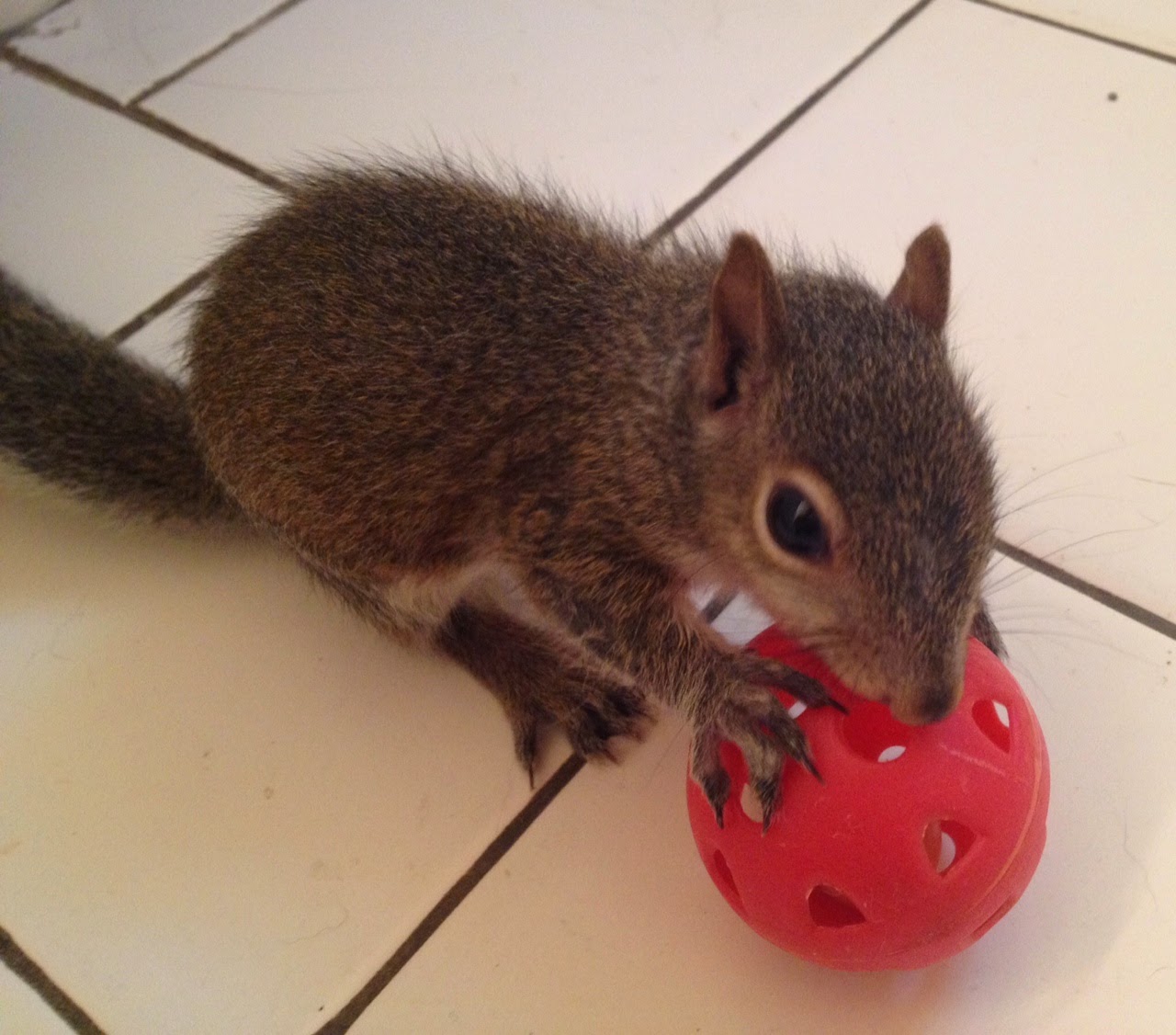 When I'm getting ready for work in the morning, Herman uses me as his own personal jungle gym. I attempted to film him on my butt.


Last time I posted about Herman, a few commenters asked about the long-term plan. For now, that plan is release when the time is right. My wildlife rehab friend said they acclimate to outdoors very quickly, and when they're ready to go, they let you know (usually between 12 and 16 weeks). We've been taking Herman outside for supervised playtime. Right now, he'll sniff the grass and run right back up my leg, all the way up to my shoulder. He likes to perch.

But don't worry. I'm not planning to just dump him outside! We will acclimate slowly, and the plan is to let him come and go for as long as he pleases. I just think Herman would be happier living a nice squirrel life outside instead of being cooped up in a bathroom. And the rest of my house is way off-limits since it's filled with predators. If my cats knew he was here ... man, I don't want to think about that. They're evil little bastards.

But I'll keep y'all updated. I'm sure there will be more squirrel posts to come!
Posted by Bianca at 10:59 PM

So amazing! And I totally wish I worked in your office. I would love to have Herman climb on my desk!

Herman is so cute! I am so glad you could save him. Thanks for the update, it's been cool seeing him growing up!

Such an adorable squirrel! You're incredible for caring for him, Bianca. So awesome.

Big props for taking care of the little guy, and giving him an great name!

aww.. sooo cute! we did the same thing with 2 baby squirrels about2 decades ago. 3 had fallen off, 1 did not survive. the other 2 spent a few weeks with us. One them left a week earlier. the other one would keep coming back, so after a few weeks, mom left him on a tree in another block.
I can't imagine keeping them with so many cats around :)

[ Smiles ] Herman is an adorable squirrel.

How nice you can bring the baby squirrel to work! And how nice of you and your bf to take care of him. It must be a lot of work, and not letting any cats go inside the bathroom must not be easy either. Keep us posted!

This is so full of awesome. <3

Oh my goodness!! Herman is adorable, I've always been a big squirrel fan!

Herman! What a spunky little cutie! I was still traveling (and not interneting) when you posted the original Herman post so I had no idea you were in the squirrel-rescue business now :)

You guys are awesome for taking him in and caring for the little guy. Thanks for sharing!

PS: Now I want to have a butt squirrel too!

He is such a cutie! We have tons of squirrels in our backyard along with a lot of other wildlife. They are all especially abundant with the drought here in CA. We're also lucky to have an amazing wildlife rescue in our town. This past Monday I brought in a baby rat that one of my cats brought in the house. Luckily she never seems to harm any critters and Wildcare gets a donation every time we bring a critter in. You're doing a great job with Herman!

What a handsome fellow! I admire that you're able to send him back to a life outdoors. He's so cute, I think I'd be tempted to keep him, which wouldn't be fair.

Sorry to burst your bubble but I'm sure your evil little bastard kitties can smell Herman in the house. They'd have to have had completely lost their sense of smell not to! Recent studies suggest that cats have a better sense of smell than dogs. But don't worry, it sounds like you have them trained to leave that area alone, :-)

Considering how excited I get every time I glimpse a SQUIRREL! when I am in the US, I can't even imagine how cute living with one would be.

You are wonderful for looking after him!

I was wondering what the kitty cat/squirrel situation was. He is SOOOO cute, I'm sure you're going to miss him when he 'leaves the nest' ;)

Oh my goodness, I never knew a squirrel could be so cute!

Awww, he is the cutest!!

What a cutie! He's lucky he landed in your backyard - you're obviously taking such great care of him. Keep us updated! :)

Yay, I'm so happy for an update on Herman! Adorable pictures (& video!); he is such a cutie! :D