I spent Saturday (and part of Sunday morning) in Little Rock, where my bestie Sheridan lives. Even though we only live two-and-a-half hours apart, we rarely see each other because our lives are so busy! But it was my turn to come down there, and this time, I brought my partner Paul.

For at least a couple years, Sheridan (she's vegan too) and I both have been reading Vanishing Veggie, a blog written by Little Rock vegan Dana. We've read all about her cleanses and her running, her smoothies and her take on LR vegan food. But neither of us had met Dana in real life, so Sheridan arranged a meet-up for lunch at U.S. Pizza as soon as Paul and I arrived in Little Rock. That's Dana on the left and Sheridan on the right. 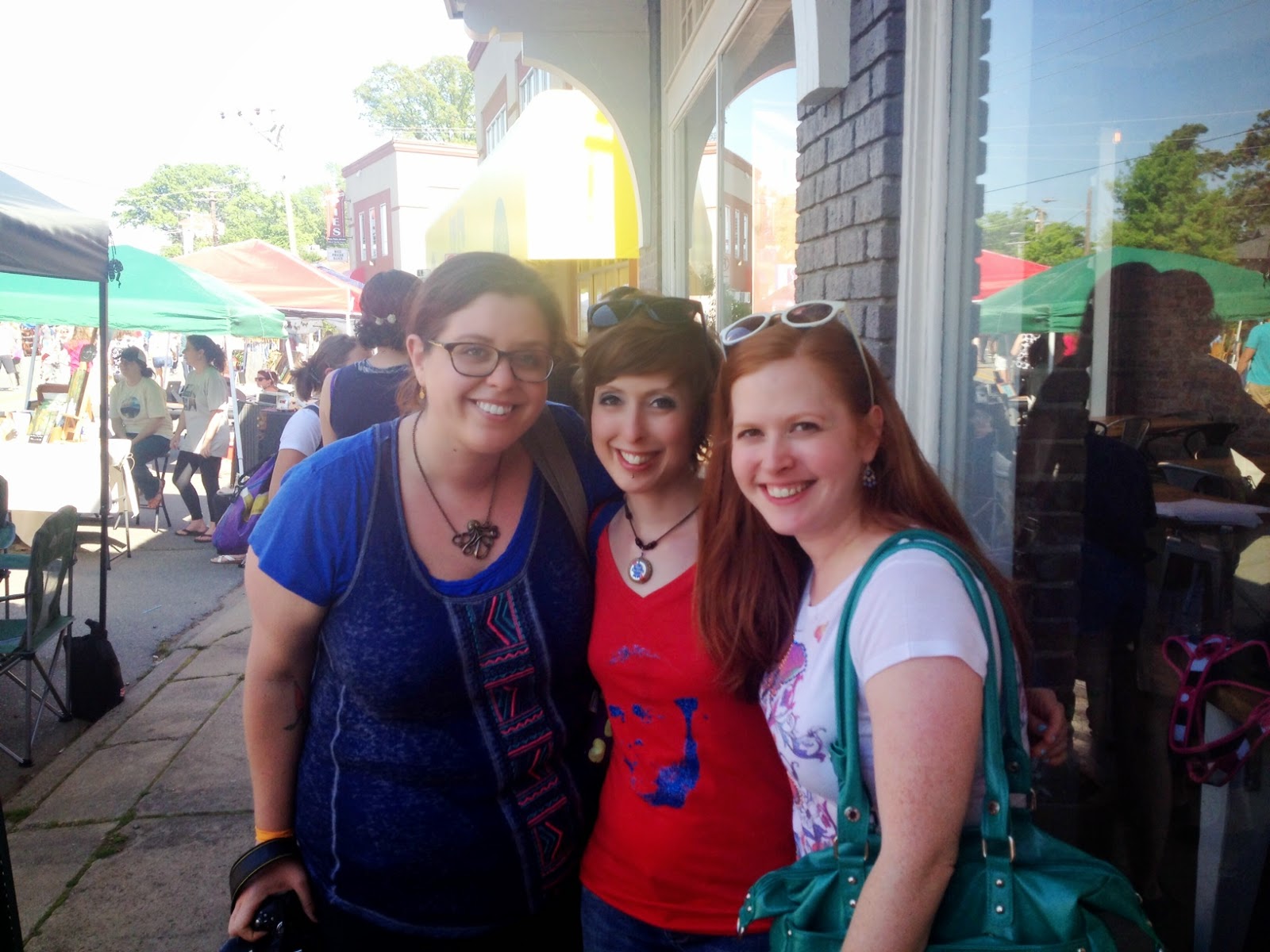 OMG, Dana was so cool! We knew she would be since we felt like we knew her from reading her blog. But she was even more fun for realsies. Of course, we all started with beers on the sunny patio. This was a Schlafly Summer Lager. 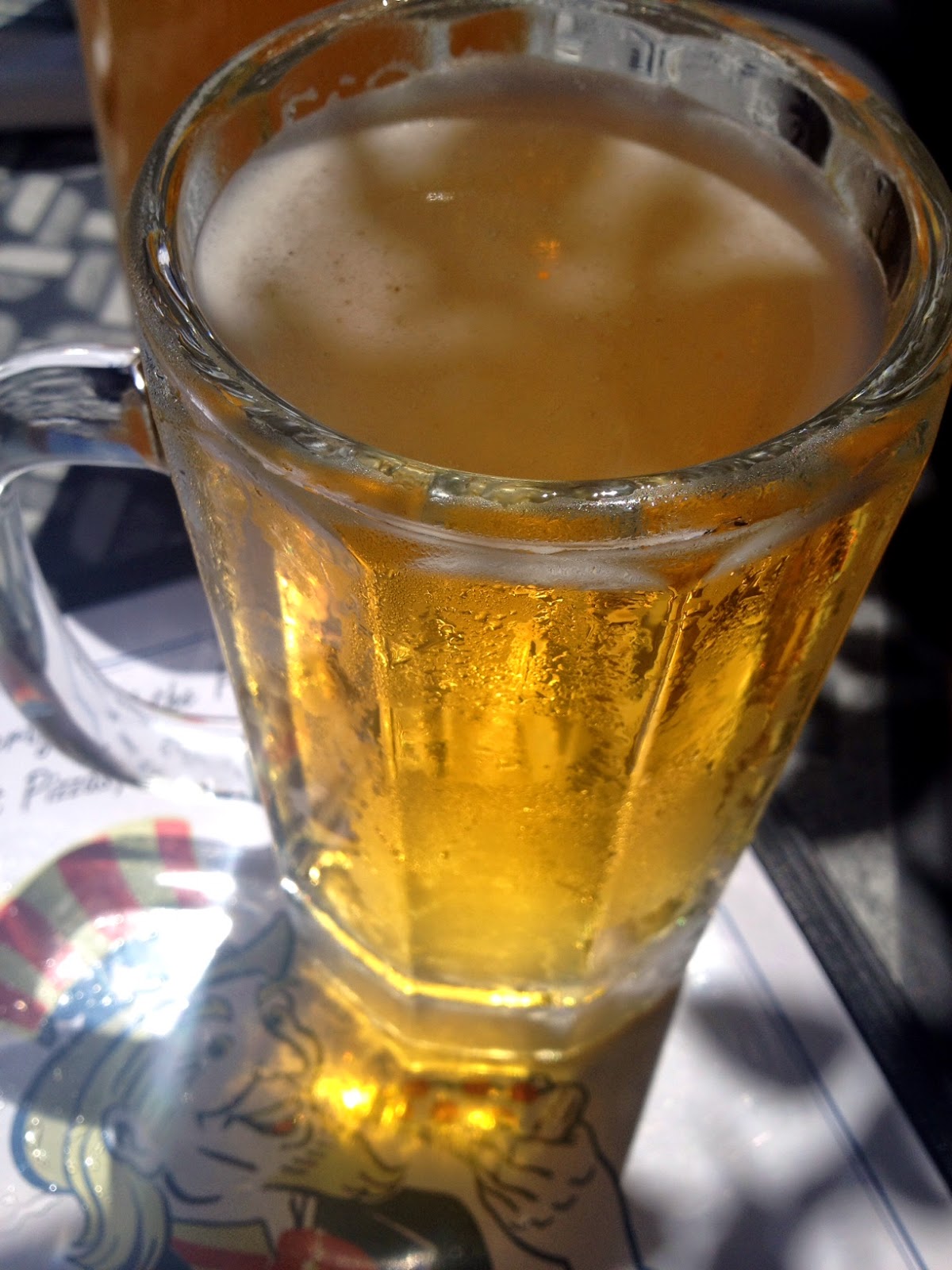 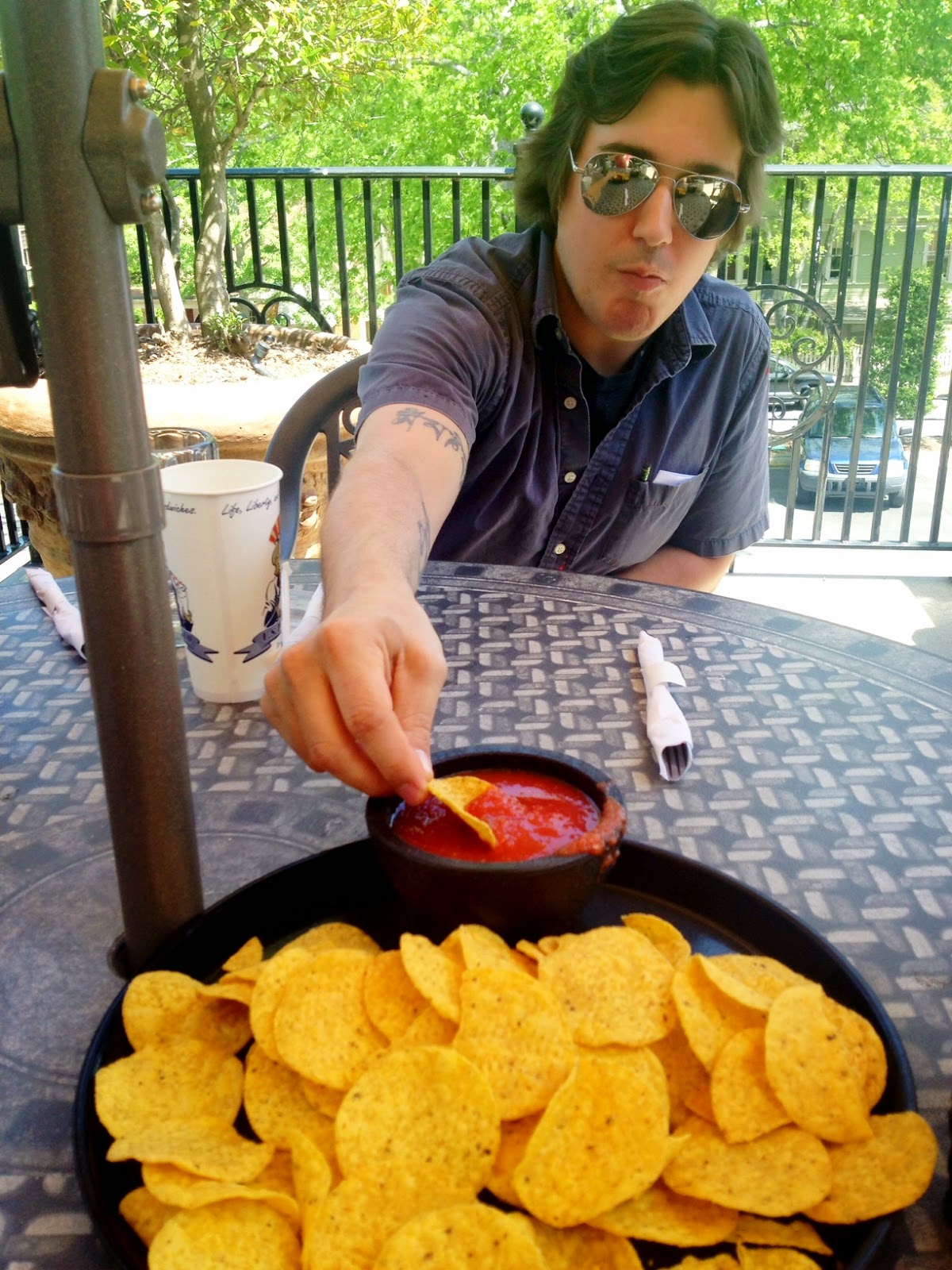 Dana goes to U.S. Pizza a lot, and even though they don't have vegan cheese, she has a little vegan pizza tip for ordering there. Order a Veggie Medley Pizza without cheese. This had pineapple, artichokes, spinach, tomatoes, and all kinds of stuff. 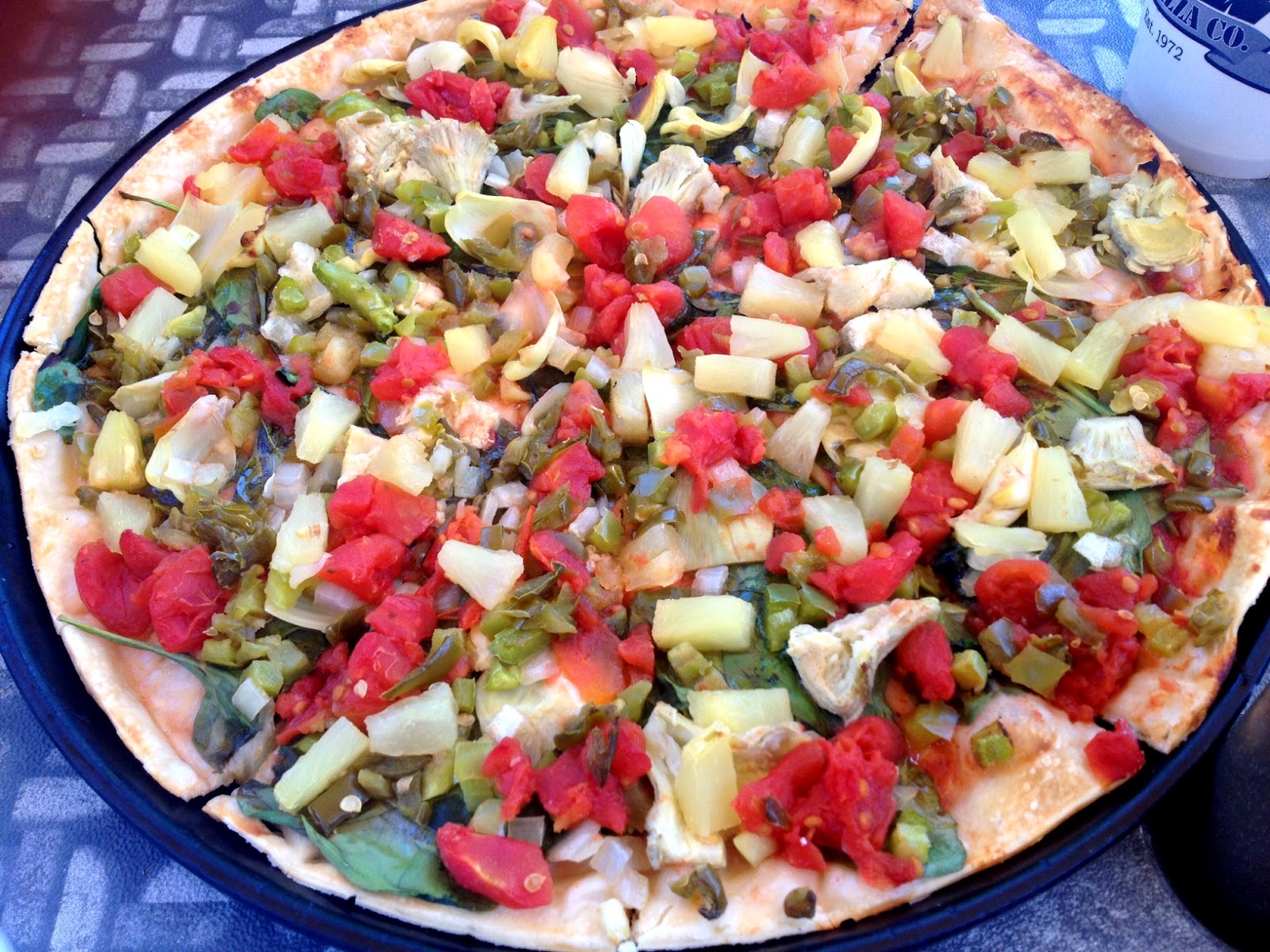 And then order Guacamole!! Lots of it. And then spread it over the pizza. Nature's cheese. This was delicious. 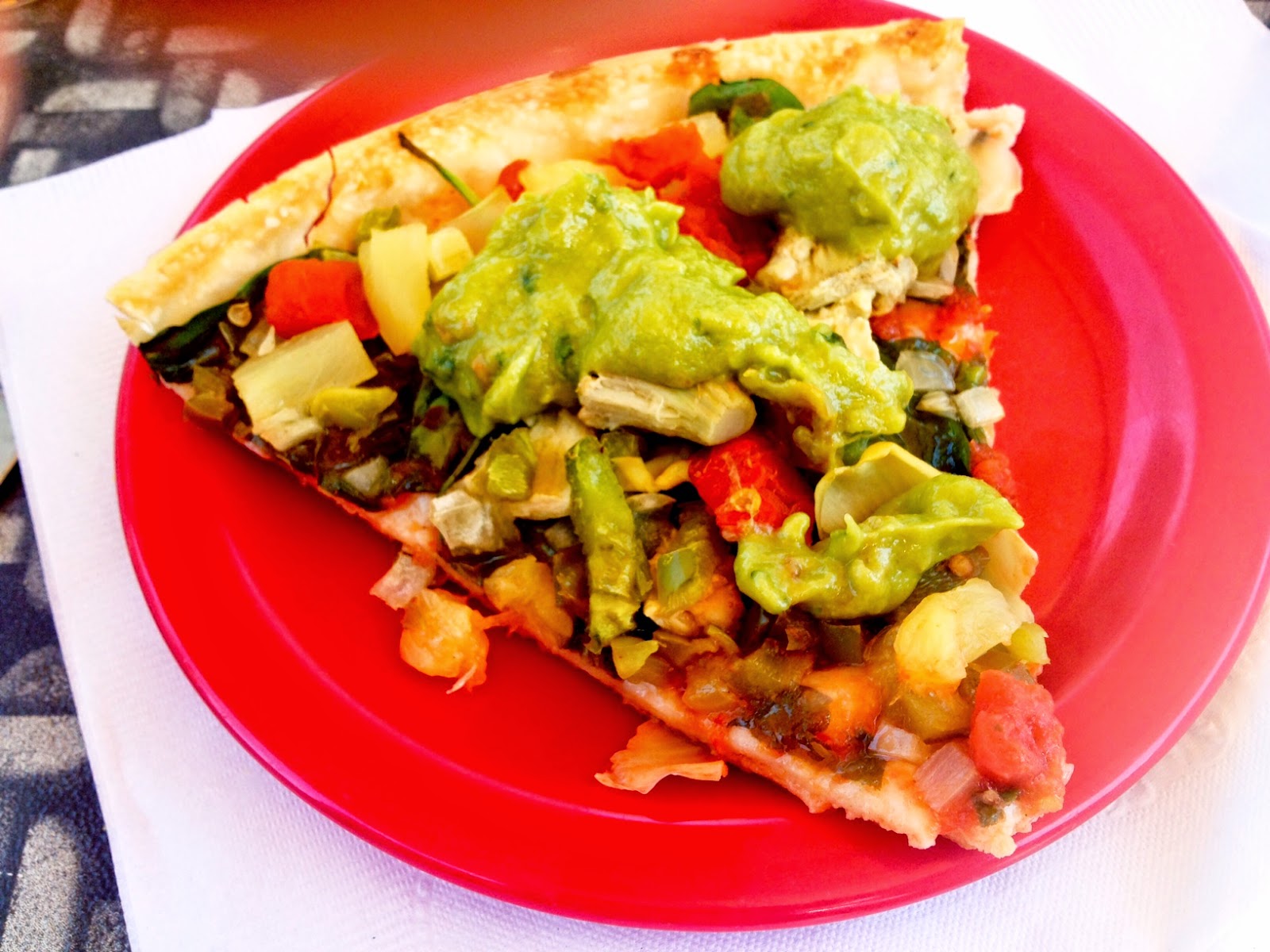 After lunch, we strolled around the Little Rock Etsy Festival and had some beers before heading back to Sheridan's to freshen up for dinner. We said goodbye to Dana, but I have a feeling we'll be hanging out with her again soon!!

For dinner, we'd planned to eat at The Fold, a vegan-friendly gourmet taco shop. We got a late start because we were so full from dinner, so we didn't arrive at the restaurant until around 7:45 p.m. 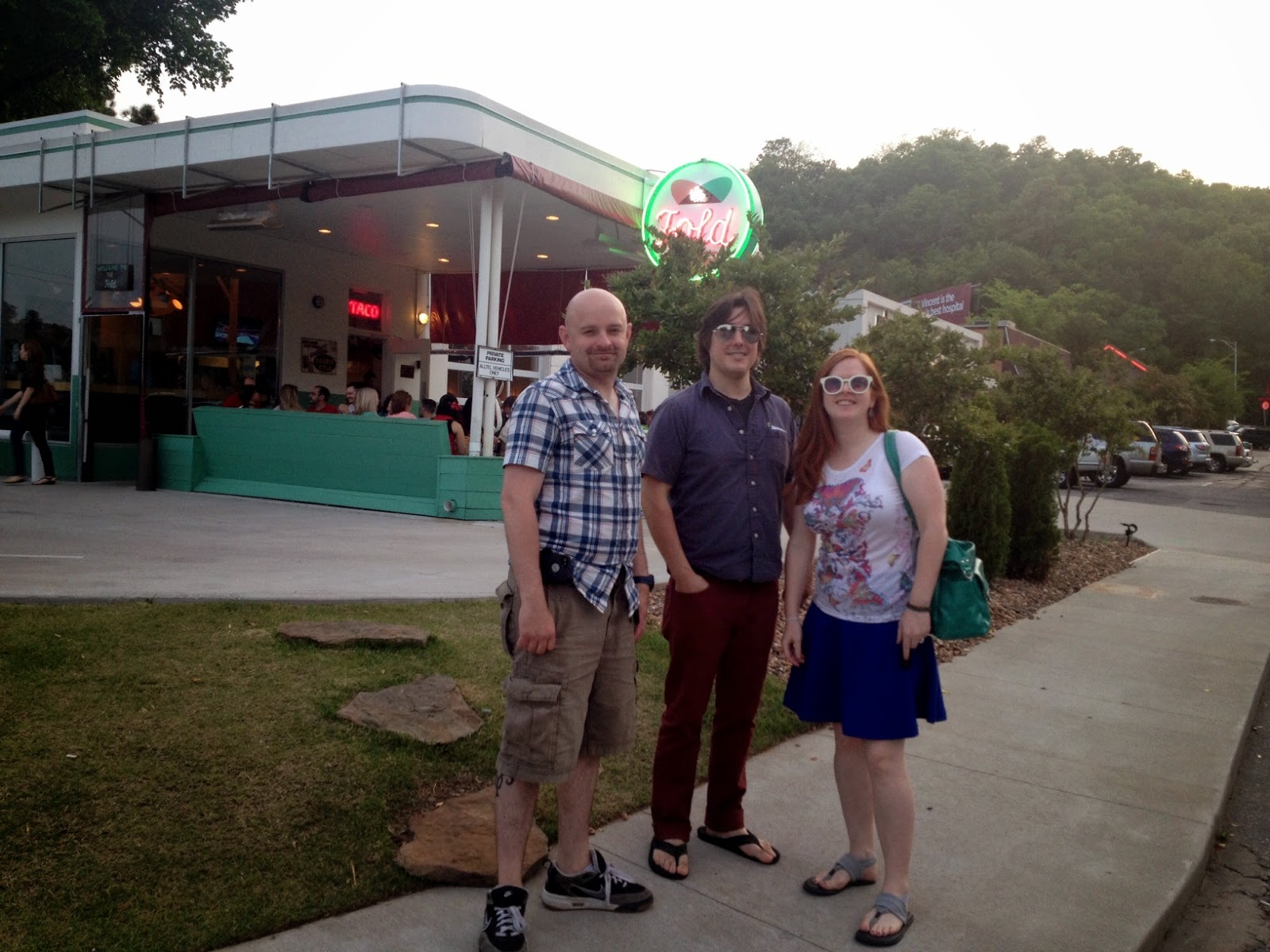 After this pic was snapped, we went inside to get a table and were informed there'd be a 55-minute wait!! No way, Jose. We were pretty hungry at this point and did not want to wait until 9 p.m. to eat dinner. So Sheridan and Drew suggested Cantina Cinco de Mayo. It's a more traditional Tex-Mex place with a vegetarian menu. We arrived and immediately ordered Margaritas. Sheridan and Drew always get the Vegetable Chimichanga and sub the usual cheese sauce on top for ranchero sauce. We all ordered this same thing. 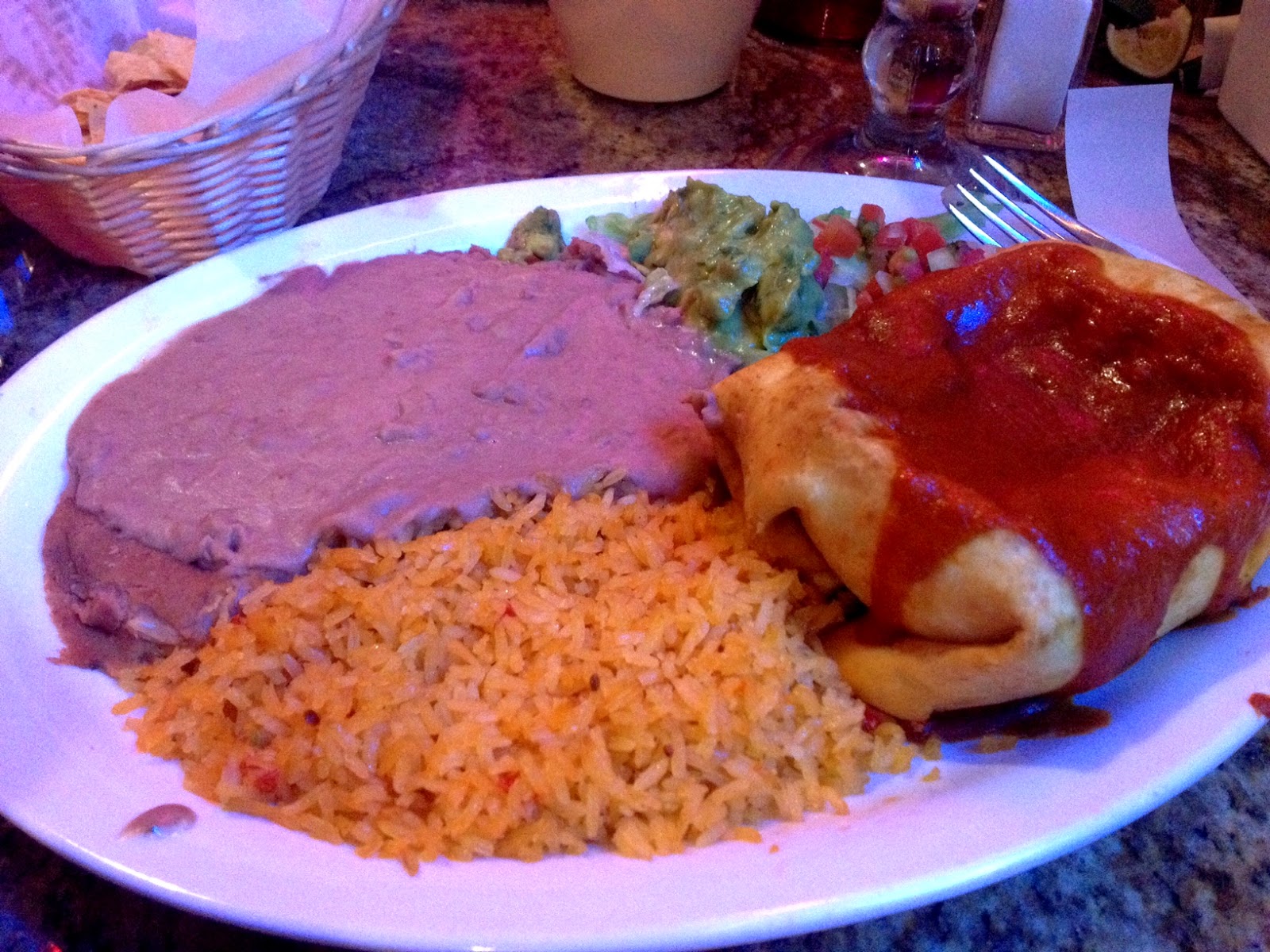 I'm hoping those beans and rice were animal-free since they were listed on the vegetarian menu. But you never can tell with Tex-Mex restaurants. I always just hope for the best and don't ask too many questions. Sheridan and Drew have a similar "eating out as a vegan" philosophy.

After dinner, we were stuffed! But we weren't done eating. We headed back to Sher's house, and Drew made us Dark 'n' Stormys (rum and ginger beer) and Bloody Marys. Then we lit up the grill outside her apartment to make S'mores with Dandies and dark chocolate! 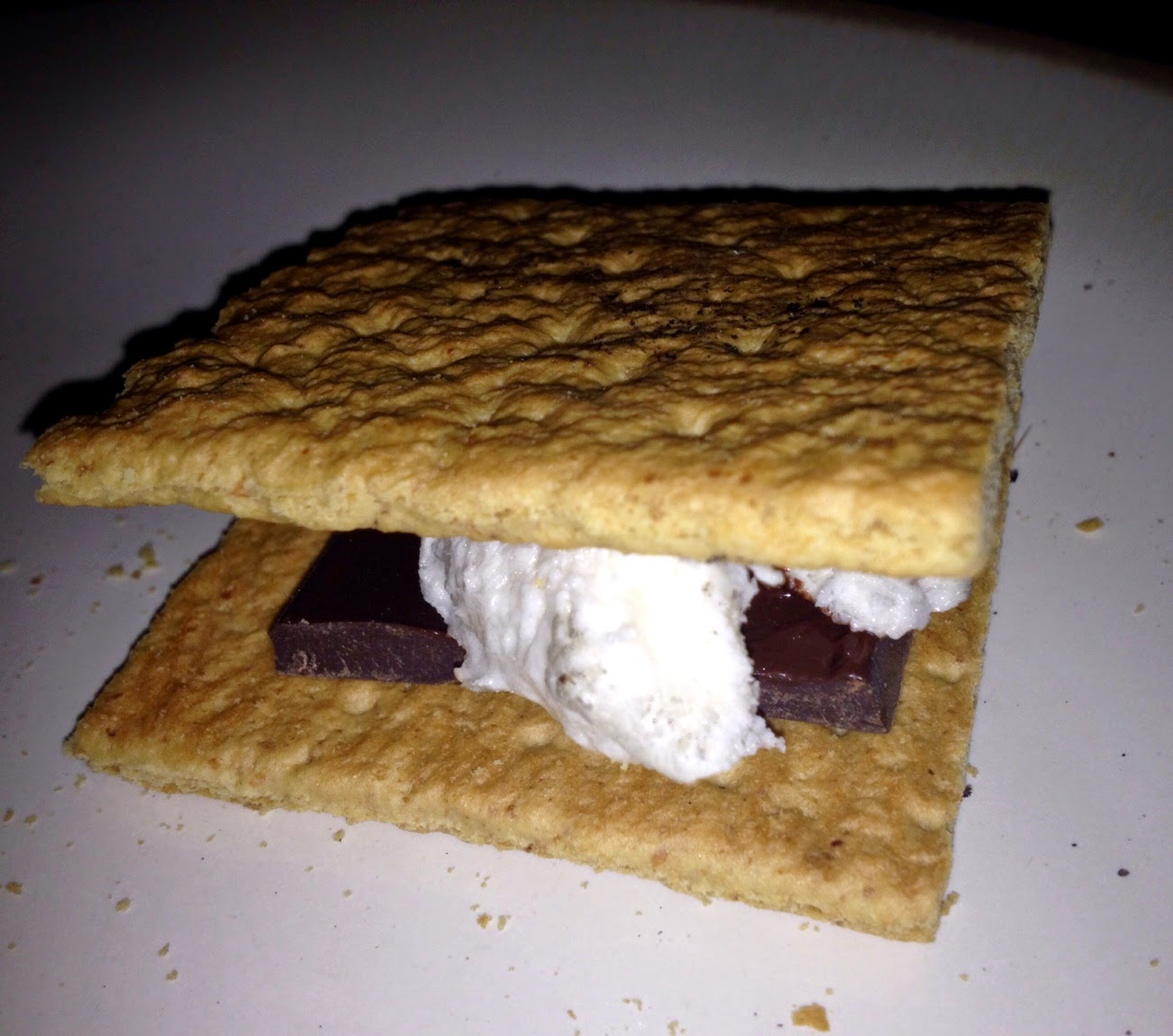 These were so good even though we were totally stuffed. Afterward, we went inside and played Cards Against Humanity. Later in the night, Sheridan brought out some Tofutti Ranch Dip and Ruffles for snackin'. I didn't get a pic, but that was probably my favorite food of the day. There are few things better than chips and ranch dip.

When we awoke this morning, we felt so guilty for all the crazy eating we did on Saturday. But that didn't stop us from eating more! Sheridan made us Breakfast Sandwiches with Simple Truth Organic Meatless Breakfast Patties, Daiya Cheddar, homemade tofu eggs, Vegenaise, and sriracha on English muffins! 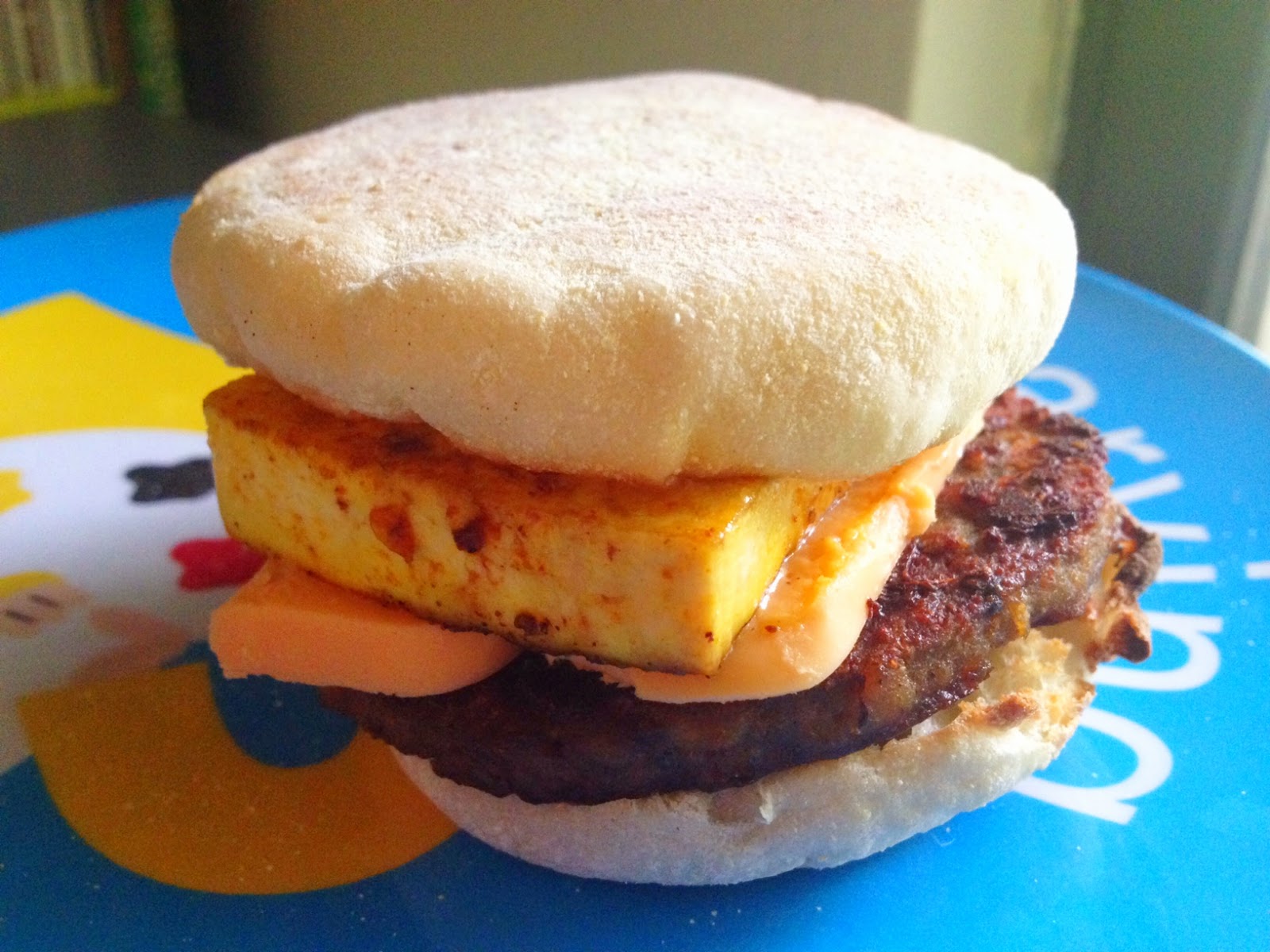 After breakfast, we did a quick spring planting ritual to honor the upcoming Beltane holiday, when we celebrate the fertility of the Earth. And then Paul and I headed home to Memphis. Unfortunately, we ran into a massive storm on the way home, and the ride was quite scary. But we made it home in one piece. We later learned there were tornadoes behind us! So glad we got home when we did.

I had such a FABULOUS time hanging out with my best friend Sheridan and Drew. And I am sooooo glad that we finally met Dana! Yay for new vegan friends and old vegan friends!
Posted by Bianca at 6:15 PM

How fun to meet fellow bloggers in person! Lots of great food too!

Those breakfast sandwiches look BomBBB.
Glad you got back home okay!

It was soooooo much fun having you guys here and getting to meet up with Dana!!! I love you!!!

Yeah, that tornado was no joke. Passed over Conway (where I live) but Mayflower got hit pretty bad.

Looks like you had an epic food weekend, Bianca! I definitely agree though, not much is better than tofutti sour cream ranch dip with ruffles haha

I had SO MUCH FUN hanging out with you guys! We will definitely do it again soon. That breakfast looks so yummy! We were going to do the vegan breakfast tacos, but we got some fresh strawberries from a guy down the street, so we did strawberry smothered pancakes instead. Win win in my opinion!

You guys should come back, we have so many awesome restaurants in Little Rock now! Glad you had fun!

I love Dark & Stormy's! We'll have to make those when we go RVing this summer ;)