For three years now, our Memphis veggie club Food Awareness has hosted a Worldwide Vegan Bake Sale. If you're not familiar, Worldwide Vegan Bake Sale is a global event, and groups all over the world host sales during a week at the end of April. Each group raises money for the animal charity (or any charity, I guess) of their choice. We always pick the Humane Society of Memphis & Shelby County because they do great things for local animals. We had this year's sale on Friday night! 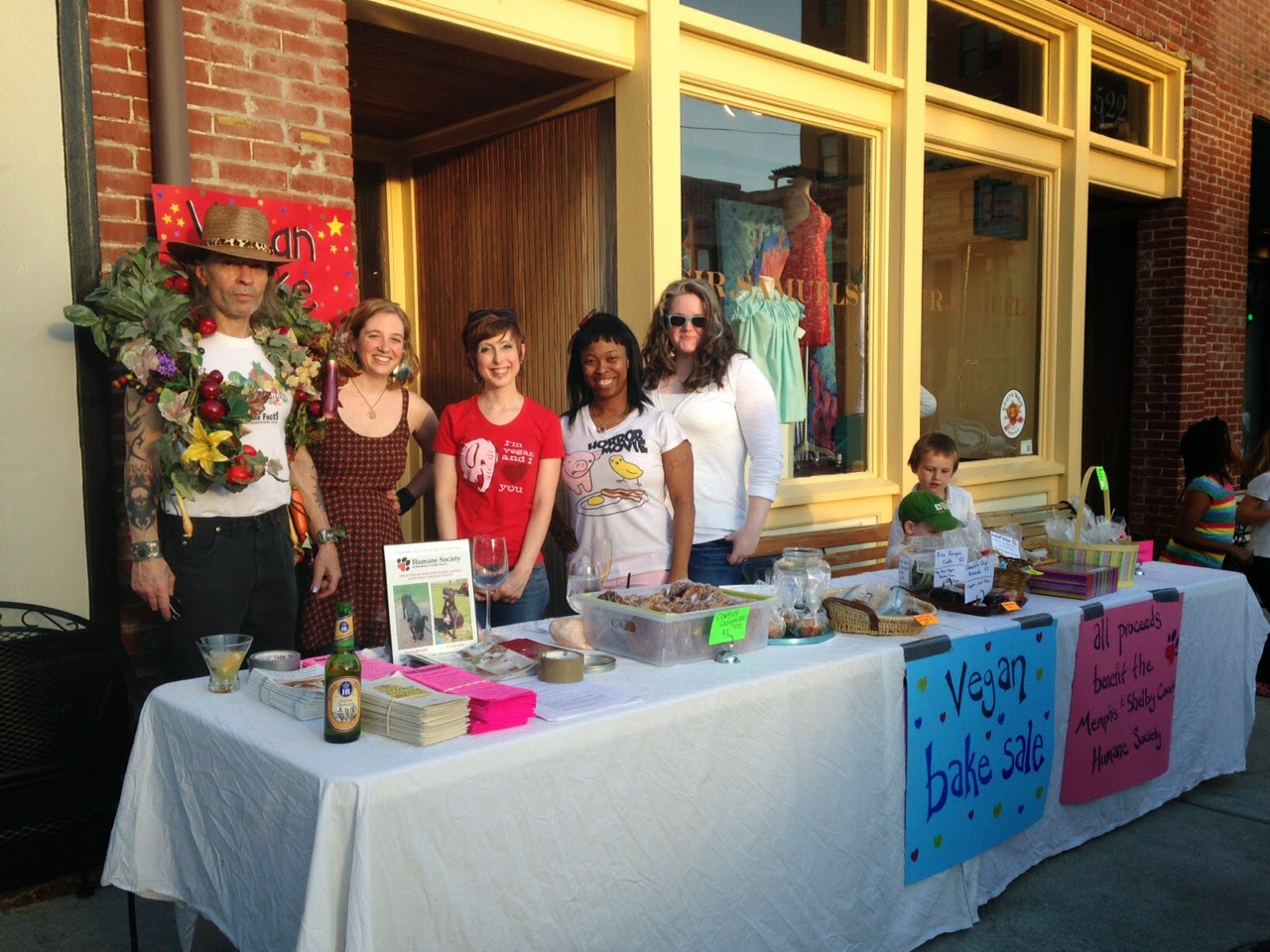 Lucky for us, the bake sale dates always fall during the week of the South Main Art Trolley Tour, a monthly free art walk on the last Friday of each month in the South Main neighborhood. It's always a big event when the weather is nice since galleries offer free wine and art shows. A veg-friendly German restaurant on South Main, Grawemeyer's, lets us use the space in front of their storefront. And then people stroll by as they're checking out galleries.

In these three years of hosting sales, I've never encountered anyone questioning the deliciousness of vegan baked goods. Most people seem excited that the goods are vegan, and they're even more excited to help out a good cause. This year, we raised $400! That's less than the past two years ($700) but not for lack of business. In fact, we almost sold out this year, and we usually have lots leftover. But somehow, we ended up with less donated baked goods than in year's past. Some folks were out of town, and some just didn't bake.

Nevertheless, we had some delicious stuff this year!! And I'm so grateful for everyone who baked and helped out just by being there and buying stuff. I made Chocolate Chip Cookies from Chloe's Vegan Desserts. These were buttery and chewy, just like I like 'em. I may have found a new to-go chocolate chip cookie recipe. 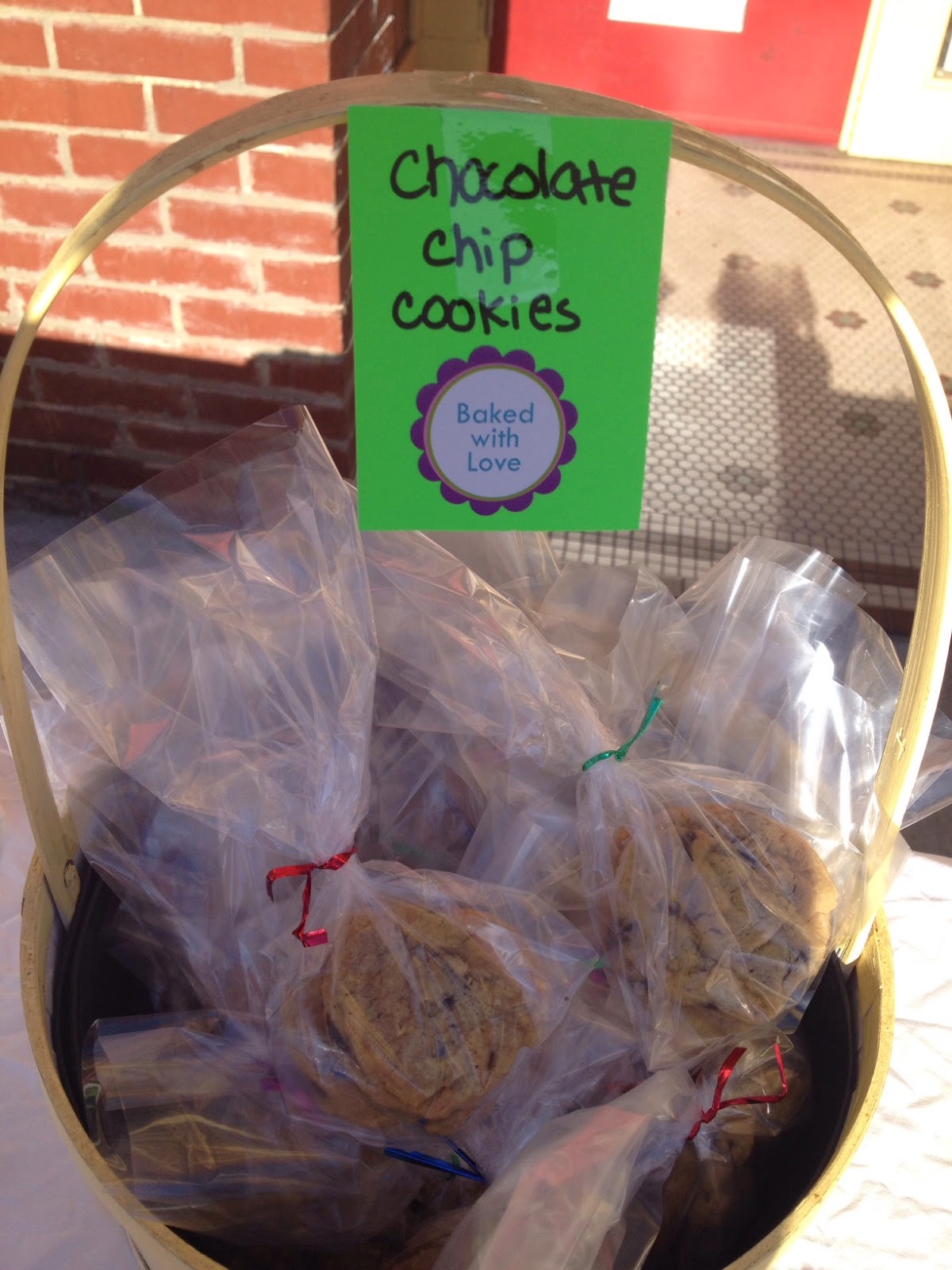 I also made the Cool Lemon Cookies from Vegan Food Gifts. I made these last year, and they were a hit. So why change a good thing? These lemony gems are rolled in a mixture of powdered sugar and lemon Kool-aid mix. 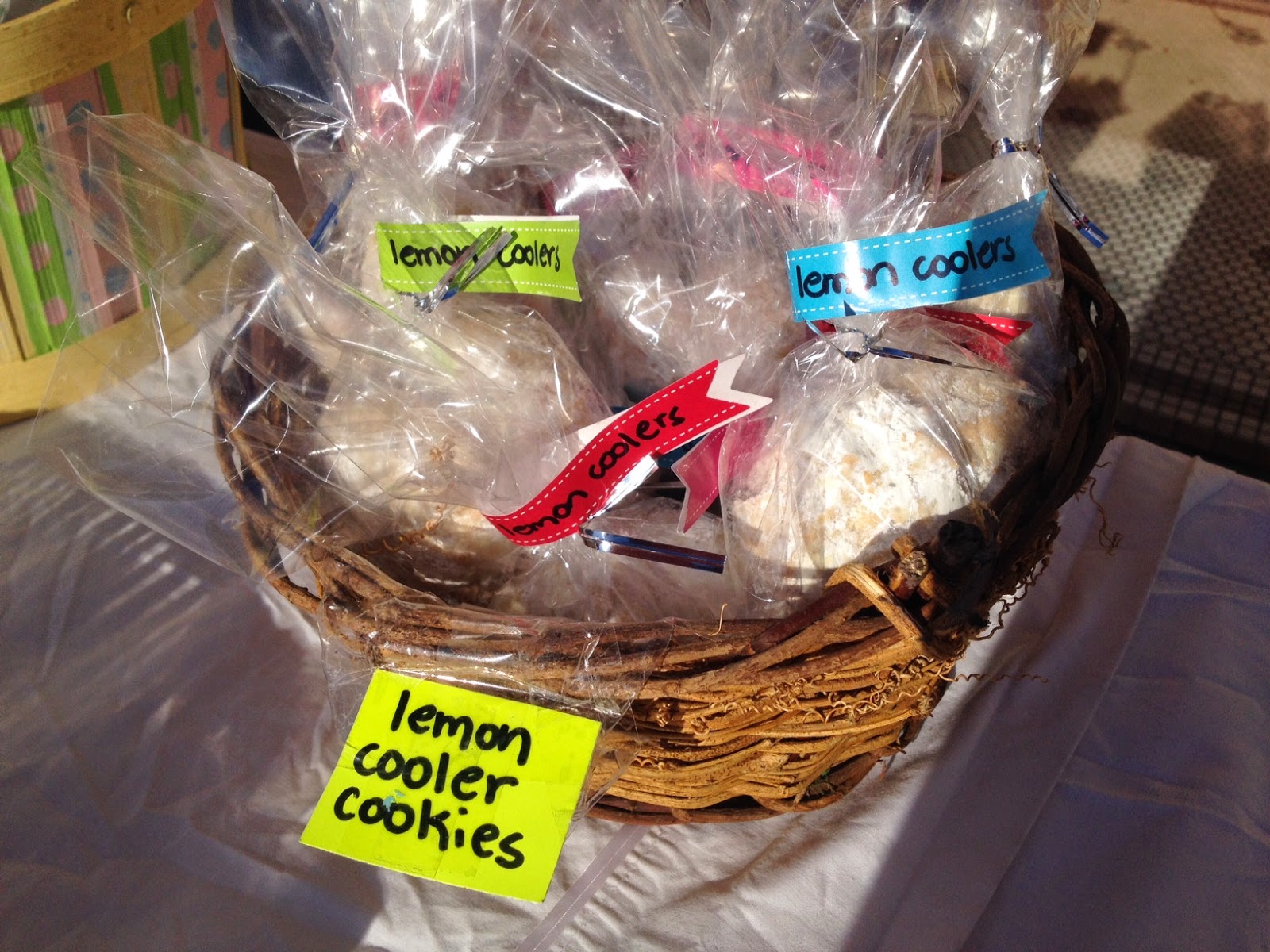 And on the savory side, I made the Tomato Rosemary Scones from Vegan Brunch. These are one of my very favorite recipes in that book! And they were a hit this year. Next year, I'm gonna make more savory stuff. 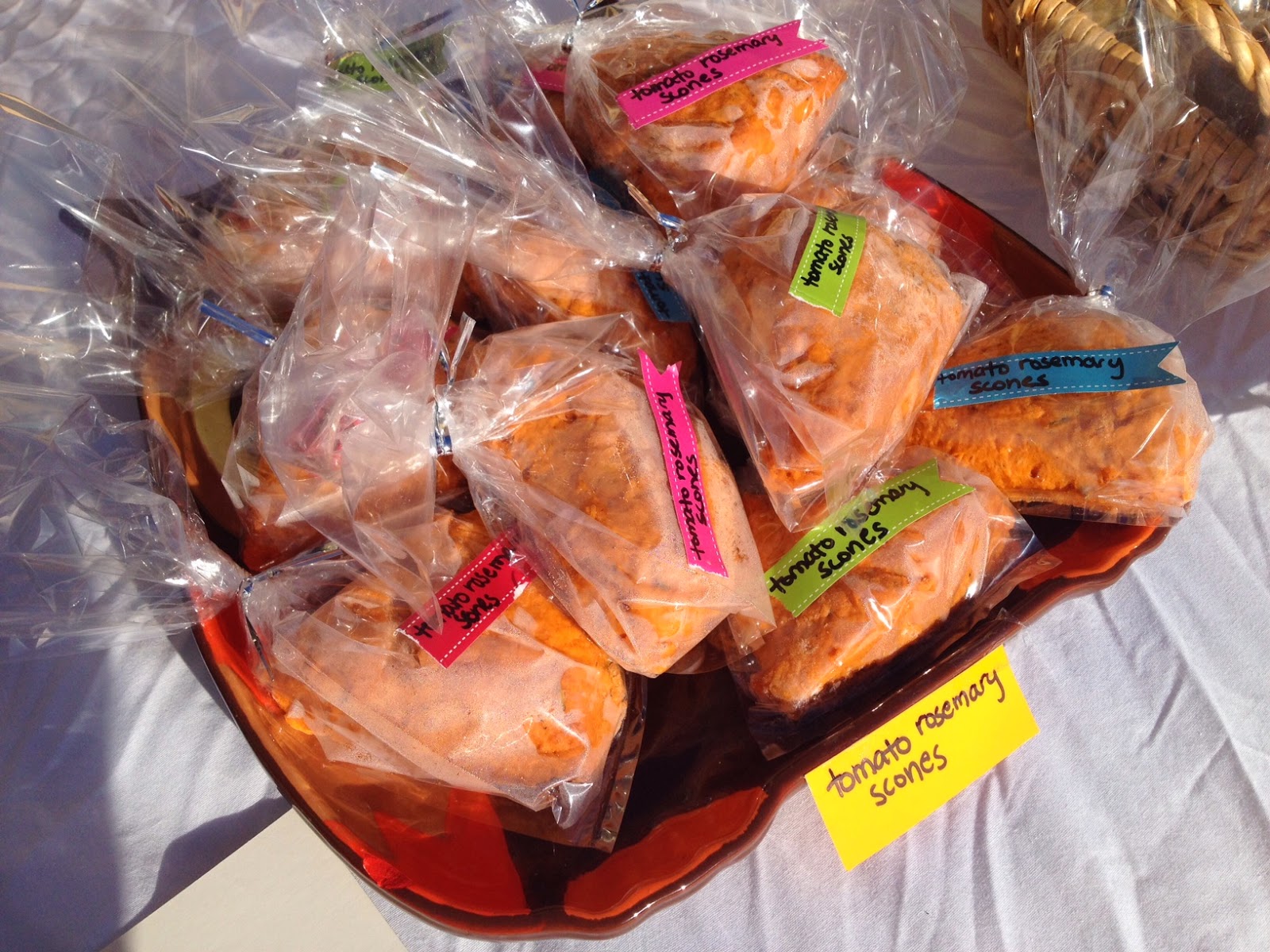 Stephanie, who actually bakes for a living with her vegan baking company Swell Baked Goods, made cookies too. She packaged Chocolate Chip, Peanut Butter, and Kitchen Sink Cookies from Vegan Cookies Invade Your Cookie Jar in little bags. The peanut butter ones were my fave! 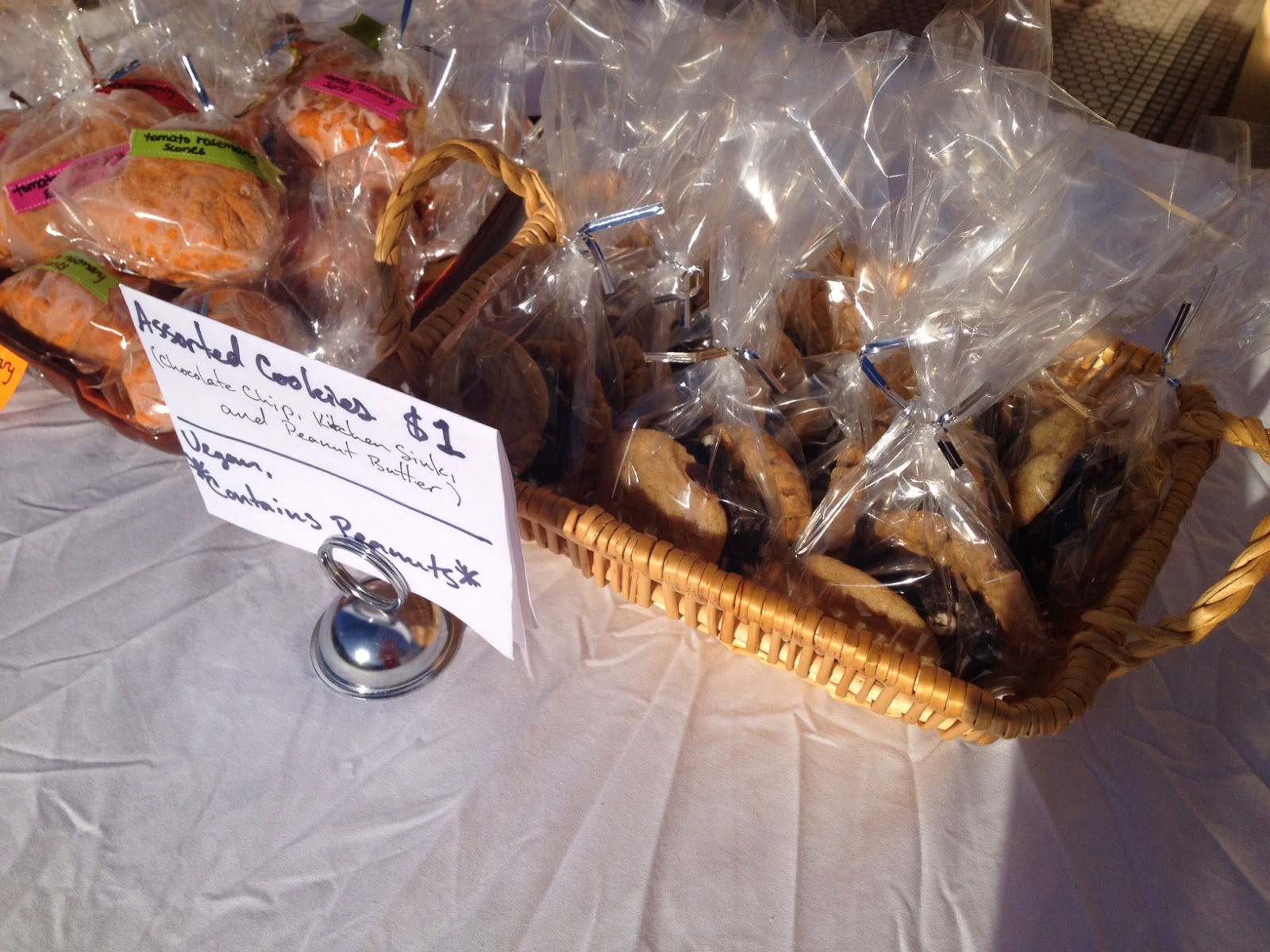 And she made Brownies (which I didn't get to try before they sold out) and Rice Krispie Treats. And the Rice Krispie Treats have sprinkles!!! Best idea ever. 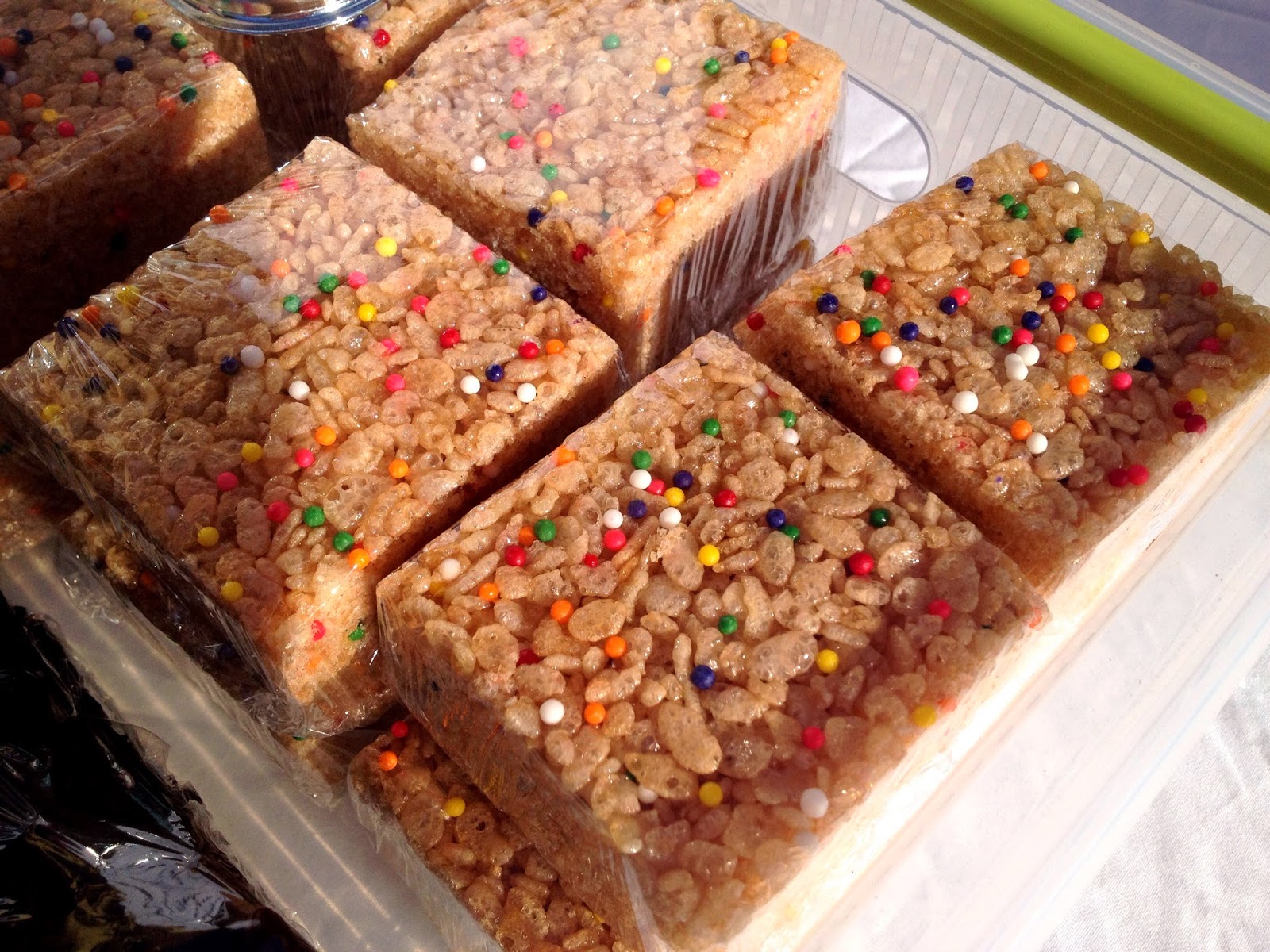 Cassi of The Pretty In Pink Vegan made a recipe from her cookbook, which has been submitted to publishers. These were her Pantry Cookies, made with stuff you probably have in your pantry — cocoa, almonds, and coconut. Super good! She fed us these a few weeks ago when she was testing the recipe out again, and I really wanted to eat more than one. Soft, cakey, pillowy cookies! Also, check out her very Cassi-esque diva stickers. Only Cassi. 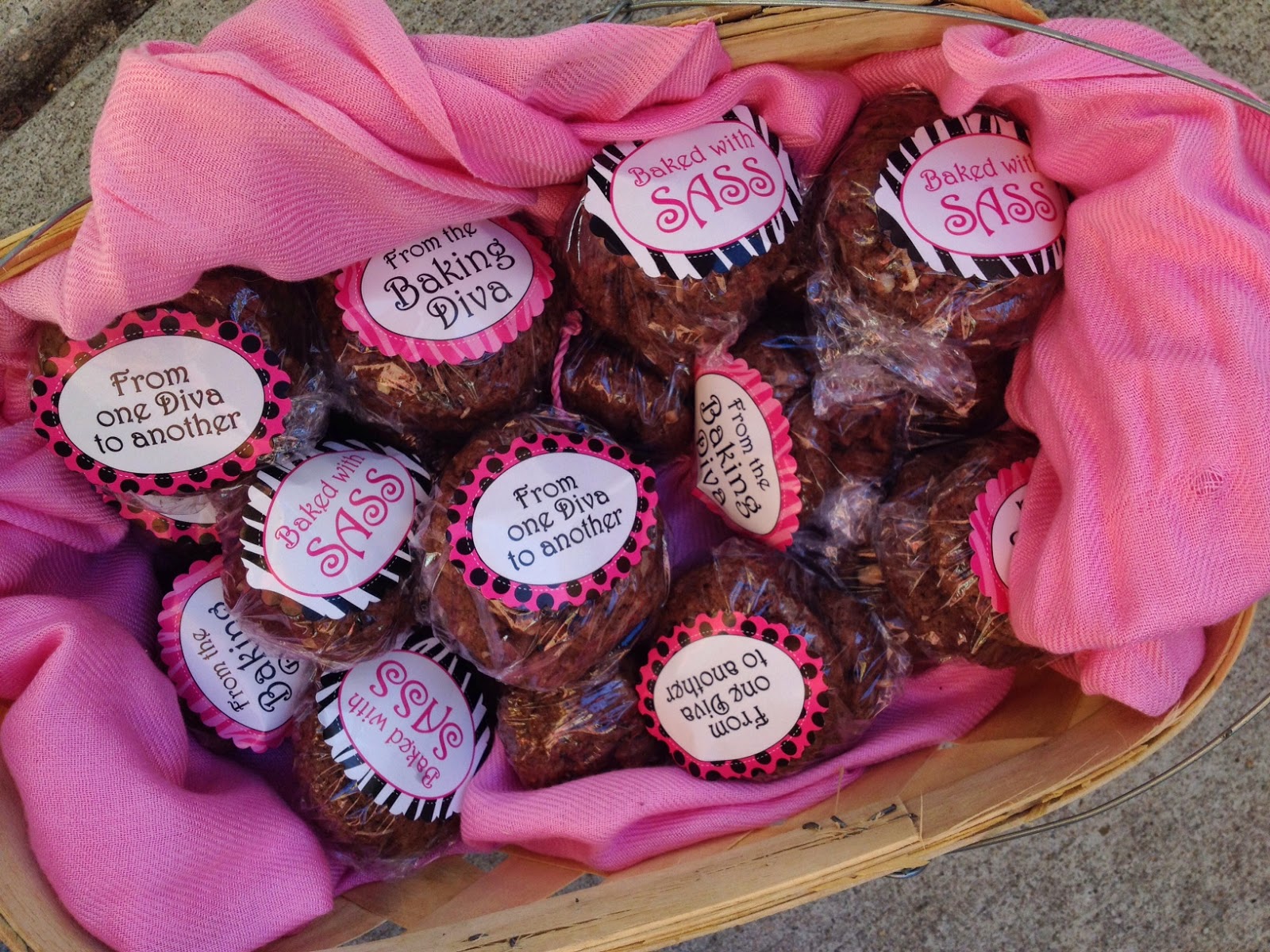 Meagan made giant Cowboy Cookies!! And she made a TON! I was able to take a few home at the end, and I ate one today. So good. Chewy, oaty, chocolatey goodness. 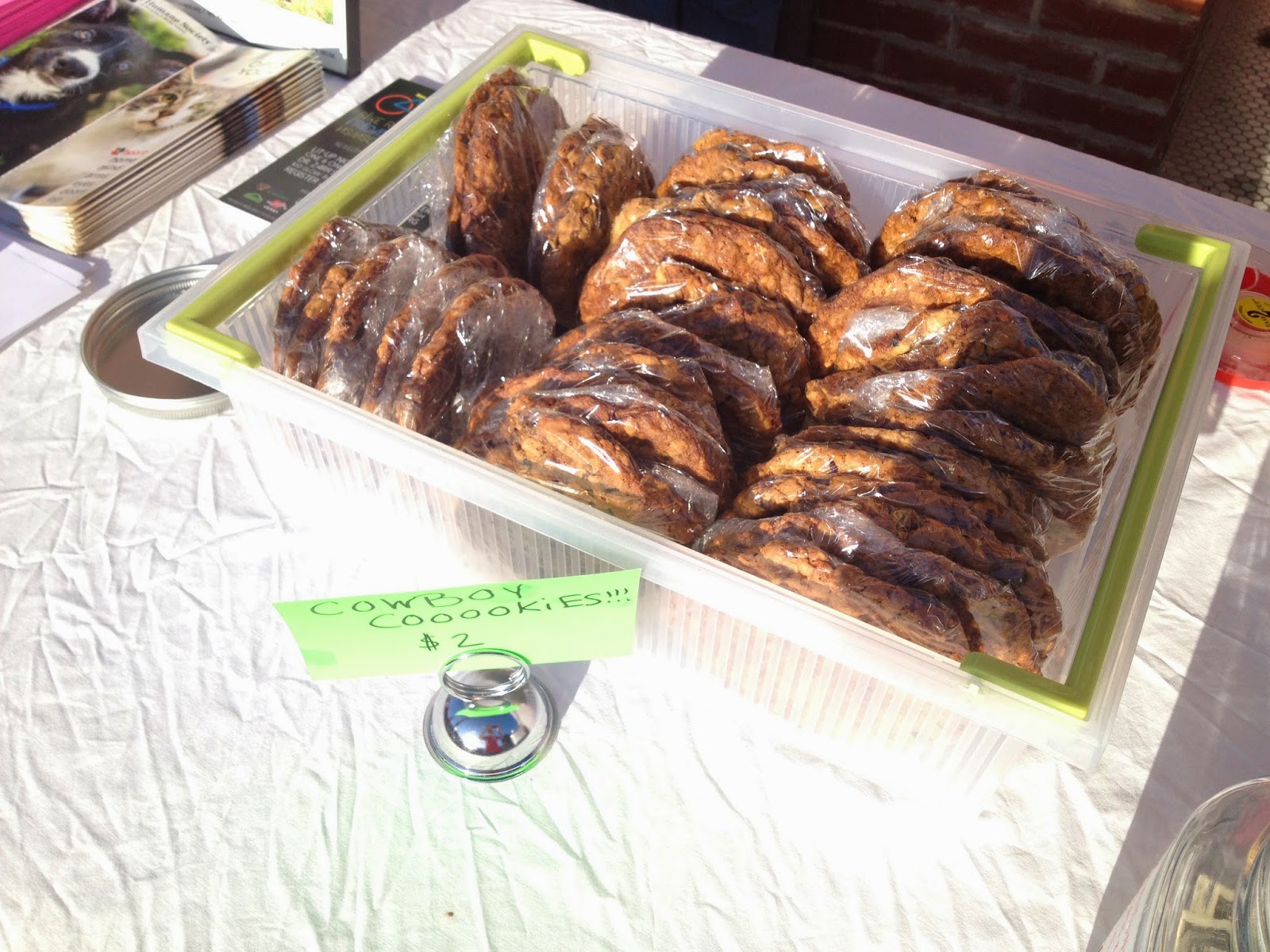 Dawn made Peach Raspberry Champagne Bars, and I had one of these yesterday. The crust had oats in it, and these reminded me of healthy cereal bar but with decadent sugary jam filling. Perfect with a glass of almond milk. 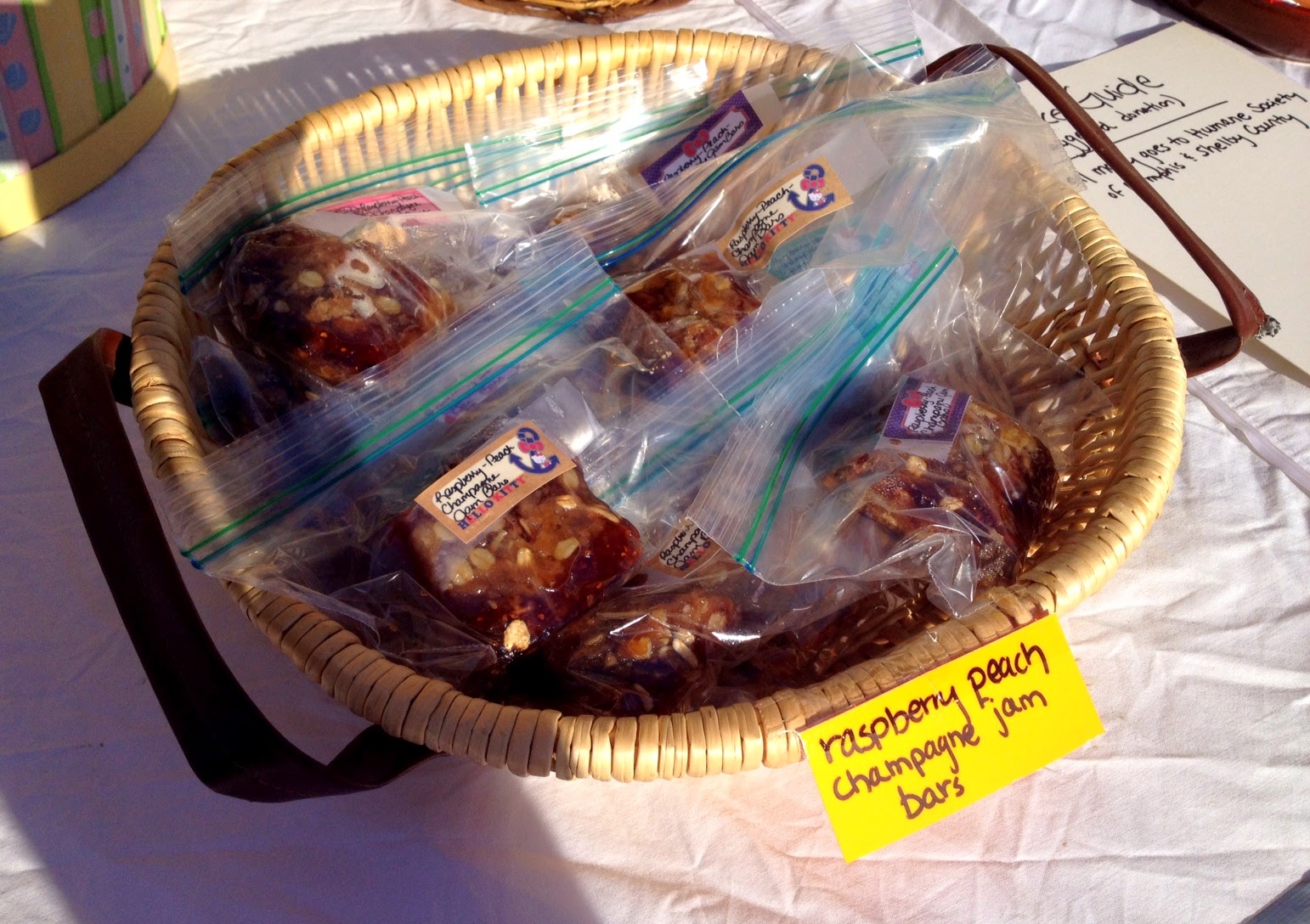 Vivian made Chocolate Peanut Butter Whoopie Pies. I was snapping a picture of them in their box, and I couldn't resist the peanut butter aroma. I had to buy one and devour it immediately at the bake sale. Yum! 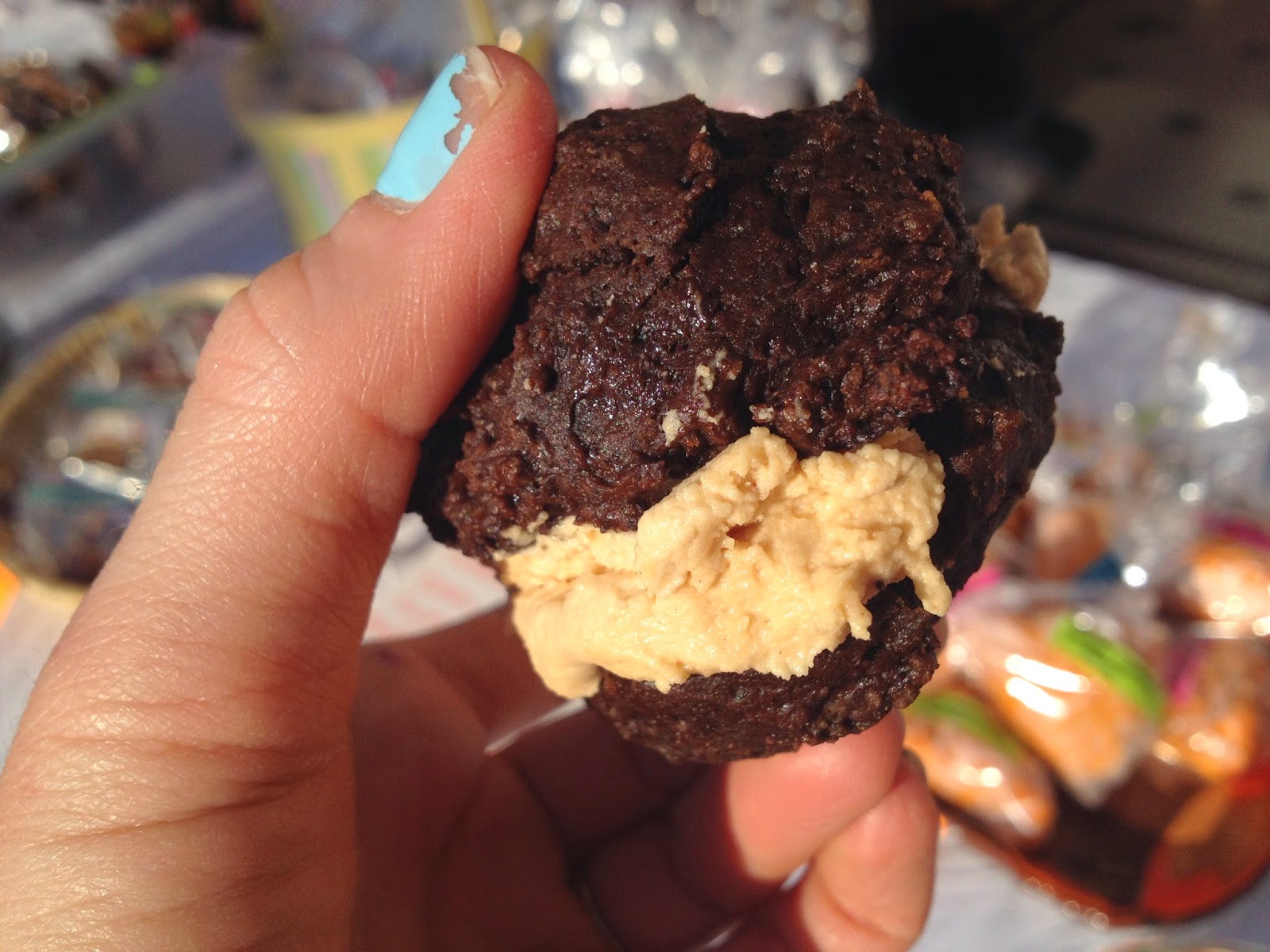 She also made Banana Chocolate Chip Muffins, but they were gone before I could try one. 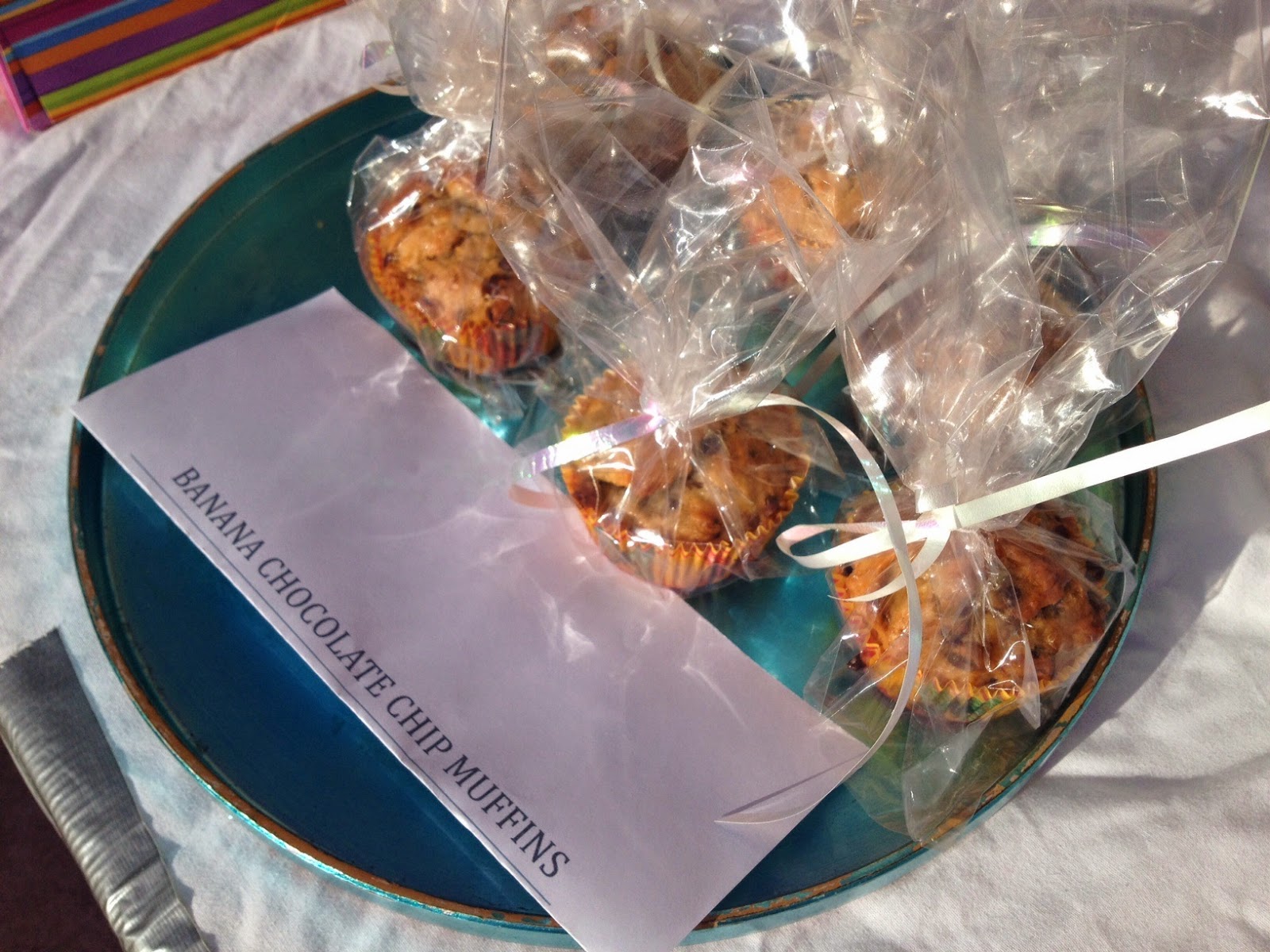 Since we held the bake sale for the Humane Society, Food Awareness member/Humane Society marketing guru Katie brought an adoptable dog. Her name was Bree, and she was just the sweetest little pit bull you've ever met. 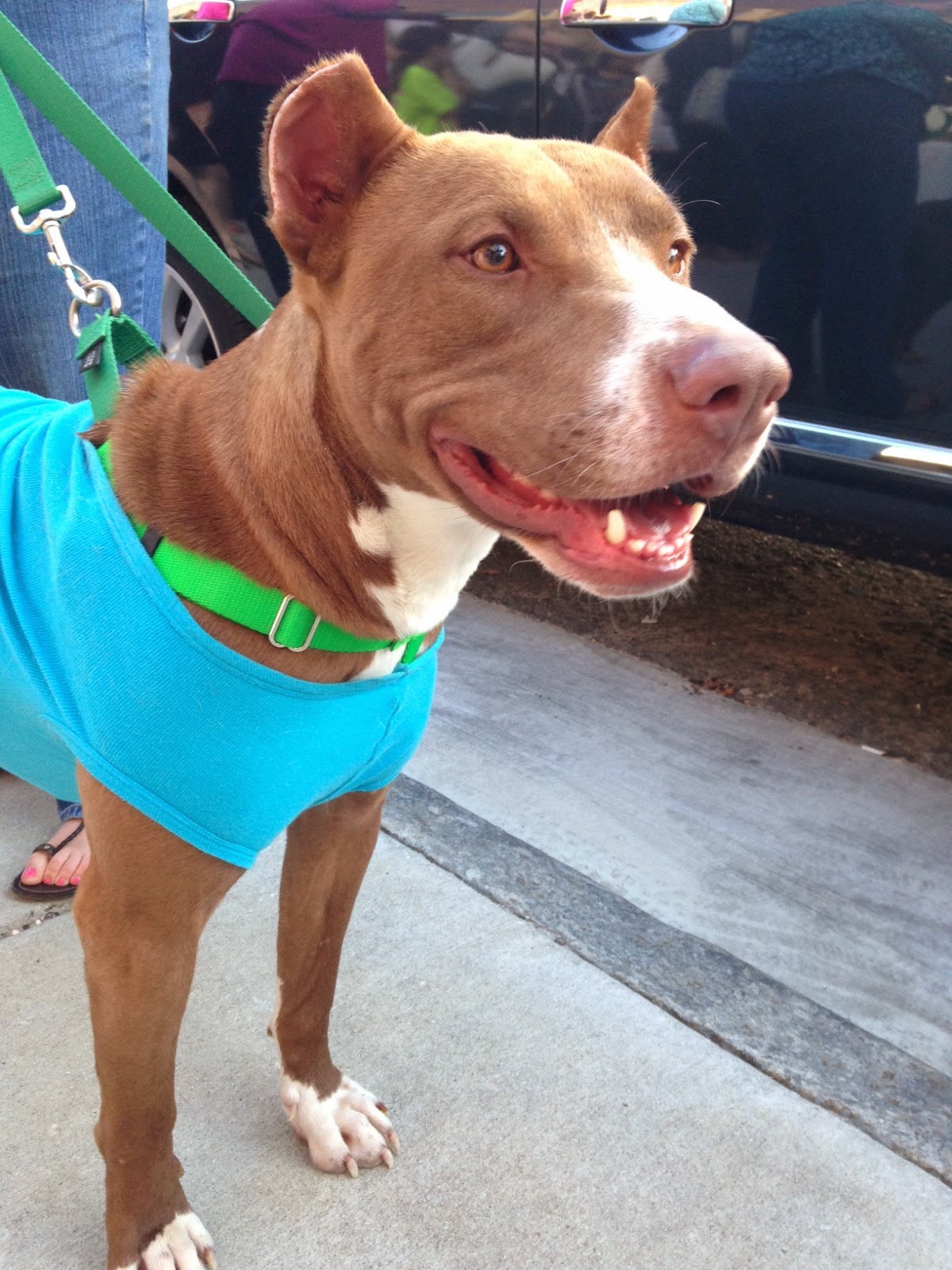 So well-behaved. She didn't even try to steal our baked goods. By the way, if you're local and interested in adopting Bree or any pup (or kitty) from the Humane Society of Memphis & Shelby County, check out their website.
Posted by Bianca at 10:35 PM

Well done, it looks amazing. :) So many yummy treats.
I also ran a WWVBS in Brisbane on Sunday, it was a lot of fun. :)
We didn't raise as much money this year as last year either, but our chosen charity was stoked with the amount raised, it all helps. :)

Many, many thanks from all of us at the Humane Society, and from Bree, who had a great time and slept all the way home. :)

yum! everything looked so great!

This is too cool! Wish there was something like that here!
Enjoy!

That certainly is an adorable Pitbull.
I like that you included savory scones amidst all the other sweets, not that I totally wouldn't be all over most of those sweets. I'm always all over a vegan brownie, but the peach champagne bars sound awesome too!

Yay! Congrats on the awesome bake sale! I love those tomato scones too, so delicious!

Everything looks amazing! Thanks for all this awesomeness!