As promised, I'm back with Friday and Saturday's meals from Seattle. I'll blog about Sunday and Monday's meals tomorrow. To see my recap of Seattle VegFest, the reason I went to Seattle, check out last night's post.

I arrived in Seattle on Friday around 11 a.m., and my publisher Bob and his son John picked me up at the link line train station. Bob informed me that we were going straight to lunch at one of the places on my must-eat-at-in-Seattle list — Bamboo Garden! This totally vegan Chinese restaurant has a massive menu of plant meat-based dishes. And y'all know how I love my "meat." 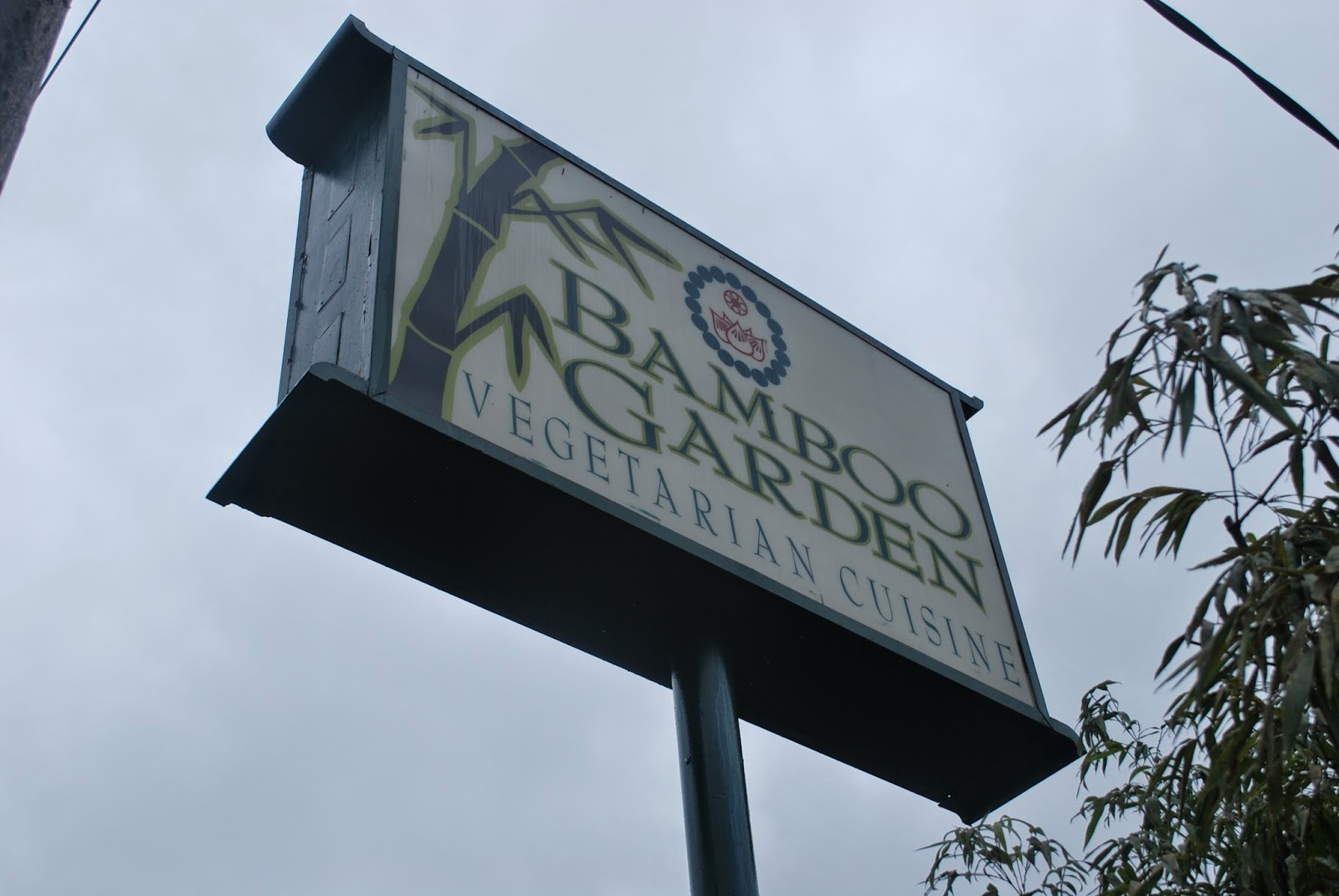 Since it was lunchtime, we got to order off the lunch combo menu. It allows you to sample several dishes for a cheaper price. And it comes with soup. I chose the Hot 'n' Sour Soup because vegan hot and sour soup! 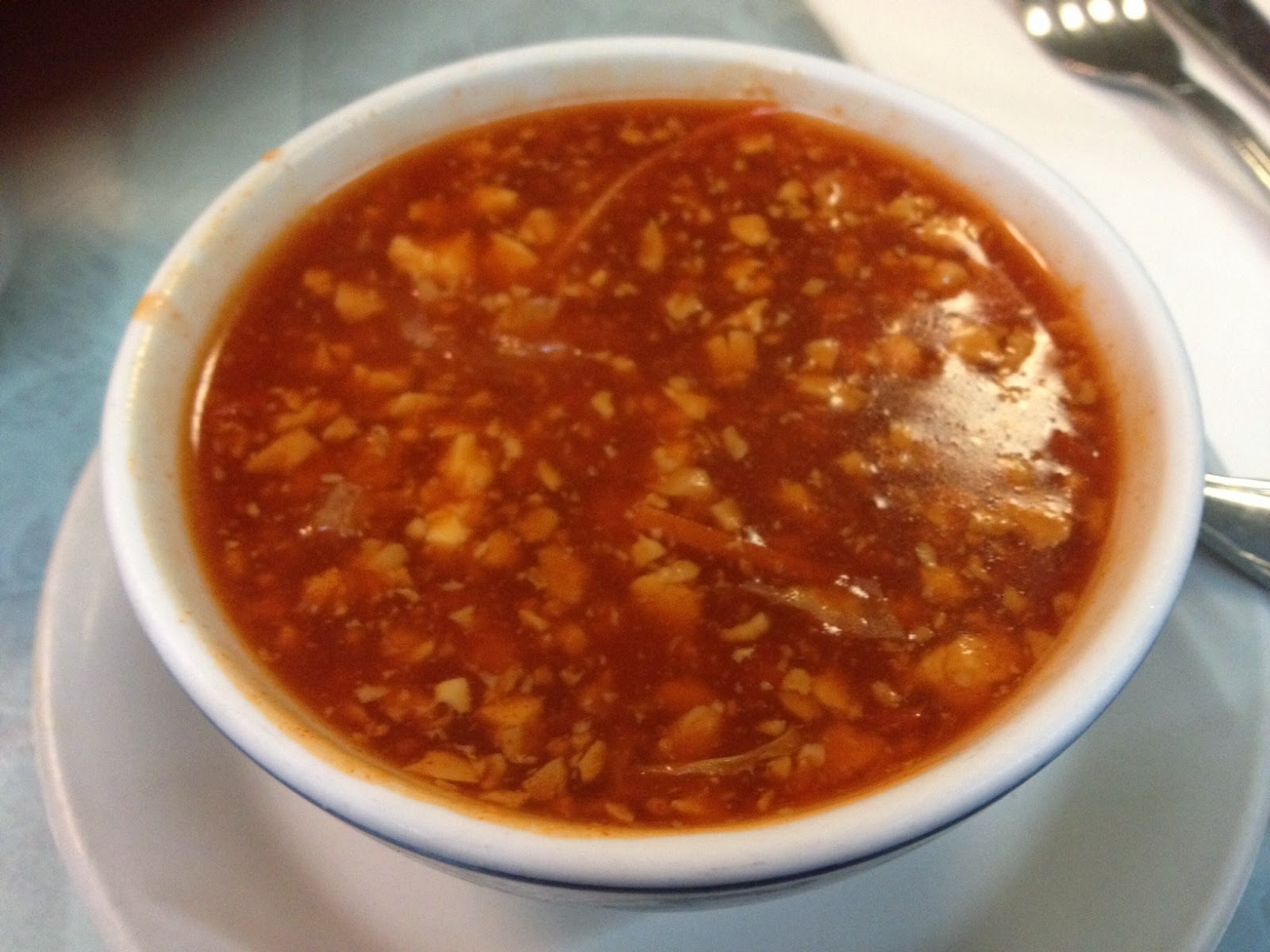 And then I dove into this massive plate of vegan Chicken Fried Rice, vegan Mongolian Beef and Chow Mein, Stir-fried Veggies, and a Potsticker. The whole plate was fantastic, but I was especially impressed with the fried rice. There are few meals more comforting, especially after a six-hour plane ride, than perfect fried rice. Because there was so much food here, I ended up taking some back to my hotel and eating this for breakfast for two more days! 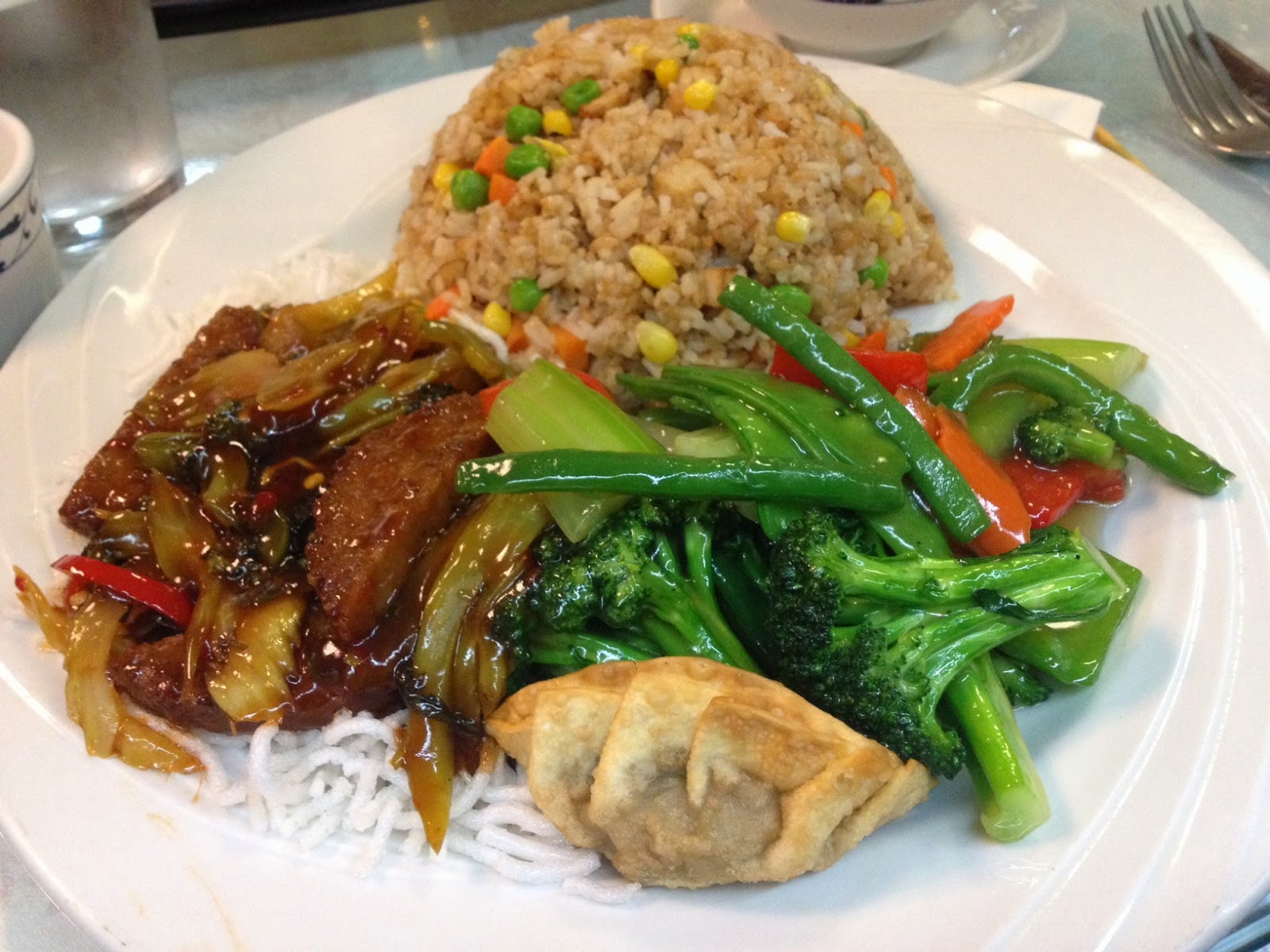 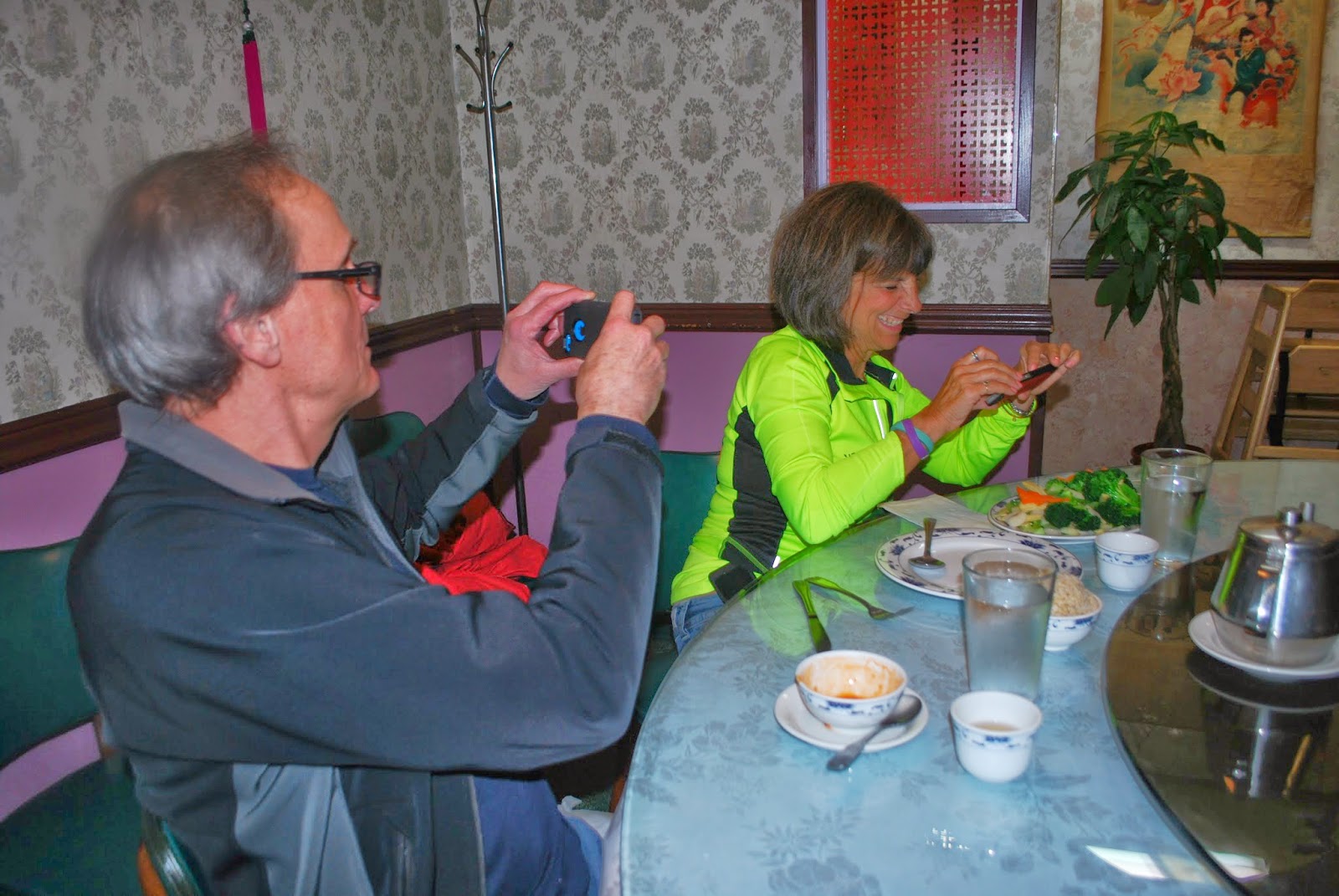 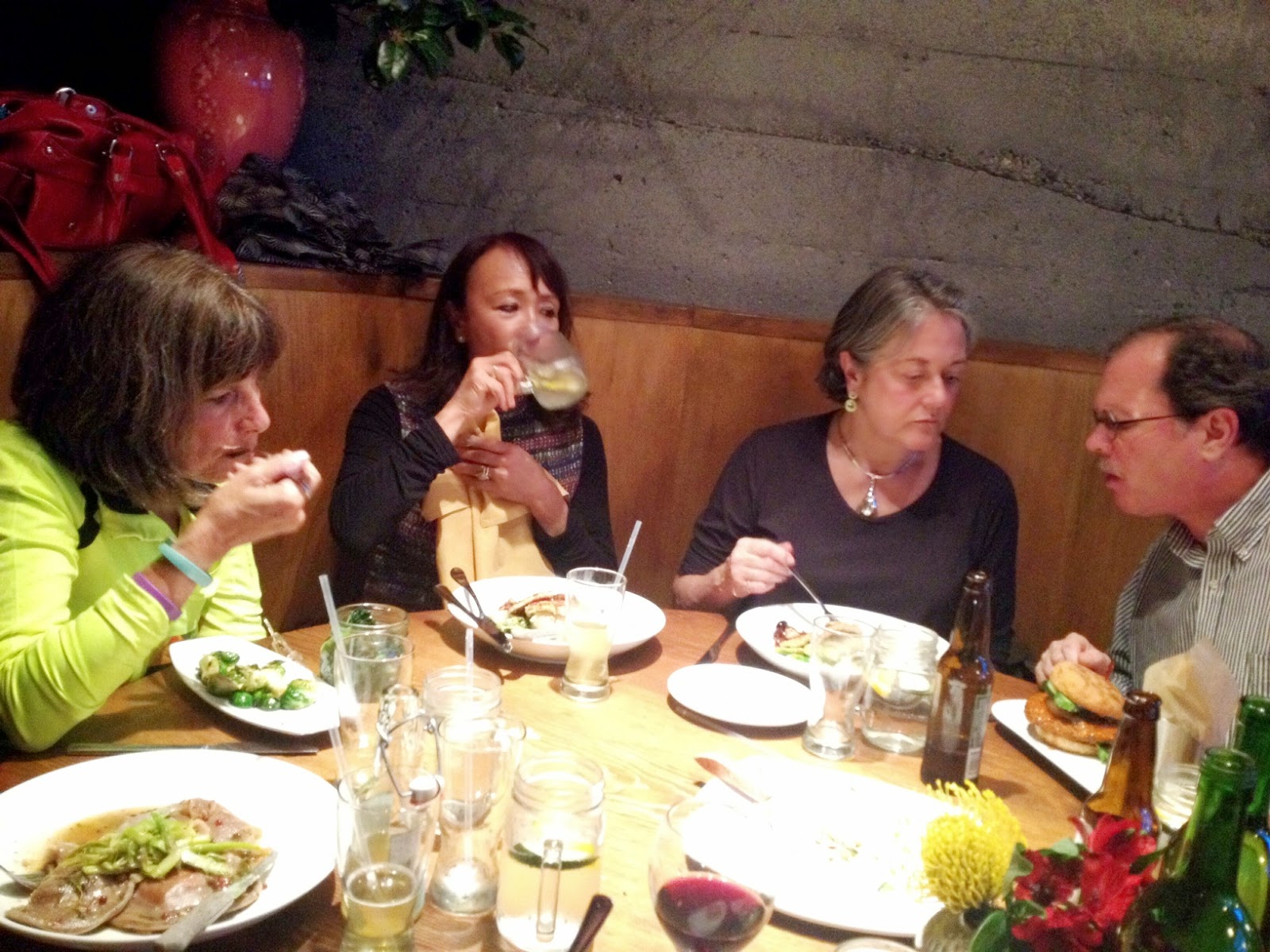 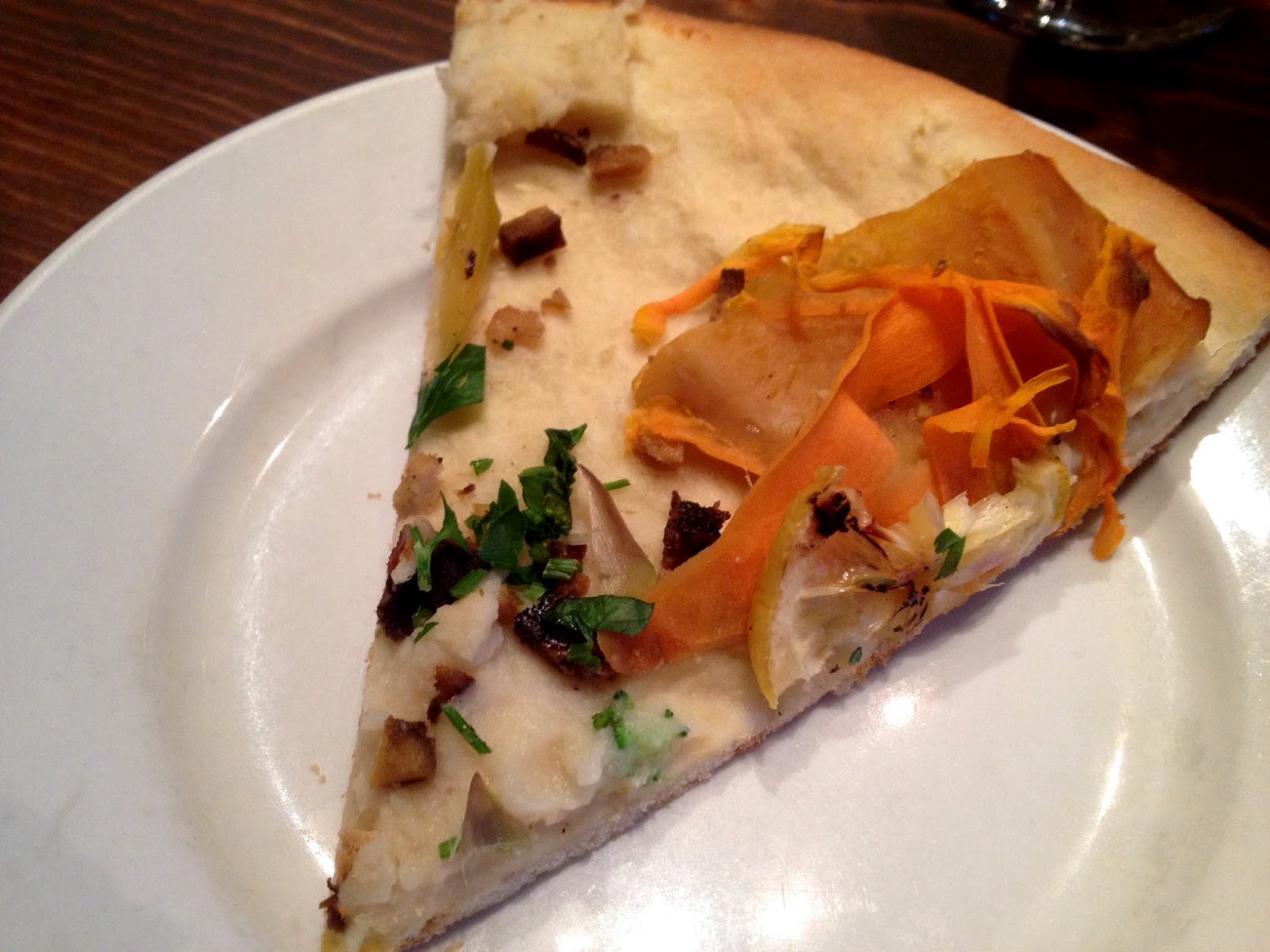 And Alan ordered the Avocado Roll for the table as well. Each roll was stuffed with chipotle aioli, carrots, asparagus, pickled cabbage, and red onions. Definitely the tastiest sushi I've ever had. Seriously. 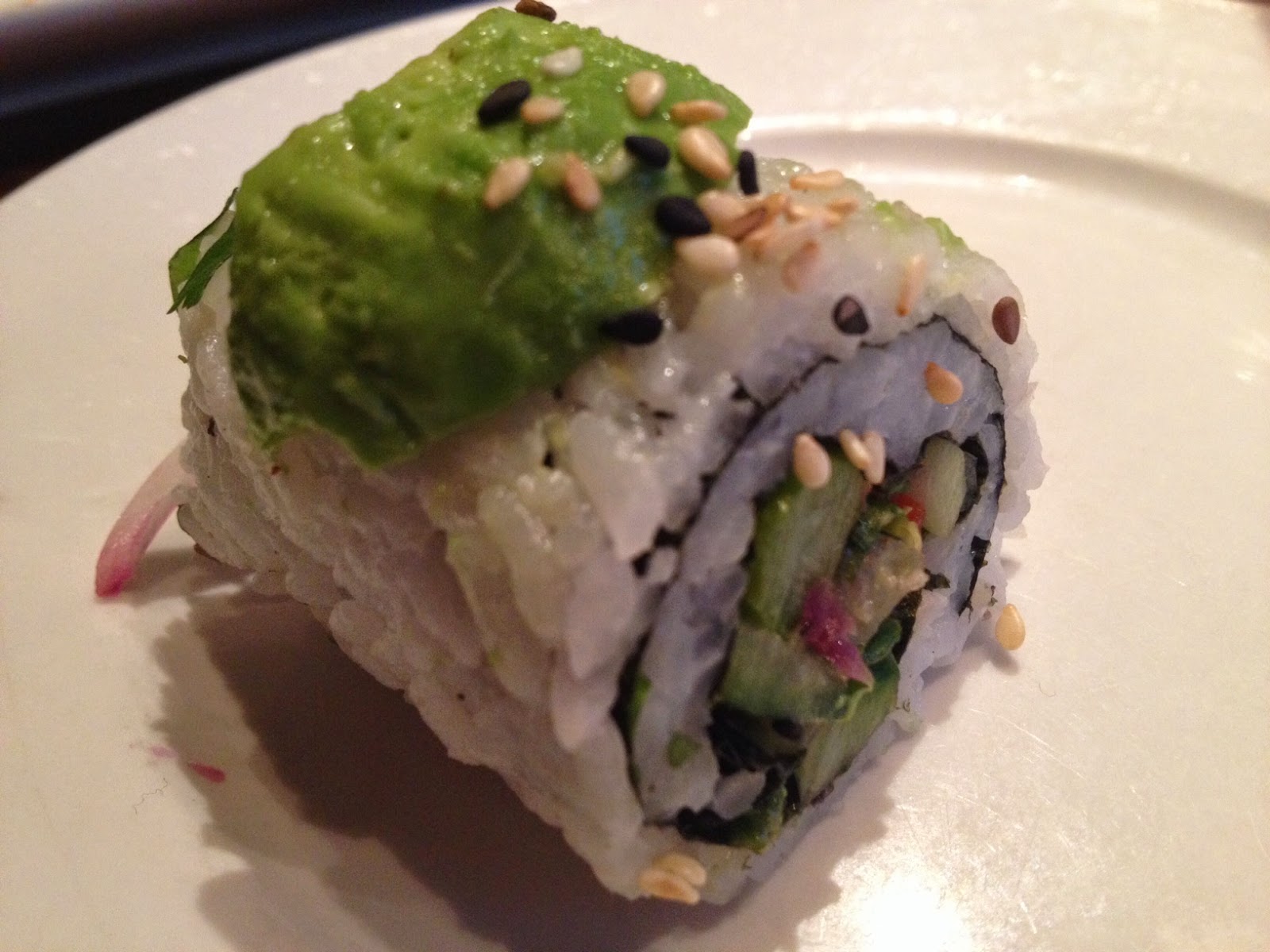 Plum Bistro is famous for its Mac 'n' Yease, so rather than chose an entree plate, I ordered a la carte so I could try it. I went with the Spicy Cajun Mac 'n' Yease. Holy hell. I've eaten a ton of vegan mac 'n' cheese in my day, and this was the best stuff ever!! It was delightfully fatty in just the right way. And oh so creamy. You can barely even see the pasta in this pile cause there's almost more sauce than pasta. I'm definitely a saucy gal, so I like my mac to be super-creamy. The recipe is supposed to be in the Plum Bistro cookbook, which I will now have to buy just for this. 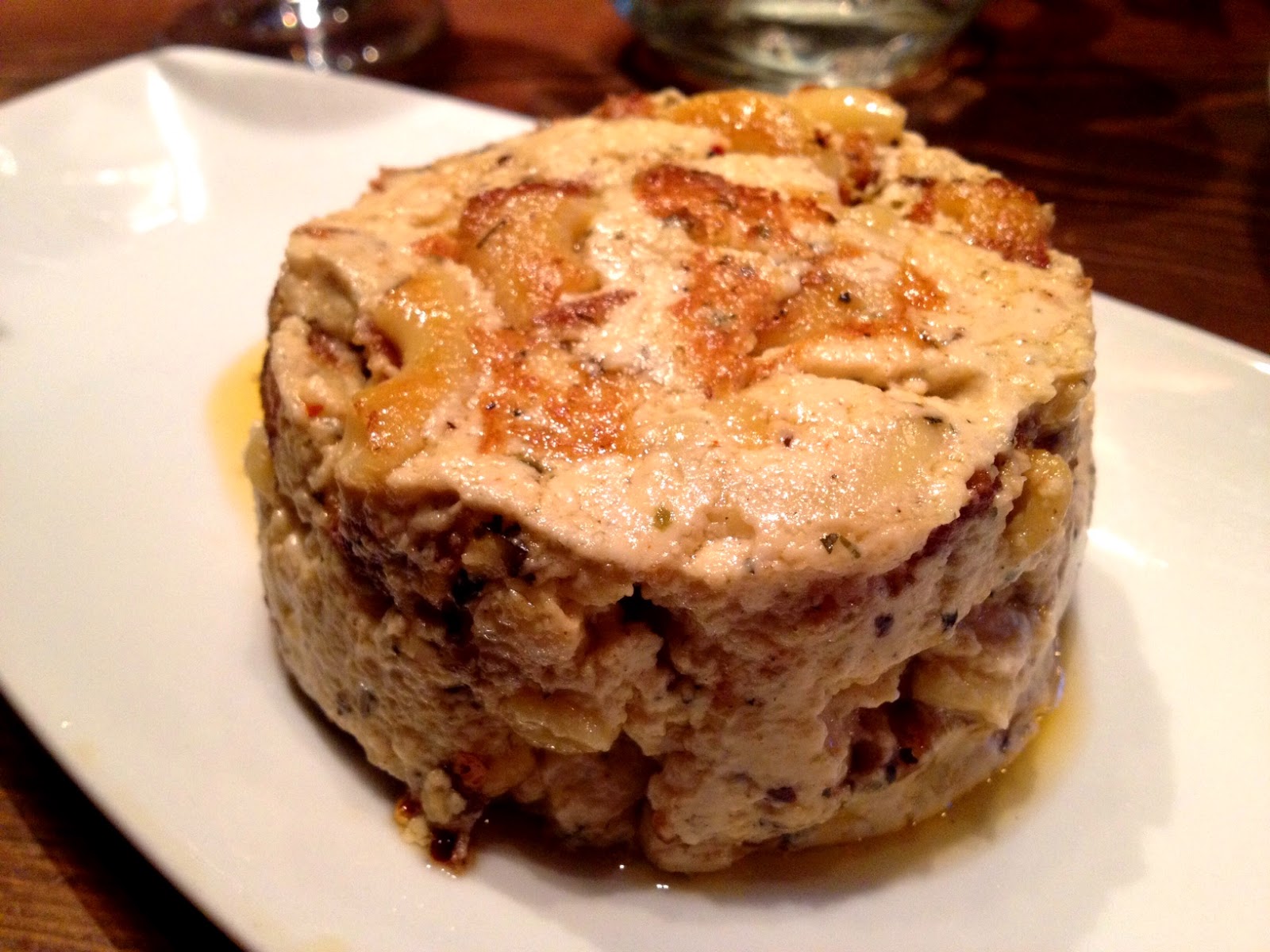 I also ordered the Smoky Kale with spanish almonds, smoked tofu, and roasted garlic. And it came served in a mason jar! Everything tastes better in a mason jar. And this kale was no joke. Plum makes some phenomenal food. On Saturday, I reheated a little fried rice in my room, but I kept my meal small. And that's a good thing because guess who showed up at my hotel room door with vegan pastry? Miyoko! She grabbed me a Vegan Raspberry Brownie Bite from Caffe Ladro when she went out for coffee. Isn't she the best? This little guy was super fudgey and flecked with raspberries. 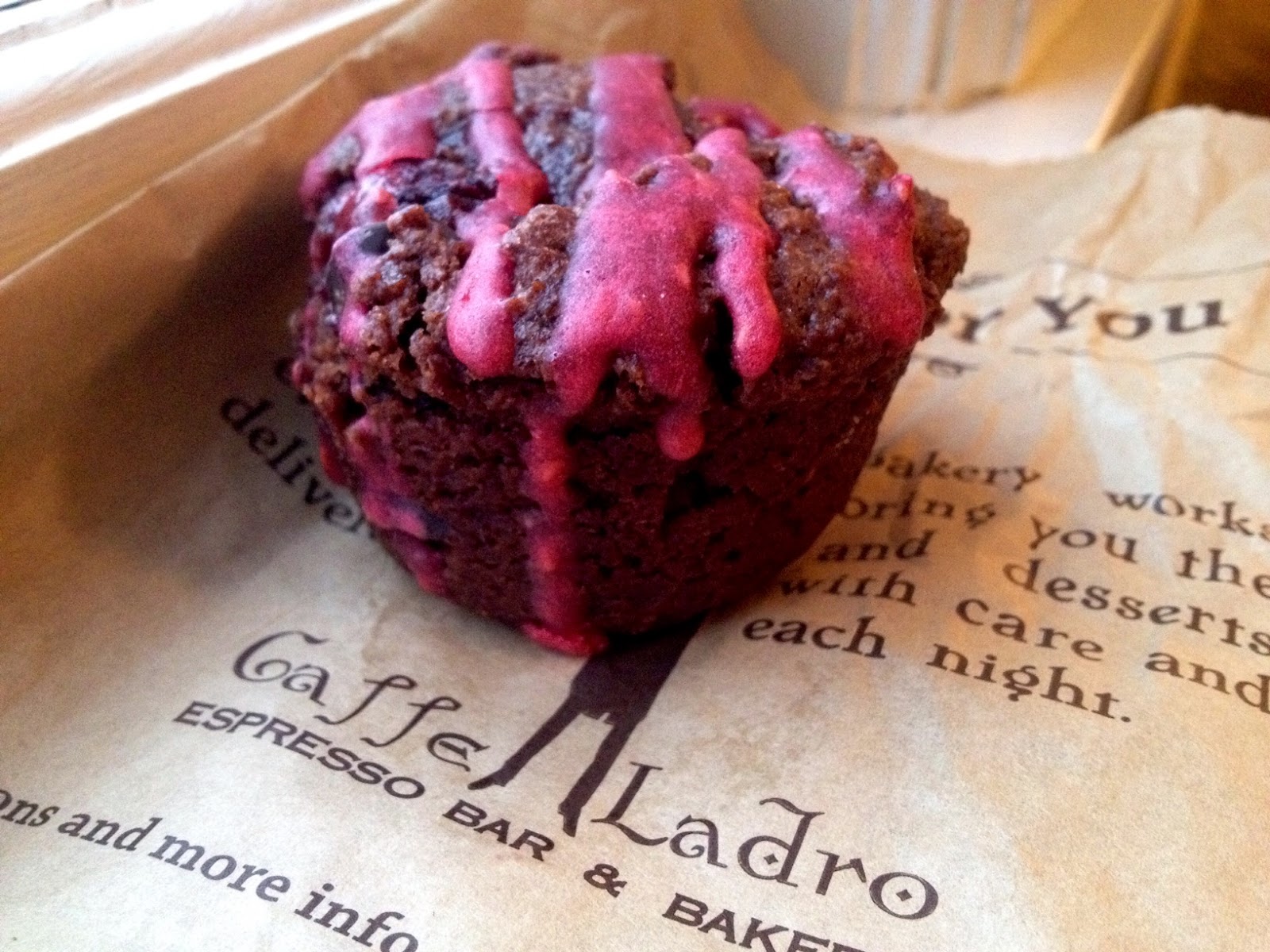 On the way to VegFest Saturday morning, I walked past a cute little coffee shop called Caffe Zingaro. I tucked in out of the rain and ordered an Amarellow Almond Latte (made with almond milk, amaretto syrup, and marshmallow syrup). Seattle is known for its coffee, and this cup was just lovely. I went back for more coffee there all weekend. The barista ladies were so nice! 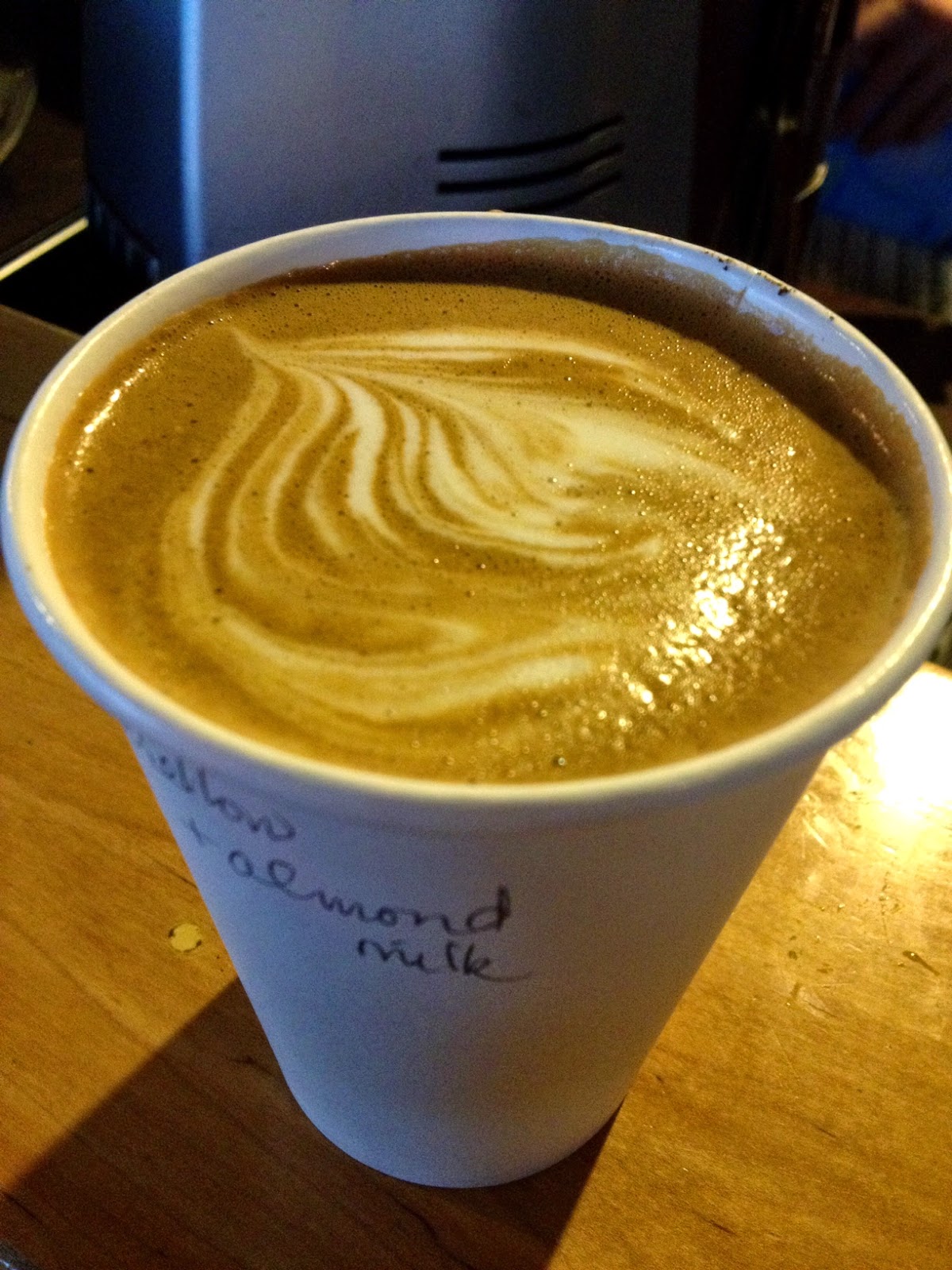 Lunch on Saturday was cobbled together from samples at VegFest, so I was pretty hungry when the fest was over for the day. After a little deliberation, Bob decided we should go to Sunlight Vegetarian Cafe. I'd never heard of it, and when I looked at the menu online, it looked like there weren't many vegan options. But Bob, who is a vegan, swore this place was great. And man was he right?! Plus, the place had beer, and a few of us needed a cold one after a long day at VegFest. I went with the locally brewed Scuttlebutt Porter. 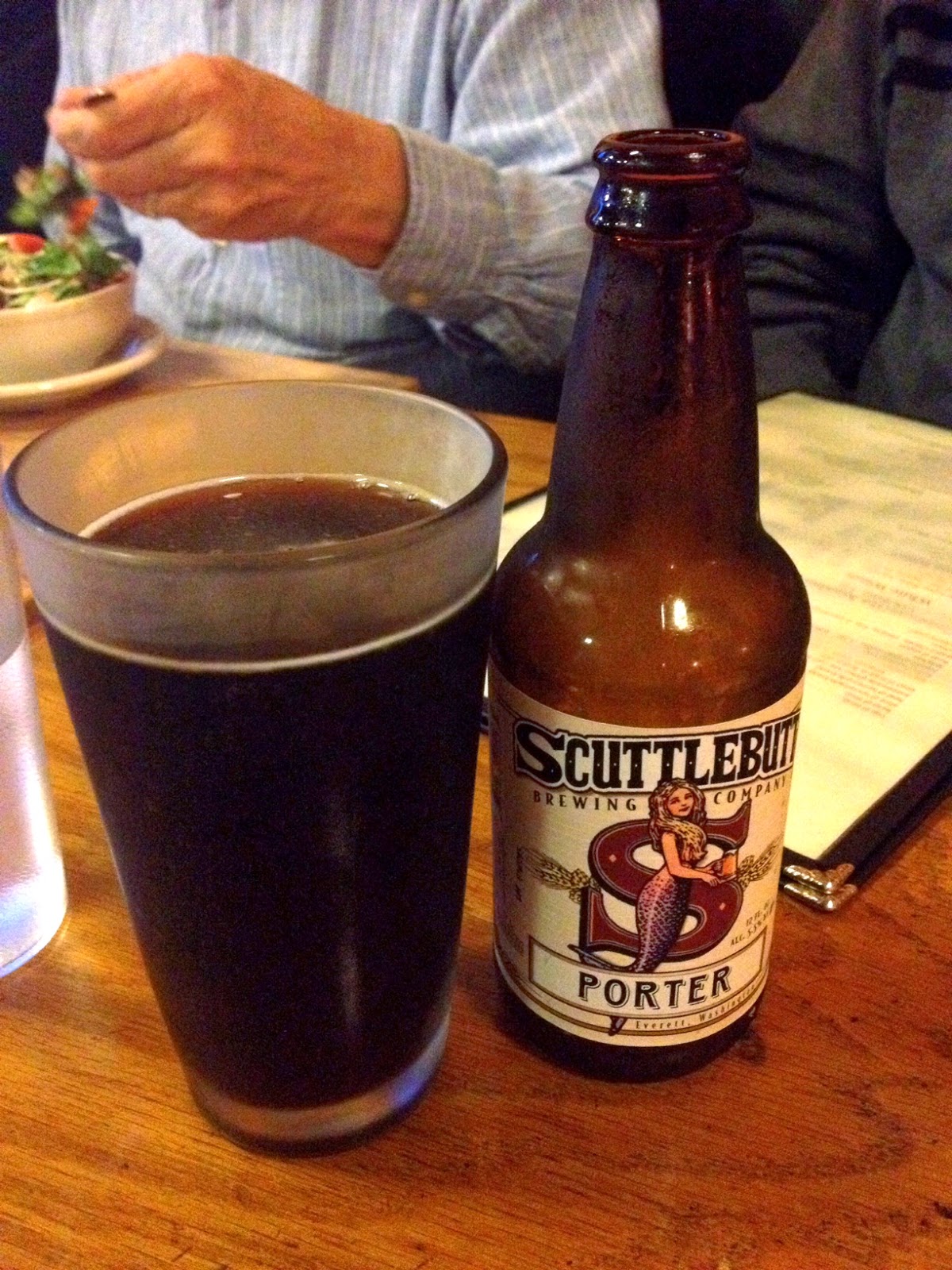 Bob had ordered the Grilled Tempeh Burger before on trips to Seattle, and he said he'd been thinking about it ever since. So we all ordered the same thing. This was topped with caramelized onions and red pepper sauce. 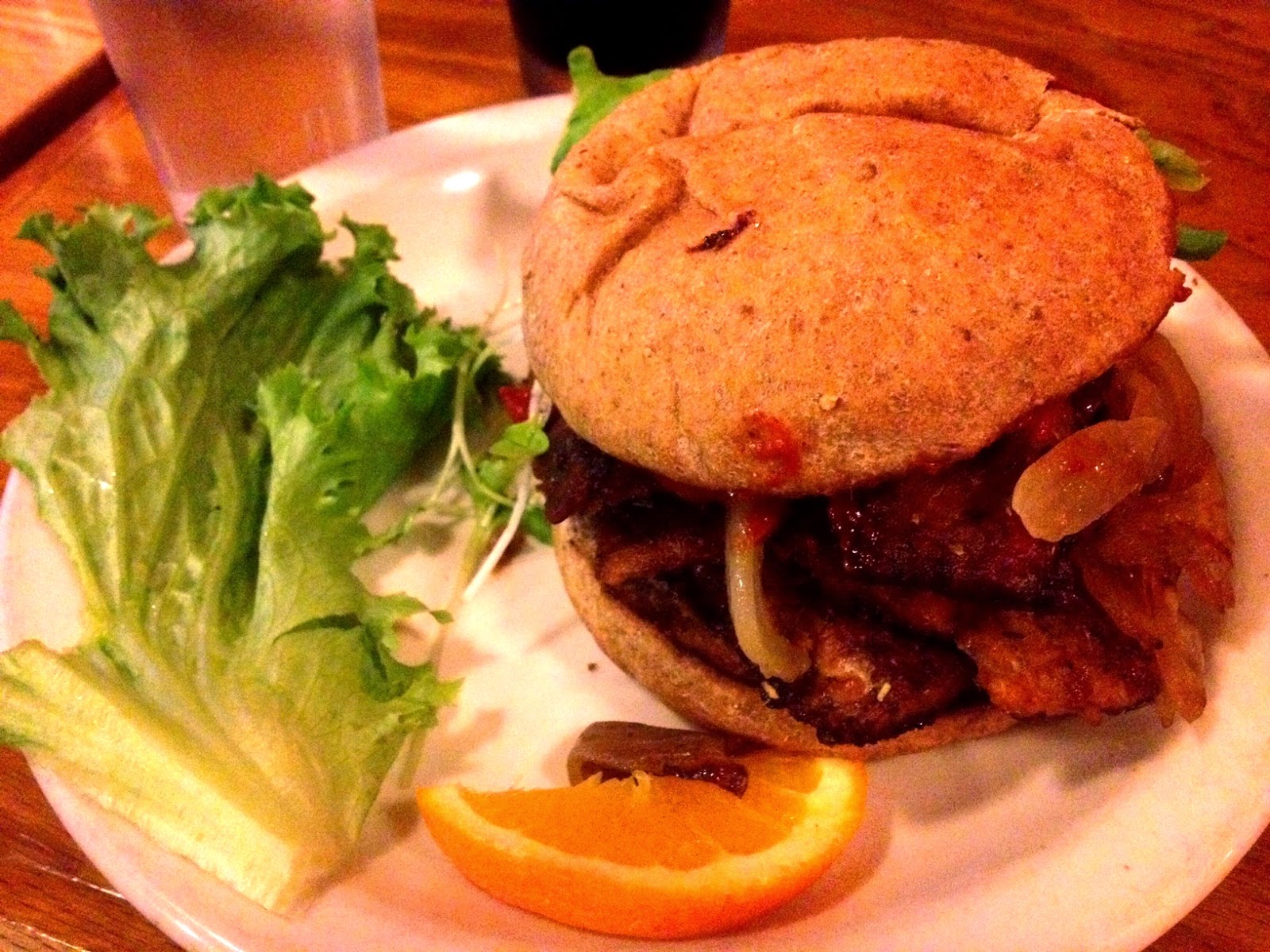 OMG! Alan declared this the best burger he'd ever eaten. I would say it's definitely the best tempeh I've eaten. Rather than a tempeh patty, this burger was made from thinly sliced slabs of blackened tempeh. It was thick and messy and delicious.

The burger didn't come with a side, but we all chose to order soups and salads. I went with the soup of the day — Smoky Sesame Mushroom Tofu Soup. This didn't disappoint either. It had a light smoky flavor, almost like vegan ham or bacon, and it was loaded with chewy tofu. 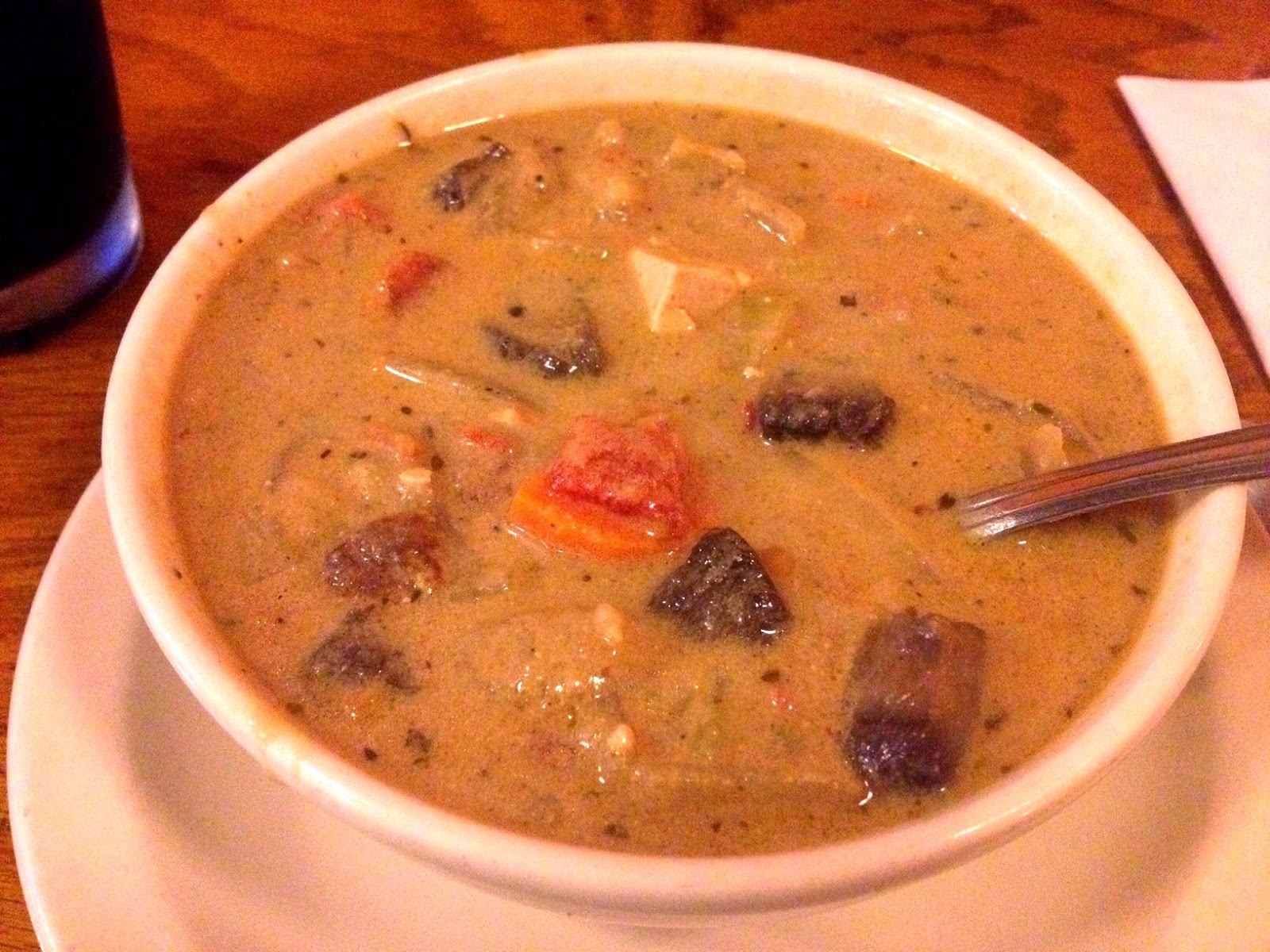 Alright folks. That's it for Friday and Saturday. I'll be back with the final installment in my Seattle series tomorrow night.
Posted by Bianca at 11:02 PM

So much food. I've been waiting for days for the pics!

Vegan Chinese restaurant!!!! I need to get back to Seattle soon. So many great options there.

So many delicious meals!! I love vegan Chinese food and hot and sour soup is my favorite! THe whole meal looked incredible. The mac n yease looks so decadent, yum! I never drank coffee before I lived in Seattle ;) It is so good and your coffee choice sounds amazing! I remember I used to go to a coffee shop by my apartment and grade papers for hours sipping many cups of coffee :)

Wow, that latte is so beautiful! And marshmallow syrup, what a win.
I've seen the Plum Bistro cookbook, it's beautiful.
That also looks like a beautiful soup. Now I want to make Isa's mushroom hot pot again! Yum.

[ Smiles ] I envy you somewhat, because in The Republic of Trinidad and Tobago, we have no vegan Chinese restaurants.

Thanks for sharing this wonderful post, It is awesome.

I cannot believe you were at Bamboo Garden! I live on the next block and they're starting to get to know me when I show up for take-out! I'm glad you liked it there, too. I thought I was giving up Chinese food when I went vegan until I met Bamboo Garden. Next I'll definitely have to try Plum's Mac'n'Yease. Looks divine.

Oh my gosh, I love Bamboo Garden. The size of their lunch combos are crazy!
I ate at Plum for the first time last year, I agree that they do amazing things with food. The mac is so good.
Haven't made it to Sunlight in my Seattle trips, will have to keep it in mind.

Oh my gosh, I love Bamboo Garden. The size of their lunch combos are crazy!
I ate at Plum for the first time last year, I agree that they do amazing things with food. The mac is so good.
Haven't made it to Sunlight in my Seattle trips, will have to keep it in mind.

It looks like you had so much fun in Seattle! You were eating some great stuff, I loved Bamboo Garden and you're right, their portions are huge! The raspberry brownie bite looks delish too, I wish I had one right now.