Last post in the Seattle series! On Tuesday, I shared pics from Seattle VegFest, where I spent the weekend doing cooking demos and signing books along with fellow Book Pub Co authors Ellen Jaffe Jones, Miyoko Schinner, and Alan Roettinger. On Wednesday, I showed y'all what I ate on Friday and Saturday while not at the fest. Tonight, I have pics of Sunday and Monday's meals, plus Vida Vegan Con friend meetups!

After my demo and signing on Saturday, I was famished. I'd snacked on VegFest samples all morning, but it was well past my usual lunch time. Miyoko had figured out that Plum Pantry was nearby. That's Plum Bistro's (where I ate Friday night) casual lunch counter in Seattle Center. I wandered outside the fest with full intentions of hiking a mile to the nearby Veggie Grill, but when I googled Plum Pantry and realized I was just feet away, I knew that would be the lunch spot. 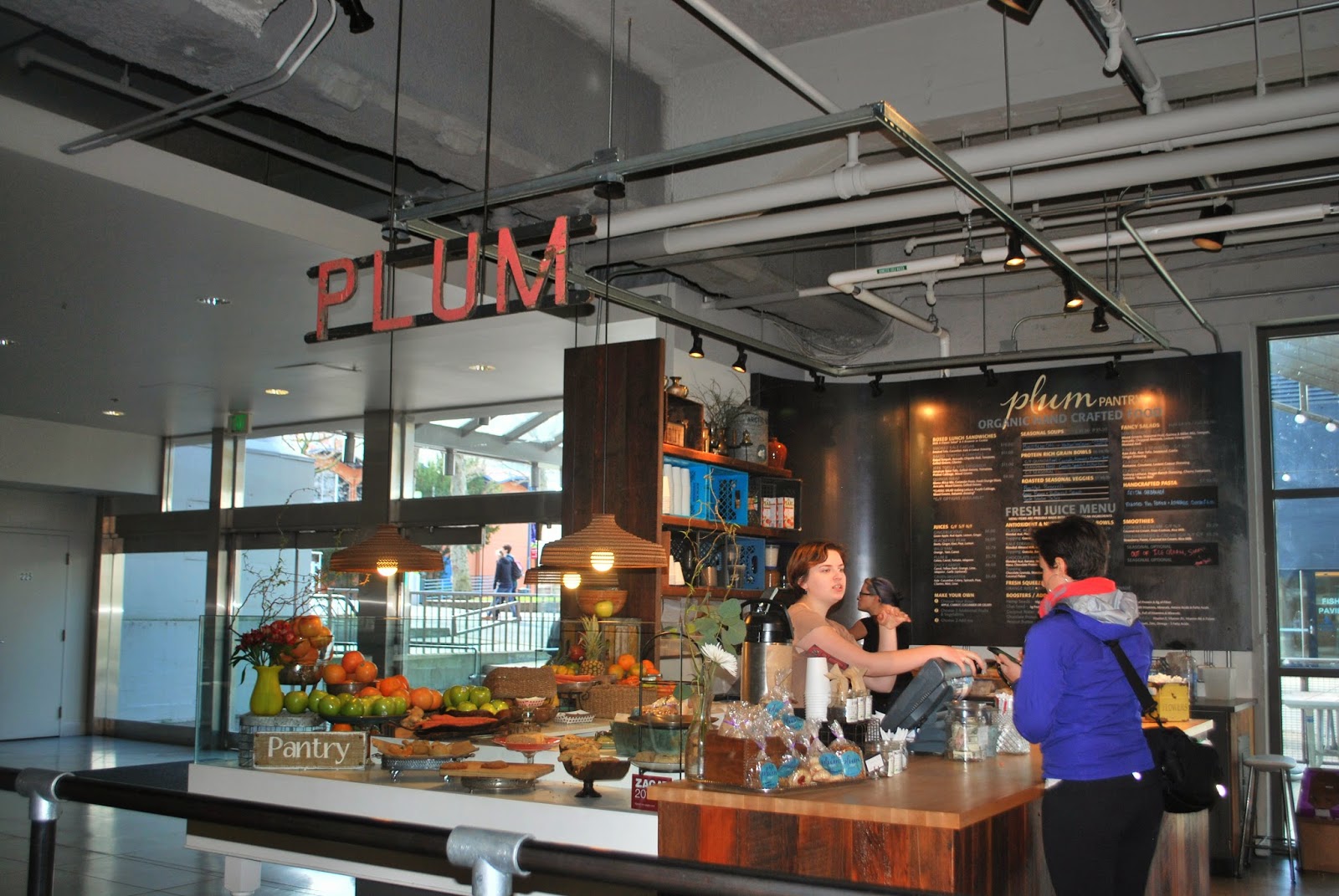 It was in an armory food court inside Seattle Center, right next to the Space Needle. The menu was a bit more casual than its fancy sister restaurant Plum Bistro. There were sandwiches, juices, soups, and a few meal plates. When I saw Crock Pot BBQ on the menu, I knew my decision would be easy — BBQ seitan, smoky mac 'n' yease, collards, and cornbread waffles. 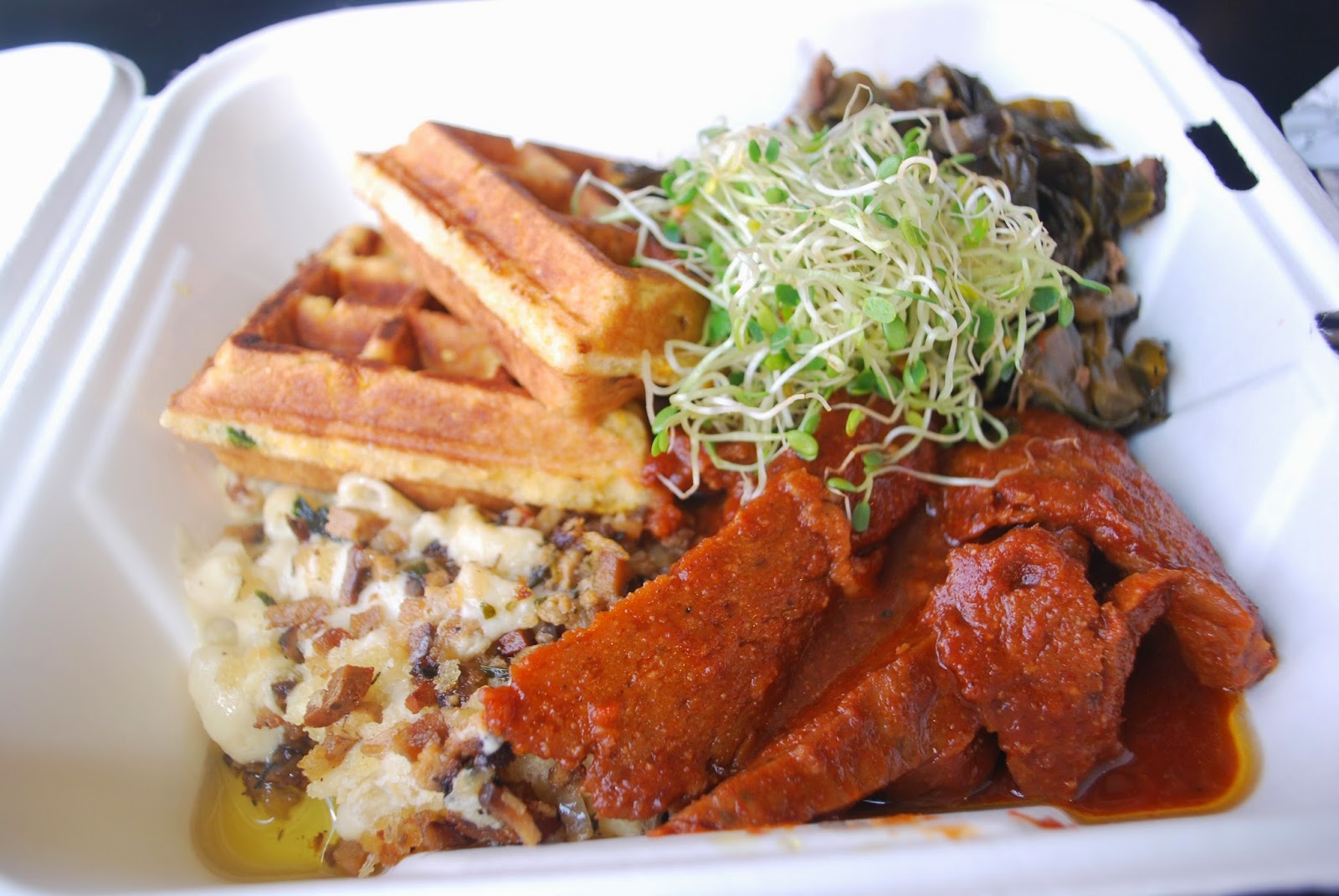 This was much heavier than what I was hoping to eat for lunch Saturday, but it was so good, I didn't even care. I ate every bite (well, I did leave one cornbread waffle). The mac 'n' yease was soooooo good! It was a bacony version, so it was a little different from the Cajun mac 'n' yease I had on Friday at the bistro. And those collards couldn't have been more perfectly slow-simmered.

The reason I was hoping for a lighter lunch was I was planning to meet up with my Vida Vegan Con buds Dawn, Brit, and Tofu Mom at El Chupacabra. Tofu Mom ended up having to cancel at the last minute, so I didn't get to see her. Sadness. But I did get to hang with Dawn, Brit, and Brit's friend Rachel! 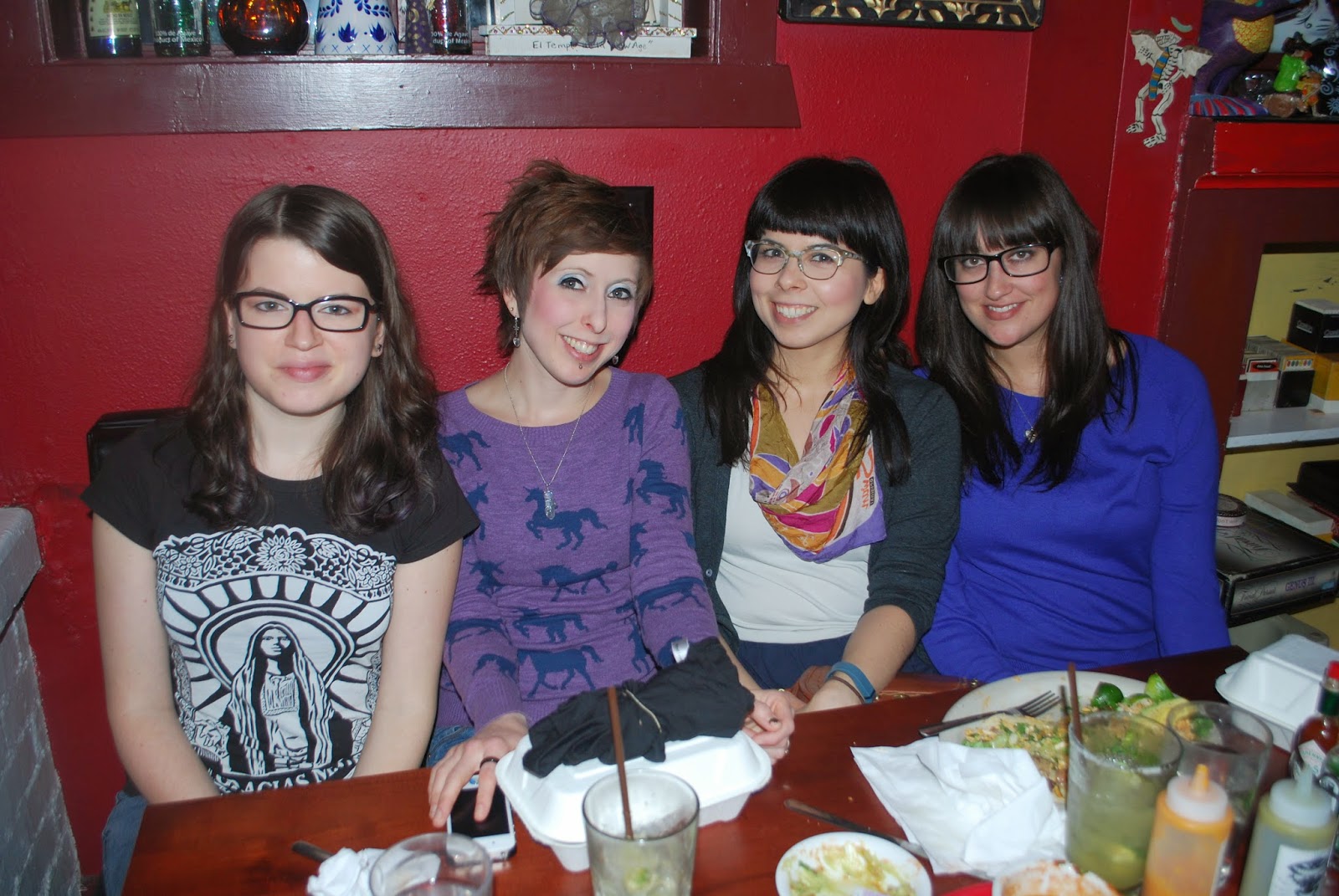 We met at El Chup, a very vegan-friendly Mexican joint. Nearly every taco, burrito, enchilada, nacho, whatever can be ordered with Daiya cheese and Gardein chicken or steak. But of course, we started with margaritas. I had a regular margarita and a Mango Marg! 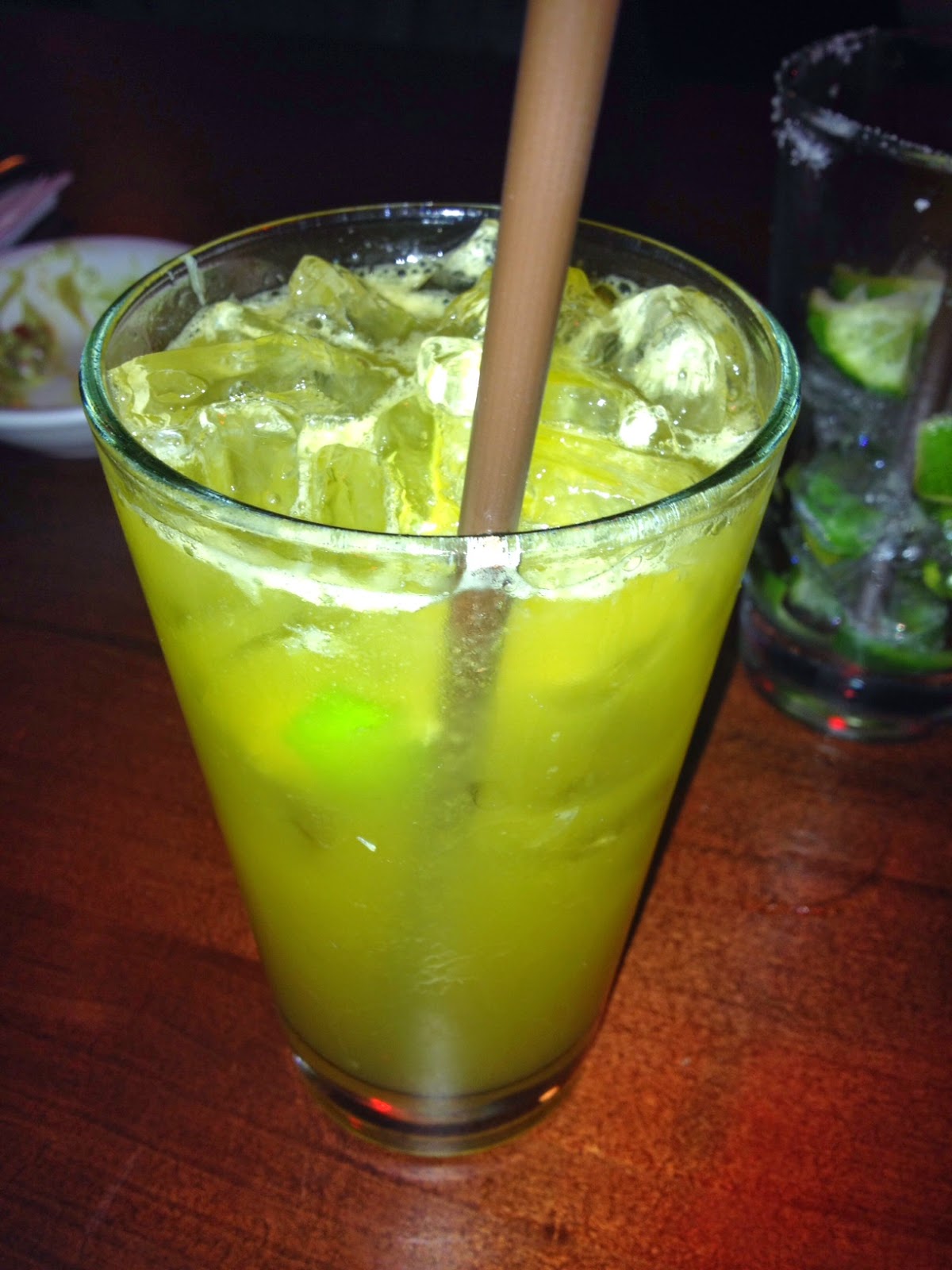 I had a really hard time narrowing down an entree. But I realized I've not had a restaurant enchilada since going vegan in 2004. So that's what I had — Cheese & Gardein Green Chicken Enchilada with Black Beans and Spanish Rice. 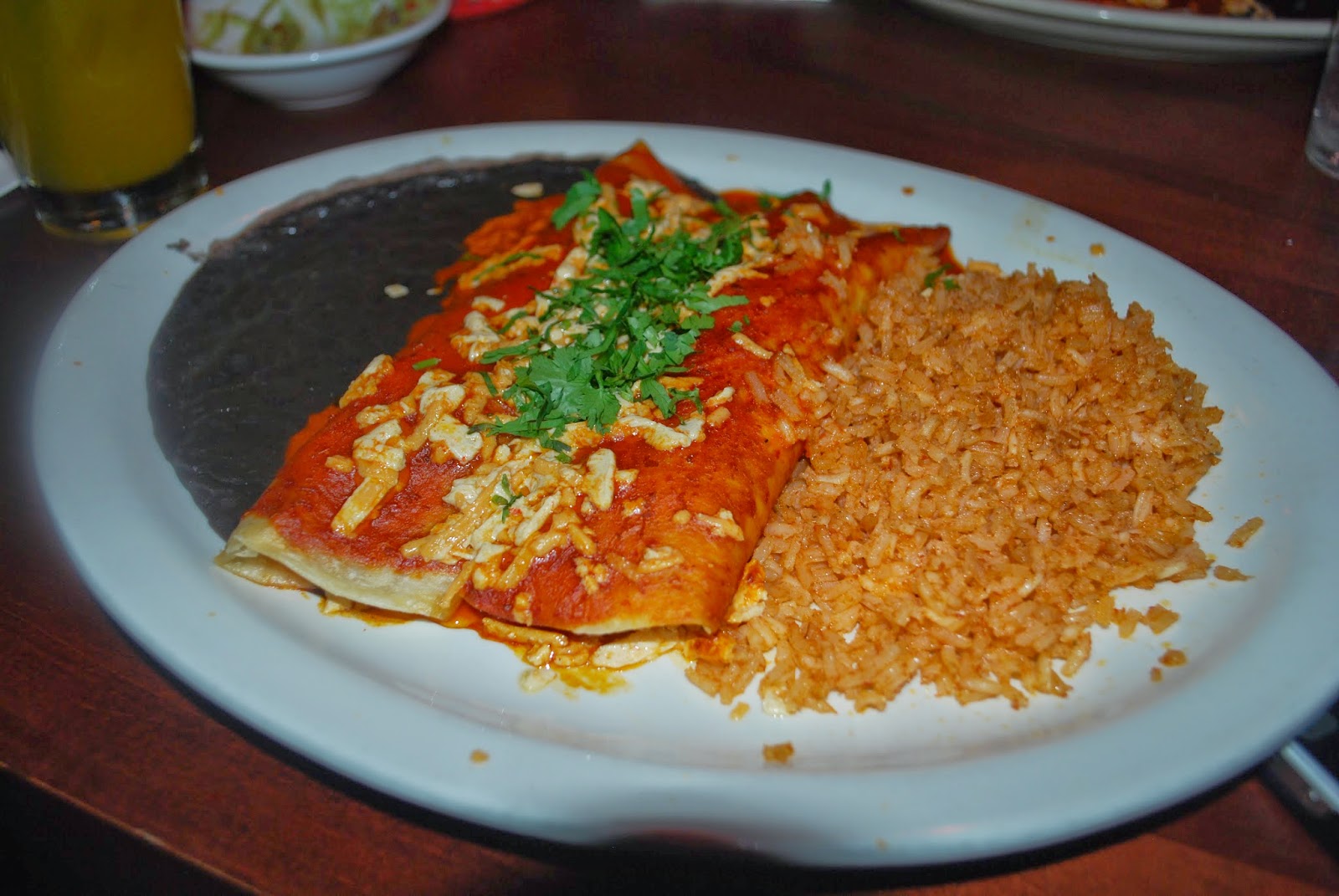 Out of all the wonderful meals I had in Seattle, this one was my very fave! I love, love, love Mexican food. But it's hard to get good vegan Mexican in Memphis! Enchiladas, my how I've missed you!  And same goes for my VCC girls! It was so lovely seeing them again in an Vida Vegan Con off-year (the vegan food blogger convention only happens every two years).

My plane was leaving at 2 p.m. on Monday, so as we were chatting at dinner, Brit offered to take me to breakfast at Wayward Vegan Cafe the next day and drive me to the airport! I couldn't have dreamed of a better way to wind up my trip. Wayward is an all-vegan breakfast diner. Well, they have lunch too. But the breakfast is served all day, and the options are overwhelming. They even have vegan omelets on the menu!!

But after much deliberation, I settled on the Country Fried Burrito — country fried seitan steak, hash browns, and peppers tucked inside a massive tortilla topped with gravy and vegan cheese. And it comes with a side of home fries. Potatoes + potatoes = awesome. 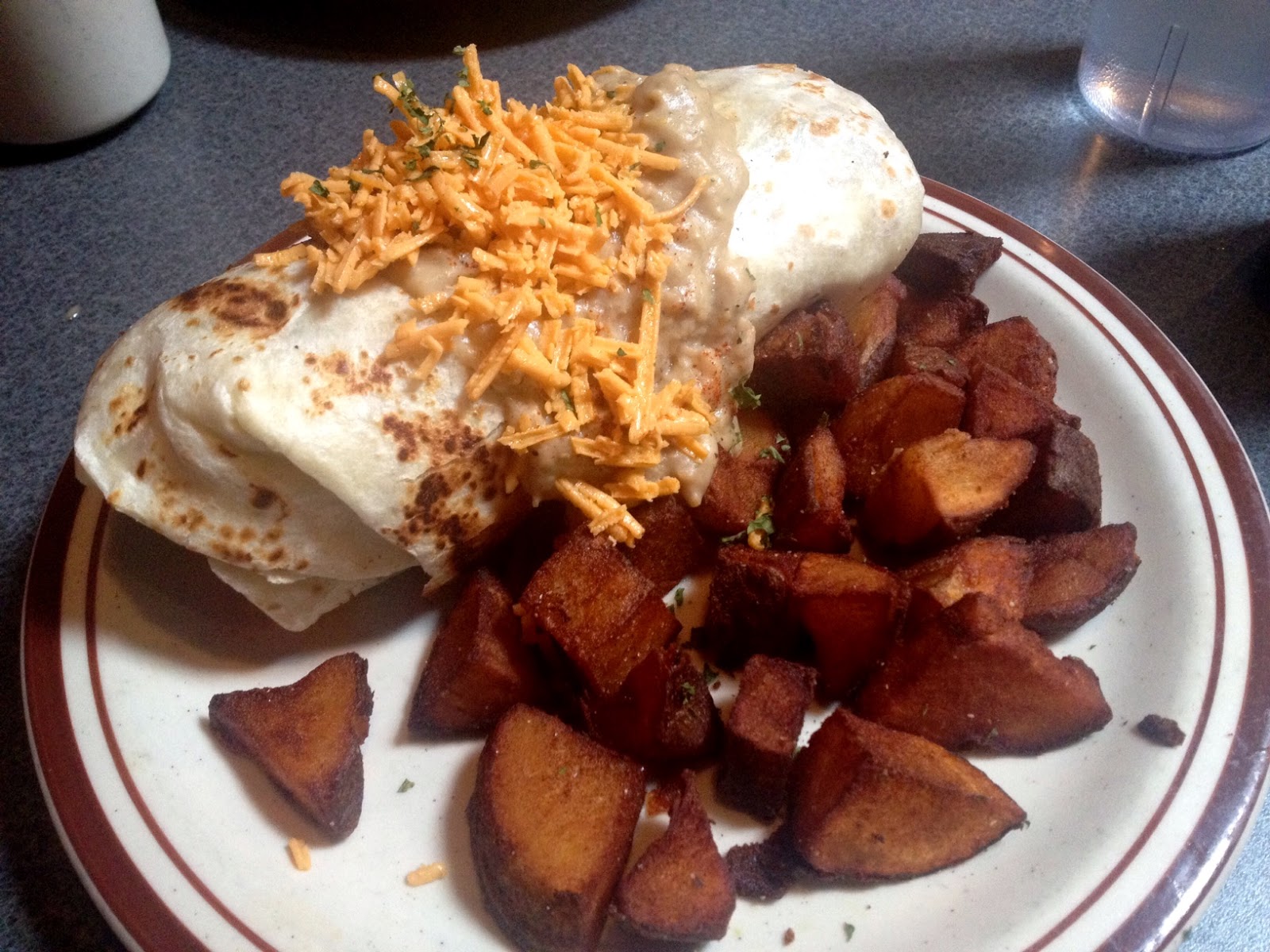 Here's an inside shot. 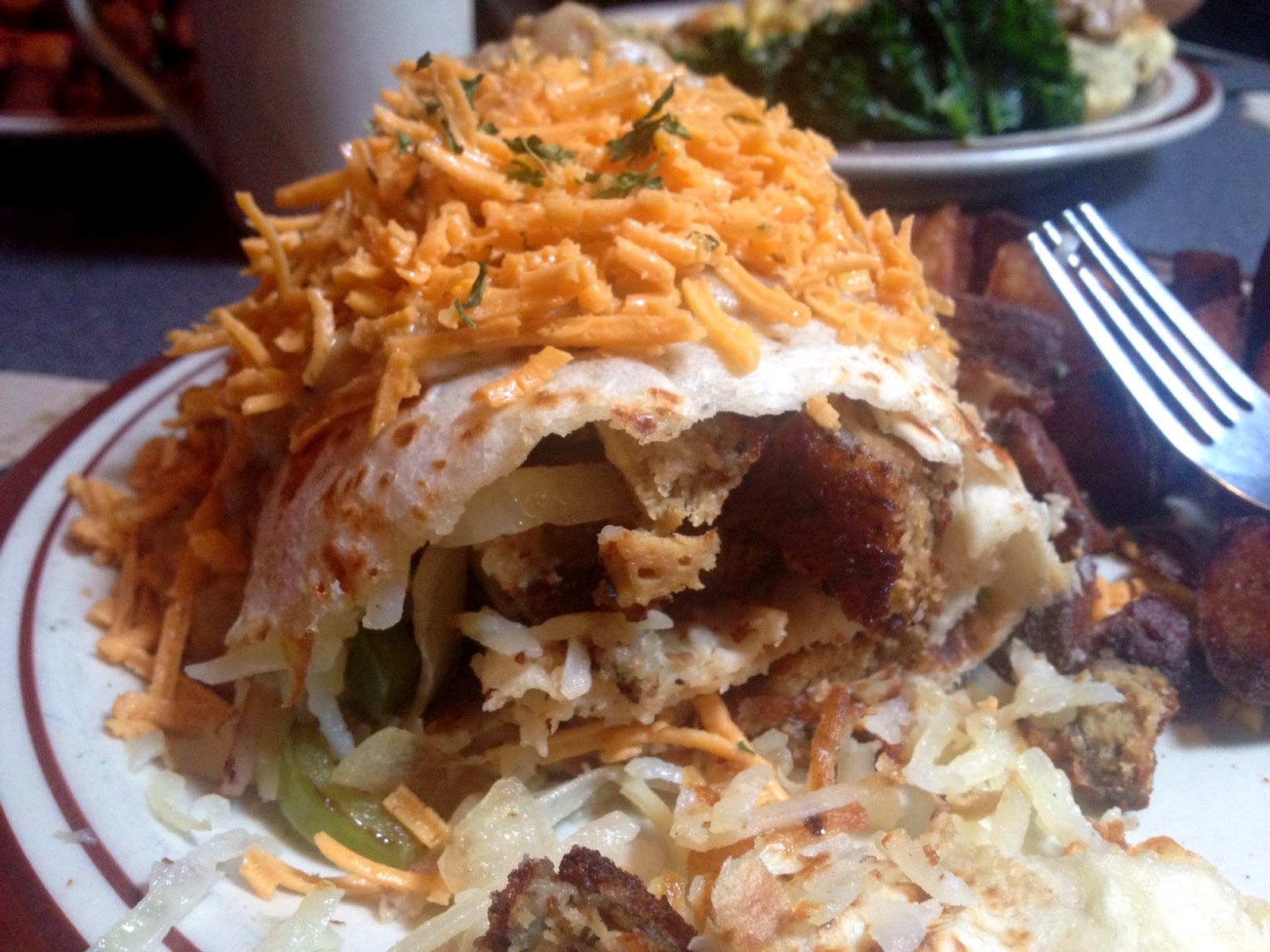 Brit had some delicious concoction with biscuits, gravy, tofu scramble, and kale! And she got a side of taters too. 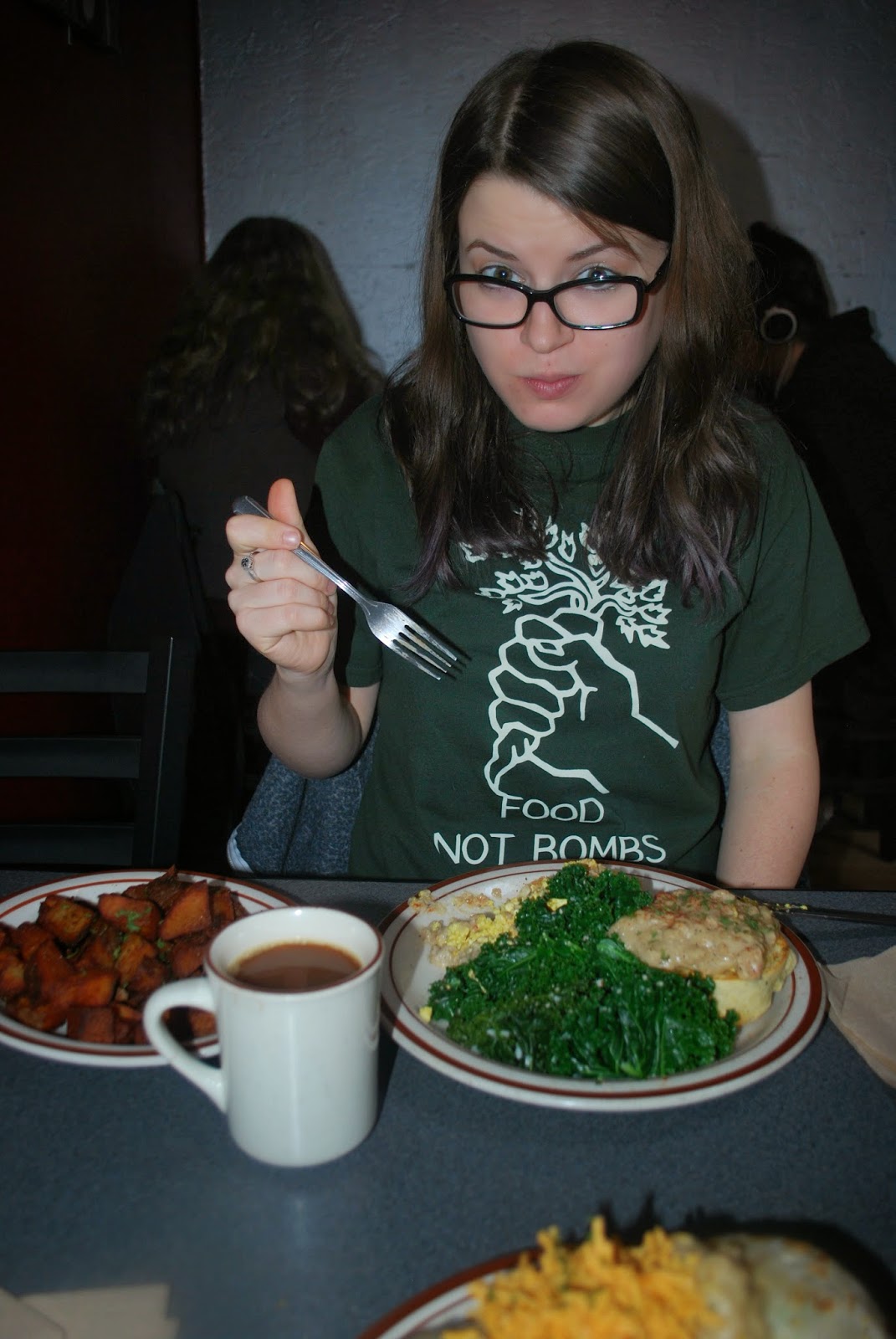 After breakfast, we walked across the street to the all-vegan grocery store, Vegan Haven. It's a non-profit shop benefiting Pigs Peace Sanctuary. I bought vegan white chocolate chips, sriracha maple jerky, and some new Crazy Rumors lip tint. I would have bought more but my suitcase was crammed full. 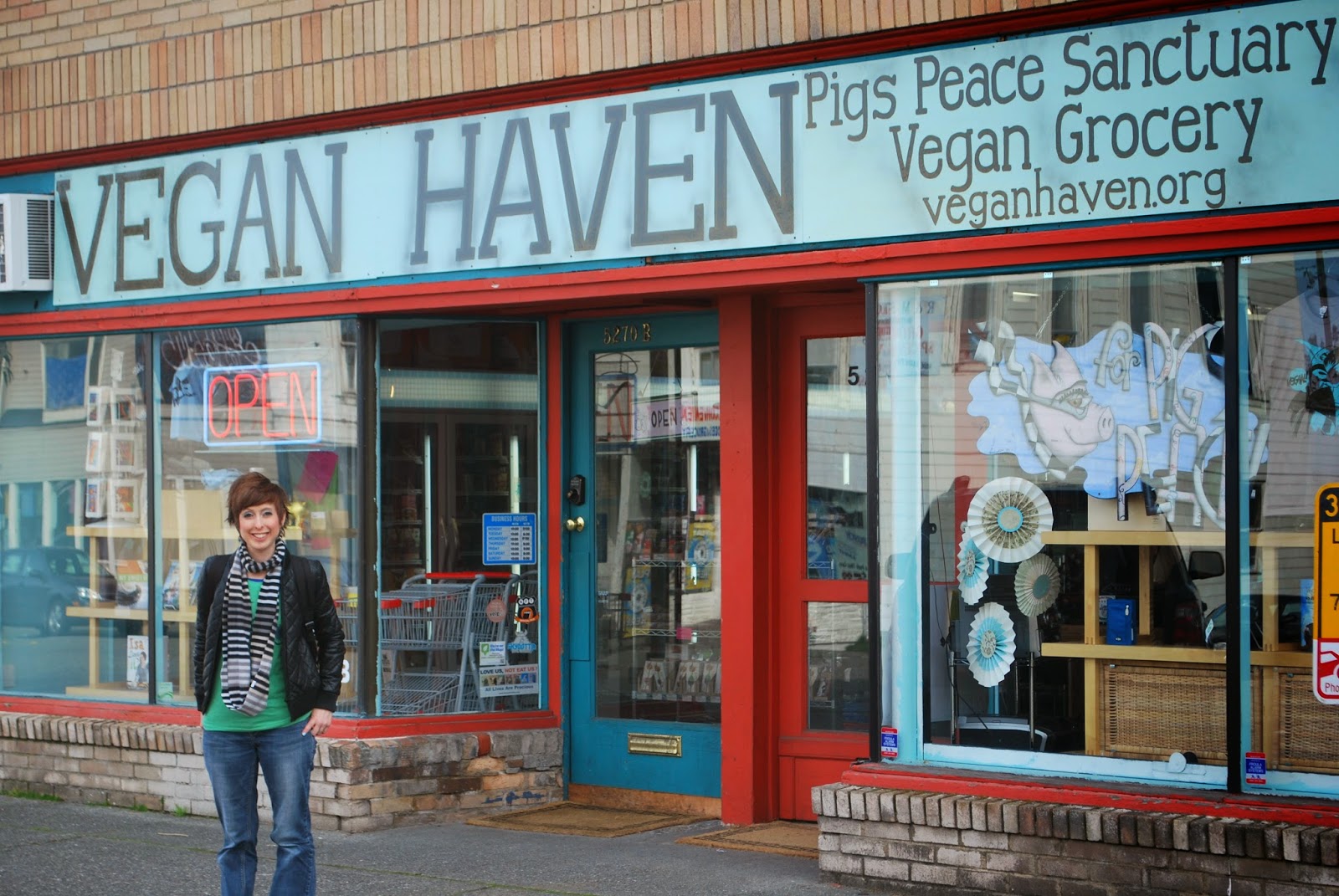 Vegan Haven also sold sandwiches made by the people who used to run the now-closed vegan sandwich shop Hillside Quickie. I had a long flight ahead, so I grabbed a Jamaican Spice Smoked Tempeh Sandwich to eat on the plane. 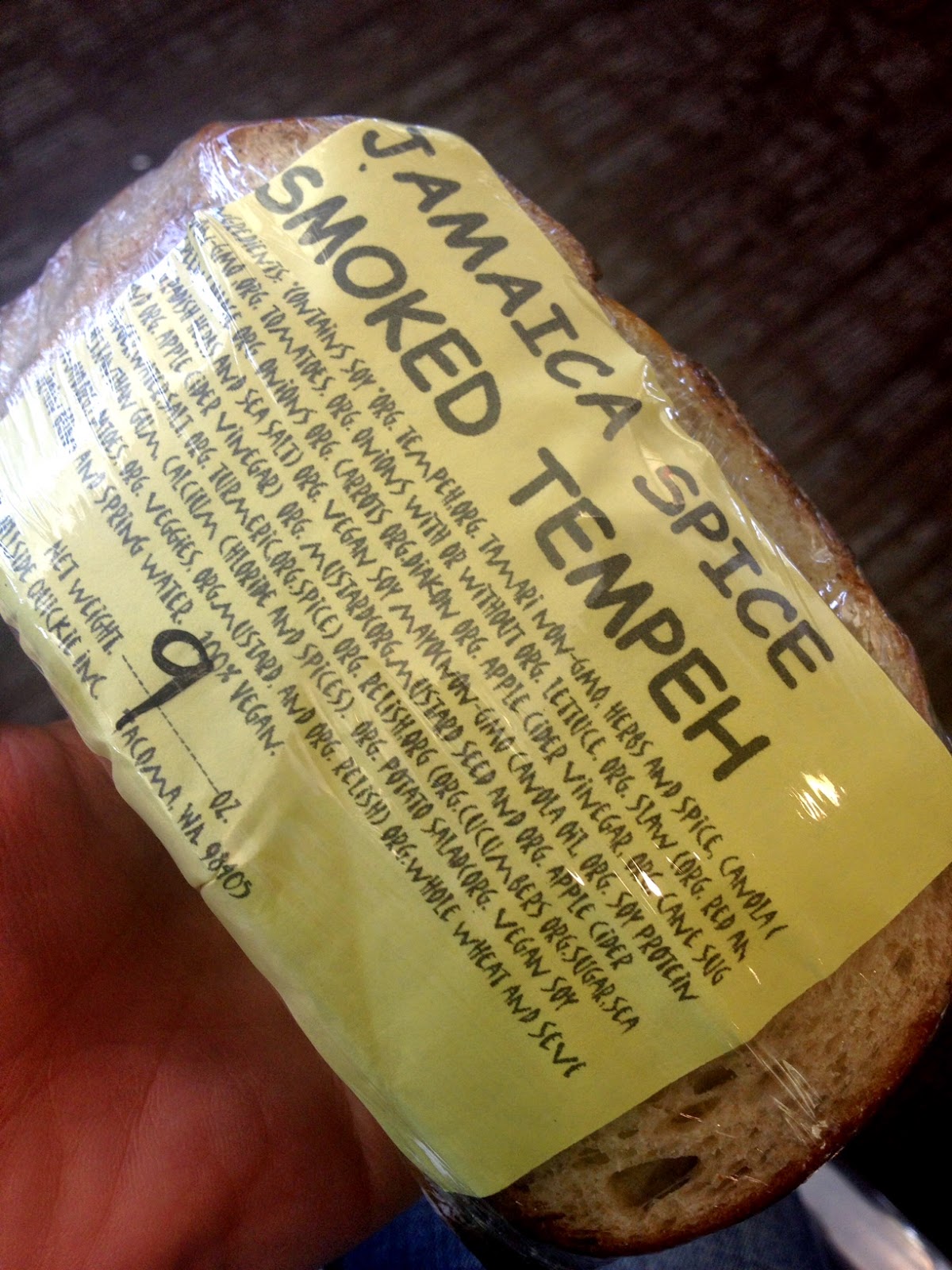 And it was so good! I ate this halfway between Seattle and my layover flight in Dallas. 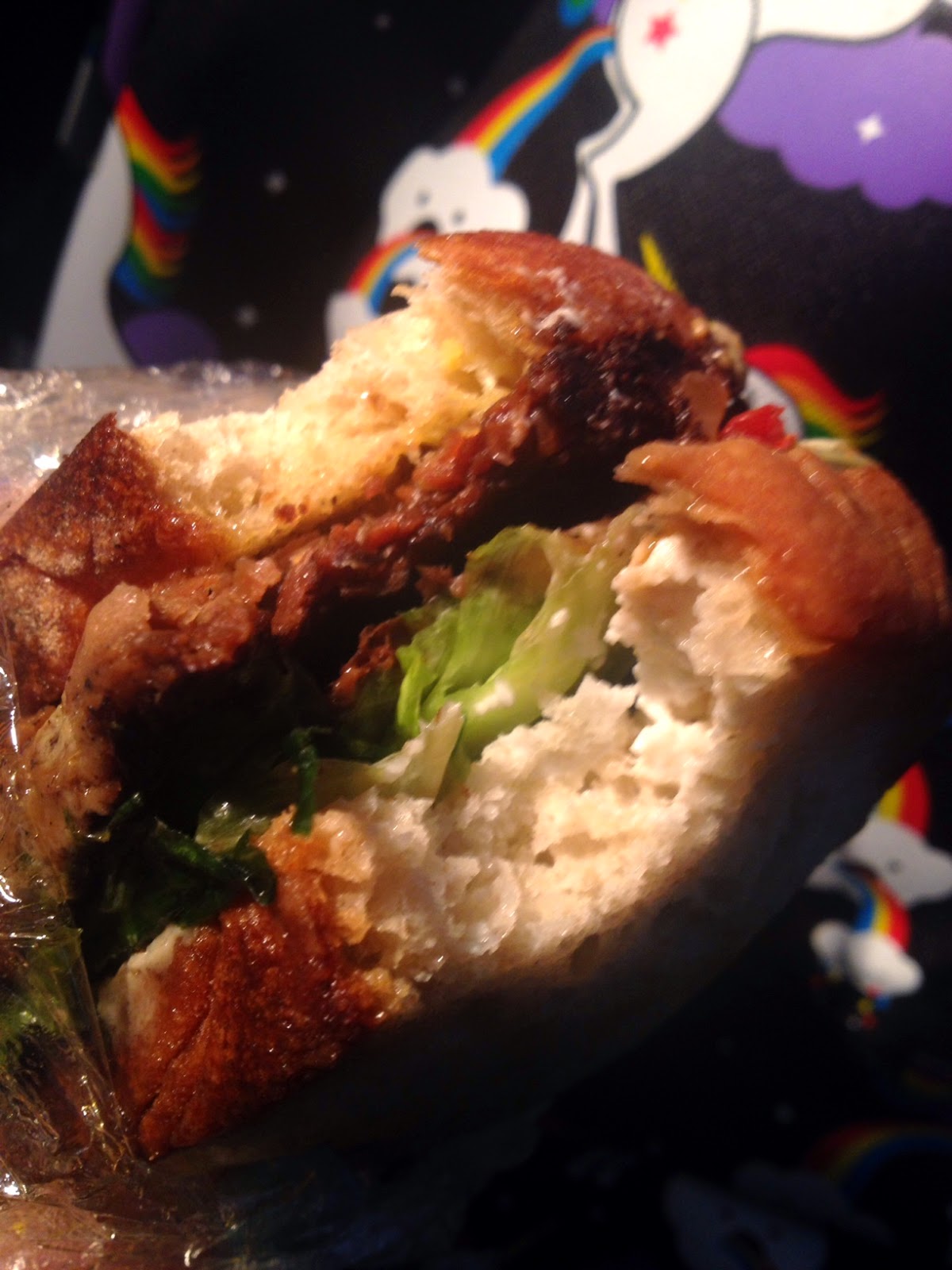 But before I ate that sandwich on the plane, Brit took me to one more stop — the Freemont Troll! This menacing dude is holding a real Volkswagon in one hand, and he lives under a bridge in Seattle. 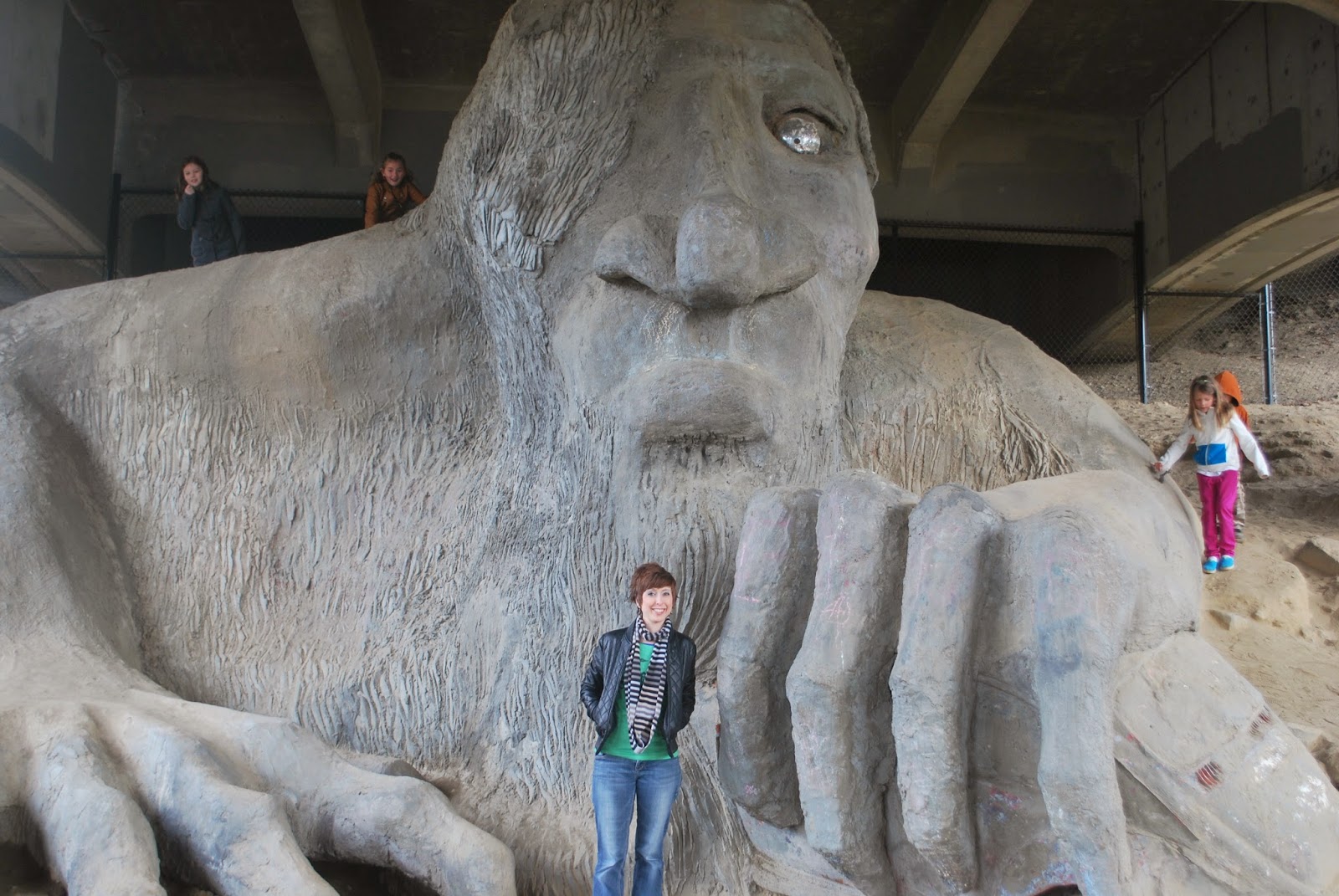 I'm glad to be back home, but I'll cherish these memories of hanging out with Seattle vegan buds and eating magical meals forever.
Posted by Bianca at 11:06 PM

I've loved reading about your Seattle travels! I haven't been back to Seattle as a vegan and it looks like a yummy place to be!

Yay, you got to see the troll! It's such a fun and unique sight in Seattle, I used to love going there with my friends.

Another post with amazing looking meals! What a great picture of you lovely ladies! I had never been to Wayward when I lived there but I always wanted to go. That burrito looks out of control in the best possible way! Aren't all vegan shops so fun?! I could spend hours in them perusing every single item.

aw. your Seattle posts are making me so nostalgic for my Seattle days! So much more vegan food now than when I lived there... lots of good reasons to go back!

looks like sooooo much fun! i am really hoping i can make it to the con next year!

Ahh, dear Seattle...it's been far too long... All that food look so amazing!!

You should check out Rosettas Kitchen in Asheville sometime. There you will get southern vegan food.

Holy mary, that wayward burrito!! Sounds like everyone was super kind, too. I really really really need to get to Seattle now.
I didn't realize VVC wasn't happening this year, though! damn! I need an excuse to travel and eat.

Oh my god, I want to go to Seattle!!! Drew's sis, Kaitlin, lives there and we've been wanting to visit! Now, I already have a list of places I want to go! haha!

I am still SO BUMMED that I didn't make it to dinner with you all! But it looks like you had fun, AND got to see many of the great places Seattle has to offer. We do have loads of tasty food here, I'm glad you got to hit a few of the highlights. (ANNNNND the troll - of course the troll!)
Next time!! (There WILL be a next time, you can't stay away from the awesomeness that is Seattle!)

So much awesomeness in this post, a VVC buddy meet up, fried burrito's, margaritas, vegan haven. I wanna go back to Seattle!