Lots of Stuff I Ate

I've got a big photo dump for y'all tonight. I take pictures of everything I eat, but not every meal warrants its own post. Here's a little photo essay of what I've been eating lately.

I'm still slowly but surely working on my next cookbook, a vegan look back over the past century. Each chapter will be divided by decade, and I learned through a little research that it wouldn't be uncommon for a family in the early 1900s to have a side of Creamed Potatoes with their meal. Now I always thought creamed potatoes were like a creamier mashed potato. But not so. It's actually made from diced, boiled potatoes tossed with white gravy, salt, and pepper. I'm a fan of anything tossed with gravy, so I created this recipe for the book. 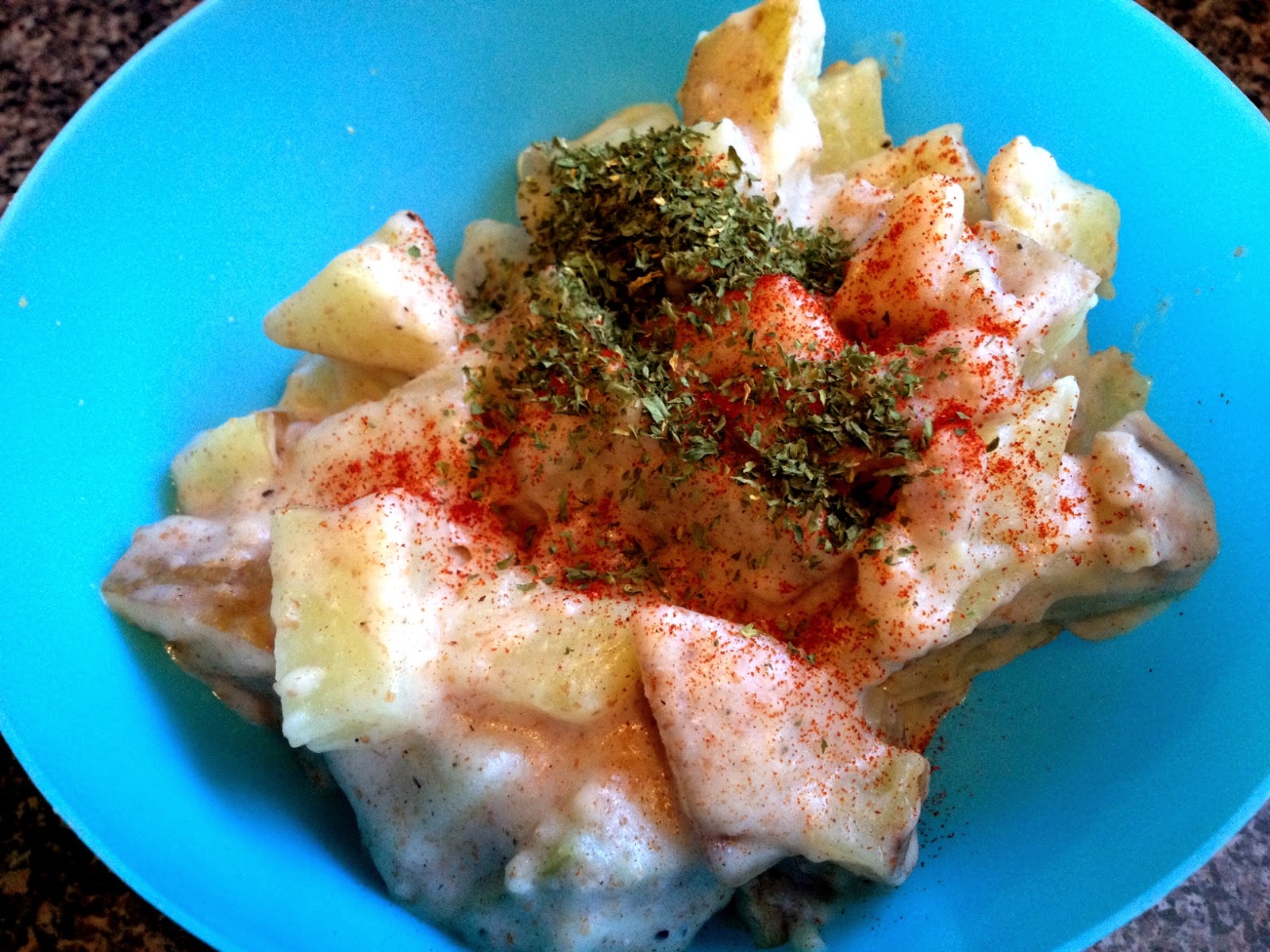 I plan to include my go-to recipe for oil-free Sauteed Kale in the 1990s chapter. That's when kale was just beginning to move from garnish to health food (it wouldn't see it's full popularity explosion until the mid-2000s though), and the 90s were also all about low-fat recipes. Yes, that's sriracha on top. Let's keep those sriracha makers in our prayers, shall we? Silly City of Irwindale. This is how I always make kale! And it's so simple — just water, garlic, kale, soy sauce, mirin, and sriracha. Boom! 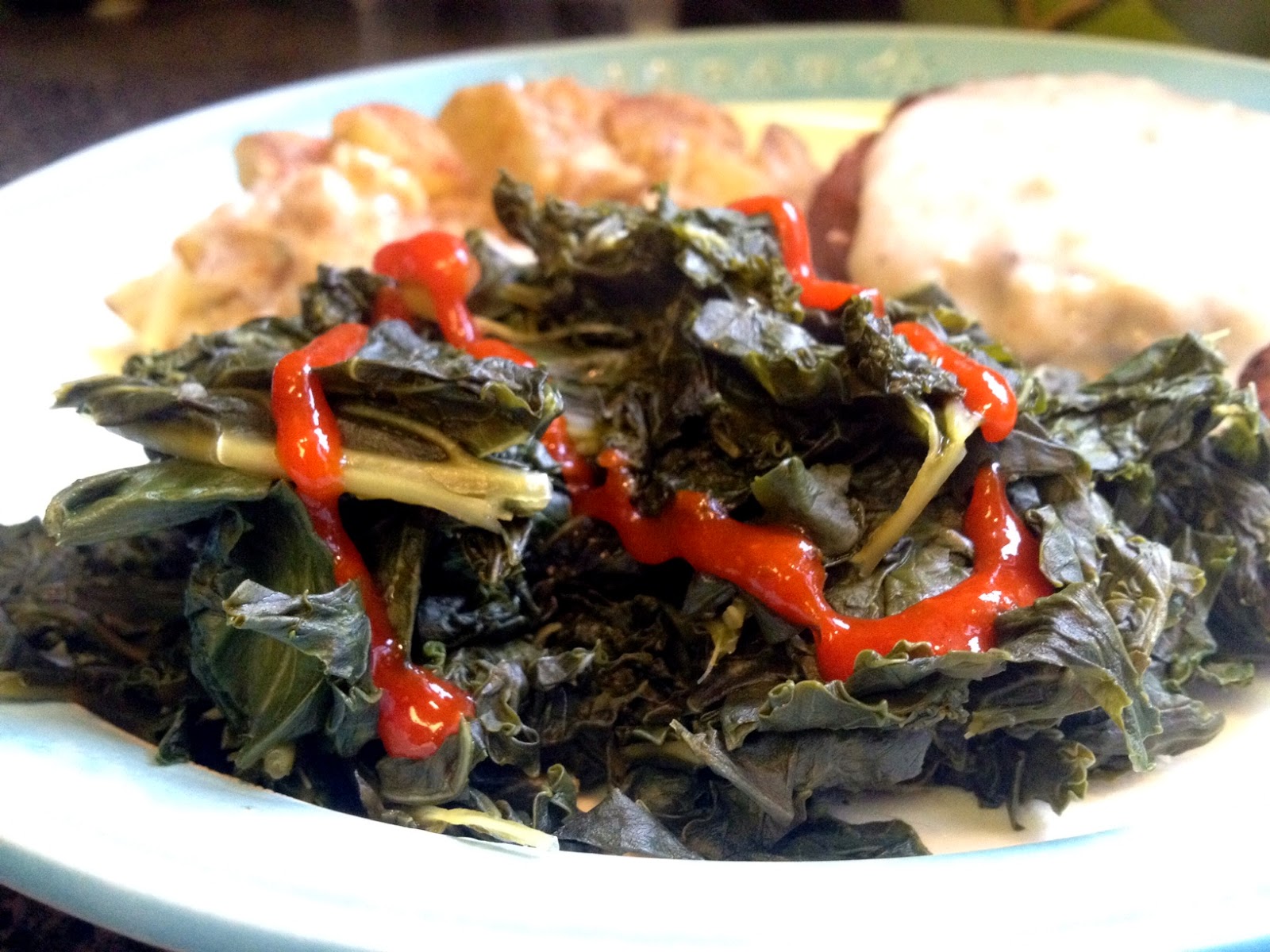 Last night, I ate at my friend Cassi's house. She blogs over at Pretty In Pink Vegan, and she was sent a copy of Wheeler del Torro's new cookbook Fillet of Soul Afro Vegan to review. So she made the Avocado san Crevettes (black eyed pea salad with avocado-yogurt dressing) from his book and invited me and Aisha over to try it. And she made perfectly chewy Chocolate Chocolate Chip Cookies. And we had wine. By the way, Cassi is giving away a copy of Wheeler's cookbook on her blog. Check it out! 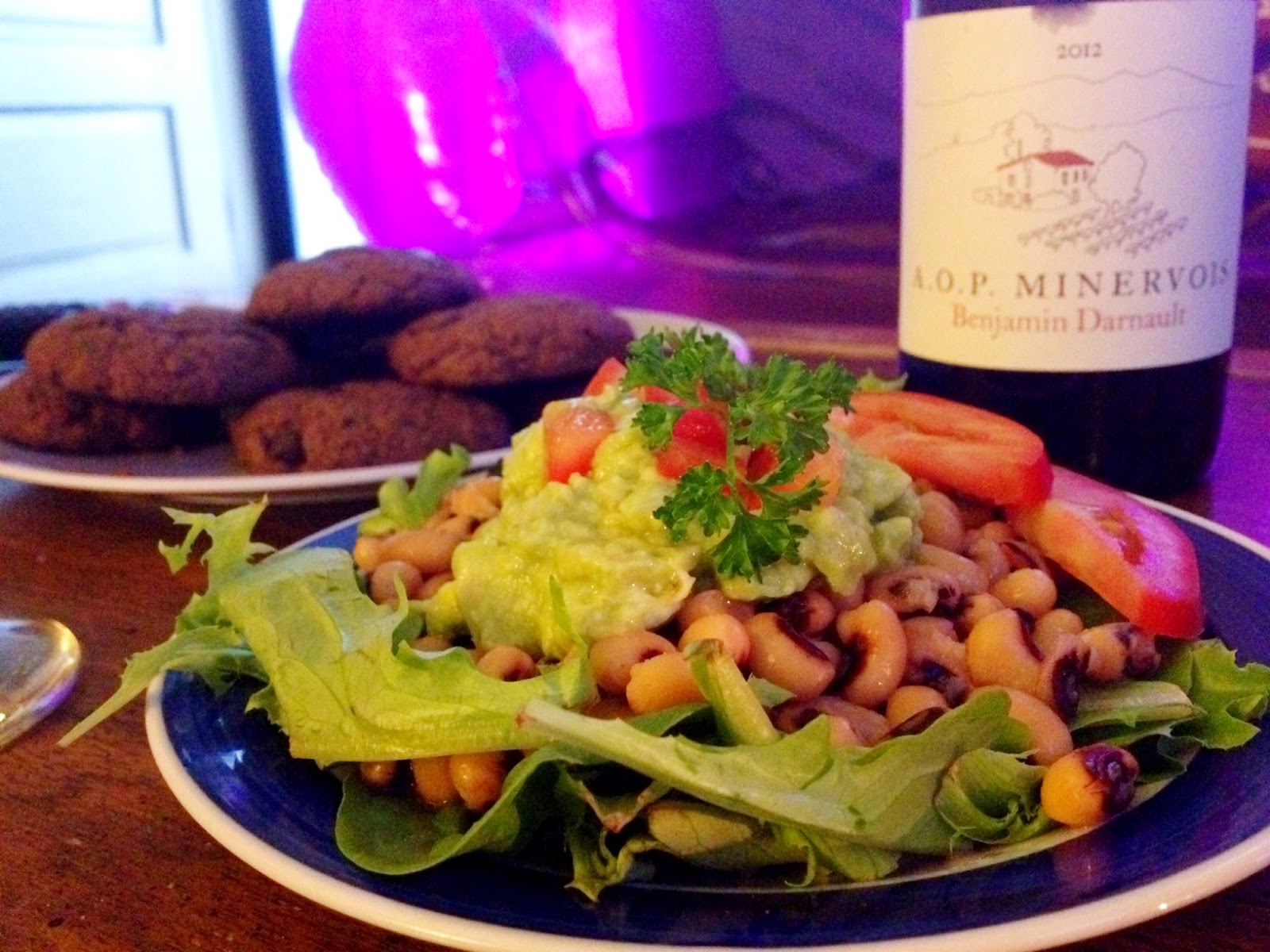 Here's a really crappily lit picture of my British breakfast this morning — Beans on Toast (Heinz Beans in Tomato Sauce over Ezekiel bread with Earth Balance and nooch). I washed this down with Earl Grey tea, like a real lady. One Sunday, I was slightly hungover and craving falafel because falafel (and veggie fried rice) is the ultimate hangover food. Sadly, there was nary a homemade falafel in Midtown (all the locally owned Middle Eastern joints were closed or out of falafel). So I was forced to try the Pita Pit for a Falafel Wrap. Fast food, yes. But much tastier than I expected. And it cured what ailed me. I loaded this wrap with all sorts of veggies, plus hummus and avocado spread. While we're on the subject of handheld food, I have to tell y'all that I am LOVING the Tofurky hot pockets. This is the BBQ Chick'n one! Imagine Vegan Cafe was selling these for a time, but sadly, because they've not enough cooler space, they've stopped selling them. 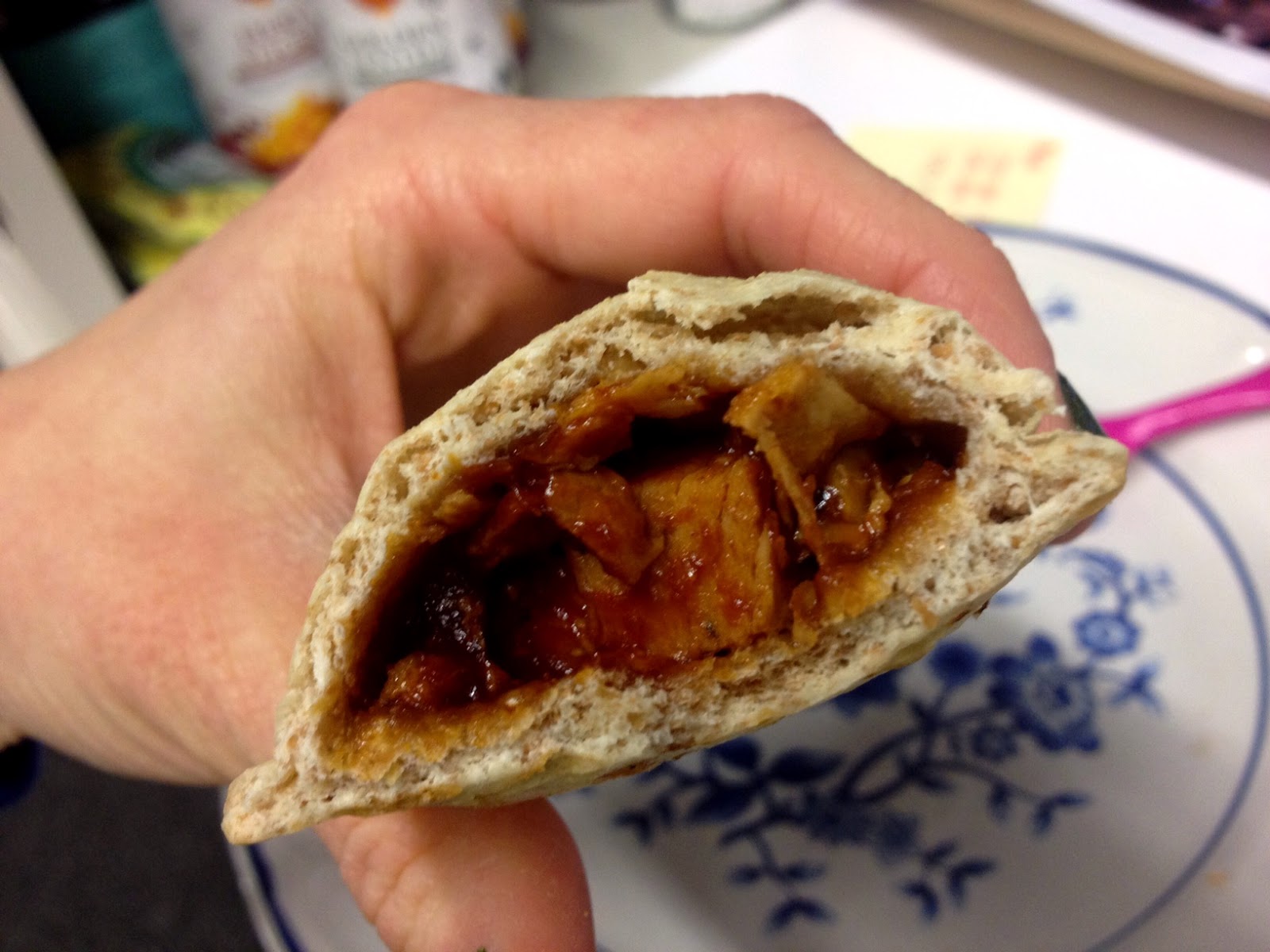 Imagine also sold the Tofurky Chick'n Pot Pies for awhile too. But they also took up too much freezer space (they need their freezer for the food they serve there rather than these to-go items). I'm glad I got to try one of these while they lasted. I love pot pie, but I'm really not that into making homemade pie crust. It's such a chore. I loved having this one already made for me. And it had that classic microwave pot pie flavor. 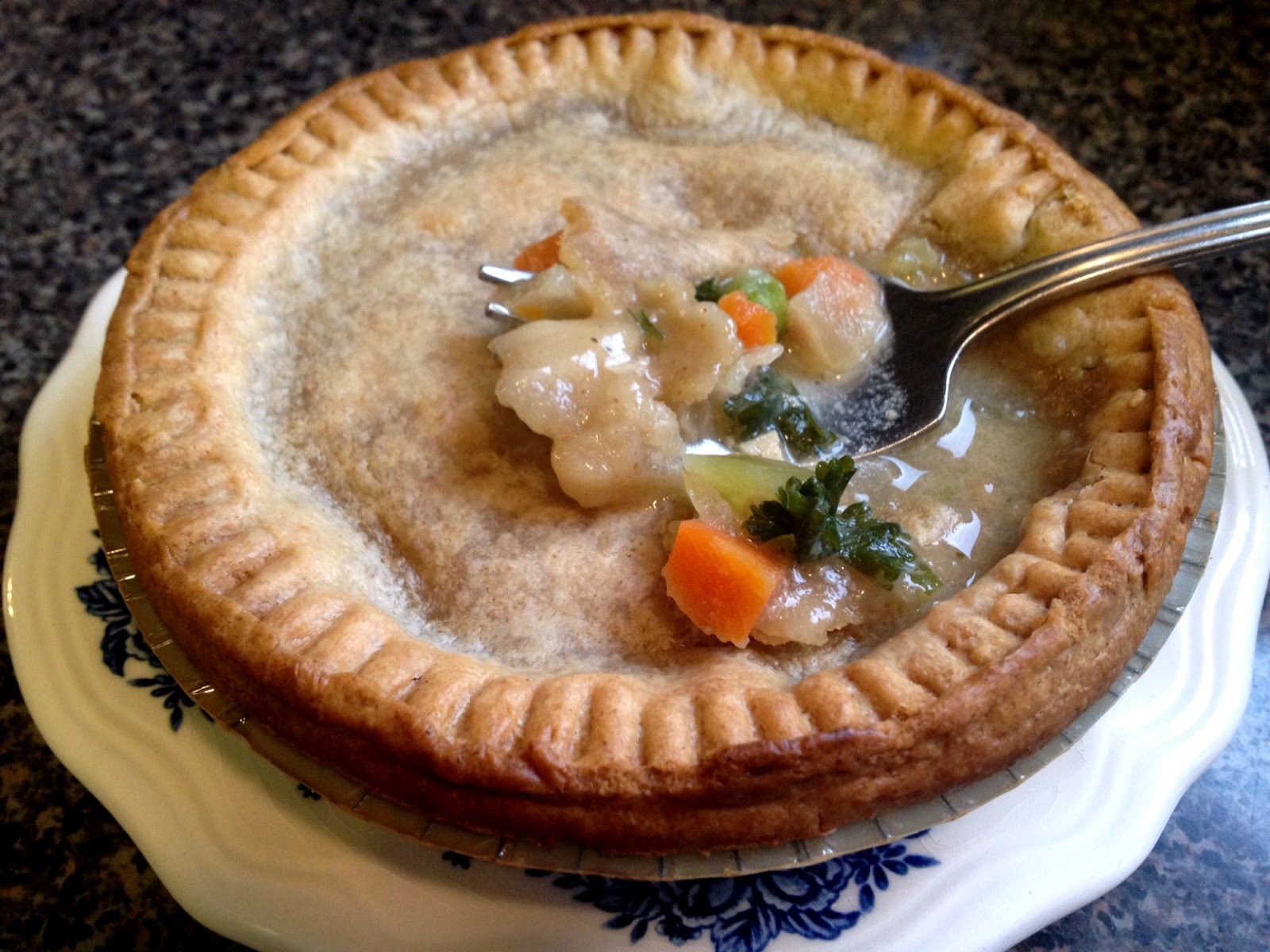 Last week, on the first day back after my Seattle trip, the only dinner in the world that made sense was a salad from the Whole Foods bar. I needed this! (And yes, I had to sneak in just one tofu chicken nugget - upper left corner). 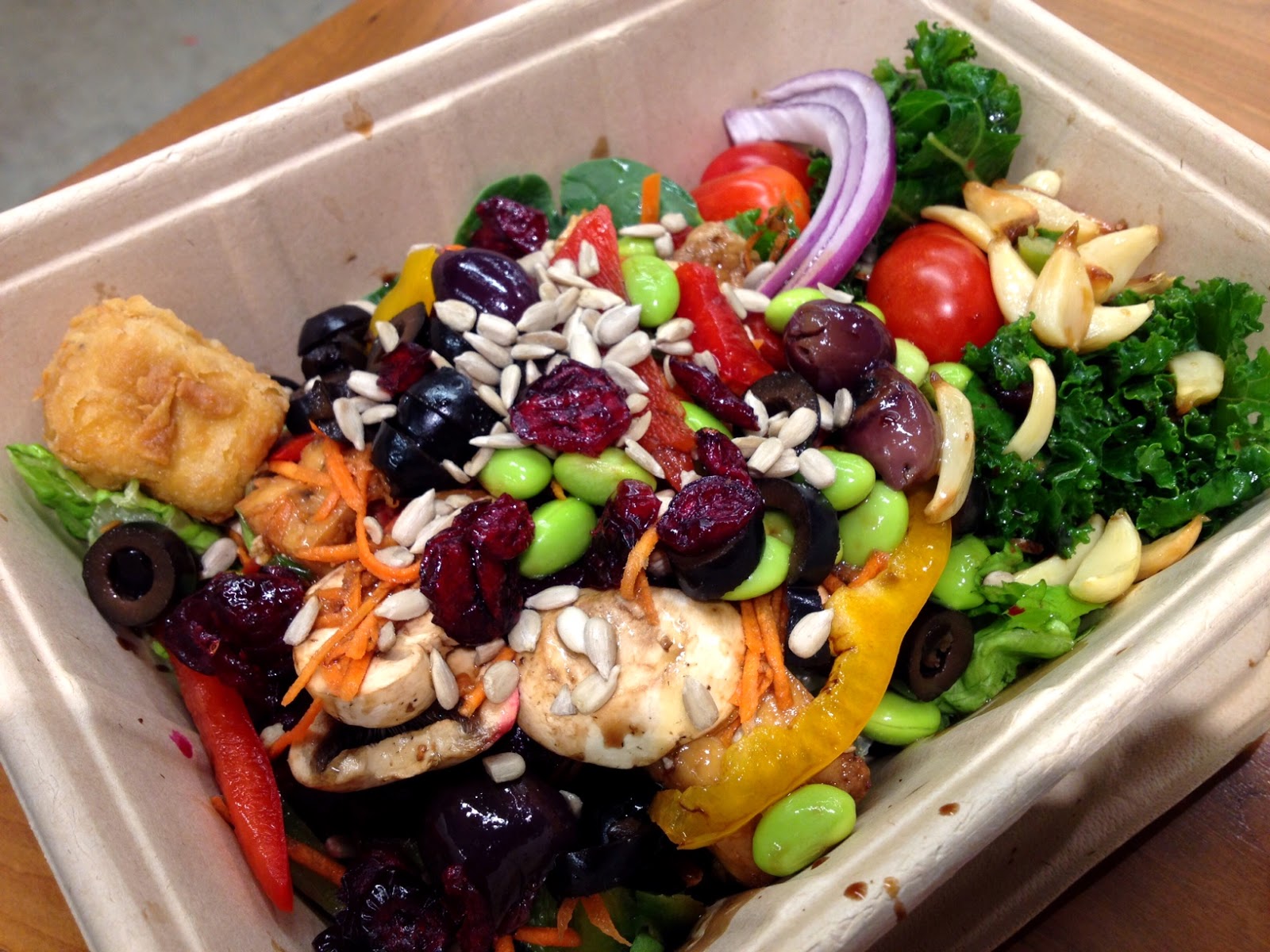 And finally, I leave you this picture of Jalapeno Stuffed Bacon Wrapped Dates from The New Chicago Diner Cookbook. Dates wrapped in Upton's Seitan Bacon. So very, very good. Been snacking on these all week. 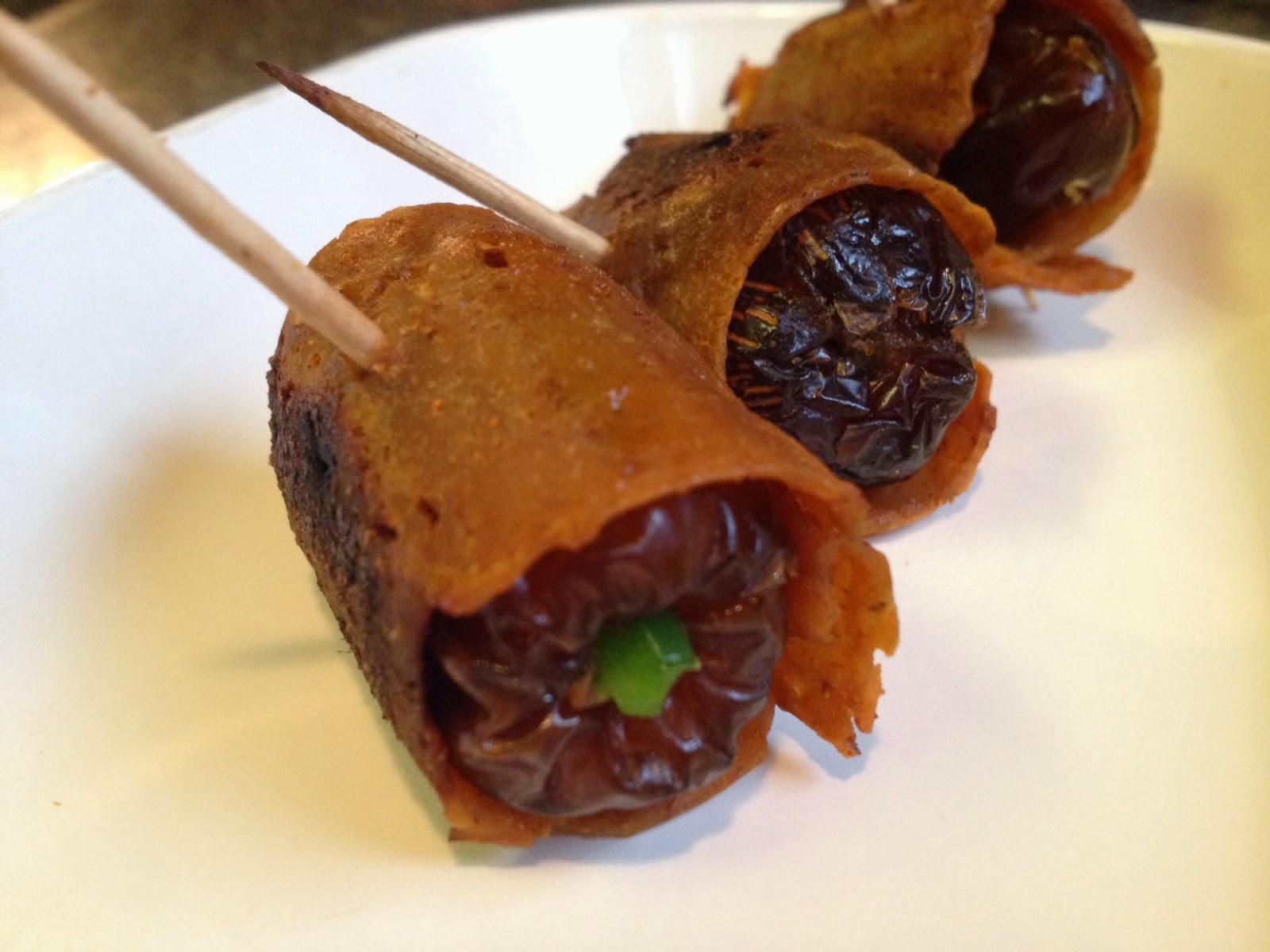 Yum! I made you mandarin orange cobbler for the first time for my birthday "cake" and man is that good! Have you ever made it with other berries or fruit, I'm going to give raspberries and blue berries a go when they are in season!

Haha, I was forced to try Pita Pit one time myself! My friend Britney and I were on our way back from the Grand Canyon, and were staying in Flagstaff. Before we hit up the bar at the haunted hotel, we needed some food! Pita Pit was all that was open (that we could eat) and I was surprised by how much I enjoyed it!